Beyond the Sea // in conversation with Heloisa Hariadne - Bubblegum Club

I believe that the sea will always be an inspiration to art; it is vast, great, and mysterious. Those who venture out into the unknown and cross over are brave, but what about the other side? What lays waiting there? Beyond a division of the skyline, the meeting of the sea with the sky is magnified. Beyond the reflection that is caused on the outside; the sea is a space that allows for great internal reflection. What has the sea brought me? Perhaps, it has brought me here. Visual artist Heloisa Hariadne is 21 years old and was born in São Paulo, but in 2019 went to Rio de Janeiro to paint at sea. Drawing has always been a part of the artist’s life, growing up her first drawing lessons in childhood were through drawing a friend of her grandmother. What drove her passion to seek the unconventional and follow an artistic path, was the knowledge that there are people who teach art and find it valuable, those whose lives are ignited by its beauty and who talk about it and study it. From then on, it wasn’t very difficult to follow the path of studying what she admired so much. 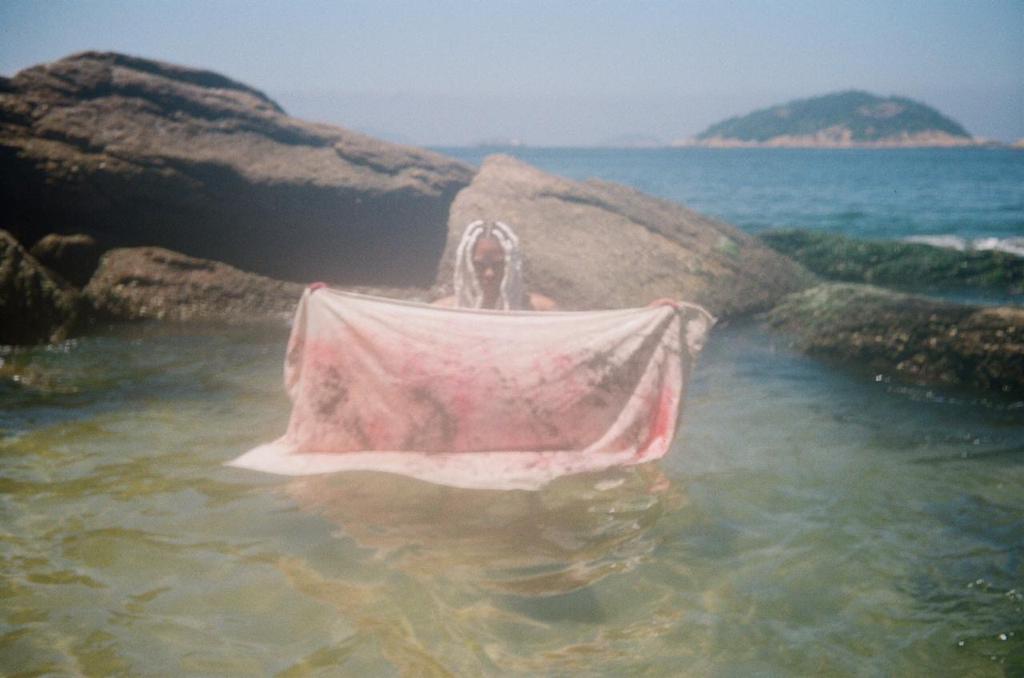 Heloisa entered art college and her first year is when she started painting; this was her first “formal” contact with contemporary art. Along with her academic background, Heloisa began to look beyond the university walls for the current production she was eagerly looking for and it was by seeking people who resonated with her, people who did things beyond anything she had ever seen in class, that she found it. Maybe that is the beginning—of what we can call here—her beginning; something that Heloisa herself says is endless—where her production and art are concerned. In conversation with myself and Bubblegum Club, Heloisa Hariadne answered some questions about her work, her life, and her way of seeing and thinking about the world of contemporary Brazilian art. Heloisa’s work breaks down barriers in the artistic space that are both physical and social and which call into question stipulated methods of art production. Her work embraces, and is included in what we call contemporary art. Hariadne’s work is rooted in research that is varied and impulsive; the curious and attentive look of those who want to see/sea the beyond. The look of discovery.

The temptations that storms bring, forcing me to look at myself, 2018

How do you change something that’s already legitimated and create something new?

The old painting passes on the vision she’s already finished and that’s the point. People have stopped experimenting. I understood that a lot. You can talk a lot about experimentation in the arts and inside the academy. [We need to] talk more about experiences, because life changes. We live from experiences but it’s all left very loose because we’re [too busy] thinking of a final construction. And when I think about painting, I can’t see an end to it. Create something, give something to the world, or to someone, make something of yourself. In doing this, somehow you go against what is already established and start creating micro-experiences. The new is possible by the exhaustion of the old. It’s breaking the art into itself.

The body is a recurring figure in your work, both in your paintings and engravings – and even in your performance. What is your relationship with and thoughts around body poetics?

Lately, I’ve been giving myself more to painting. I’m seeing how serious the [crisis] of identity our bodies endure in the world really is. If you don’t have a history then you don’t really know where your ancestors went and how far you yourself can go. I think how rich it would be for me to have a construction of identity already given, but since I don’t have it, I see a lot of potential in creating from scratch. I keep painting compulsively, as a way of “inheriting” myself.

You say your artistic process is based on what you see. When making works at sea and even with all the movement of contemporary society, how do you see the studio space today?

I have a hard time with the studio, how to use the studio. Since I like to do big things the space limits me. You can’t bring the sea into a studio. So I started to think of the studio as just a possibility of materialisation or even study. It’s a lot of organisation and at the same time not necessary. I think these things and these processes that involve these dissenting bodies are outside. There’s no way to imagine me, traced, imprisoned, alone and painting. I wouldn’t paint anything. I wouldn’t be bringing reality into myself. If we don’t see each other, we do nothing. I think the studio is just an extension.

Both the record of an action and video art were explored during your work on the sea. What is the importance of a video record for this work? In this case, the record stands out more than the work?

I don’t know if it stands out, I think one thing leads to another. If you think of your work as video art, it will stand out as video art. It will exist as video art, but when it doesn’t leave this place and you think only of the record, it ends up being the same. You just want to register that moment for yourself. I started thinking about video because it’s something that can be timeless. It’s pure technology, I’m going to put it in a file that’s in the cloud, that’s here, that’s there. This place of technology for me is surreal! You create art at this moment, you bring several reflections, and technology is very present in this form of insertion. It’s very fast. I’d say it starting from a desire or a need to show, to explore and now it’s fallen into the question of need and I’ve been thinking about it a lot. “Do I need to do this, do I really need it?”. When material—even just a part of it and only it—can give me what I need, then I use it. I see the video as a part. This was the case with the sea, I needed a record so I used video. 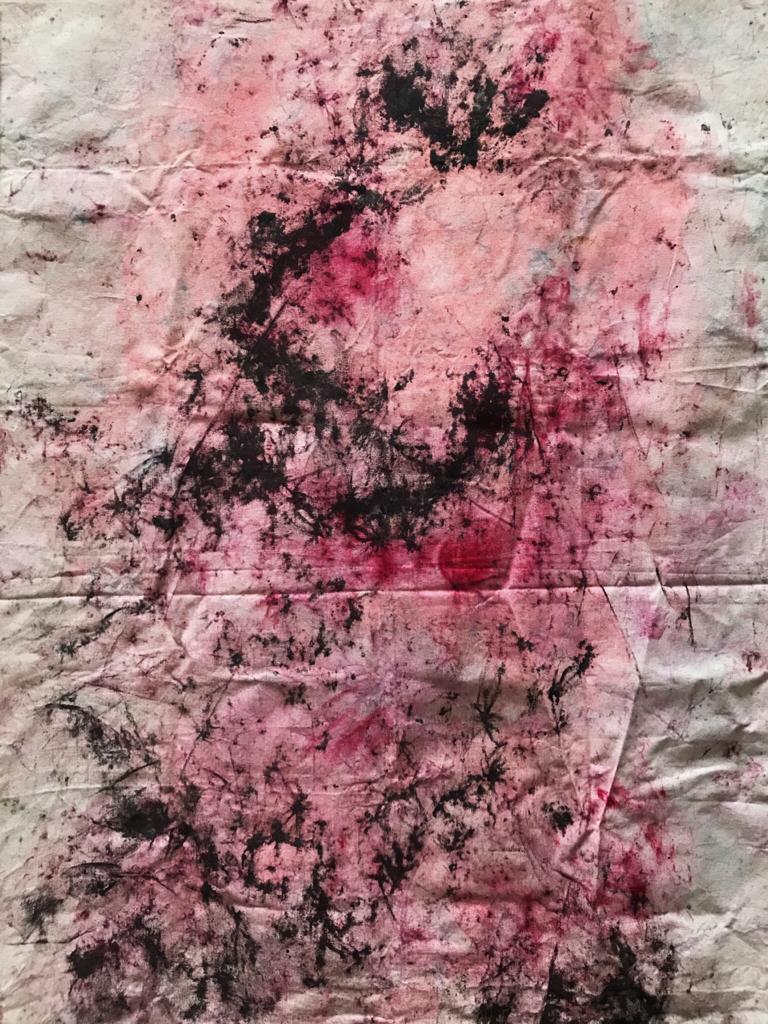 What was it about working with the sea? Why the sea? Where did that impulse come from?

So, totally [bizarre], it’s not even logical. I called a friend who lives in Rio de Janeiro and said: “I need to paint in the sea, will you let me stay at your house?”. I arrived in Rio de Janeiro on Friday and on Saturday I was already painting by the sea and she was already registering me [in school]. It was all very quick, I just had the will and did it. It seemed unbelievable to have this possibility and I was shocked. After I stopped to think about some things that I had already done and there is a lot of that in the work. The rescue, the longing and missing, the revisiting. I kept thinking about that and how it was totally impulsive and only governed by will. That’s all. I saw the power of the work. The work itself deals with issues that are not only made manifest in the painting but also through the water from the painting itself and the impression of the stone on that. That left a record on the canvas and the video recorded me being part of it. How incredible it would be to just be part of something as big as the sea! Nature is a huge part of my process, it is very present and it needs to be revisited time and time again. That is very much the question of the sea. It exists, it’s there and it’s so big. So much happens there, so much has happened and yet it continues. It’s one of the few things you can’t tame. It’s a lot of the lack of human dressage. You can train yourself, you can train “the Other”, you can make big impacts but with water that doesn’t happen. The sea resists this taming for its water does not come and go. 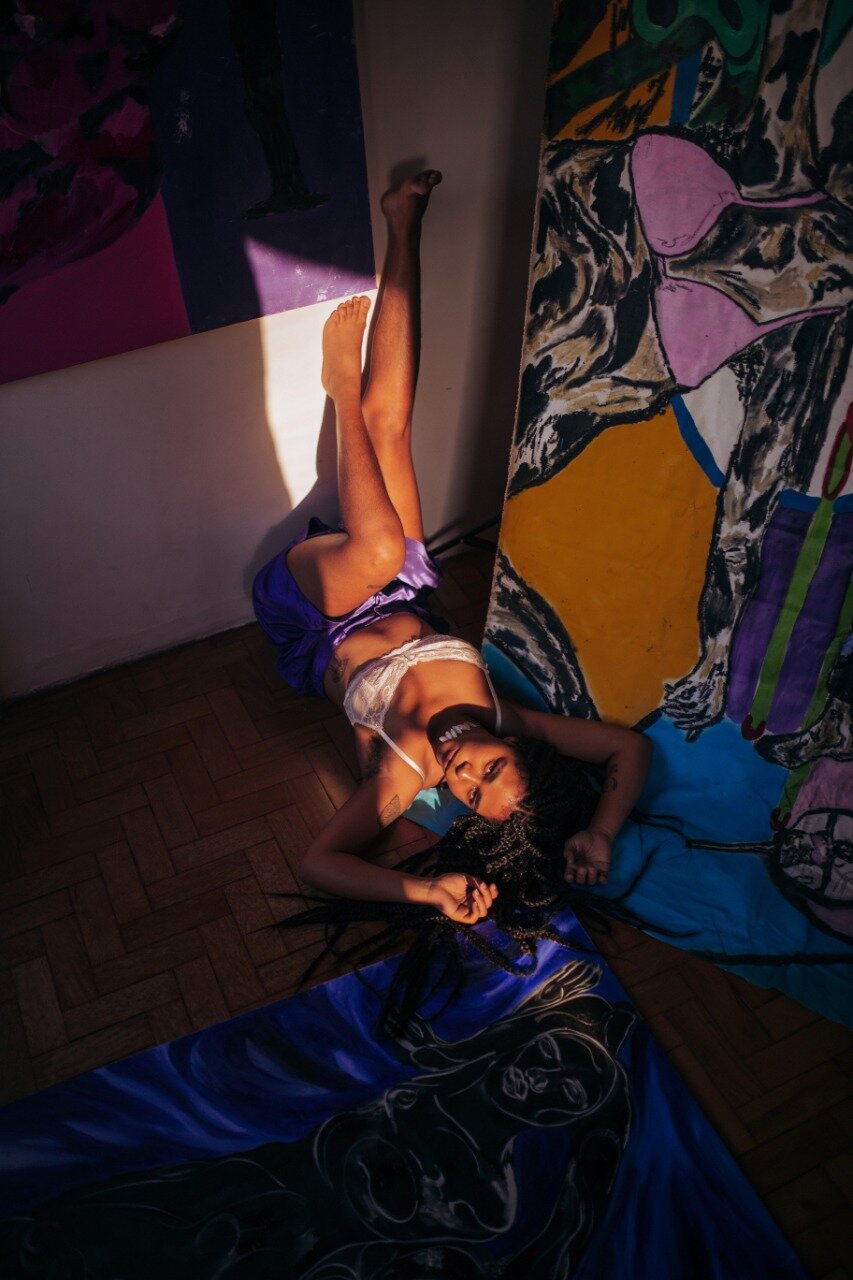 Heloisa Hariadne in her studio photographed by Rony Hernandes 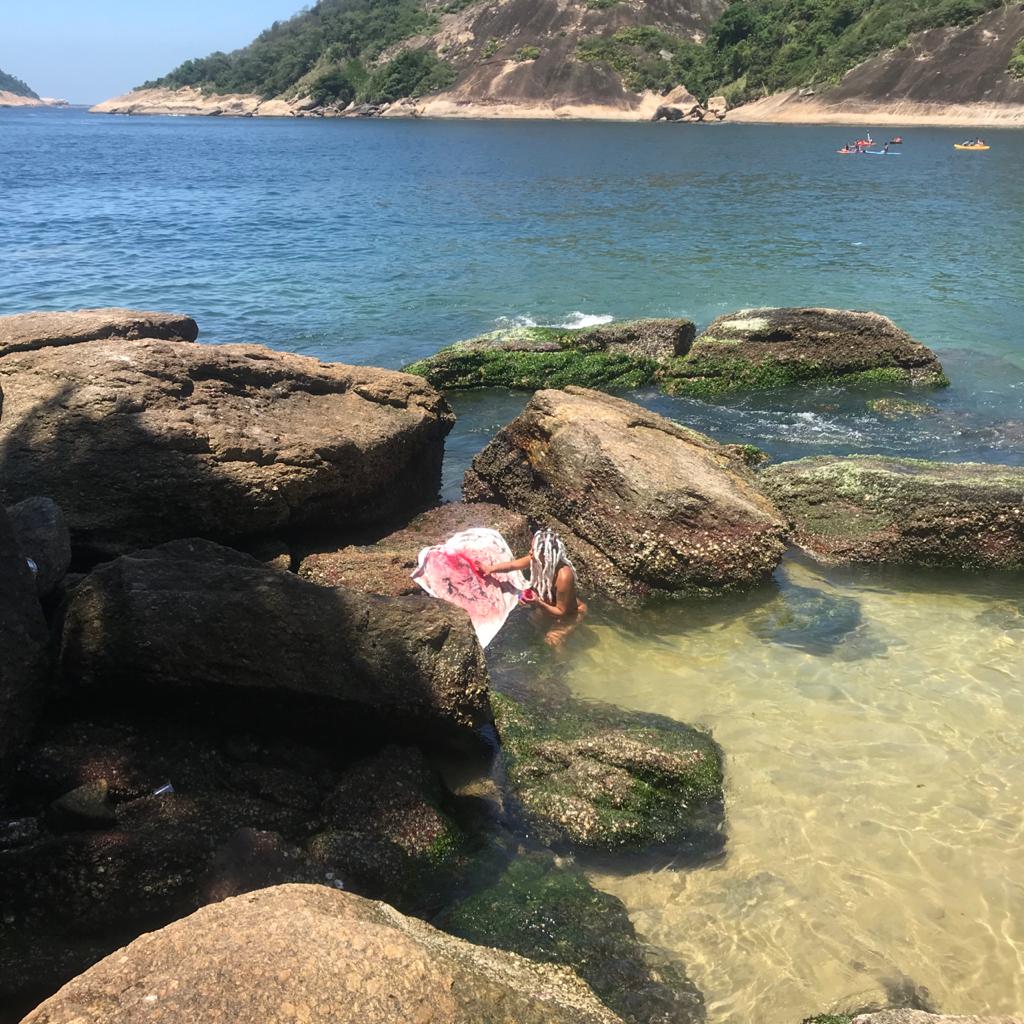