From photography to Biomythographic expression, Notes on Self - Bubblegum Club

My interest in art began with a crayon and as I grew older my innate performative self, began asserting space. Though never a student of drama, it is this sense of performativity that lingers in all my creative tasks. I drew, and I painted, and I sculpted and I sang — long before I ever took a photograph that I considered a piece of art. Looking over the infancy of my art trajectory it is still ironic that I became noticed for my photographic work as opposed to all the various other practices I have invested my time in. And so here I am, a 27-year-old Johannesburg based multi medium artist, whose only ever exhibited in photographic exhibitions. I grew tired of being recognised for only some aspects of my creative outputs in the form of pictures and words and thus went on to pursue a post graduate degree in Fine Arts at Wits University.

After spending most of my early 20s as a girl culture author in both image and text, a new meaning revealed itself to me while working with photography legend, Michelle Loukidis. With Loukidis as a mentor I found that I had a deep interest in documentary photography and began documenting my life. Within a span of a year I created a documentary photographic project that spoke to my identity and personal relationships. Yet still, the divide of creative discipline grew and I kept looking for a stickiness-of-sorts to ascribe to my practice, something that would move me to say, “my art is about….”. As I have never easily been able to speak about my own practice despite being a cultural critic and author. A new journey sprawled out before me, informed by a previously developed set of self-documentary. 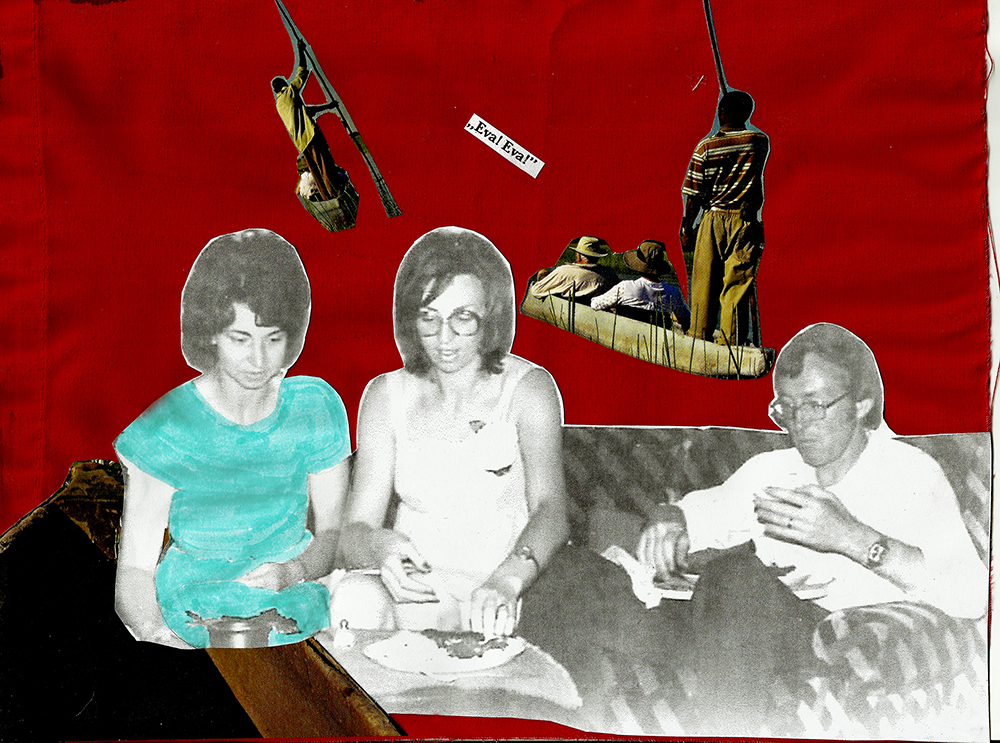 In my Honours course I have become interested in the intersections of my identity that I have previously ignored. The threading in and out of my culture, sexuality, race and geo-specificity – and the ways in which this informs my self-identity and expression. I began looking at myself as a queer, white, Afrikaans woman in South Africa. From this specific lens and embodied experience; my project has expanded to engage with cultural specificities, into my Afrikaansness. Looking in; I became fascinated with the dominant matriarch that arose in front of my eyes. The woman who ran her household with preen and an iron ladle. The woman who knew both how to change a tire, kill a snake should it be provoking, as well as to cross stitch. And so I found this woman, who was me, who was my mother who was my grandmother. She is the focus of my study of self.

The question then became, how would I access this woman? And the simplest answer that came to me was through her photographs and her personal belongings that spoke to who she is. I walked to my mother’s ill maintained filing cabinet and pulled out the red leather bound family album and pulled images from the archive that spoke to me. The next answer came for me through the embroidered lappies that each woman in my family owned (to be placed on a tea tray). After letting the fabric rest in my hands and really feeling it my next instinct was to photocopy its creases and textures. Then I photocopied a photograph of my mother on her wedding day. Onto the photocopied image of the lappie, I painted with eyeshadow pallets and smeared over that with glue to create a varnish. Before I knew it, I was collaging, and my mother’s face become that of a vulture. By her head are the words “ROU KLERE”, which directly translates to “clothes of mourning”. Her wedding day, was a day of sadness and the beginning of a lifetime of sadness. Each collage I’ve created are family portraits with their own narratives to bare.