Living and working in Detroit, Michigan, Ashley Cook received her MFA from HEAD-Genève in Switzerland. Persephone, presented by Hamtramck, is her first solo exhibition in the US after her return from Europe. Hamtramck is an artist collective that makes use of ceramics to open up multidisciplinary collaboration from their studio and gallery in Hamtramck, Michigan.

The story of Persephone is employed in this show from Greek mythology as a signifier of “season’s change”. Persephone is the daughter of the goddess of vegetation and is abducted by Hades, the king of the underworld, forced to take the place as his queen and reign over the barren landscape resulting in winter. Mythology is seen as a way to make sense of the living world, yet as it moves across time its meaning changes through generational shifts. Conceptually, we may interpret Persephone’s tale as one that speaks to her mournful acceptance of her situation as she is removed and cut off from the natural world with no control over her circumstances, she watches the world turn to ash around her. 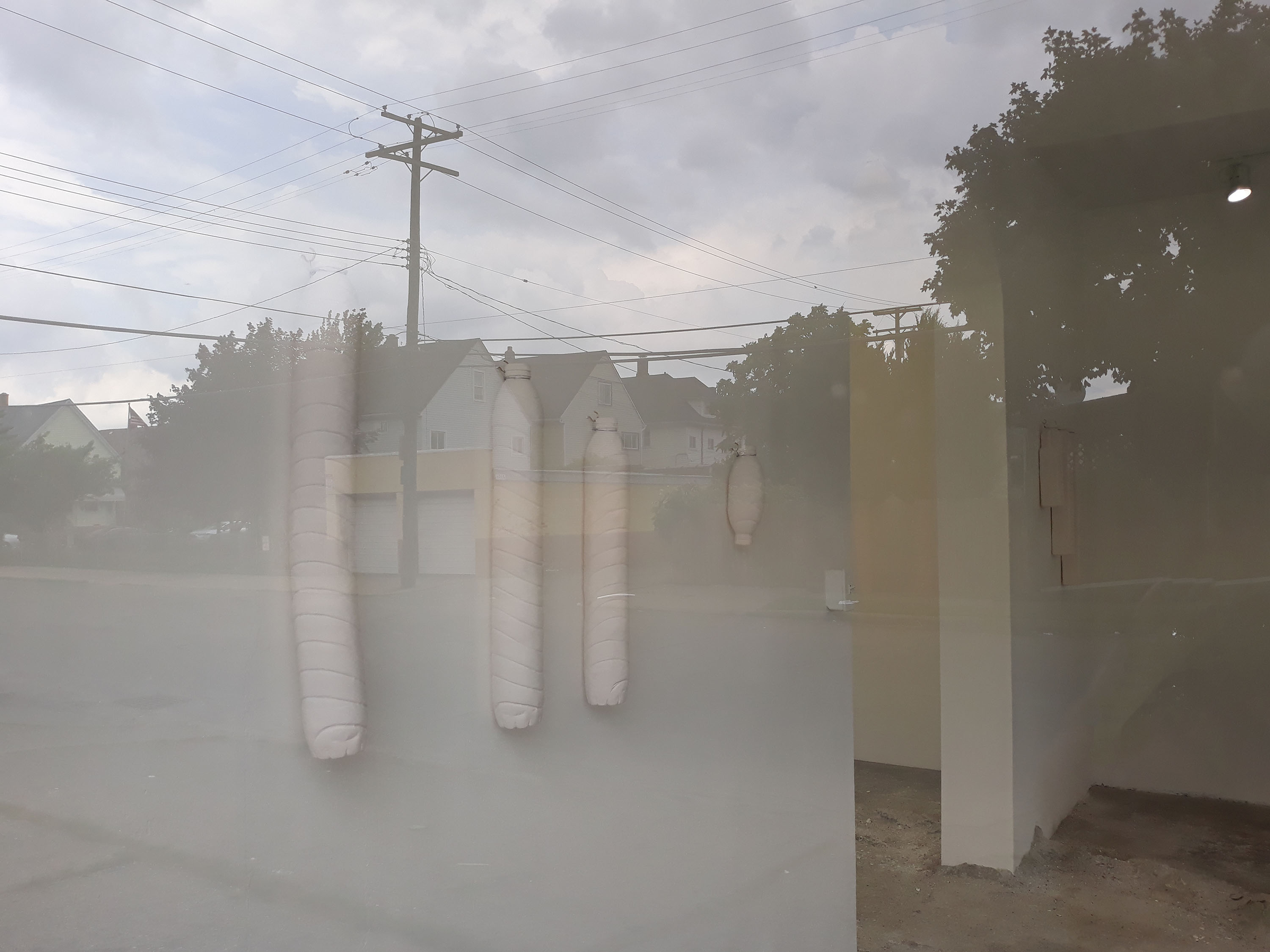 The pieces of Persephone appear to be disjointed yet they carry with them the contingent possibility of being related. To create the ceramic bottles, forms were appropriated from existing forms related to modern industrial works.

“The grouping attempts to address the anxiety-inducing effects of incessant production and reproduction, while at the same time, the complete unraveling of the expected.” An imitation crater eats the floor of the gallery space. There is a painting referencing classical art history (western). Sculptures take their influence from plastic bottles. The idea of hierarchies is brought to the fore. “…from object to object and between nature and everything else.” Such hierarchies of objecthood have already been brought into question by archaeologists and history of art scholars alike as these minds uncover the remains of past civilizations and attempt to comprehend people from a time before our own. In this is meant that certain objects are oftentimes regarded of more value than other objects, in the case of Cook’s Persephone and the hierarchical scale the question is, if the painting that references art history is more important than plastic bottles? 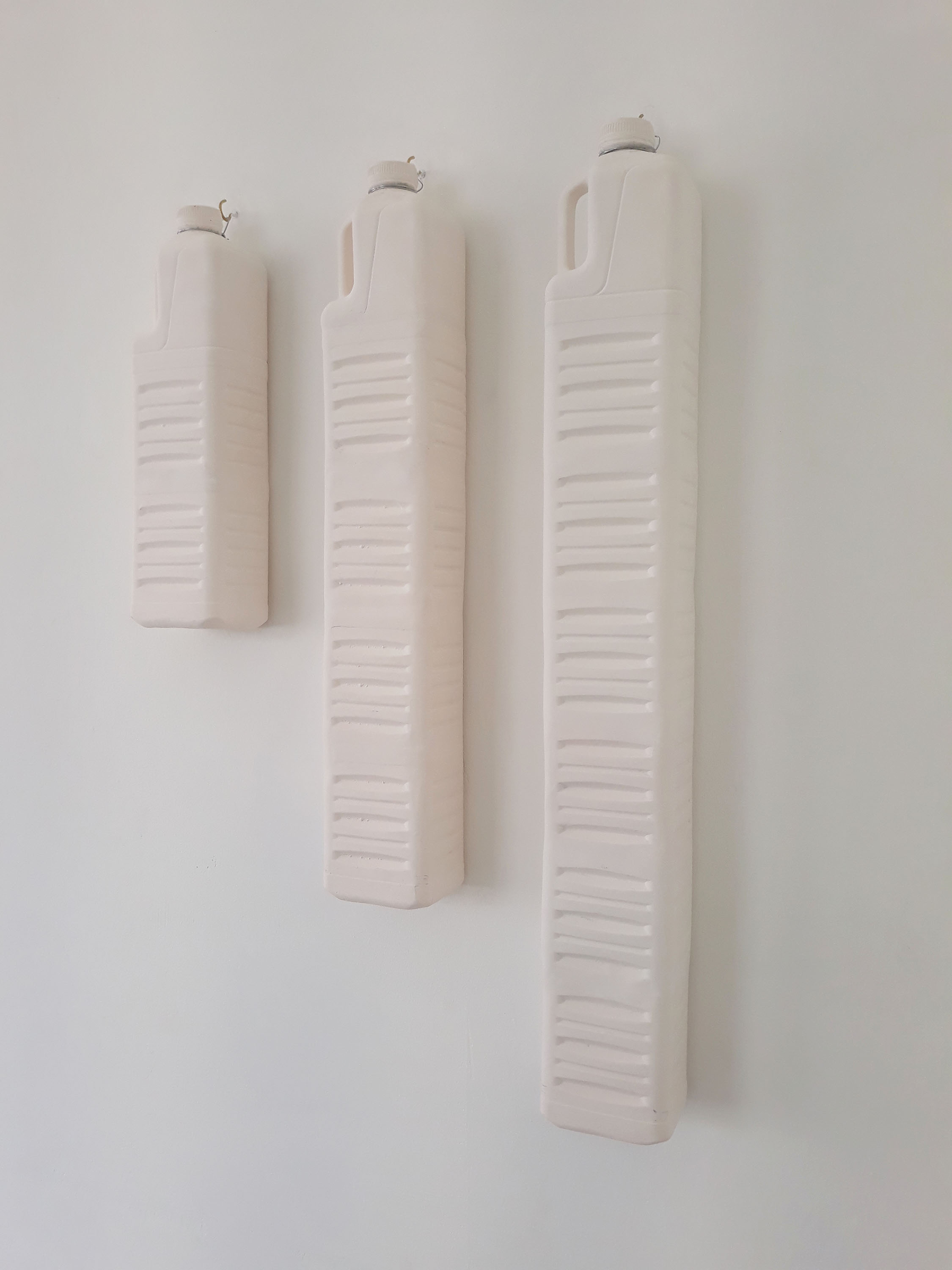 As we look into our precarious future, imagining our deconstruction, and then excavation, the thought of this new, more ambiguous space, with much looser and open connections, can be freeing.

I had an interview with Cook to find out more about the body of work:

How long did it take to conceptualise this body of work? Could you please describe the process?

Yes, so Persephone is a continuation of a thought process that began in 2017 that is primarily concerned with our modern relationship to pre-modern and “lost” cultures. I attempted to imagine how “our time” will be viewed by civilizations in the distant future.  The forms in this show are an evolution of a prior show that I called Less Sauvage than Others?; the actual creation of this work however, took about five months to realize. I began with contemporary plastic bottles, appropriating, distorting and casting them in ceramic. I chose ceramic because of its significance as one of human kind’s oldest production materials, using this ancient medium to create a moment where time becomes abstracted, warped and elongated. I was also considering the link between ceramic and plastic, as archaeologists find ceramic left behind from past civilizations, in the future, they will be finding plastic left behind from us. 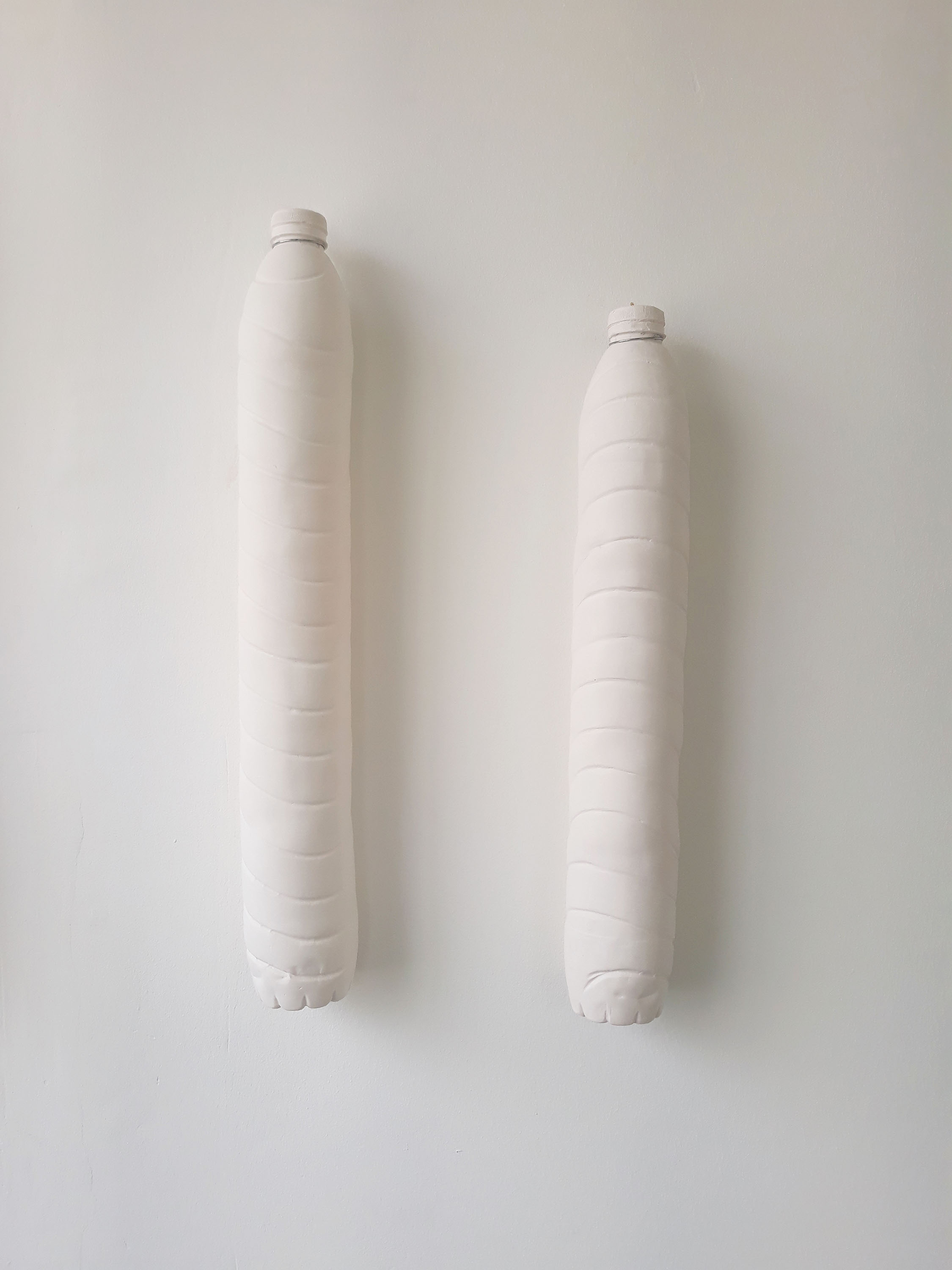 The way I chose to distort the bottles was inspired by stalagmite and stalactite, with industrial shapes breaking into organic growth which also visually mimicked something like digital glitching through overload. A similar abstraction occurs in the show’s single painting, titled The Catch, zeroing in on and distorting a portion of Gian Lorenzo Bernini’s sculpture The Rape of Persephone, a work that depicts the moment when the Greek goddess Persephone is kidnapped and forced to the underworld. As a final addition to the group of works, I decided to create a crater on the floor of the gallery space to set an environment for the wall pieces to exist within and be conceptually activated by. In terms of the painting, the crater represents the hole in the ground from which Hades came; in relation to the bottles, the crater represents the archaeological dig.

The works are conceptually linked to concern for the current and future state of the Earth. I used the story of Persephone as the foundation for the development of the show as an avenue to discuss the planet changing from the plentiful green earth to the barren landscapes of the underworld as a result of a disregard and disrespect for the feminine, Persephone, her mother Demeter and the Earth itself. The bottles represent the incessant production and reproduction of trash while also representing the woman as a vessel. In relation to the topic of climate change, the crater sets the stage of a barren landscape, which could be the future Earth or could be the other celestial landscapes, like the moon or Mars, that we have been looking to be our new “home” after the Earth is no longer inhabitable. 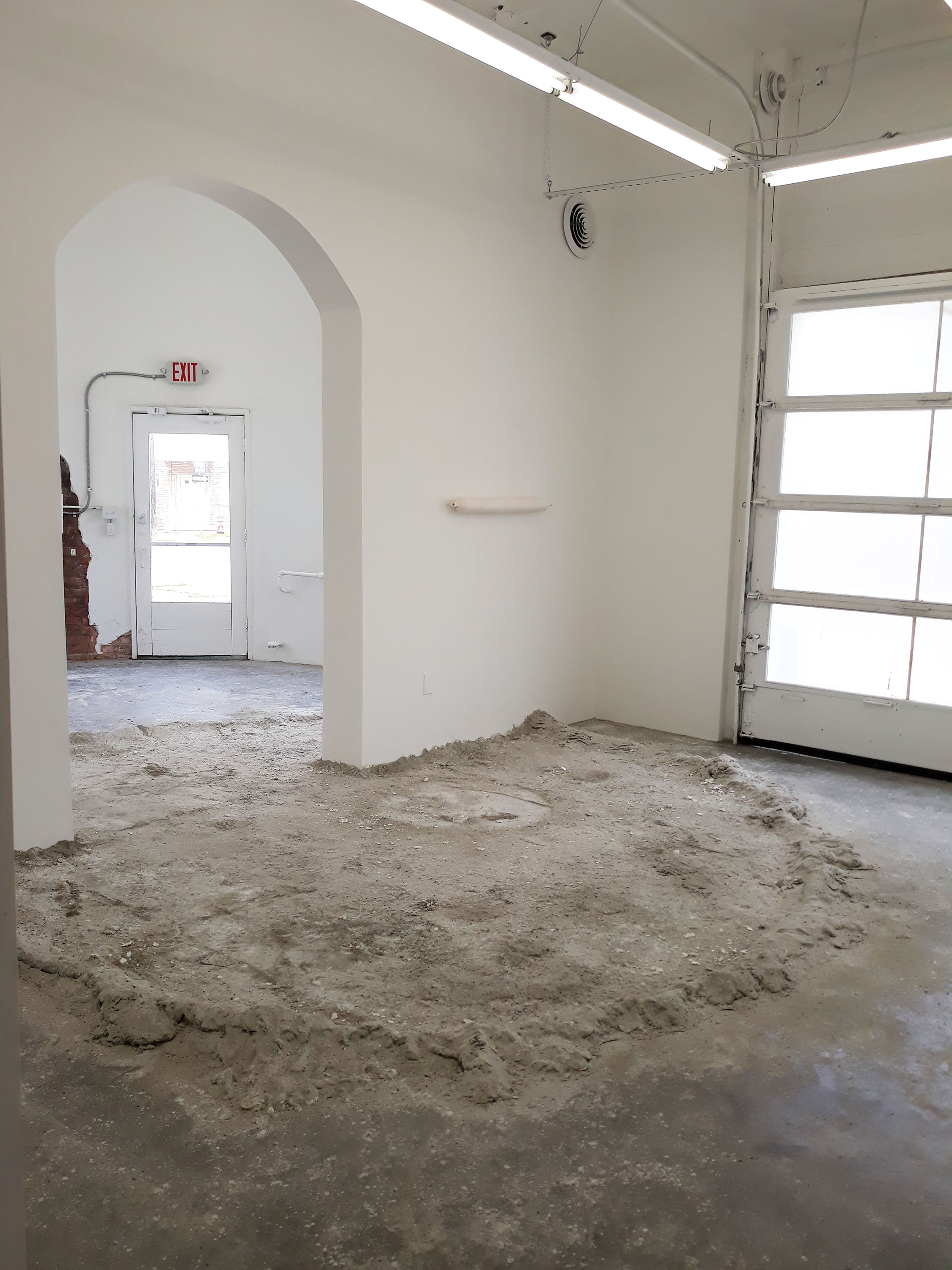 How were works created?

The painting was done in oil paint, based on a digitally manipulated sketch. The crater was created on site in the gallery space, using various materials but consisted primarily of concrete and plaster. The ceramic bottles were based on original plastic bottle designs taken from Switzerland and United States, manipulated, and casted from a mould.

What does the title refer to?

The title refers to the story of Persephone, a Greek myth that has generally been used to explain the change of seasons from summer to winter. In the story, Persephone is the daughter of Demeter who is the goddess of harvest and agriculture, presiding over grains and the fertility of the Earth. When Persephone is abducted by Hades and forced to become queen of the underworld, Demeter dedicated all of her time and energy looking for her daughter instead of creating plants and life, resulting in a fruitless and barren landscape. 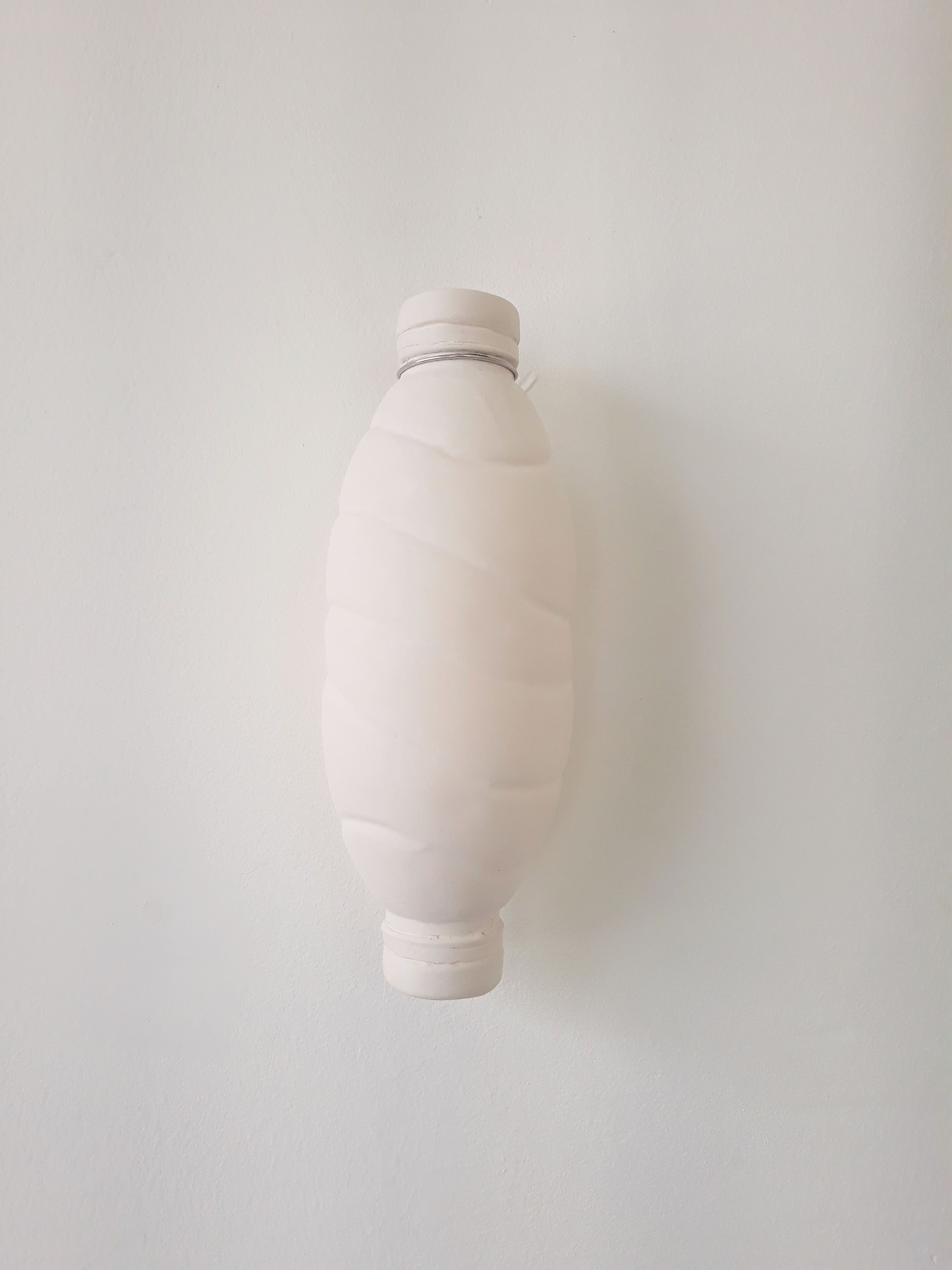 How does the concept of Greek mythology connect to the notion of incessant production and reproduction?

This is an interesting question; as opposed to thinking of Greek mythology in general as having a relation to incessant production and reproduction, I specifically wanted to use the story of Persephone and its relation to the changing of seasons on Earth to discuss this notion and it’s resulting effect of catastrophic changes to the planet. I realized the relevance and similarity of Persephone’s position in relation to our life on Earth, with her circumstance also being largely out of her control; I thought it may be relevant to touch on this thought, so a portion of the writing I presented for the show attempts to explain;

Mythology provides ways to comprehend and conceptualize the living world, but as it spans time, meaning transforms through the digestion of generational differences. Conceptually speaking, the generations on Earth right now may think to cannibalize this story in a bit of a different way, relating directly to her and the melancholic embrace of her circumstance as she experienced the pain of disconnection with nature, without any control at all as she watched the world around her burn. 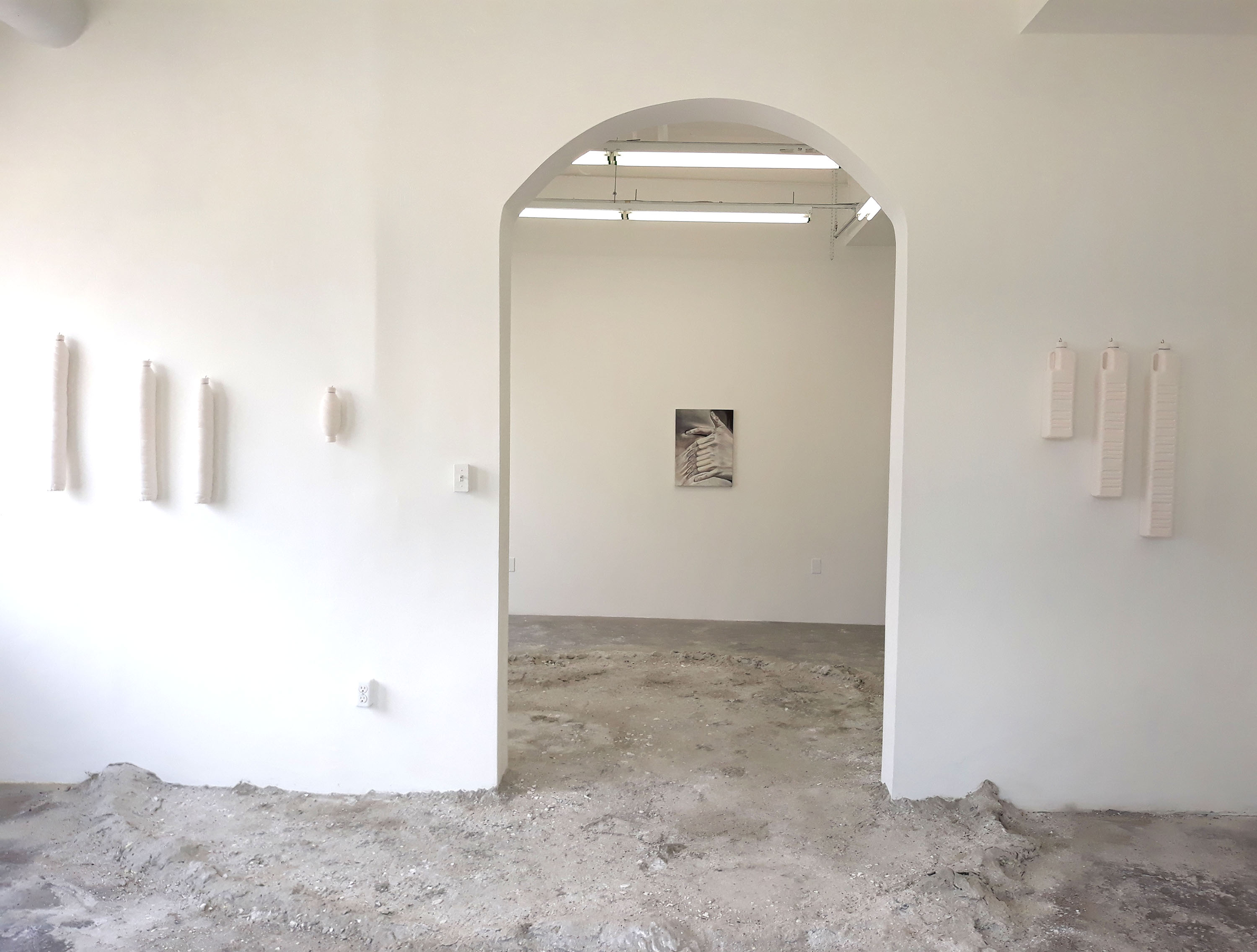 I understand mythology to be stories told to help us understand the living world, but as they span time, their meaning can change based on the different concerns or circumstances of the time period in which the story is being consumed. All aspects of the exhibition were founded on appropriations of prior forms or concepts; I decided to do this to test this thought not only in relation to mythology, but elements from art history, contemporary culture and architectural spaces. Bringing these elements together allowed for them to take on slightly new meanings as they communicate and try to understand each other in relation to one another in these unfamiliar relationships. This ambiguous space of malleable meaning is the most interesting aspect of the work to me, and in this way, again relates to the production and reproduction, but conceptually as opposed to physical objects.