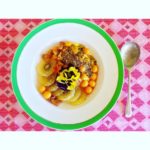 I had a chat with founder of Plump Kitchen Mpho Masango to chat about her passion for food and re-thinking dining experiences.

Mpho started Plump Kitchen as a way to channel her love for good food and caring for people. During our conversation, in between giggles, she revealed to me her sneaky attempts to avoid making dinners at home when she was younger, but she kind of fell into the cooking thing during her university years in Grahamstown. During this time her interest in food grew to more than just a love for great tasting food, but experimenting with what she could make. She recalls during her second year a fancy restaurant opening up in Grahamstown, which appeared slightly out of place. She began to waitress there, and it was not long before she became assistant manager. Befriending their chef, she remembers spending time watching him cook and she became known among her friends as the go-to person for delicious meals.

After spending some time in London after varsity she returned to her home, Johannesburg. Moving into Maboneng, she worked with the guys from The Bioscope to start the restaurant attached to it, Chalkboard. In 2012 Mpho turned dabbling with making food for friends into her new baby, Plump Kitchen. Expressing her hatred for the word ‘catering’ because of its associations with white tents, and churning out flavourless food, Mpho is making Plump Kitchen an offering of good food made with love. “It matters to me that people understand that what they put into their bodies is really what comes out. If you are not taking in all the goodness you are supposed to take in, you are not optimizing on your own body. This affects your body and mind. The most immediate impact is on how you feel,” Mpho explains. With an emphasis on the way food makes you feel, Mpho tries to make every Plump Kitchen experience feel homely; through the food, the energy, the attitude. Stemming from this, Mpho explains that her pop up culinary experiences will always be hosted at someone’s home. “[It is] important to make you feel like what you are having and experiencing can be made at home”. Adding to the sometimes limited eating options in Johannesburg, her pop ups create the feeling of visiting a friend, while offering a party for your taste buds. She sees her pop ups are also her playground. “[I] get to go completely crazy and imagine ‘what if I could do this for people?’, and try to pull it off.”. Plump Kitchen’s third pop up will be hosted on the 12th of March and will see meals inspired by the tastes of gins.

“I’m not trying to build a food making machine,” Mpho explains. Working with suppliers who source their produce from small scale, organic farmers is tied to her appreciation for eating well. Mpho has declared this year a year of knowledge to contribute to her attitude towards re-thinking dining experiences and creating a well-rounded understanding of food for all the food services Plump Kitchen offers. She is determined to be behind a mindset change and assist people in training their palettes to crave the delicious and the healthy. With the plans for a food truck and packaged meals in her vision, best you keep your eye on Plump Kitchen.