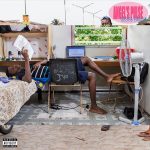 ‘Angel’s Pulse’ picks up in the place where Dev Hynes’ previous album, ‘Negro Swan’, left off: with Hynes holding the reigns of his sound tightly and turning the gaze inward. In many ways, this album is the natural progression of the critically acclaimed ‘Negro Swan’: an experimental funk/soul project that was committed to celebrating and unpacking the vast black experience, from falling in (and out of) love through to Trump-Era anxiety. This new record, however, sees Hynes writing in ways that feel less overtly political and instead feel more like the diary entry of someone living and surviving in the times. On ‘Angel Pulse’, the political becomes the background to the personal and Hynes is letting us in.

“I Wanna C U” is the first track, opening with the kind of synth guitar, bass and whispery, silky vocals that characterize most of Hynes’ work. “I wanna see you (and keep it in your home)” Hynes croons to some distant lover who he isn’t anxious to make public. The song flows over into “Something to Do”: a track that does that Blood Orange thing where he manages to capture feeling acutely sensual and sad at the same time. There are many points in the album where the songs end at around or under two minutes, giving it the kind of speed and energy that is almost reminiscent of Tierra Whack’s ‘Whack World’, which you’ll hear again later on “Baby Florence”.

Nostalgia and reflectivity are themes that are recurring throughout the project. “Dark and Handsome” with Toro y Moi taps into feelings of pessimism and persevering through the parts of life you’re unsure about when you’re young and black. “Don’t be actin dumb, cookies gonna crumble. Wipin up the crumbs, I do this shit casual. Happens all the time. Plus, I’m dark and handsome” Toro y Moi raps on the outro. Using his music to reflect on black pain (even when he doesn’t say ‘black people’) is a talent of Hynes’. On ‘Benzo’, Hynes showcases some of the most sonically pleasing musicality he’s ever put out: blending funk jazz sounds and electro instrumentals while pondering about his sense of belonging in the world.

The album takes a moment of pause for tragedy. On “Birmingham”, Hynes (with Kelsey Lu and the brilliant Ian Isiah) take a moment to remember the bombing at Birmingham, Alabama in 1963 where four young black girls were killed by white supremacists at the Sixteenth Street Baptist Church. The opening lyrics “She raced through the streets of Birmingham, calling for her child, she clawed through the bits of glass and brick” reference the highly publicized news broadcast by Gene Patterson that stopped time in America for a moment. Ian Isiah’s cry “where is my baby” at the refrain is beautiful and painful to listen to, and Hynes lets those vocals take the starring role.

On “Gold Teeth”, Hynes sets up a lyrical match that is himself and Tinashe on one side, Project Pat and Gangsta Boo (The Queen and King of Memphis) on the other. Boo and Pat go bar for bar, exchanging the kind of real Southern hot girl/boy shit that Megan thee Stallion is revitalizing (see Chop Shop for more). Tinashe and Hynes team up to do whisper vocals Mariah Carey (who is also a Blood Orange fan) would be proud of. The song is followed by a much softer note with “Berlin”, where he invites Ian Isiah back again to share the track with himself and Porches.

Angel’s Pulse probably isn’t going to be played on Five FM and you probably won’t hear much of it in your favourite DJ’s nightclub mix. It’s experimental and a lot of the project feels like Hynes inviting us to watch him work out his own feelings, which he is still processing. Instead, ‘Angel Pulse’ will be one of those albums that finds a home in your library and that you return to frequently because it captures a feeling and mood that feels tangible to being young(ish), black and out in the world working through things.