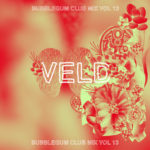 Having listened to Richard D. James Album at 16 and discovered the music making software Fruity Loops soon after this, Veld fell in love with electronic production techniques. We had a chat with him about about his musical journey and got a bespoke taste of his talent with his Bubblegum Club mix.

Can you tell us a bit about Veld?

Veld’s the name I’ve been recording music and occasionally djing under since about 2012. You need a name, right, to keep it all in order?

How would you describe your style?

“Loose”. My brother says he can recognise a consistent style in my music, but I’m not sure that I could. At one stage I honestly thought the best thing I’d ever made was a mashup of “I Wanna Dance With Somebody” and “Numbers”, but it turns out it was Girls who made it. That little slice of cryptomnesia might suggest I’d like to sound like a mix between Whitney Houston and Kraftwerk. Actually I’d like to sound like a mix between RZA, Plaid and Kris Wadsworth. Still not close.

Can you tell us about your musical background – who or what sparked your interest in electronic music?

Warp Records. Warp Records did that. In it must have been 1997 or so. Of course those artists had their own influences, and there’s never a break in the chain, but for a 16-year-old in Durban it felt like an utterly new mode of expression, completely sui generis.

At that stage my top records were probably Van Morrison and Pixies. But after I heard Richard D. James Album that was that. I didn’t want to listen to music with guitars in it for the next five years. Because you’d know how it was done. Electronic production techniques seemed to allow for the possibility of hearing sounds that had never been heard before. And that was so exciting. A few years later when I came across a version of Fruity Loops 1.0 from god knows where I thought I’d found the keys to the kingdom. How long I spent trying to reconstruct Squarepusher’s “Red Hot Car” on those four midi channels I don’t know.

After Warp, African Dope Records was massively influential. As well as putting out incredible tunes, I could go out and see the artists playing this stuff live. They made the idea of producing electronic music attainable. I remember nervously knocking on the door of their studio in like 2002 and Fletcher being very hospitable and showing me the little Korg, I think, that they’d used to make those noodly worms on Neon Don’s “Life is Neon”. It had note names written on tape on the keys, and I was like, well if they can make tracks like that without knowing exactly where F# is, maybe there’s hope.

What are your musical influences?

Listening to music is obviously hugely influential, whether because it informs my taste or provides specific inspiration for a track. But an equally important influence has been the way in which my studio has evolved, and the way in which my use of it has evolved. Getting a new DAW or effect, getting to know an old effect a bit better, learning a new keyboard shortcut or a scrap of music theory, deciding on a new sample folder structure…It’s prosaic stuff that ultimately determines how sounds are going to emerge from a session.

What do you want to express with your music? What emotions should it evoke within the listener?

Evoking anything’s not really the motivation behind me making tracks. For one thing not a lot of people hear them, so the idea of making music for an audience seems a bit grandiose. To the extent I’m trying to express anything it’s what I’m feeling at a point in time, but it can’t be as immediate as if I were an actual musician making my guitar weep because my dog died. The process is drawn out: I’m going to be coming back to a track over days or weeks or months. So it becomes a case of exploring the palette you’ve established for yourself, or the logic of a concept. The reason I’m making music at all is because I love that process so fucking much, particularly the sense of exploration and progress. Surprising myself – capturing something in a heavily mediated process that sounds fresh and contingent – is the drug.

What’s next for Veld?

Keeping on trucking, learning about music, seeing where Ableton takes me. I’d love to have a track used on a surf clip.

Lighthouse Festival is Set to Bring a Stacked, Representative Line-Up for Their Joburg Debut