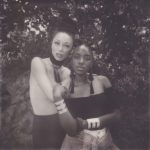 Having met in high school, the duo now known as Kami Awori began their creative pursuits together performing in front of their school which led to the birth of their first band CaramelBrown. A classical pianist by training, producer Karami [Juline] grew up in a musical household thanks to a grandmother that was a piano professor. Similarly, singer & songwriter Awori’s maternal grandfather also had a passion for music which led to a music-filled home and her pursuing singing and songwriting from the age of 8, and studying classical and jazz in high school. They continued their musical education post high school, with Awori going to Montreal to study live performance and Karami going to Cuba to play music in a collective.

As CaramelBrown the duo released 3 EPs including a collaboration with Karami’s former collective in Cuba. “That was the first time we were [in Cuba] together…We went there separately and this was the first time the both of us were there to work on the music collabos with musicians that we’d met from when Juline was there for a year,” explains Awori.

2016 saw the duo drop CaramelBrown in favour of Kami Awori. “We felt like we weren’t linked to that name anymore,” says Awori. The debut release as Kami Awori was the politically charged ‘Lunation’ which was a tribute and contribution to the Black Lives Matter movement. However, Awori explains that the aim of Kami Awori isn’t necessarily to make political music, although politics have always been important to them. “Not to say that all of our music from now on is going to be super political, but I think it’s important to have a message and think about what people are going to take from the music. Our future projects, like say the album that we’re working on, isn’t 100% political, you know. There [are] still love songs in there, there [are] still songs about heartache.”

While the album is in its final stages there isn’t a set release date yet. “I’d say we’re in the final stages so hopefully 2018,” says Awori. The album has been created around the world including Berlin, New York, Paris and Johannesburg, and features collaborations with a number of traditional musicians. The album documents their experiences making and playing music around the world over the last few years. “The theme is life and evolution through life as women working in the music industry, and the different stages [we have gone through]: good, bad & ugly.” Karami notes that in terms of the sound they used a lot of percussion combined with electronic effects, something she had explored on ‘Lunation’ but is being pushed even further in the upcoming album.

Speaking of what she wants her listeners to take from their music, Awori simply states: “I’d like our music to change people’s views on things or question what they hold as true. I’d like people to think more of the world, and also really feel things.“