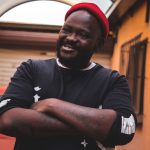 Thabiso Ngubeni, better known by his stage-name Fireman R5 is an independent rapper and artist from Vosloorus in the East Rand. His latest single, “Black Tax”, speaks of the social issues faced by young unemployed and working-class black South Africans and the aspirations to change this cycle.

The song was born out of a personal experience that saw Fireman R5 unable to support a family member financially. “One of my uncles who I talk about in the song was asking me for a loan and I couldn’t help him out. It felt weird because I didn’t have money to help my uncle out so I wanted to explain that to him on a song.” The track also features a verse by Boske, a rapper with which Fireman R5 connected with online and who faces similar challenges. “Boske is trying to do the same for his daughter that he is trying to raise, but because of his financial situation, he and his girlfriend go through a lot.”

Rapping in Zulu, Fireman R5 talks about his frustration with not having achieved the financial independence he wants for himself. “I open up by saying it’s Fireman for the hustlers and the ladies of course. I’ve been on stage, doing gigs, trying to get this money but still not getting the type of money that I want to get. The verse is basically about me and my family.”

Based on a sample from Al Green’s “Love and Happiness” made by Fireman R5’s producer Bluucheese, the track was produced by Enkei, another of Fireman R5’s long-time collaborators. “Bluucheese is a friend of mine and my producer. I met him 2 years ago. Enkei I’ve been working with for quite some time. He’s always around.” Backed by a nostalgic boom-bap inspired beat, the sound of the song harks back to Fireman R5’s early days in music. “I tried reaching out to the community. They asked for some of my old stuff that they used to like.”

The music video, shot in Mailula, Vosloorus (a more middle-class suburb of the area), features the artists in a taxi sharing their verses in the same way that stories are shared in taxis on a daily basis. “We connect through stories told in a taxi. We can all relate because we come from the same place and have the same destination.”

Fireman R5’s next show is Live in Colour on the 12 of October at Vosloorus Stadium. He is also in studio working on an upcoming mixtape that is Maskandi-inspired. “I’m working on a mixtape with xSipping because when I go home they say, ‘Yeah you rap, but you don’t include anything from here.’ So I’m trying to mix that together. It’s probably going to drop early next year.”

As an artist, Fireman R5 hopes his music helps people connect with him and get to know who he really is. “I’d like people to take my truth. I want people to understand me as an artist.”