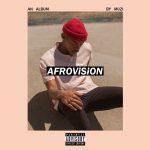 Muzi is the future and the future is now. With the release of Afrovision, Muzi, who has been producing bangers for a minute now, has gone from being an “act to watch” for those in the know locally and overseas to an absolute sensation both at home and abroad.

A couple of years back, on this very site, I said that Muzi had the blueprint for success, and the proof is in the pudding. Sure, at the time he only had one booking, but 2 years later he’s on a tour that’s seen him “murk” (his word) Durban, Joburg, Falkirk, Glasgow, Lancashire, Milan, London, and Wiltshire. With Oppikoppi and Rocking The Daisies ahead of him. He’s stuck to his vision and is now reaping the rewards for years of hard work and self-discovery.

To some, it might seem like Muzi has popped up out of nowhere because it takes the mainstream media and the public a while to catch on, but he’s already had a career that many artists would be jealous of. Major label releases, living in Berlin, making music with the likes of Damon Albarn, showing Stormzy around Durban, interviews and reviews on all the major international music sites, and a music catalogue that most producers are straight up jealous of.

Despite all that, Muzi is a relatable guy. Through his social media, you get a feel for his playfulness, his mindfulness and his humility. And not humility the way rappers are “humble”, but you get a genuine sense that while Muzi takes his work and career seriously, he doesn’t take himself too seriously.

While I’ve always found Muzi easy to relate to, his music didn’t resonate with audiences at home as much as it should have. Europeans were wilding out but Muzi was an underground fav in South Africa, that’s because the music he was making had African touches to western sounds. But with Afrovision, Muzi truly embraces his roots whilst creating something with global influence and reach. I personally consider Afrovision to be my album of the year. It just sounds perfect.

After his stint in Berlin, it feels and sounds like Muzi has finally found his place back home. He might still be a bit of a misunderstood outcast, but he’s also someone who knows who he is, where he comes from, and where he wants to go.

Muzi Needs to be a Better Person to Create Better Art

A personal narrative from a European travel experience