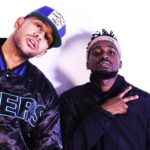 Tell our readers more about you and your journey as a rapper?

I was born and bred in Gugulethu township, Cape Town.

What you need to know mainly is that Ill Skillz is my foundation, the inception of Ill Skillz became a catapult for everything that has shaped up for me as an artist to this day. My partner-in-rhymes Jimmy Flexx and I formed Ill Skillz in 2005 in the Gugulethu, through consistency and perseverance we grew our brand from strength-to-strength. Our main highlights being the execution of the 24 Hour Project both in Cape Town and London Red Bull Studios in consecutive years, and also getting an opportunity to perform at the CT International Jazz Fest in 2012. Our catalogue totaled up to 7 projects in a span of 10 years.

Early 2015, we decided to take a break which became the initiation of my solo career. Today as a soloist, I’ve accomplished 3 projects and 4 videos, garnered tons of PR coverage and gig appearances.

You describe your video as reflecting the essence of classic hip hop and celebrating music for what it is. Would you like to elaborate on this?

Nowadays when you look at how hip hop music is generally portrayed it is glamourised or it displays all kinds of generic shit. Not that I’m against whoever decides to represent that generic image, but for me I always feel the urge to standout differently. I recall during the early days of my career with my producer by the name of Planet Earth, where we used to go crate-digging at the very same record store on the video searching for soul/funk/jazz samples to chop for our beats. In essence I decided to take that reflective approach to preserve my originality, hence the use of a old-school soul sample on the song also.

Elaborate on the sound you created for this track?

Having substance in my music has always been mandatory, in addition to the soulful sample that was incorporated on the production what really enhanced the song was the trap-influenced drum pattern which Desert Head the producer executed so well. In essence the sound is bridged between 2 generations, to top it all it has the 2 best lyricists from Cape Town, YoungstaCPT playing an exceptional guest role. Instinctively, I also felt that it needed a catchy hook that had an impact to complete it, with relatable quotes within the verses to complement.

Tell our readers about the thinking behind the name of the track, “Native Yards 57” and the video’s dedication to township kids?

The title derives from the naming of Gugulethu streets whereby each name begins with “NY” then followed by a number/code e.g. NY1, NY2, NY3… NY55, NY56, etc. This naming structure originates from the apartheid era as the “NY” stands for Native Yards, which obviously highlights a negative connotation, so I often tend to rub it in the face either way the same way African-Americans used the word “Nigger” in an endearing manner.

As you may also see, there are young kids featured on the video who are from my NY57. Growing up there I understand the challenges of being raised under volatile circumstances especially when the area is well-known for its history in gang culture. My aim was to revive some hope and excitement in their daily lives hoping that they discover beauty in their struggles and find things that can take them off that path.

Tell our readers about your mantra “What Up Township”?

Haha. Funny enough this came about during the Ill Skillz-era as an inside joke involving Dudley Perkins whose an artist from Stonesthrow Records in Los Angeles. He came to perform here in Cape Town along with his partner Georgia-Anne-Muldrow around 2010 or -11, he became annoyed of the fact that the architecture style of the Cape Town buildings resonated so much with the European’s kind. So we had promised him mid-week that we would go visit the townships since he was performing there over the weekend anyway, the “Township” became the centre of our topic throughout and it eventually stuck until he said “What Up Township” on stage. It just sounded funny if you had to hear it from an American accent, but we eventually put it into good use by using it to embrace our identity and where we come from.

Tell us about deciding to collaborate with YoungstaCPT?

Since I became soloist, YoungstaCPT and I have been always talking about a collaboration we both aim could have a major impact for our city. Now during the time I was finishing off the Uno ‘n Only Tape I got this beat from Desert Head when he came to visit me and Kay Faith in studio. I wrote the chorus as soon as I heard it, recorded the rest of the song and sent it to Youngsta there afterwards since he was based in JHB. I could feel his excitement as well because he didn’t take long to complete it all.

Tell us about what you think about the SA hip hop scene in general and the new wave of Cape Town rap that you and Youngsta are part of with regards to breaking down barriers in the SA hip hop industry?

The SA hip hop scene is definitely at its all time high especially when we speak of its lucrativeness and its support has grown exponentially. Meanwhile in Cape Town, we possess a different vibe and energy which I feel is highly-necessary. Only thing it lacks evidently is the media infrastructure to match the amount of talent that already exists. YoungstaCPT and I relentlessly happen to be the bold ones to ever challenge the status quo nationally and its proven today in terms of where we are currently positioned as vanguards in the game. It had to go without even saying that lyrically and musically we stand for authenticity on incomparable levels.

Anything else that you would like to mention in regards to the video and the track?

The video represents authenticity at its best, which often isn’t what the general public accepts especially if it’s on mainstream platforms. So instead of targeting those platforms first I bravely decided to build its hype from the ground up by introducing it to the core fan base on the internet initially, then gradually move up. As we are speaking its currently shaping that way. I only hope for the best, just to make my hometown proud and especially those who support me.

Tap into Collective Energy with IndigoBangz

Under Pressure Sundays Put You On

Richi Rich is bringing Alex to the World