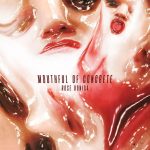 In the three years that she’s been making music, Rose Bonica has quickly become your favourite producers’ favourite producer. Well, at least some of my favourite South African producers absolutely love Rose and lose their shit whenever she drops something. Last week my timeline was flooded with local producers gushing over Rose’s latest EP, Mouthful of Concrete, and for good reason; I’ve never heard anything quite like it.

Yes, it’s techno, but it’s unlike the techno I’ve heard. There’s just so much depth to the music that Rose creates that it’s impossible to not get completely sucked in and lose yourself in the audio universes she conjures up. From the ravey as fuck opener “It’s Like Winter Without You” to the gentler, more fluid (although still glitchy) closer “My Soul is Bonaqua”, Rose provides you with a unique listening experience. The title track, “Mouthful of Concrete”, makes me feel like I’m running through a jungle being chased by a Predator. It conjures up images of Leonardo DiCaprio losing his mind in The Beach. It’s frantic and instils a sense of panic and unease in me. It’s a discordant masterpiece.

“Pressure Cooker” keeps up the pace and once again makes me feel like I’m being chased. This time I’m transported to the futuristic world of the freerunning Xbox game, Mirror’s Edge. I can see this being the soundtrack to running away from the cops in a cyberpunk future. There are moments where you get to catch your breath for a bit but they’re few and far between. Rose Bonica is easily one of South Africa’s more creative producers. She has a knack for creating off-kilter beats and mixing discordant sounds into beautiful blends that often feel otherworldly. With Mouthful of Concrete, she once again shows why she’s one of South Africa’s underground music favs.