K.Skits // Performances of the Self-in-Transition and Improvised Subjectivity as Political and Creative Praxis - Bubblegum Club

Tell me where I can put you down. I have swam the waters from midnight to dawn and carried you all the way till morning and I am tired. Of my flesh being a constellation of abstractions and questions marks stretched over pages that disremember my name, and of twisted tongues which distort the hymns of Eden that flourish within me.

Tired of the clocks that tell History’s time. Of their hands striking 13 while I awaits to arrive to worlds that do not know how to house me. Checking, checking and still yet checking every hour past 13, to see if the sentence of my naming day has been etched into your ways of rememorying me.

There within that place, inside of Time and History; suffocated by the smell of contrived definitions of (none)self and ancestral trauma- my flesh had felt tootoo solid and here it has melted, thawed and resolved itself into a dew. I have known how to speak encrypted silence before the sound of words took form in my breath and on my tongue; If my silence were to speak out loud what would it say? Of the places I have left behind, the pieces of me trapped in purgatory there still, and of this place in which I attempt to name myself anew from new?

hot thing for the taking

a river that never rests

the unfathomable depths of the world’s oceans

The things that come from God must be returned to God. 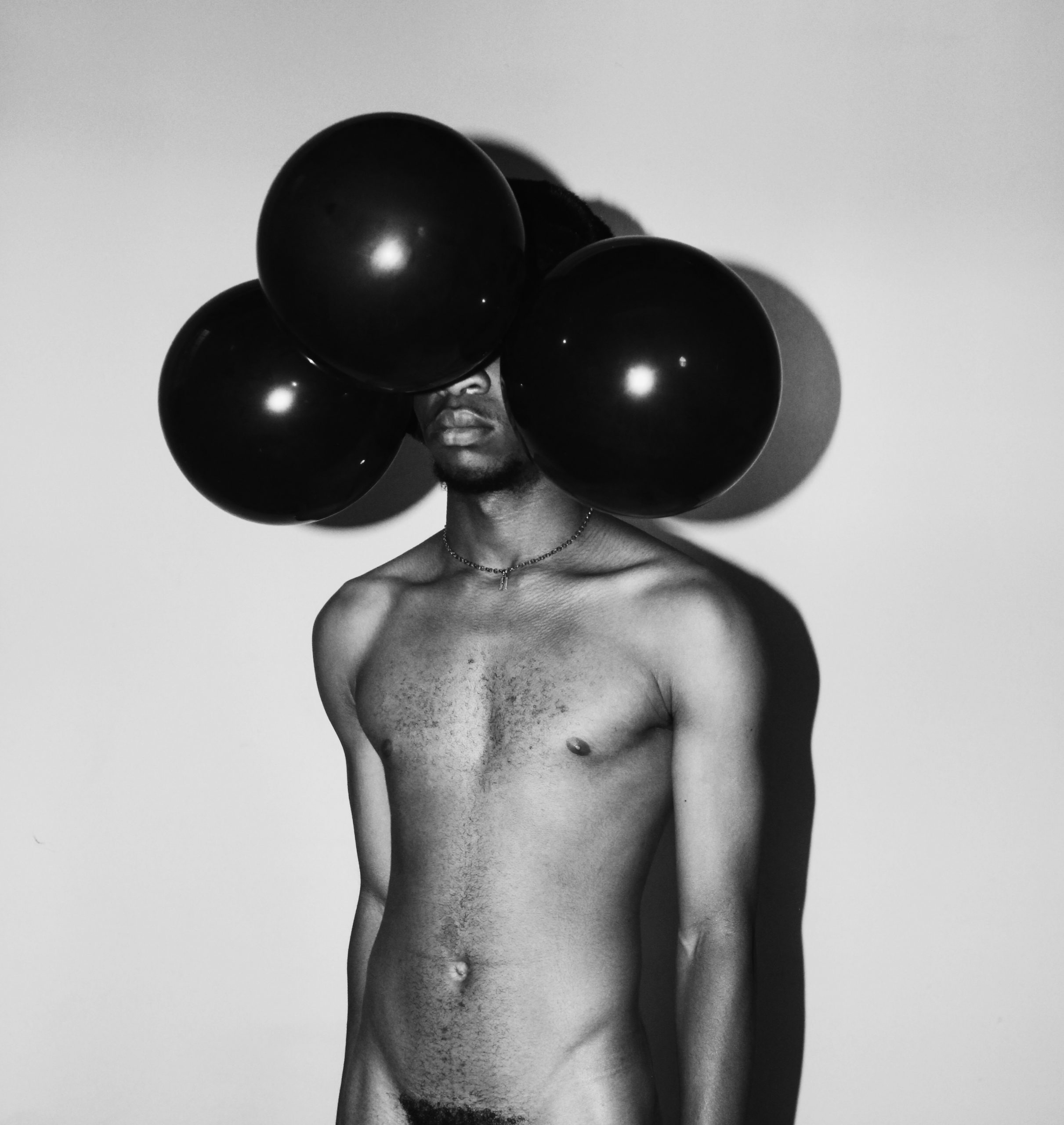 Though I am a man

who is loud
on the birth
of his ways. Publicly redefining

each change in my soul, as if I had predicted
them,

and profited, biblically, even tho

A question I think,

an answer, whatever sits
counting the minutes
till you die.

A poet asking us to to see his articulations reshaping him; a blackboard-filled-wall in a room some floors above the Wits Art Museum baring traces of articulations that reshape wiped clean. White whisper marks that once spoke to the big and the small, the oozing moan and blood curling scream, the then and the now, the flesh and the body reclaimed; white chalk traces of performances of the self-in-transition. “This is part of the search for the [“essence”] of blackness. The discomfort, the strain, and failure to understand… reminds us of the dialect play of articulation—movement between two cultural zones in an effort to name the self”. This is what I think of when I think of the work and artistic praxis of Kgotlelelo Bradley Sekiti, known to most on the internet as K.Skits. “A dancer who feels that movement is an expansion of emotions and energetic alignment”,  a memory worker, a cultural and historical critic, a vessel in the questioning and reimagining of narratives of the Wretched. “I want [my work] to be an invitation for people to see me as a vessel of expression for bodies that identify the same as me, I’ve seen other individuals like me do the same thing and I’m like omg that’s so beautiful the fact that people believe in you enough to be a voice; to start conversation; to be someone that’s facilitating a conversation”. 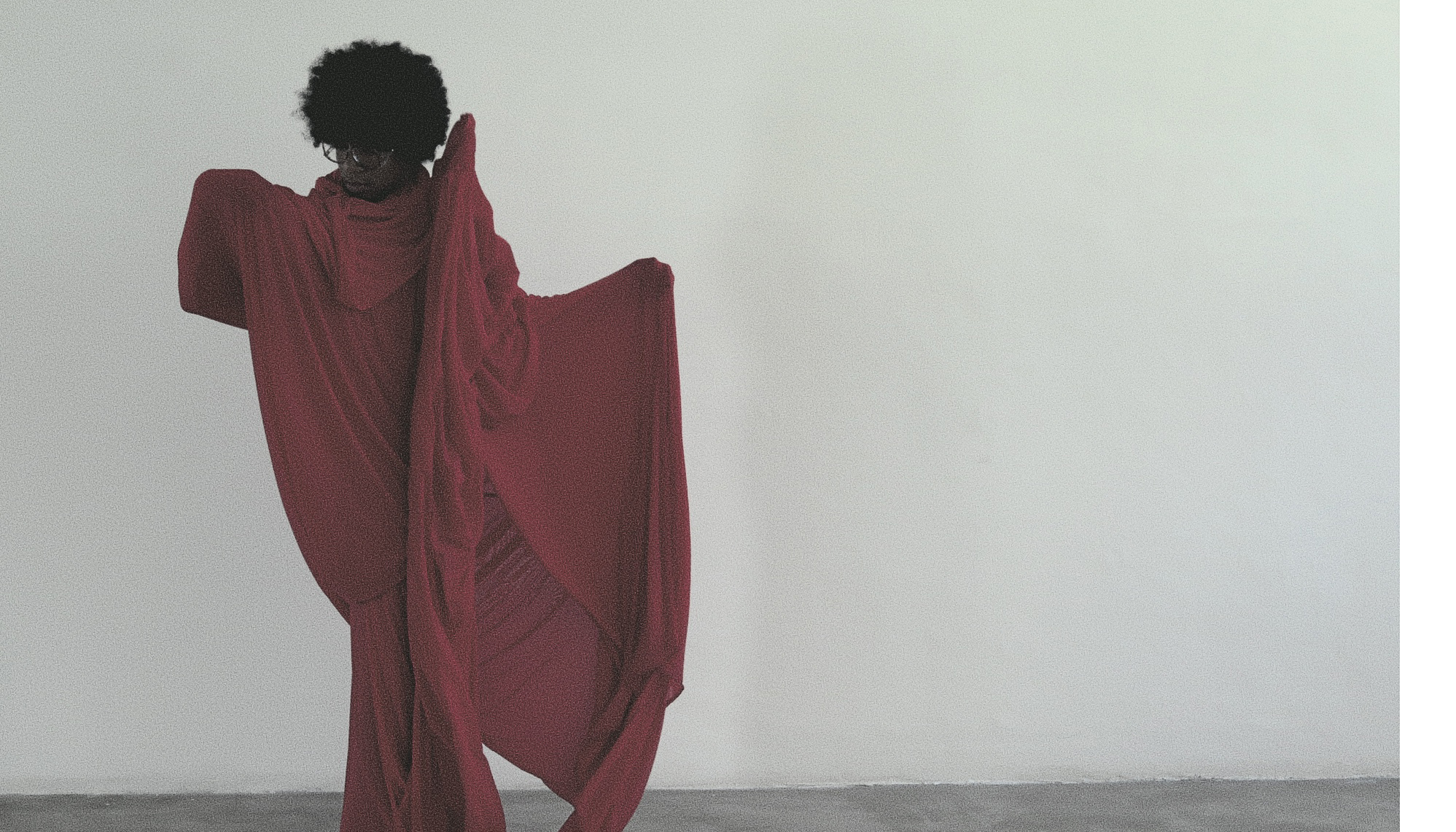 Kgotlelelo Sekiti is often contained within the checkbox of celebrated dancer and choreographer, perhaps that may have been enough in defining the scope of his practice some years ago when the now 19- soon to be 20 year old was still in high school at the National School of the Arts. Now, however, that label would simply be reductive at best; lazy if we’re being honest. While I think of Sekiti’s praxis as an interdisciplinary and intertextual tapestry of embodied theoretical and healing work which exists in the space of improvisation and performance, he is not in the least bit bothered by how people name him and how they define what he does:

“you see me as whatever you see me as and soso will see me as whatever they see me as… I like that thing of surprising someone like “oh you made that song?” “Ja ja I made that song” typa thing you know? I like pulling up. It’s a cute thing, how you see me; it’s really not my responsibility. I can’t control that; do you babes. It’s frustrating because sometimes I enter a space and I do something or I’ll propose to do something and people will be like “oh what do you know about that?””

In preparing for this piece, Sekiti and I spend a couple of days together as he makes The Black Bunny, 1//3; time spent as research; a mode of entry into his meditated-on space of creation, a collaboration in thinking- which allowed me privileged insight into his process, and access into his physical and imaginative site(s) of creation. A continuation of his Three Balloons series, Sekiti defines the performance The Black Bunny as a “mirror of a reality that houses, family, community, awareness, caution, curiosity as of a black bunny. Bubbled in one of the first balloons that will be passing through the traumas that follow black bodies. A method of finding healing”. 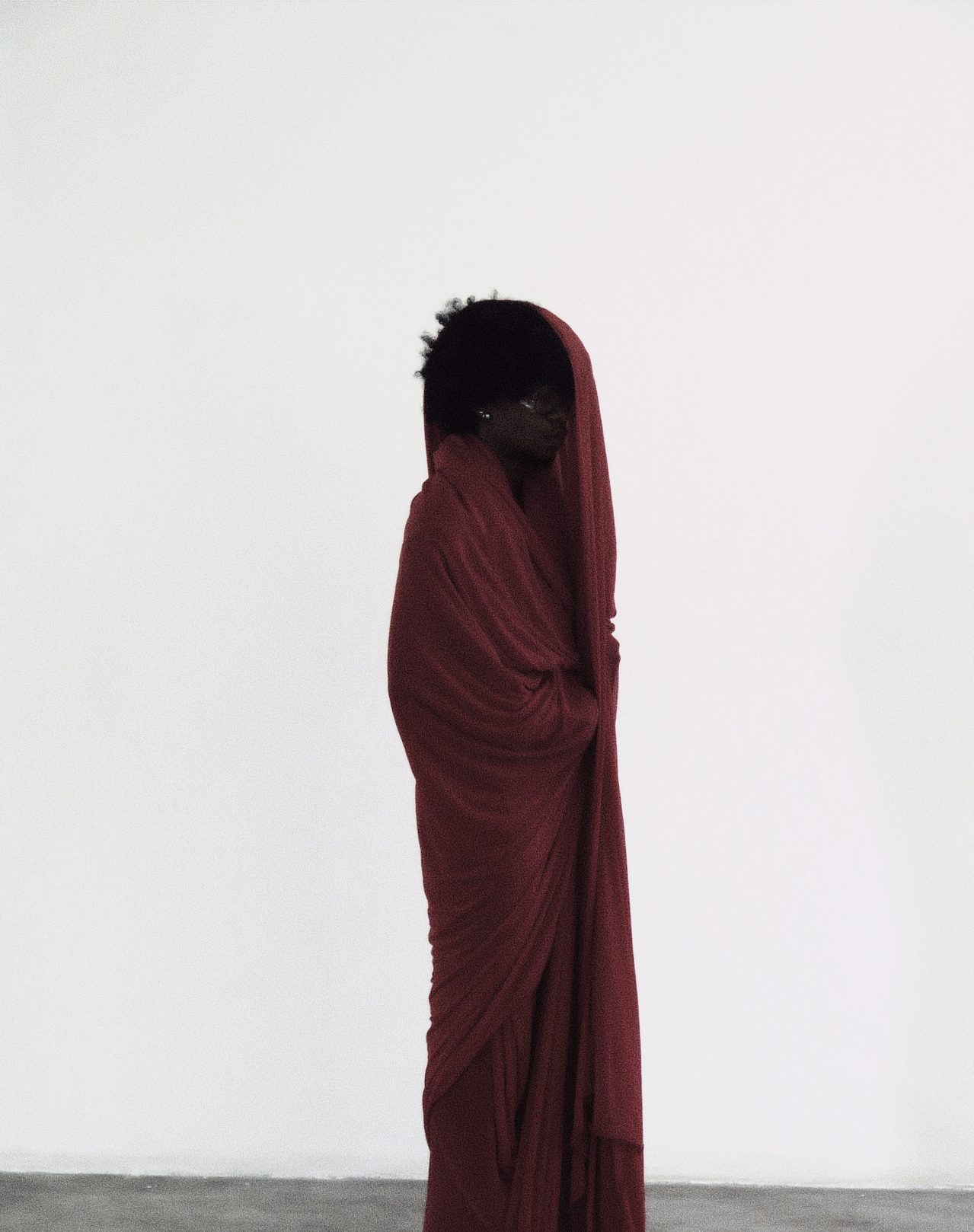 As I observe him think up, improvise and record the piece; provocations and intergenerational conversations finding articulation through his body, clothes coming off and a costume put on- or is it the other way around? His praxis fleshes itself out to me in the recess of my critical imagination as a modality of Black expression and creative criticality with no promise of arrival at a “finished” work or answer, but rather as a fabricated space of improvised subjectivity, healing and otherness-in-flux which speaks to Postmodernist articulations of the constructedness of identity. Black (w)holes thawed by his performative improvisations for “the essential black self is improvisational, that is, that the black self is, in fact, not foundational because [improvised performance] actually interrogates and subverts the search for essence”. Speaking to Sekiti, in moments between and after the recording of The Black Bunny, it is interesting to hear the ways in which this aesthetics of improvisation also mirrors the very socio-political conditions of blackness within South Africa’s tapestry:

“I think with what I’m doing now, I’m keeping that sense of improvisation cause I am used to it, like throughout my life [it’s been there]. I tried to get into dance school um and it didn’t work out because of funding and I improvised…You know how like um in primary school, skhafthini se a robeha; okay make a plan, you put that lunch in a plastic and you go to school, you know? I’m always constantly adapting into [this] situation because at the end of the day I am still black and I am still living within it… this is my truth you know and I can’t really move away from it and I have to make it work”. 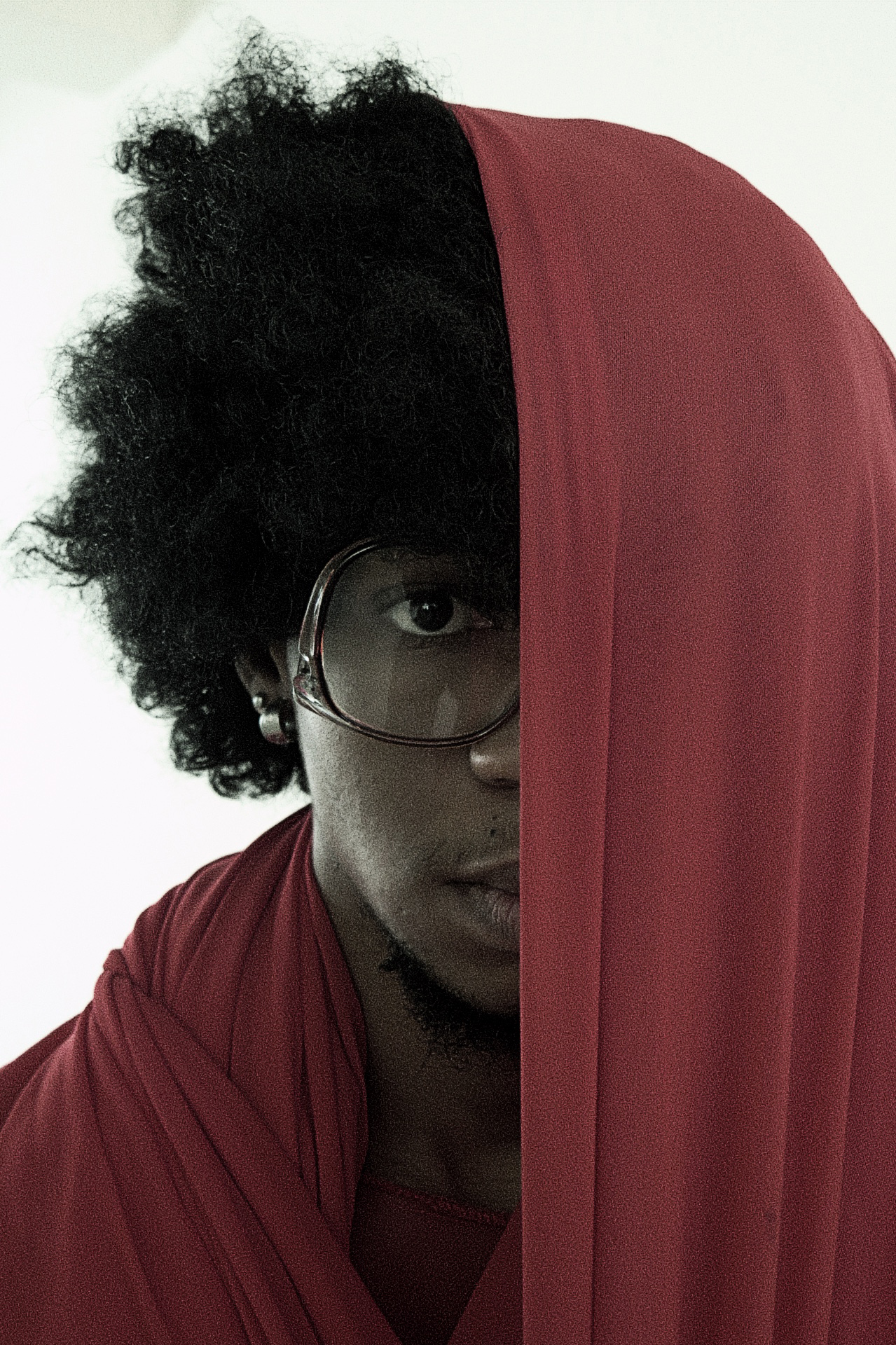 As I watch the now finished (?) 2 minutes and 27 second piece, I am greeting by the split screen which is a constant aesthetic feature in all the video performances created by Sekiti:

When I create these meditations, I get to create the two worlds that I want to travel through which is why I always have the split screen. It’s intentional, when I reflect back on what I’ve done or the conversations that I’ve had, I like to look at them from both sides. Maybe it has something to do with me being a Libra and balance. So one side is one reflection of me and the other is another reflection of me.I believe that we are endless beings so I can be in two different worlds at the same time and what better way to [portray it]  it on screen than with the split screen?”.

A dual world building tool, an aesthetic marker of oscillating states of double consciousness and in-betweeness. The passage that one were to take from one fabricated world presented to us on screen, into the other in The Black Bunny- as in all of Sekiti’s video performances, symbolises to me “an improvisational space where the [artist/performer] can merge political hopes and aesthetic ideals” and in this process of choice, movement and articulation; the self is continuously recreated. There is a unchecked passion the artist and performer holds for evolving in the possibilities of his craft although he has already achieved significant milestones. Speaking about moments of significance and self cav in his career there is both an air of cautious hesitancy and an expressed sentiment of being seen and affirmed:

“Whoooa whoo, aa I don’t know I’m very… I’m always scared of like acknowledging moments where I do well. Like honestly, I think a big moment for me was, wow, I, it’s not even an event but that sudden realisation of being able to do anything you that want to. I think um, like in the past two years, I think being able to walk into a room and say something and have people listen to [me] like that has been a moment. Like it always strikes me, like even now we’re sitting here and having this conversation and I’m like “omg this person is actually, you can hear me”.

Here is the mirror of a reality that houses, family, community, awareness, caution, curiosity as of a black bunny. Bubbled in one of the first balloons that will be passing through the traumas that follow black bodies. A method of finding healing.

Advertising// code-switching to tell you, you are OK