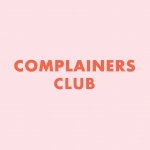 Cry laughing. That’s how I would describe what her story and choice of words did to me in that moment. She made me cry laugh. As I heard her speak about a date in which a guy called womxn “bitchy” and she responded with, a comment on internalized misogyny. But here’s the thing, it’s not what she said, it’s how she said it–how casually, how funny and how relatable. And at 6pm on a Monday evening after having the most amount of emotional turmoil run through my own life, Episode 5, ‘Show Me Your Leather-Man’ of The Complainers Club was exactly what I needed to down my glass of wine to.

In my interview with co-complainers, Nadine Mohamed, Ricky Chasumba and Olivia Mortimer (TCC) they explain what the podcast is, “The Complainers Club is a comedy podcast that invites listeners to relish in the most delicious pastime – complaining- for comedic relief and a form of catharsis, or unpaid therapy. We focus on current socio-political topics through the narrative of each members’ personal experiences.”

Initially started as a WhatsApp group, the complainers are now on air (as of 6 June 2019), sharing their opinions with wider audiences. The title of the podcast took its inspiration from complainer Nadine’s mother who regularly told her to “start her own complainers club”.  At the outset, the complainers were only Nadine and Ricky. However, Olivia joined the club after having what I assume to be, a successful breakfast date with Nadine. And Ricky and Nadine?–well they are a Tinder match (who are now friends). “What connects all three hosts, as well as many people, is a love to complain about things that essentially each would like to change for the better.”

While preparing to interview the three I did some digging and noticed that there is an almost incessant use of the word ‘perils’ specifically within episode descriptions. Asked about this they share with me, “Nadine has a fascination with the word peril because she’s an existentialist and an anarchist; she wedges it in everywhere she can.”

So why complain? “We want to cultivate a healthy complaining culture that helps identify the problem, assess the problem and to find ways in which to resolve or alleviate said problem. There’s nothing wrong with complaining- there’s something cathartic about complaining and we want to be that place that allows you to heal. We also want to make people laugh at ourselves, themselves and human nature in general.”

I would briefly unpack what each episode is about but instead of ruining it for you I’d suggest that you go and give it a listen yourself. From traffic department dilemmas, to horoscopes and open relationships the themes that the show delves into in the form of personal reflection is boundless. Maybe I’m just biased because I think complaining is great, but honestly, I don’t know what I’d do without this podcast. It’s a platform that reminds me that complaining is fine, healthy even, in a society that constantly tells you that you should just be happy all the bloody time. Nah…

Anyway… listen to my three favourite complainers say it like it is on Spotify.

Olivia Mortimer: Thinking about the female gaze in film