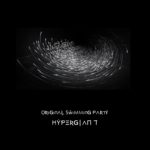 I interviewed the guys from Original Swimming Party to chat about their debut full-length album ‘Hypergiant’.

Tell our readers a bit about Original Swimming Party.

OSP is an experimental audio-visual duo from Cape Town, comprising Thomas Glendinning and Jeremy de Tolly. We started in late 2013, based around a love of electronica, ambient and experimental music. We have since evolved to include African and South African musical influences, hence the term ‘Afrotronica’. Since our inception there has been a large visual element to our live shows – we work with projectors and screens to drench ourselves in beautiful, curated visuals that support and enhance the music. We have worked with numerous visual collaborators to create and perform our material, most notably Frank Latter, Thom Dreyer and Kevin Townsend.

Tell our readers about the thinking behind the name of the album, ‘Hypergiant’.

A hypergiant is the largest kind of sun. Since time immemorial the sun has been worshiped in human culture for good reason. Those photons keep us warm, grow the plants, power our lives. So it’s a symbol of God, of life, of the fire within and a statement of intention of how big we wanted this album to be.

Tell our readers about the creative process involved in putting the album together?

The album is the product of ceaseless experimentation and many happy accidents. Basically our process is to explore. Give birth to sound-children, and let them into the world, nurture and grow them without judgment. Some of the children make it onto the album. Some go elsewhere, to play forever in the happy cloud. We also made music that satisfied us. We had a GREAT time writing this and it felt really satisfying, genre defying. It’s the best music we were capable of at the time, and the sum of both of our inspiration, playfulness, heart and soul, our musical crushes and influences , and all of the good things that happen through pitching up.

Tell our readers about the kind of dichotomies you address in the album (loneliness and joy, a feeling of things ending but a celebration of life, etc). Is this a kind of broader commentary on where we are as a country/globally?

Yes, so many dichotomies. We do tend to oscillate between macro and micro perspectives. So we delve into our own humanity, which sometimes feels silly and self indulgent when set off against the macro perspectives of loveless politics, economic inequity and pending environmental apocalypse. But there has to be a place for both.

You also address topics such as colonialism, dispossession, privilege and indigenous history in some of your tracks (both lyrically and sonically – ‘Life In The Colony’, ‘ Camissa’). Tell our readers about these tracks and addressing these issues.

As two white South African males born inheriting the ample fruits of apartheid, we’ve found the last few years very challenging, at least from the perspective of finding our place in the scheme of things. We’ve been somewhat schooled by the #woke and #feesmustfall movements, but have come up embarrassingly short of being part of the solution. So these aspects of the journey are documented in some of the songs. We feel strongly that the heinous consequences of apartheid and colonialism must be addressed. In Cape Town particularly, we are faced with just how toxic and repressive the system remains for people of colour every day, and feel ourselves part of the problem, but what are we doing to change things? What are we prepared to give up? It’s both threatening and humbling. We’re clueless but keen to take part.

Tell our readers about the musicians you featured and your decision to feature them (Greg Abrahams, Keenan Ahrends, Gene Kierman & Ryan McArthur).

We love working with collaborators because it gives us unique inspiration. When it’s just the two of us writing we can very quickly get tunnel vision and get stuck using the same sounds so bringing in a collaborator brings a fresh perspective and can often bring new life to a track. When the band started we were initially a 3-piece, with Greg Abrahams as a full time member. But as he’s become too busy to work with us full time, we work with rotating 3rd members (not literally) to add to the sound of the band.

Tell our readers about using everyday sounds in the tracks as well.

We’re both very passionate about sound, not necessarily just music, and so we’re very interested in capturing and working with non-musical sounds (often called field-recordings). The field recordings sonically add character to the pieces but they also give thematic context, for example on the track ‘Camissa’ Tom went down into the water tunnels below Cape Town to record sounds. The water in the tunnels comes from Table Mountain and is the remnants of an ancient river that ran through the city and so in a way captures some of the history of Cape Town.

Are there any tracks that have a special story to them?

‘Camissa’, as mentioned above, features unique binaural field recordings of the water tunnels below Cape Town. Binaural recording is a technique used to capture sounds in the way that the human ear hears so that when it is played back via headphones the listener feels as though they are in the actual recorded space. In ‘Talk To Us’, Jeremy was meditating in Newlands Forest and recorded the sounds of the creatures that were clearly trying to say something unfathomably beautiful to him.

Any plans for the year you could let us in on?

We have a music video in the works as well as several remixes and alternate versions of the album tracks. We are also planning an international tour for mid-year.

Anything else you would like to mention about the album or OSP?

Tom moved to London at the beginning of the year so we are currently a ‘long-distance band’. That has its struggles but fortunately with modern technology it’s relatively easy to keep up with what we do. We have regular Skype strategy meetings and even finished the last 20% of the album remotely. It’s also a huge opportunity for us to take our special kind of audio visual love to the northern hemisphere.