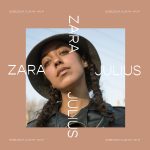 Zara Julius is a graduate of social anthropology, religious studies and photography. She’s gone on to become a multidisciplinary artist who produces visual art in the form of photography and film in detail-oriented ways that are specific to her focus on creatively presenting her findings on post-apartheid and diasporic identity. In a chat about her vinyl selector DJing career, we learned that it’s something she enjoys doing at her own cozy, leisurely rhythm, “I want my DJing to be as comfortable as possible for me. I don’t want to place excessive amounts of pressure on myself and I don’t want it to feel like work.” With the world of success at her feet, I find out how she got into it and where she hopes to see it take her in the future.

She started the craft of vinyl selecting at 21 and 6 years later, her skill has seen her travel to Colombia, Cuba, the UK and different parts of South Africa. “I don’t think vinyl selecting is something that’s accessible at all. It’s very expensive.” She goes on to say that her other fields of work availed her the privilege of traveling in her youth and she was afforded her the chance to collect vinyls at discounted prices around the world but also, at a leisurely pace. Her musical style is inspired by cultures of the Global South and she maintains that she’s not genre specific. If one were to try and quantify her style in music, it would be Pan-African, ethno-jazz and traditional dance music originating from a variation of countries in the Global South.

“I don’t think of any of my art forms as separate entities; they all interact with each other in all the work I put out.” Her study choice in social anthropology re-surfaces in the ways she executes her art. “I’m interested in people, in their history and in the formation of societies and when asked what her favourite city to play in was, Zara said all of them but one or two stood out for her. “Each city comes with its own unique experience. I loved playing in London; the crowd was extremely receptive.” She retells the story of playing in Colombia where she says the crowd, usually accustomed to couple dancing, was interestingly acclimating to solo dancing during her set. It was strange for her to play for a crowd that didn’t know how to dance to her music but it was great fun, nonetheless and an experience she won’t soon forget.

A Zara Julius mix is transcendental, deeply saturated in culture and evokes a hip-swaying, trance-like mood in listeners. With a collection of music ranging from soft reggae, to traditional Colombian genre, Cumbia, to Maskandi it’s easy to hear her intent in bringing the sounds of the Global South to light in a way that isn’t challenging to listeners but rather inviting.

A woman so astronomically gifted, her name is Deniece Marz

‘The Rave Princess’ of the future: River Moon on her rise to becoming the electro music superstar of the galaxy

Sainty Baby is the Fierce Lesbian Rapper She Dreamt About