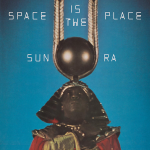 Open chrome, google Afrofuturism, click images – what you find is images of disembodied faces with rings around their heads, complex headpieces and third eyes. These figures seem to be floating in space and are often illustrated or abstracted to the point that they don’t actually seem real. If Afrofuturism as an imagination is meant to be an emancipatory practice for Black people across the world, then it is failing. Black people are still not seeing themselves within the realm of the future but instead seeing illustrated cyborg-like forms of their images.

Afrofuturism has been defined and redefined over the years, but a general understanding is that at its core it is an exploration of futures or possible futures where the intersection of art, science and technology finds its premise from or within black subjectivity. In its most basic (and least helpful) form it concerns itself with cultural aesthetics (particularly of the African diaspora) and in its most comprehensive form it concerns itself with the questions: “what does it mean for Black people to have a future?” and “how are Black people represented within different realms of time?”

Afrofuturism as an artform, practice and methodology that allows black people to see themselves in the future despite a distressing past and present.

What happens when an art exhibition space and residency programme organises an exhibition on Afrofuturism and fails to include Black artists…..in 2019? The Künstlerhaus Bethanien staged a show (opening July 29th), curated by Christoph Tannert. The exhibition, titled Milchstraßenverkehrsordung (Space is the place), takes inspiration from billionaire Elon Musk and Sun Ra and includes 22 artists (18 white men, three white women, one artist of colour; Song Ming Ang and no Black artists). The exclusion of black artists from a show that claims to explore ‘cosmic expectations regarding the idea of socialism’ can be read as a second form of violence; not only are Black people systematically oppressed and excluded, but the philosophy that has the ability to emancipate their imaginations is used as a tool to further exclude them. Over and above this, the failure to consider the complexities of linking Musk’s endeavours (which have been read as a “colonisation of new frontiers”) side by side to Su Ra is also deeply misguided.

If, when we think of Afrofuturism, we think of Mark Dery (who is credited with coining the term) or we only see cyborgs, trendy black youth in sci-fi aesthetics or Elon Musk then it seems fitting to wonder: Afrofuturism for Who?

The earth deteriorates into landscapes of the underworld with ‘Persephone’

Warther Dixon – explorations of the self and the soul