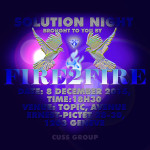 The Cuss Group, co-founded by Bubblegum’s own Jamal Nxedlana just released an invitation for “Solution Night” an event they are hosting at the TOPIC project space in Geneva, Switzerland. The Cuss Group is comprised of Jamal Nxedlana, Ravi Govender and Zamani Xolo who founded it, along with Lex Trickett and more recent addition Chris McMichael.  The invite is accompanied by a series of celebrity testimonials together with an ominous text which you can read below.

“Daily life is a space of  intense  contradiction.  The promise of infinite self-actualisation and attainable dreams runs alongside the constant coverage of violence and panic.  People are constantly told they can become and achieve anything while seeing evidence of the depths humanity can sink too.  The latest fashions and music next to the latest atrocity footage.  Glaciers of jewellery on Instagram, melting glaciers in the artic.   Drone selfies, drone assassinations. Gangs post pictures of money, kidnappings and executions on facebook. Social media, Narcomedia, Necromedia.  Livetweeing from the back off the bus while it rolls off the highway, lighting for the disaster provided by etoll grids.

The surface is chaos which threatens to tear the individual apart.  But this is an appearance which disguises another reality. The individual now has more power than ever, to build or destroy, from behind a screen.  No need for constant doubt, just pure focus. We understand only ‘yes’ and ‘no’. Only ‘black’ and ‘white’. No ambiguities. No half-tones. No equivocations.  Pure will, pure power for those who dare to grasp it”.

We’re here, we’re queer and we’re having a ball!

With the upcoming release of Thundercat’s next studio album, It Is What It Is, the Los Angeles based bassist/songwriter has teased us with t...