Multimedia artist from Dar es Salaam, Rehema Chachage uses video and sculptural installations as her chosen mediums to communicate her own experiences, and those of other women, casting a light on rituals of survival and subversion.

After her father passed away she began to interrogate ideas around inheritance in Tanzanian societies, seeing the most valuable inheritance from her father was his intellectual work. Her father, a University of Dar es Salaam sociology professor worked briefly in South Africa and had some struggles which he expressed an extended essay. This resonated with her while she was studying towards her fine art degree at the Michaelis School of Fine Art at UCT. She felt like a stranger, an outsider while living in Cape Town. Her earlier work channeled these feelings of social alienation, allowing her to critically analyse themes related to identity and (up)rootedness.

The work she has produced since graduating looks at rituals as valuable tools for reading into social norms and tensions, closely examining those that speak to women’s identities, gender relations and subversion.

A powerful series of works was born out of her time spent in Gorée island in Senegal where she came across a text that explained how pregnant slaves were punished. “They were given 29 lashes but before they were whipped the slave owners would dig a hole for them to rest their pregnant bellies in. So whilst they were delivering their punishment, they were also protecting future slave power. This stood out for me. The 29 lashes is not really a ritual but I see it as an adapted ritual, because it was an everyday reality for these woman,” Chachage explained in an interview with Urban Africans. This, along with the experiences of her mother and grandmother, inspired the idea to explore 29 ways women can use different females rituals rooted in Africa to survive and subvert power in patriarchal societies.

Mshanga produced in 2012 is an example of this work. Delving into the nuances in gender, generation and poverty, it tells the story of her great grandmother Orupa Mchikirwa. As a woman who had to look after many children and grandchildren, she would often sacrifice her own food, leaving her feeling hungry. To avoid being consumed by her hunger she would tightly wrap a cloth called ‘Mshanga’ around her, squeezing her stomach.

“…the stomach, for our bodies, is the centre of equilibrium, and normally loosens up when we are hungry. So, in order to retain strength (when hungry), it helps to have it tightly and securely tied. Traditionally, in Tanzania, women tie ‘Mshanga’ (as ritual) around their tummies when they are bereaved. And, historically, in some traditional African societies, the rite of passage from boyhood to manhood, involves a ritual that simulates warfare. Boys enter into the forest through a gate, expected to return through the same gate as men carrying with them ‘the secrets of the forest’ in which one of them is sacrificed. In the meantime, every woman with a son in the forest has to tie a ‘Mshanga’ around their bellies, hoping her son ‘returns’. If their sons return home safe, they will have a celebration with singing and cheering whereby the ‘Mshanga’ is untied. If the forest ‘swallows’ her son, the ‘Mshanga’ continues to prop the mother’s tummy as it helps the forest maintain the silence.”

This explanation of her work from her website connects the series to her exploration of rituals for survival and subversion used by women. It also highlights the significance of the mshanga being the cloth used by her great grandmother, carrying with it a heaviness as a sign of suffering. 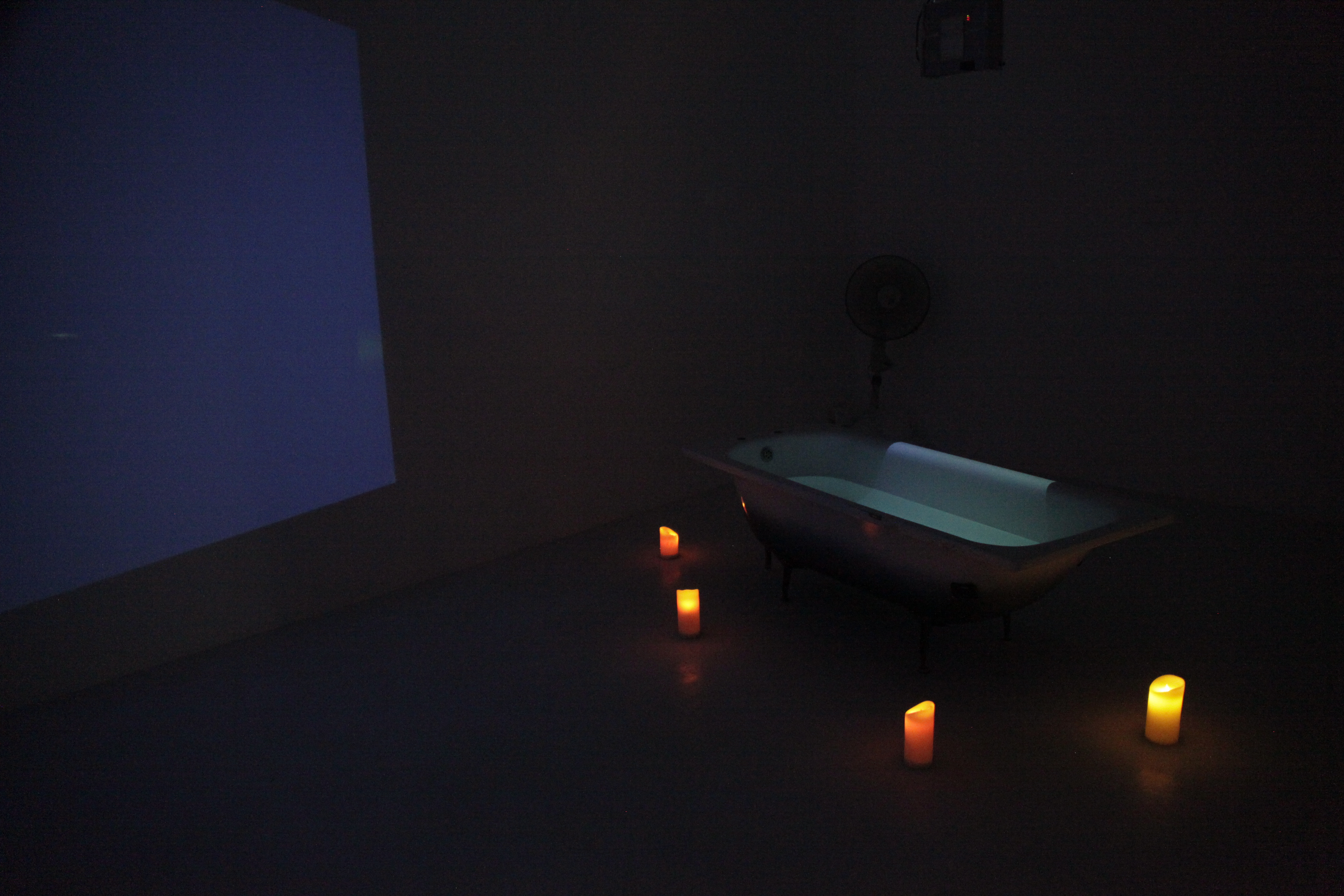 Chachage’s work PART III: NANKONDO (2017) created in collaboration with her mother, who provides textual responses to her visuals, speaks to her interest in intergenerational conversations, as well as looking at sexuality and gender. “In this work, we explore African spirituality, following a story of my great grandmother, Nankondo, whose mother disappeared a long time ago, and she is believed to have been captured and taken into slavery. The religious fanatics in her village believed that she is to blame for her own capture, her being a woman of ‘low morals’ due to the fact that she used to sell beer to men until late hours,” Chachage explains in her artist statement. The work existed as an installation, a shrine created for Nankondo, made up of a video taken during a prayer session, as well as a projection of a letter written by Chachage’s mother on to a bath filled with water, surrounded by candles. “The work as a whole tries to make sense of the self-loath and spiritual abyss as displayed by modern day religion.”

Chachage’s choice to explore 29 different rituals performed by women is a subversion of its reference, speaking to the resilience that women embody, making their stories prominent narratives in history (herstory).