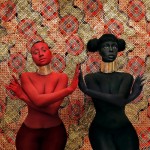 Noirwave is telling the story of black glory, of Africa, through art. The creative collective of Petite Noir and RhaRha Nembhard form the heart of Noirwave and their collaboration with Lina Viktor reveals the beauty and diversity of experience that is being African.

While the immorality and brutality of imperialism perpetuates much pain and suffering on the continent, its people and geography are more than elements or victims of an imperial agenda, or beneficiaries of international aid. Africa, Africans and the African diaspora make incredible contributions to the world’s culture, colour and creativity. From the Americas to Europe and the islands through which black people are positioned, we make the music that the world dances and drones too. And while our images are often used against us, the beauty of black people, the potency that melanin projects is undeniable, despite the hegemonic mission to make mockery of it.

Blackness progressively makes strides, against the forces that oppress and divide us. And as black people continue claiming our right to be ourselves without apology, there are black artists working to create reflections of blackness and Africa that are based in a perspective that educates and empowers. Enter Noirwave, a movement and collective making strides  towards progressive representation and integration of black identities. Synthesizing politics, art, fashion and music to tell a story about the incredible beauty of Africa and the diversity of experience black people exist in on the continent and beyond.

Noirwave breaks the boundaries between the stereotypes and archetypes of Africa, projecting images that are progressive and positive. Africanness and blackness are not monolithic constructions of colonialism but shifting, complex identities and cultures that are also subject to the influence of the internet and form an important part of the international community. All of the above should go without saying, but the hegemonic powers that determine what we see and hear and consume would erase this unalterable truth if they could.

In 2015, Petite Noir, RhaRha Nembhard and Lina Viktor produced images and sounds that subverted the status quo and offered a view of blackness that reflected Africa, Europe, America and Asia, that vivified the experience of walking the world in black skin while being a global citizen, reflecting the progressive forces that are working to unify humanity, as well as the historic fact that Africa is the home of humanity.  The video for Best, touches on the striking and emotive themes encapsulated in La Vie est Belle, Petite Nior’s critically acclaimed debut album. The artwork and music video for the album are rooted in Africa and use influences from artists and cultures the world over to tell their story. Noirwave offers the world beautiful music and visuals to enjoy and admire from a creative consciousness that upholds black beauty and promotes black love. The importance of these ideals cannot be underestimated in a world that tries to erase and divide us. So the struggle continues with new sights and sounds to take us into a noir future.