It becomes a shame when life’s most profound truths are so widely shared, and in so many various forms that they almost become reduced to background noise. For instance: there are a million quotes and feel-good coming of age movies to drive across the point that life is about “the journey and not the destination”. It’s difficult to meaningfully engage with the idea when it seems to be the go to moral of family orientated Hollywood productions, but there really is something to be learned. It helps that every once in a while, a voice will pierce through the density of the background noise with some clarity of resonance. In her systemic-madness approach to art, Katharien de Villiers is that voice. I spoke with de Villiers over a Zoom call, where we discussed her latest exhibition sound-blindness. The exhibition acts as the latest and last instalment of the Circle Series hosted by A4 Arts Foundation in Cape Town, and is curated by Nisha von Carnap, who joined us in conversation. I spoke with the duo about sound-blindness, which had originally been meant for exhibition in April of 2020. After 10 months and several lockdowns, sound-blindess was ready to be shown to the world. And what the world would see — from inside A4’s library — would be an insight into the internal workings of de Villiers’ mind. “I decided to start collecting all the literary influences of what has turned into a 10 month period. So everything that I’ve read over the last 10 months has been included in the library,” she starts of by saying. Alongside the regular collection of books in A4’s library are the various muses behind sound-blindness. 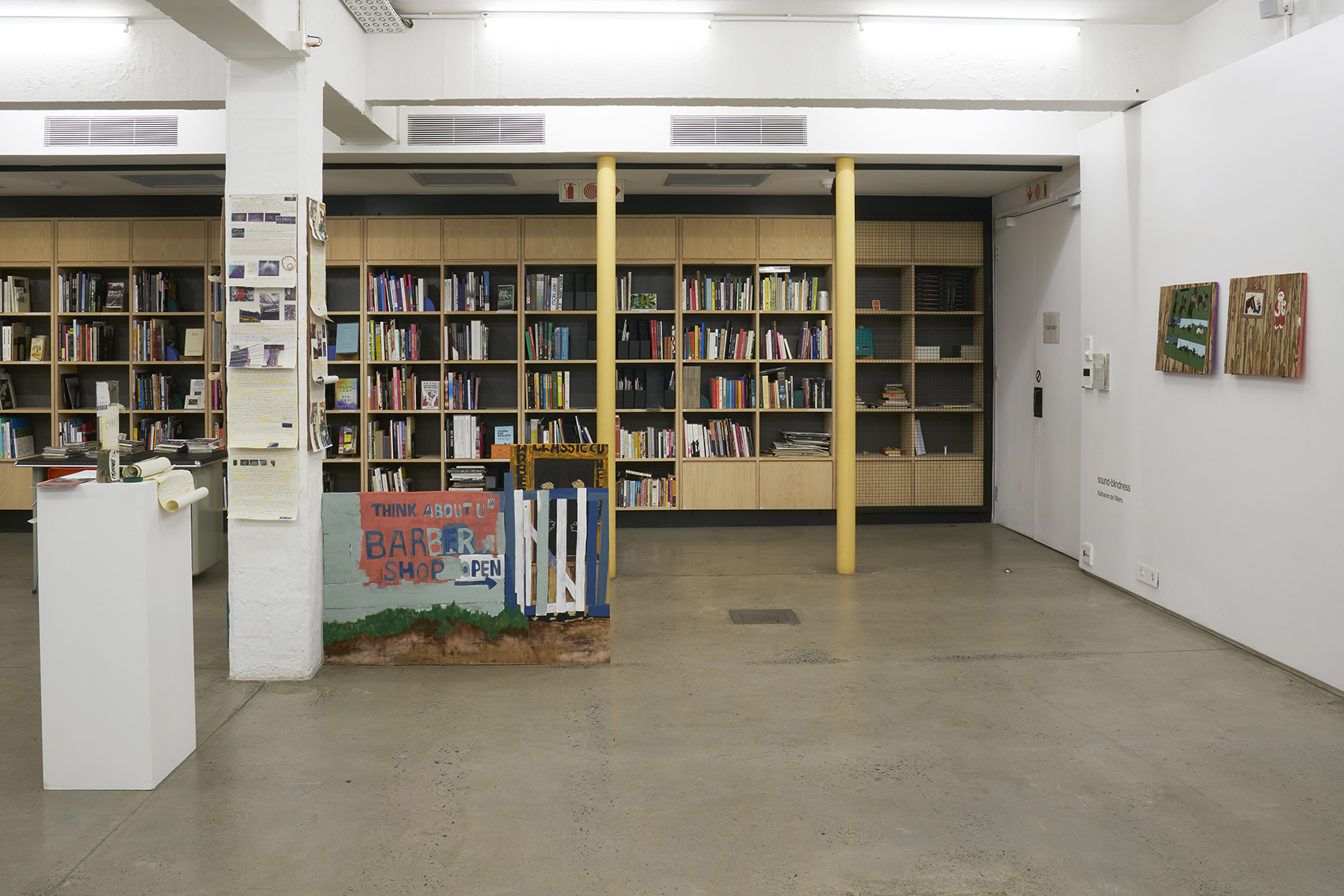 Amidst the masses would likely be some anthropological texts, with “sound-blindness” being an anthropological term. “The term looks at how we experience,” she explains. “So we speak, and experience, and look, and digest based on a whole bunch of things that make us up. All these experiences I’ve had for the past 30 years, since I was born, adds up to how I now look at the world. sound-blindness doesn’t try to be fully inclusive of all those 30 years. It goes beyond simply recalling events through photographs. Katharien speaks of it as an act of “re-remembering”. For Katharien, the act is about “not doubting your memory. Allowing it to be volatile, which I find exciting in my practice.” In embracing the volatile, what we see before us is de Villiers’ attempts to trace thoughts and memories. Describing it herself as rhizomatic; each individual artwork has a number of different entry points. Booklets available at the gallery reveals that a young Katharien used to look at her father’s engineering table, where he would scribble all his figures and calculations all over the table’s surface. Layers and layers of koki, tracing projected trajectories. At this stage, one would assume the takeaway from this is the emotional roots of the exhibition. After all, beyond the books, there is the assemblage of countless photos dating years back into de Villiers’ life. Yet, all this considered, de Villiers doesn’t think of the exhibition as emotively driven. “I try and work with very familiar subject matter and focus on how I make art. The process becomes very pivotal if you want to find any meaning in it,” she shares, after having toured through the space, bringing attention to the draping fabrics, doodles of children and items she’d found outside of churches. 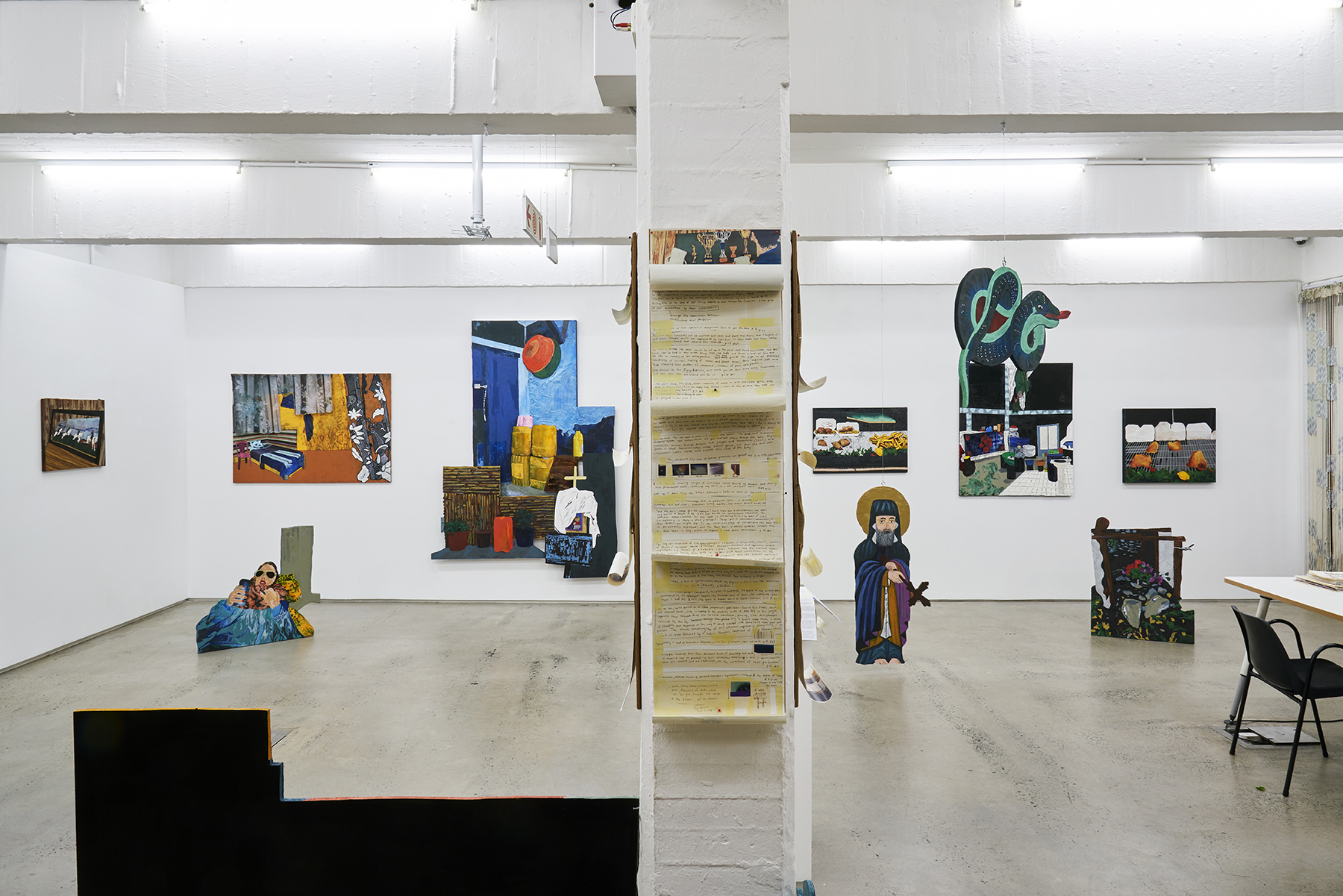 This circles back to the issue of the journey vs the destination. de Villiers is fully invested in the journey. Virtually walking through the gallery, you’re touring memories of her life. Posted up on a wall are the notes from her Master’s thesis. Not too far off — in a darker corner of the room — are several paintings of what could be lunch, with slap chips and fried hake imposed upon black rooms. Even the choice to use black is tied back to memories of art she’d seen in Ethiopia; a trip which has come to influence her practice. Never before had she used so much black paint. The paintings don’t become a void thanks to the various textures she created on them, differentiating all the black tones. Her trip to Ethiopia ignited an interest in a type of artistic style that uses black outlining to attribute importance to religious iconography. When she pointed out the black outline around the hake, I couldn’t help but ask why?

I think that’s one of the power moves that the artist had. I was born and raised in Cape Town and I always found it fascinating that art is so high end and is so inaccessible to your normal man in the street. I actually started finding it incredibly boring walking into a gallery and finding things that you don’t find everyday but somehow they’re now moerse important. And I like the fact that I have the power to make something important, just by placing it in a gallery space. I’m making it an academic phenomenon that there exists something like deep fried hake, and I enjoy that… 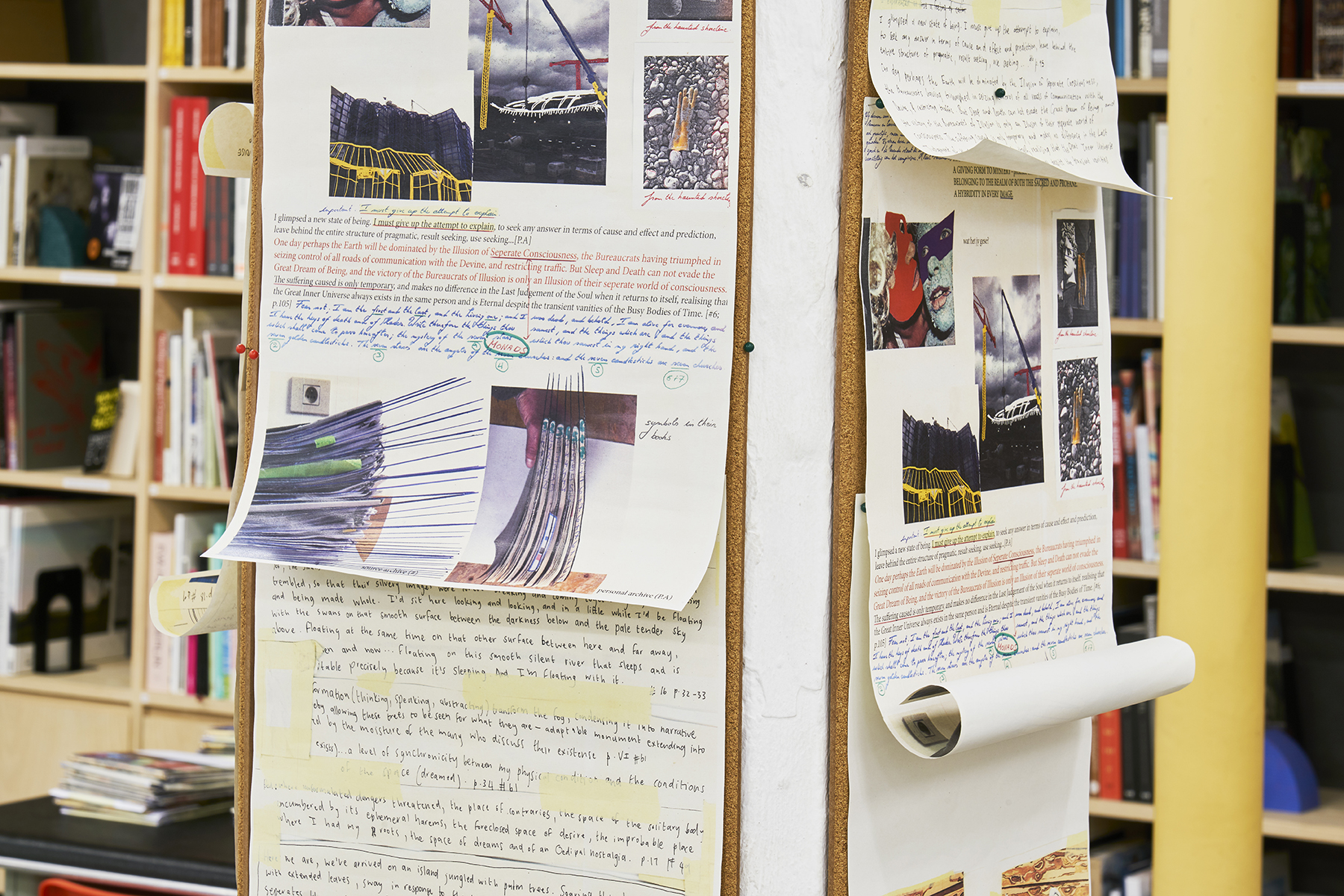 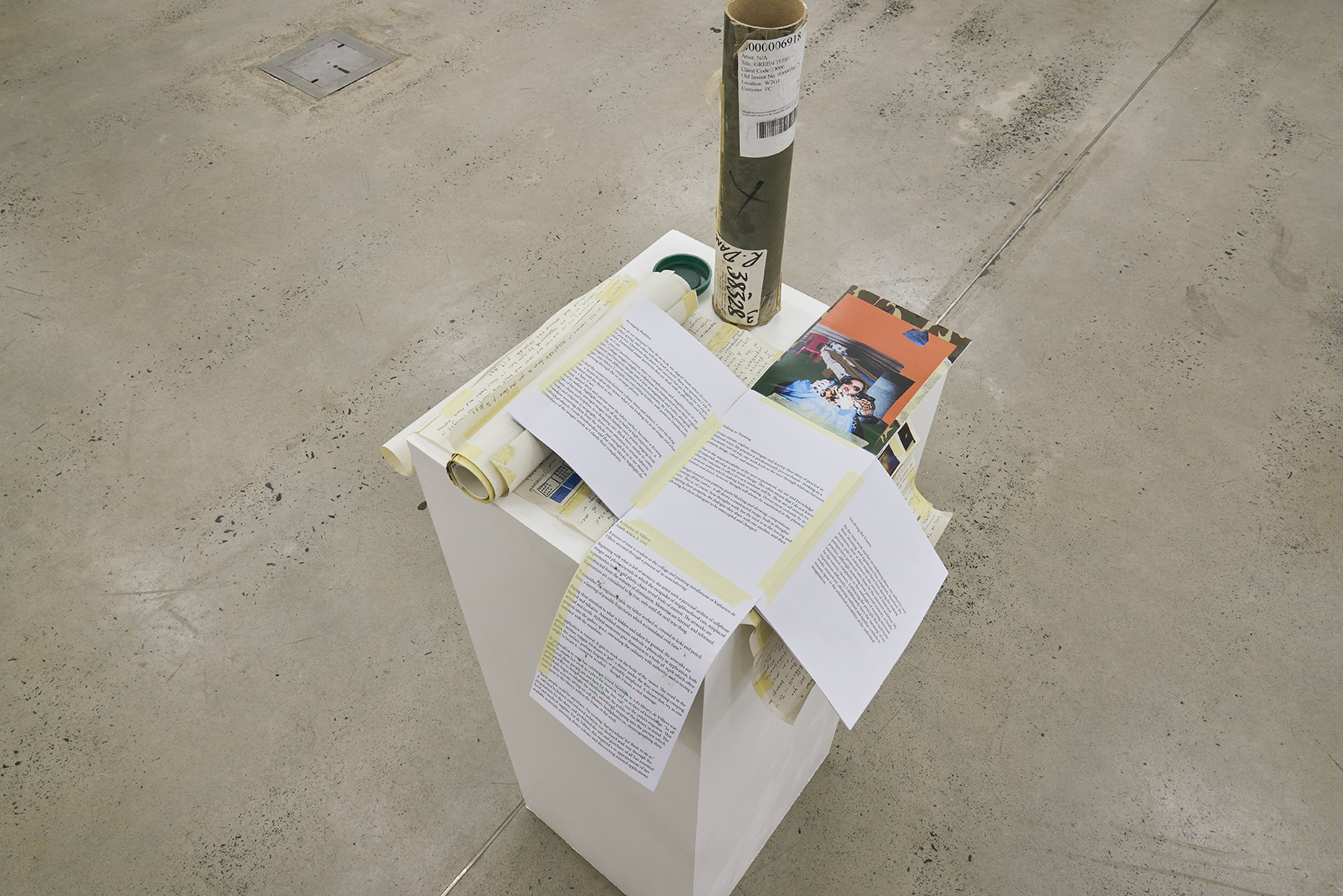 Katharien de Villiers, A Conversation Between Ourselves and Our Others (2015)

With sound-blindness, your normal man on the street who enjoys deep fried hake now has an opportunity to walk through the library-turned-gallery space and engage with de Villiers on the subject matter. She embraces the fact that the journey might lead them to different destinations; within the same space. With gallery spaces being sites of projection, de Villiers understands that the viewer will come to their own unique meaning. For her, it’s a liberating and privileged experience to conceptualise and work on a project for so long and then having others take what they will from the experience. In a way, sound-blindness then becomes something which can’t be placed in a box. de Villiers allows the audience to continuously give it new life in their experience of it. To create this new life, a certain degree of force is required. Confronted with collaged images — playing on realism with the familiarity of certain objects while also being surrealist in their strange settings — one has no choice but to force connections. de Villiers believes its something we can’t help as people. “It’s really about forcing connections,” she explains. “Connections and relational possibilities can be forced.” As a viewer, I naturally connect the Ethiopian tombstone in the centre of the floor to the priest that stands before it. I would never have known that Katharien had intended for it to be the figurative resting place of Ghadafi’s mother — Ghadafi who is on a large photographic portrait on an adjacent wall — and was unable to attend his mother’s funeral as a result of being in prison and the adapted COVID-19 policies. 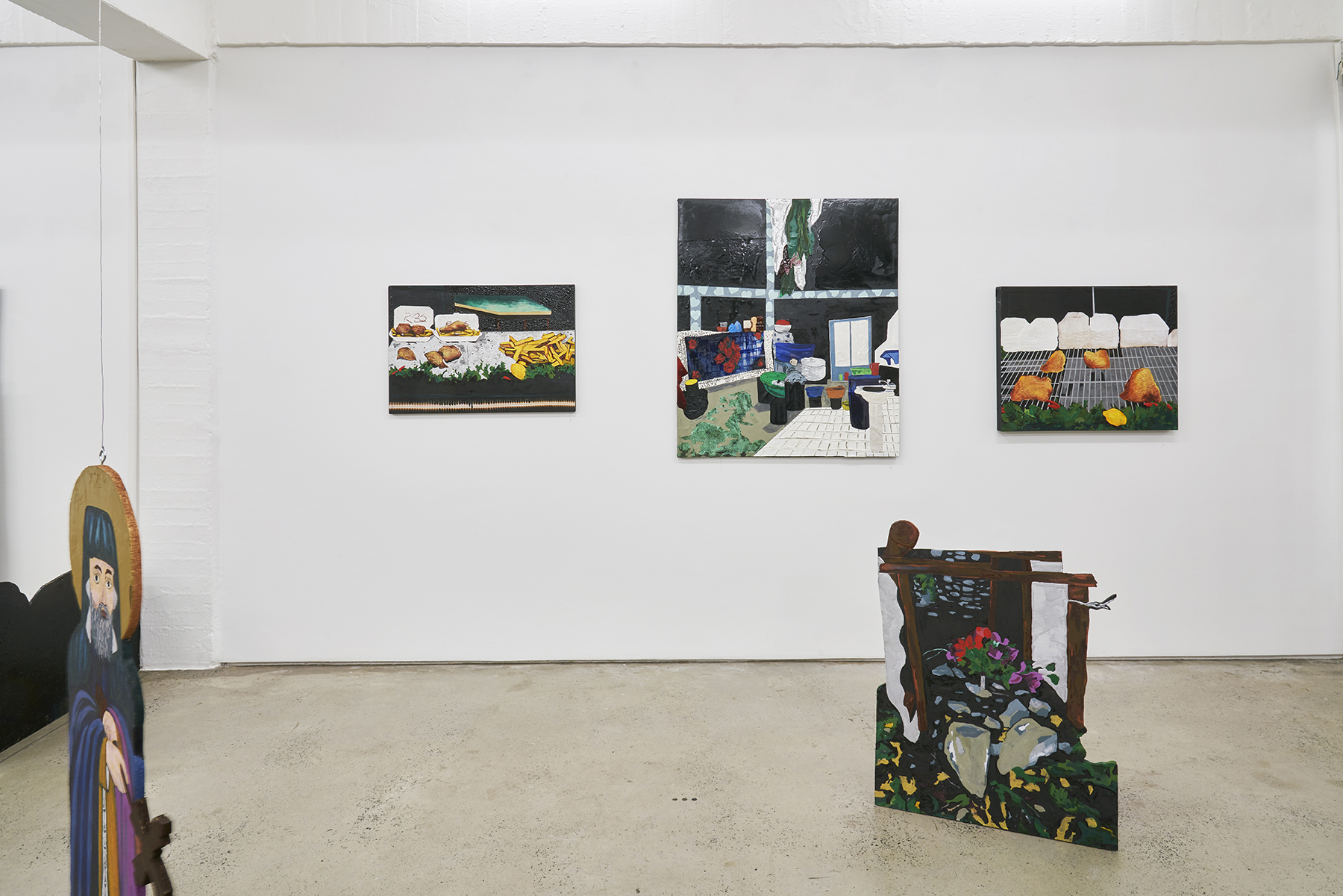 Katharien speaks of an equilibrium of symbols, and how the possibilities of what they are symbolising are so vast. In the vastness of a possibility pool, relationships are constructed between the different symbols. From a curatorial perspective, sound-blindness opened von Carnap up to new possibilities in an era where so many restrictions exist. “So is there a way to integrate the artist back into the work, and give Katharien the space and the time to reflect on the work as an entire thing and not only as singular artworks?” She asked herself, in conceptualising the series. “And what does that do?” Walking alongside de Villiers, these were just some of the questions von Carnap posed, with de Villiers enjoying questions which don’t necessarily have any answers. Rather, as the work developed, the questions would too. For de Villiers, there has been one constant:

Since I can remember, [my feelings on meaning] [have] been my entire obsession in life. Since I was a little girl even. It was always about the fact that I’ve found truth to be a bullshit story, because it’s so subjective.

Find out more about Katharien’s Circle Series on her A4 Art Foundation page.