Callan Grecia’s exhibition title, Laps Around the Sun, lends itself to the artist’s hefty post-internet lexicon of signs. Suggestive of the moment when life relinquishes its rose-tint and the arbitrariness of existence begins to take form, the title is both poignantly nostalgic and existential. Birthday… after birthday… after birthday, existence becomes automated: a non-reality considered only in reflection. Grecia jolts the viewer from this cynicism, and into a space of sentimentality; teleporting us back to being behind a box computer or game boy in the early 2000s. Rather than being surrounded by the white noise of Netflix, here, we routinely wake up at 6am to watch our favourite cartoon with sugary cereal and a heat sensitive, colour-changing spoon in hand. His work reimagines a time when hours spent on the internet or in front of the TV felt excitable rather than accumulative and wasteful. 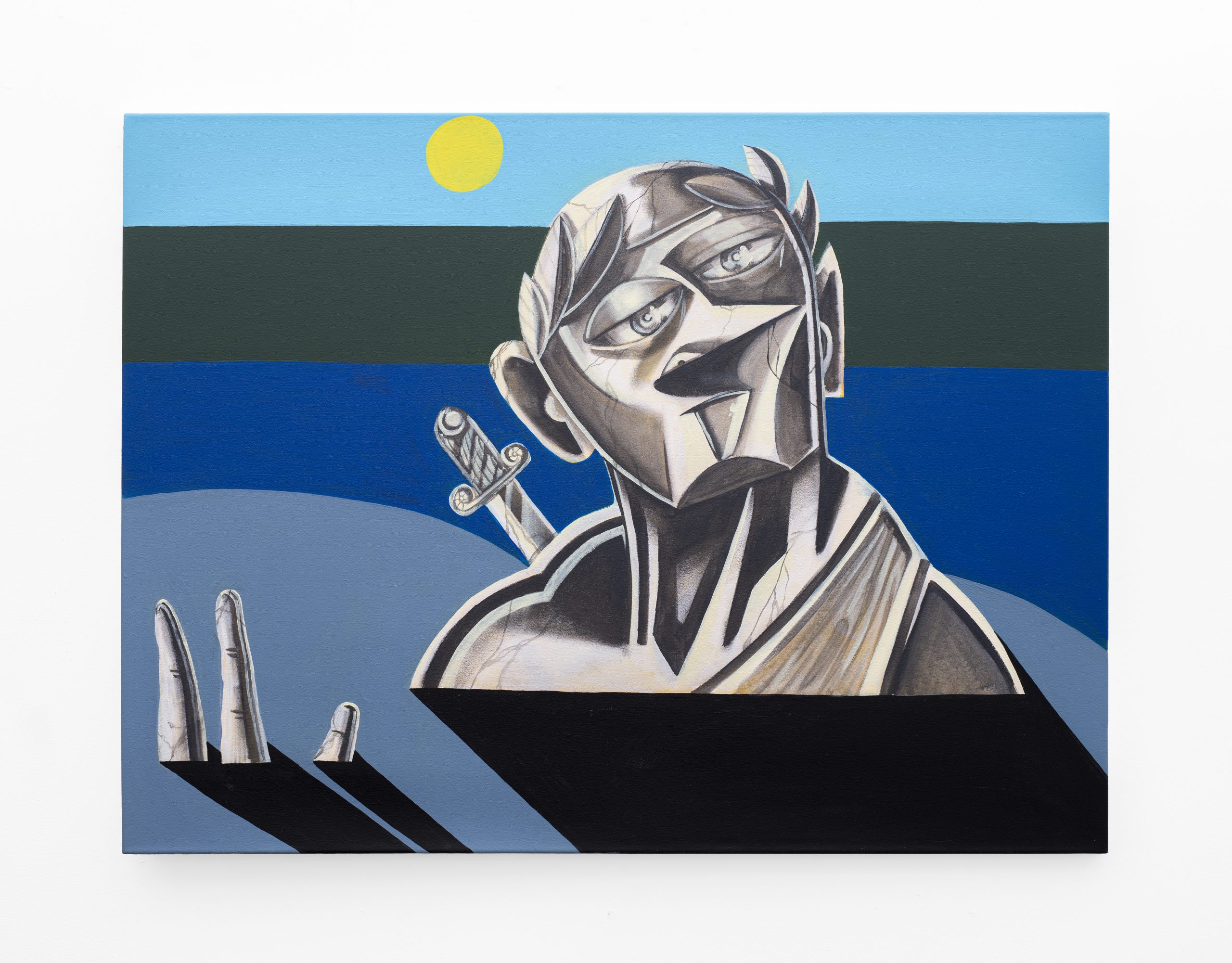 A Percy Shelly Poem For Rome, acrylic on canvas; 2021.

The exhibition, which opened at SMAC Gallery as part of their Artist Room program, is described by the artist as “depicting Durban in HDR”. In the close-up cropped work, UP YOURS, a character kitted in a red adidas tracksuit and cap, cigarette lodged in their mouth, sticks up two cheeky fingers. They are hanging out from a car’s window while driving alongside a promenade (I imagine). They look effortlessly cool: composed, aloof, and unfriendly. This “coolness” is suggested throughout Grecia’s practice, with just one example being the dating of his works as 2030 or 20201, an inside joke that has now become an iconographic staple. If “cool” is to be entirely stylistic, something immediately identifiable but never defined, then Grecia’s commitment to the post-depression boom aesthetics of Art Deco and Cubism is both an embrace and critique of cool. Considered in time, “coolness” — once perceived as a dismissal for past, present, and future — is now one’s attentiveness to consider their position and stake in all: socially, culturally, environmentally, economically. 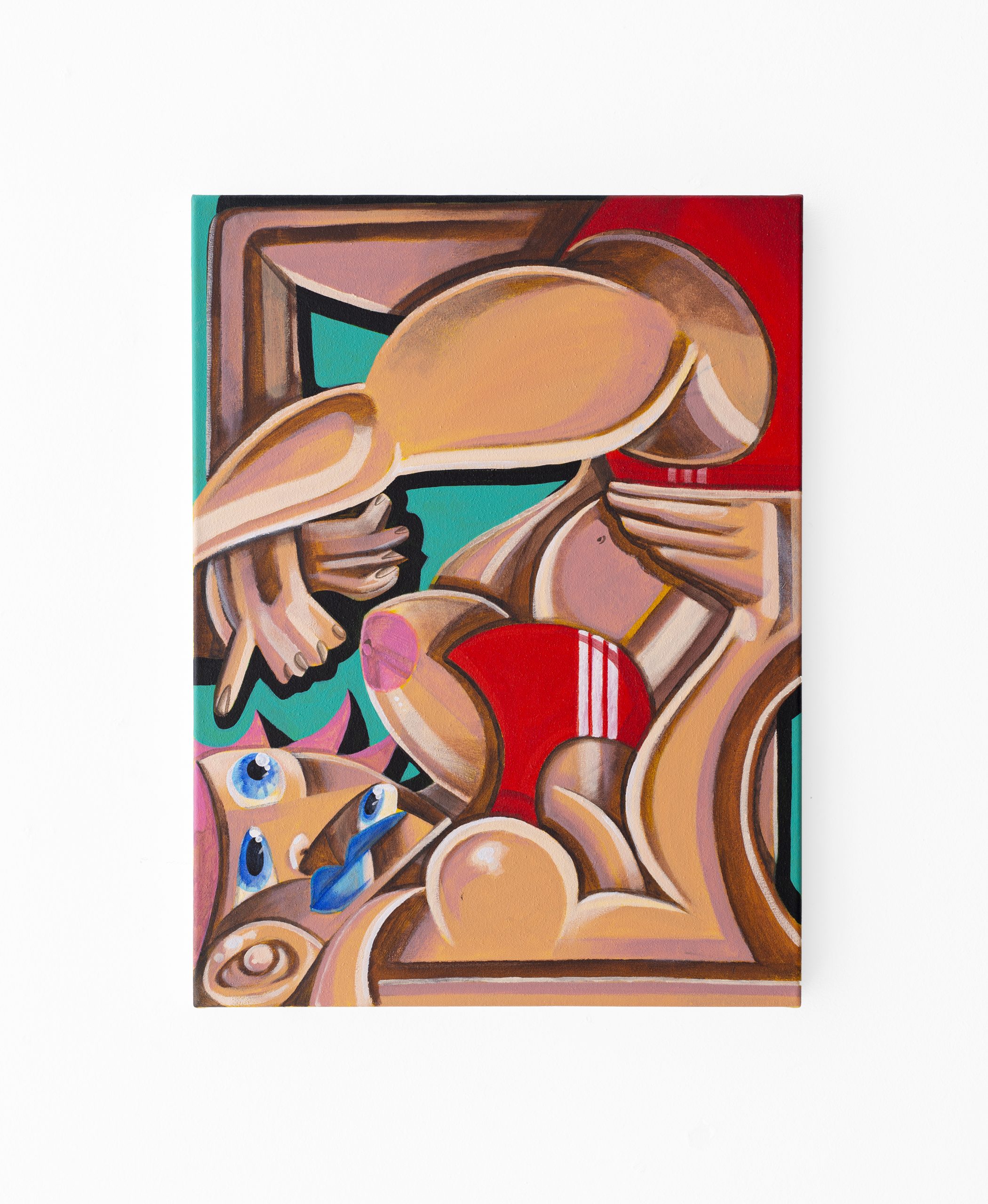 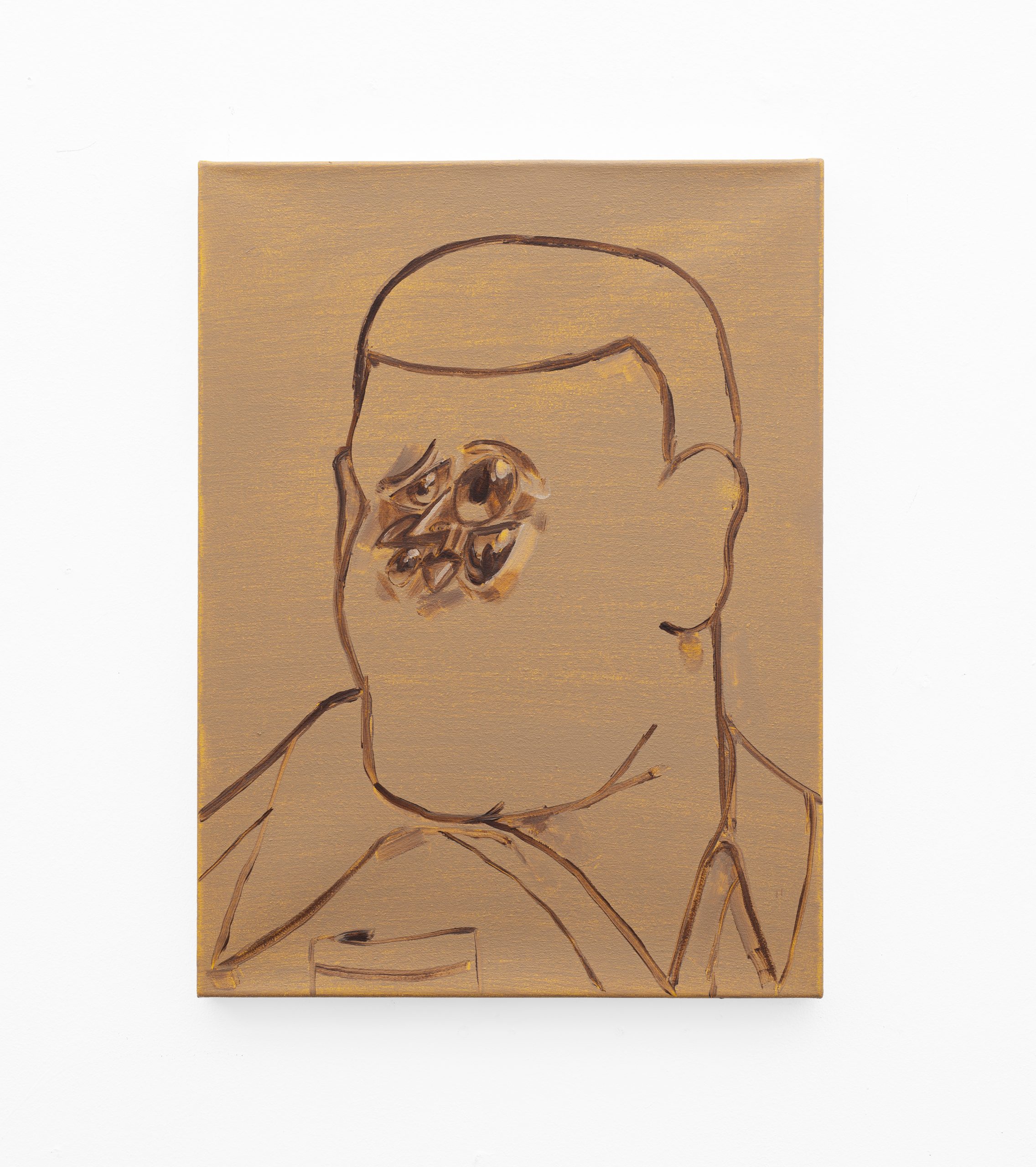 Grecia’s investment is revealed in his pastiche of history: from Tamara de Lempicka’s Art Deco painting and 80s Retro surf graphics to Classical sculpture, as seen in A Percy Shelley Poem for Rome. In this work, he imitates Greco-Roman statues in a style vis-a-vis early 2000’s MTV Base or Cartoon Network. In a postmodern fashion of satirically genius mash-ups, Grecia highlights both the banality and excitement of style and, therefore, of being. Peachy pinks and yellows cast through a white wash to reveal the flesh beneath the statue. This is a reference to the mythology of whiteness within classics, based on assumptions about race and aesthetics. Popularly symbolised as pure white, these marble statues were in fact brilliantly pigmented. Grecia’s use of white makes reference to both ‘good’ (read: Western) painting — where Titanium white should never be applied straight out of the tube and unmixed — as well as to his disillusionment with whiteness and its role within the canon of art history.

Although painted in acrylic on canvas, these works read as posters or comic strips. Because of this familiarity, one is able to relate to the works with more immediacy. However, there is a discomfort in that, as paintings, they are suspiciously well-rendered. They are fluent rather than fluid and seem almost computer-generated. Were you to touch them, they might feel smooth and cold like chrome. In this, there is both failure in and opportunity for contemporary painting (and, yes, these are synonymous). Displayed in SMAC’s slick, white, air-conditioned interior the works appear airbrushed. And yet, the loudness of Grecia’s populist presence makes the gallery’s textured concrete floor resemble the interlocking PVC tiles of a mechanic’s garage. The space informs the reading of these works and vice versa: they are in conversation. There is an honesty and grittiness in Grecia’s works — even in their squeaky clean plasticity, there is no sterility and no bullshit. Such is the case in STATUESQUE, where colours become muddy, paint bubbles and neon orange bleeds through brown to reveal truth.

This is the crux of Grecia’s practice. He grapples with painting as a medium penetrated by academia and aesthetics. In WORKOUT, he plays with space and perspective by compressing an entire form into the picture frame. The subject’s cramped existence in a yoga pose overwrites any potential for soothing — perhaps a nod to the over-saturation of the techno-age and our disenchantment with reality. In retaliation, the work becomes merely a mangled composition of geometric shapes. It is chaotic, flat, and most importantly, imagined. Grecia, like Michelangelo, pushes the anatomy of the body to its extreme; every muscle is accounted for if not fabricated. In BLUE EYES WHITE DRAGON, the eyebrows are removed as features of the face exist as forms or objects. A shadow lingers beneath them as they levitate — almost like a cursor — and below, the ignited end of a cigarette casts a red shadow rather than a glow over the hair of its smoker. Grecia welcomes these mistakes in perspective. By using blind contour drawings as the base for his paintings, he relies on slippages and surprise as an opportunity for escape from the linearity of painting and the physicality of existence. 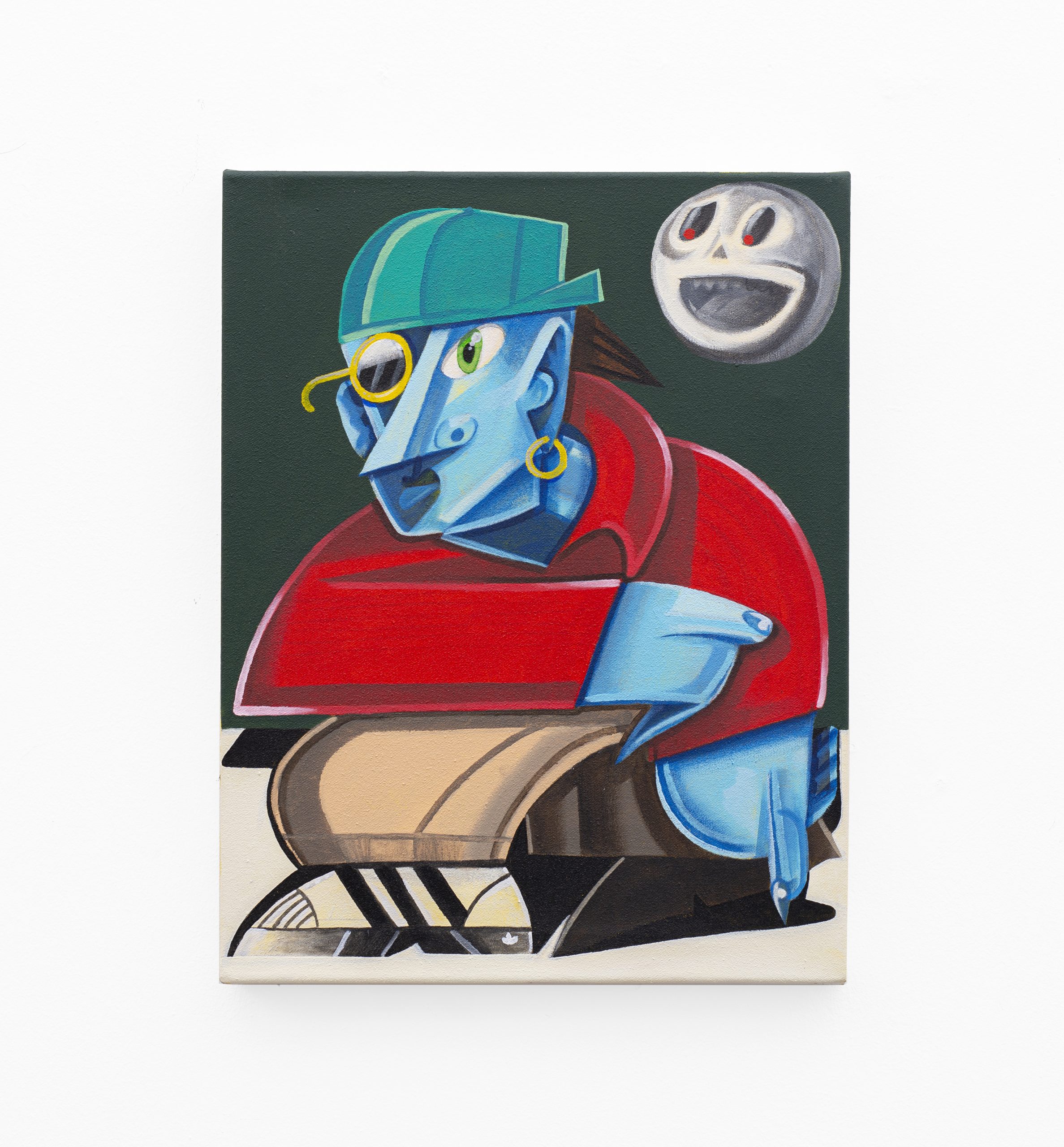 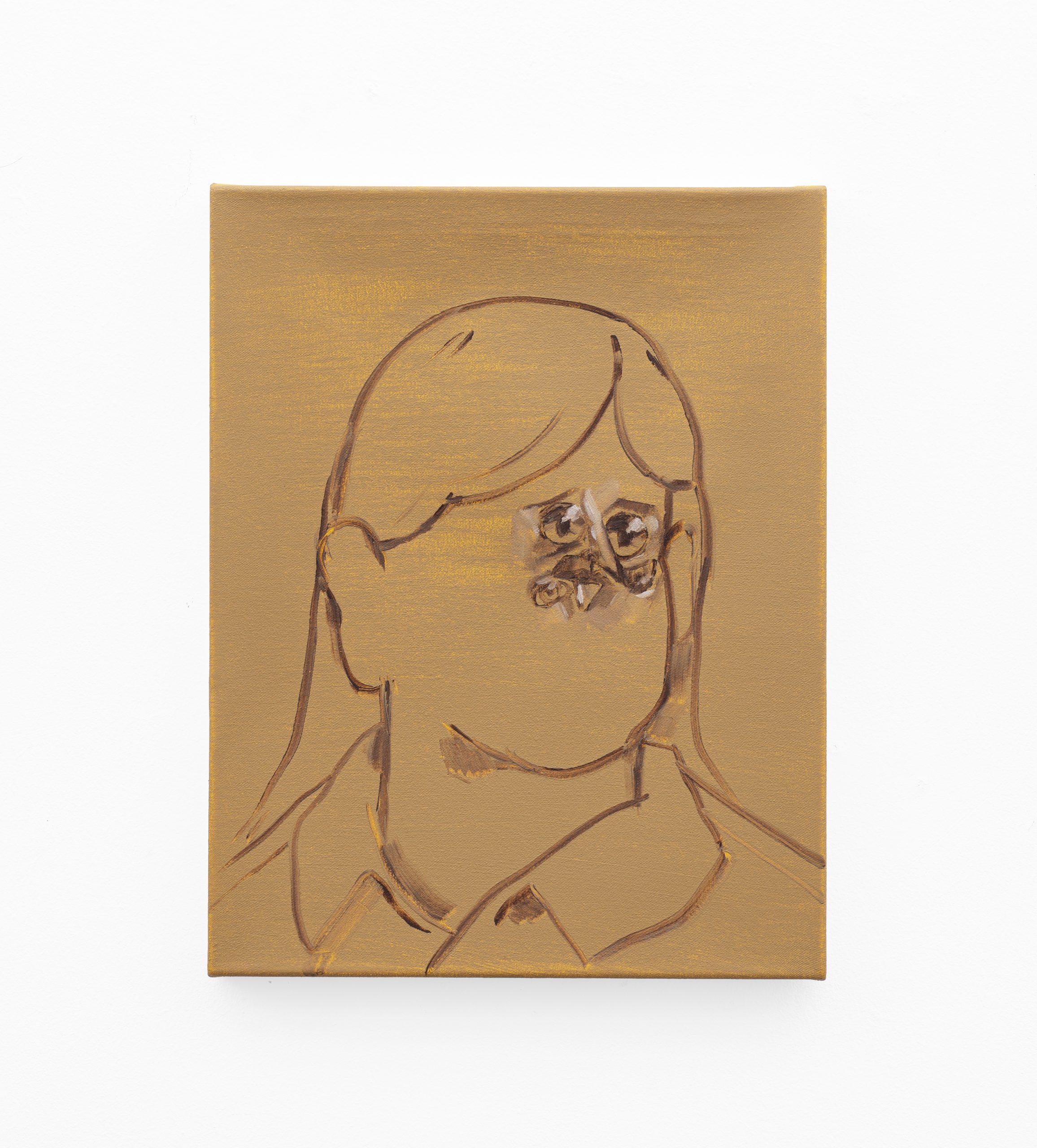 This can be further seen in MYOPIC and MICROSCOPIC, two rudimental paint sketches on canvas finished to look as if painted onto Belgian linen; an expensive natural substrate often hailed as superior within the canon. These sister portraits illustrate groupings of scattered and frantic eyes — their only figuration. The titles refer to short-sightedness and things unseen by the naked eye. Grecia equates this inability to see with the conscious choice not to question and critique. MYOPIC and MICROSCOPIC’s stylistic difference from the rest of the works, highlights Grecia’s depiction of eyes throughout the show. The eyes of these two uncanny figures — like those portrayed in A Percy Shelley Poem for Rome — appear glazed, as if holding back tears. Their emotionality re-affirms their humanness. Expanding from Grecia’s decree that ‘reality’ is imagined, he gives the non-human the ability to express. In Kali, a blue genie-like figure wears a golden monocle and next to him, a jolly-jammer resembling moon face (that also bears a similarity to Georges Méliès’s A Trip to the Moon) looks on with red eyes: deranged and excitable. And in TRANSFORM, a sickle moon’s eyes widen as if perturbed by their simulation into this space.

Grecia gives character to the inhuman as a means of world-building, a practice incited by a growing feeling of alienation from his surroundings. Due to the psychological implications of our techno age, the psychical environment can often feel overwhelmingly uninhabitable: a virtual dream rather than reality. The ‘real’ becomes less relatable than the internet. Grecia tries to reinsert this sense of reality, or tangibility, by using a digital style to bridge these two dimensions. Just in viewing these works — first digitally and then physically — I can reminisce about The Godfather, ‘No Smoking’ signs, modified BMW E36s, The Mask, Sin City, Picasso, Disney’s Hercules, lip-filler joggers of Sea Point, the Kardashians, Fresh Prince of Bel Air, Space Jam, Dragon Ball Z and manga. Grecia welcomes the viewer to collect their own references from Laps Around the Sun, using the reliability of a 2D, digitised form to depict an urban dystopia. 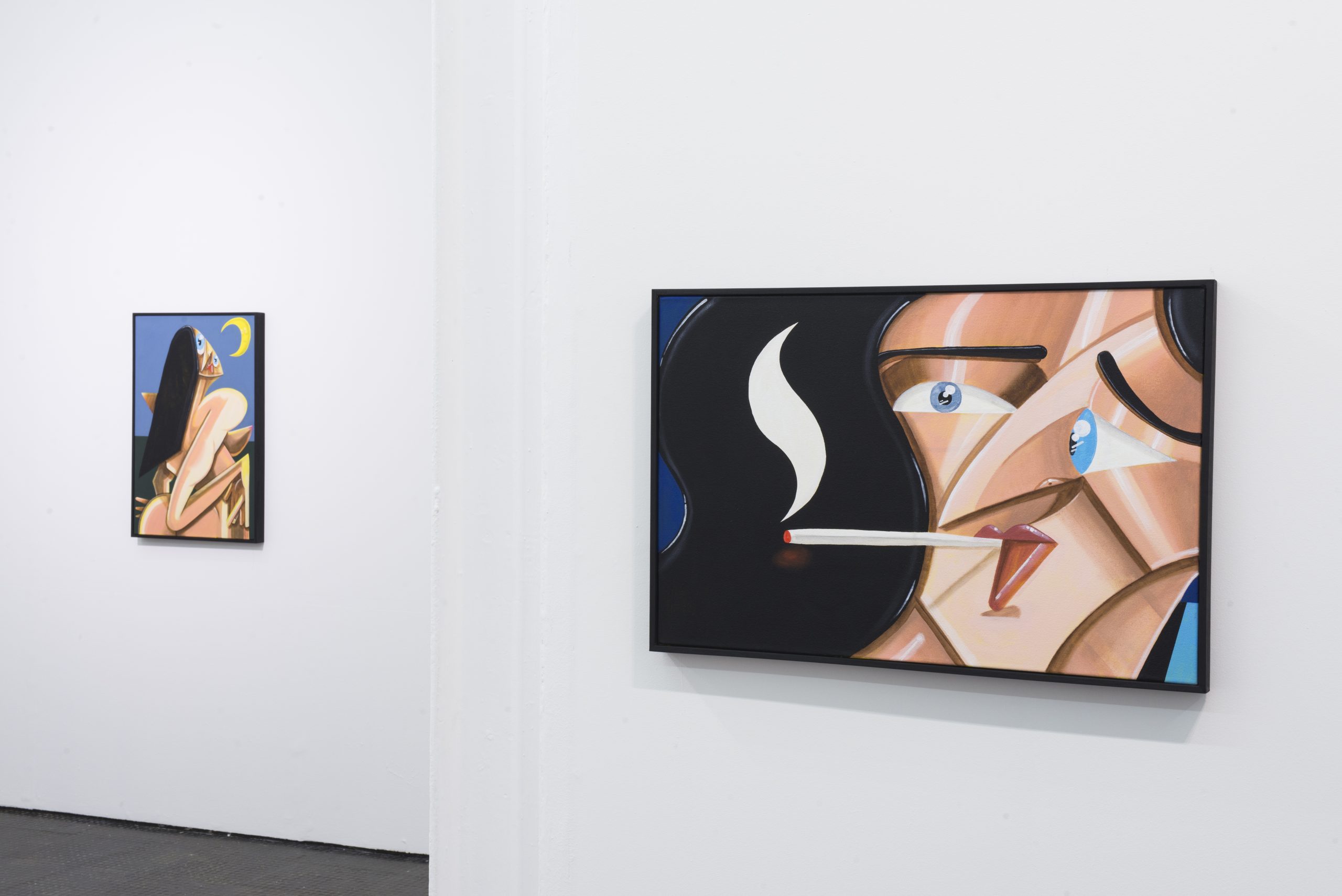 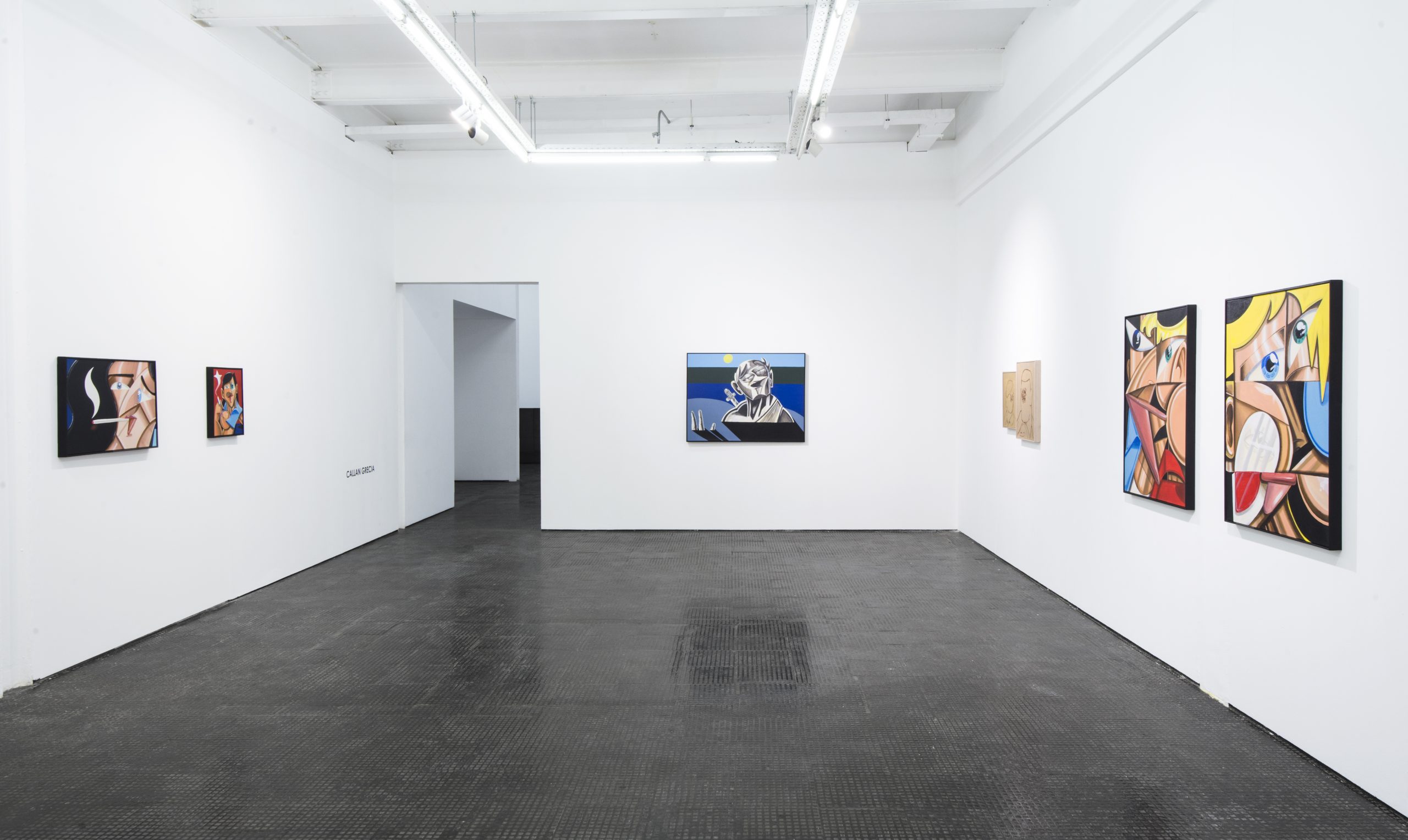