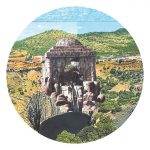 I’ve got a weird thing for cats who release experimental shit. I mean, you know not everyone is gonna dig what you do, but that’s kinda the point. Granted, most of the time I’m like, “Wow, this is god awful,” but there are some gems. Banana Brains’ Home Boy is one of those gems. What sort of gem? I don’t know, I only really know Amethyst because it’s my birthstone, but I feel like Banana Brains may be the type of dude who knows a thing or two about gems and crystals.

That’s wildly presumptuous of me, I know. And I’m probably completely wrong, I mean the dude has his lyrics up on Genius already, which a surprisingly few amount of South African musicians do. So maybe he knows a thing or two about making the meaning of his music accessible… and gems and crystals? I don’t know man. I know for a fact that Banana Brains knows how to use a loop pedal. The whole album is driven by it. It’s overdubbed fucked which makes it sound like it was made in the bath. That’s probably also because he recorded it alone in his living room, which adds a lo-fi charm to it all. This is the first time Mr. Brains has laid down vocals on his music, which may be why he chooses to wash them out with overdubbing. I have a feeling he may not be all that confident about them, but he makes it work for this EP.

Home Boy is “loosely written from the perspective of a disillusioned tourist who grows weary of the outdoors”, and lyrically it comes across as someone slowly having a breakdown. Sonically too, at times. The repetition of all the looping can extend to slightly uncomfortable lengths at times, especially on Lady Gogo II – although that song has so many jarring elements and I think it’s meant to test the limits of what’s comfortable.

That’s not to say Home Boy isn’t pleasant listening because, for the most part, it is. It’s methodical and moody. The soothing riffs and tender, somber vocals compliment each other well. In his own words “the music on the new EP takes its cue from the bouncy bass lines of South African mbaqanga and the interlocking guitars of Zimbabwean sungura bands, and buries these influences amongst marching Casiotone beats, murky noise pop noodling, and wiry wah-wah freakouts.”

According to his press release, Banana Brains wants to get out the house and play more gigs. So if anyone reading this books gigs, make that happen because I think you’ll be pleasantly surprised. The dude has been busy and puts out some interesting work – just check out his Bandcamp  for proof. It would be cool to see him be rewarded for his unique work with some paid gigs. The rest of you can support him by giving his album a listen below. If you dig it, buy it.