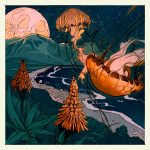 Would you like to be somewhere else right now?

Well, lucky for you, I’ve found a teleportation device of sorts. While your physical surroundings might stay the same, put Bottils’ End of the Continent – Part One EP in your ears and you’ll be magically transported somewhere deep inside of yourself. Scenes play out in your own mind while Bottils’ music serves as the soundtrack to unwritten stories, or as he puts it, “It is a soundtrack to a landscape that doesn’t quite exist.” According to Bottils, “These five tracks are imaginings of spaces that are eerie, joyful and forlorn. It is inspired by the places, flora and fauna of the Western Cape, South Africa. Consisting of field recordings, piano, synthesizers, samples and one electric guitar, it attempts to create a sense of deep time and feeling lost in nature.” Each track has a unique story behind it and taps into different moods, spaces, and periods of time that will resonate with each of us differently.

Bottils started making “Large Magellanic Cloud”, the opening song, in December 2018 after taking a road trip to the Tankwa Karoo desert and visiting the South African Astronomical Observatory in Sutherland. Listening to it, for me, feels like making it through an especially long night and watching the stars fade into the sunrise with hope in your heart. After “Large Magellanic Cloud”, we are then transported to a moody underwater wonderland with “Jellyfish Bloom”. “This is like a soundtrack composition for me, for a jellyfish scene in a movie or game that doesn’t yet exist.” If they made a modern Ecco the Dolphin, I could imagine “Jellyfish Bloom” as the soundtrack guiding you through an underwater maze- the ominous piano flourishes signalling danger in this otherwise serene scene.

“A Circle of Kamassi Trees” was created out of field recordings from the Afromontane forest in the Western Cape originally for The Dark Outside, a pop-up UK radio station playing obscure new music in a remote forest for 24 hours once a year. Close your eyes when you listen to this and it’s hard not to imagine yourself surrounded by trees blocking out the sun, with bird and wildlife bustling around you. With “As If it was Happening for the First Time” Bottils “set out to make something bleak that someone could listen to while reading”. Weirdly, I didn’t find this to be bleak at all, but gently and subtly beautiful.

The closer, “January”, is the only song with vocals which come as a welcome surprise touch to cap it all off. “I suppose it’s about feeling lost, not being able to recognise yourself anymore and hoping it will all end in a nice way.” It’s all too relatable especially after the hectic period of December, however, it translates and the EP ends with hopeful uncertainty. End of the Continent – Part One is a gorgeous release that offers the listener many treasures to be dug up over time- both in the music and in themselves.

SIO's A Place to Run is Moody and Mystical