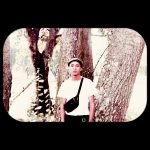 Espacio Dios doesn’t like to speak about his old music. That’s not because the music isn’t good or because people didn’t like it, he just isn’t the same person anymore. Artists like Lauryn Hill and Erykah Badu, for different reasons, have been chained to work they made in their 20s, and have to get on stage decades later, performing to a public imagination that hasn’t expanded to allow them to grow. That’s not a path Espacio is interested in following. “I don’t like talk about my old music a lot,” he says, sighing. “I just feel like I’ve changed a lot since then, and if you don’t change…you don’t grow.”

Espacio, born Masego Makganyoha, has been using music to express his growth and change since he was a kid. Growing up in Mafikeng, he had a big ear and listened to a range of things from Timbaland and Chris Brown to Nina Simone, EDM and almost anything else he could find. It was Mafikeng that he went back to- to create his latest E.P ‘Percussive Planet’. The projects predecessor ‘Backseat Galaxy’, was a way to, as he puts it: “put everything that affects me into the limelight.” A year passed between the two projects. In the interim, Espacio took time to process what was happening around him and just be. “A bit of everyone around me is in the music” he explains. “I felt like I had to put the experiences I was having into [it].”

Over a period of two months in Mafikeng, Espacio put together ‘Percussive Planet’. It’s 9 tracks and 29 minutes long. Each song sounds distinctly unlike the next, which is impressive in a musical landscape in which almost everything popular sounds easily interchangeable. Apple Music has the genre of the EP listed as “World”, which is pretty much the catchall phrase for anything that isn’t European or American. Everyone from Burna Boy to Fela Kuti to Sean Paul has had their music placed under that title. Percussive Planet is rooted in Africa, but it’s worldly in ways that streaming platforms aren’t thinking about.

Espacio explores a range of themes and genres on the project in a manner that feels rooted in South Africa, even when he draws on elements that aren’t from here. Love, heartbreak, ego and nostalgia all find their place on this EP. The project is a full experience. For Espacio, creating that kind of music is about creating something spiritual. “Music can control a human being,” he says. “It’s like a science that you can’t understand, and so we say its magic.” He sighs, trying to figure out the words. “It’s trippy”.

Espacio’s music feels simultaneously spiritual and trippy but still rooted in real life experiences. On “Pussy Willow” he sings “I hope you find what you’ve been searching for all this time” to someone distant, on a beat that feels spacey and brought down to earth on the percussion. Just like the title suggests. Later on “Mamela”, Dios asks us all to listen. “She won’t ever love again. Told you’re your friends you’re my one. She said I’m broken. I can’t feel I’m too numb” he sings. Drastically different from every track, “Uri Fire” is a hype anthem, an ode to himself in classic hip-hop fashion.

Espacio has been busy since ‘Percussive Planet’ dropped, and the hype around him has been busy too. A quick search of his name on twitter reveals a plethora of “Percussive Planet is so good” and “Espacio Dios did not come to play with you n*ggas”. “Uri Fire” was used in an episode of Queen of the South. He’s been working on visual projects and his next musical drop. He’s still working on music with his frequent collaborator (and close friend) Shaka Shoelu. Of Shaka, he says “working with him is amazing. It’s a different type of chemistry when you work with someone, and there’s already a bond there.” On top of all that, he recently just dropped “Limitless” a song with Australian producer Kilter. The song is two years old and has just been given new life through the collaboration between the two musicians who have only ever met in the digital realm.

When I asked Espacio what he’s learnt over these past few years, he pauses and laughs. “Kids, read your contracts” he giggles. He’s not wrong. “Other than that,” he continues, “meeting different people has been important for me.” We come back again to the topic of growth and change. For Espacio, the musical journey and the music itself is evolving and changing constantly. “My emotional experiences are not the same as when I was younger” he reflects.

Espacio is someone who doesn’t like to dwell on the past, nor does he like to live too far in the future. There are things in his career that he’s got planned, but to hear him tell it, he’s comfortable not making the mental jump to ten years down the road. He’s here in the present and his projects are reflecting that. “I’m just making music” he elaborates. “I’m in a mental state where I feel like I’m making good music.”

Everybody knows but nobody talks