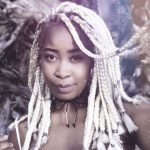 “‘Dude, this is what you want to do with your life, you need to get the ball rolling!’ and literally within a month I recorded and released my first song” explains Naye Ayla of her decision to focus on music at the age of 18, although the Joburg based singer and songwriter has always been attracted to music and performance. “Since before primary school I used to sing in church, I’d go with my grandmother and I’d always be the lead singer in the children’s choir.”

Although she has fond memories of her mother playing the likes of Sade, there was never a strong musical influence in her life. “The music thing was something that was my own”. Writing her first song in Grade 1, it developed into a favourite creative outlet of hers. “Writing’s just always been my thing. Writing poems, writing short stories, writing plays, things like that.“

Having released two EPs thus far, the most recent being Exi(s)t which featured YoungstaCPT as well as her Culture Cartel band mate, Una Rams, she is currently working on her follow up EP, although a single in collaboration with Langa Mavuso and Una Rams is to be released soon. “The cool thing about the song is that it has all three of our vibes. That’s another thing I want to do in music, I don’t want to become a different person, because I’m doing another person’s vibe. But we can create a song that gives people three different feelings, that puts people in three different spaces and to me that was the most exciting part.”

In comparison to Exi(s)t she feels her upcoming release is a lot lighter. “I feel like my transition into music made me go through a lot of things in my own mind that made me see things in a darker perspective, not like emo, just very honest and very raw. Now I’m in a lighter place, I’m in a more celebratory place and even the introspection isn’t very dark. So I think it’s a lot more relatable and it’s a bit more fun.”

Apart from the upcoming EP, Naye’s current projects include a video for last year’s single ‘Waves’ and a residency at Hard Rock Cafe Sandton starting in mid-March, and a performance at the We Are One festival, something she wants to do more of. “I want to be on world stages, like festivals. I really enjoy the festival feel. Oppikoppi, Rocking the Daisies, Coachella, Lollapalooza, Red Bull Stages, that kind of vibe. I really like things that make you share spaces with artists that are completely different from you.”

When it comes to her music, Naye Ayla hopes that she can connect with her listeners and help them articulate things they otherwise couldn’t. “I’ve always said that people don’t have to understand what I’m saying but if it evokes some kind of feeling, that’s all I want. I wanna speak for people who don’t know how to put their thoughts together. I’ve listened to so much music where I’m just like ‘aw that’s exactly what I wanted to say that’s what I’ve been trying to say my whole life’ and I couldn’t get it together and someone else did. I want to be able to do that, even if it’s just one person. Then my job is done.”

Naye Ayla's "Mercury" will have an Effect on your Emotions