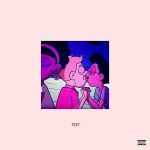 Johannesburg-born and raised fashion designer and musician Siyabonga Ntini, also known as rxlfe, started his creative journey at a young age, with an early memory of his being one of him drawing clothing in preschool. “It’s not something that I particularly remember but there’s a photograph of me drawing what looks like clothing but it’s not very clear. In my mind, that’s where it started. It’s been a thing that I’ve been doing almost my whole life.”

At the same time, music has also been a lifelong obsession, although rxlfe’s focus was initially on listening rather than creating. Having started writing poetry during high school, it was during his time as a student in Durban that he decided to dive into music and create the sounds he’d always wanted to make.

Influenced and inspired by the sounds that surrounded him growing up, especially the soulful Sundays that featured a lot of late 90s and early 2000s RnB, rxlfe’s draws from the likes of FKA Twigs, The Neighborhood, Brandy and Jamelia. Writing and producing the music himself, rxlfe says he does so out of necessity. “I make everything. It’s tricky as someone who has just started creating music. I don’t have a lot of music making friends. I haven’t experienced a lot of people that are into similar things that I’m into in terms of music. So I find it’s always easier to learn to do something by myself so that I can eventually get them down to a physical force.”

rxlfe’s latest release, “Text”, a mixtape released in 2018, is a prelude to his upcoming album. “The music on ‘Text’ is music that I felt wasn’t good enough for a complete album but music that I was happy about, that made me feel a certain way, music that I felt expressed a lot of the things I would like to express. I released it as a form of introducing my sound to people that are not aware of what’s going on.” Expanding on the concept of the release rxlfe says that it deals with the nuances and complexities of dating as a gay, black man. “Many people don’t realise how tricky it actually is, manoeuvring around within the gay spectrum of dating. I felt I needed to put that down in a cute little package so that I can express my experiences with dating as a gay and queer South African.”

As an RnB artist, rxlfe is hoping to show that different forms of love exist outside of the established heteronormative narrative of love that most RnB artists espouse. “I want people to take that there are different forms of love that exist within music. Generally within life. I find with RnB music it mostly comes from one side. The straight person’s point of view. How love happens and how love works. Even when it is expressed by someone who is queer, it morphs into something they didn’t intend to reach more sales or a target audience. I’m more interested in them realising that there is a different kind of love that exists and it is also pure and it has its own trials and there’s a whole journey that’s within it that isn’t similar to the shared narrative of how love goes.”

Ntu explores the boundaries of RnB on 'Perfect Blue'

A culture that is rich and vibrant but one also drenched in humility. All our intricacies — everything we have endured and are still are en...

Lazi Mathebula, crafts hand embroidered sneaker-inspired rugs with his latest offering that considers the worlds and proclivities of both sn...

“Start where you are. Use what you have. Do what you can.” Arthur Ashe A perfect representation of the above mentioned quote is Gabriel Meh...

“The quality of being is what soul is, or what a soul is. What is the quality of your being?” This is the question Amiri Baraka puts before...