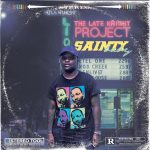 Sainty Baby is one of the most AMPED people I have ever met. She’s a diminutive ball of energy, and comes across as a soft and genuine person. Her positivity and belief in herself is infectious. With her upcoming EP dropping on the 13th of July, I figured it would be a good time to really get to know the house DJ and rapper who has had quite the life so far.

Originally from Pietermaritzburg, Sainty Baby is 1 of 3 children which is why she was named Nthathu, which means ‘Three’ in Xhosa. She’s open when I ask about growing up and tells me, “I don’t remember much, honestly, or maybe I’m becoming good at covering things up, especially if they involve hurt and pain.” I relate to her on that. Most of my childhood is in deep recesses I don’t want to delve into either. “I was bullied in primary school,” she explains, “‘til I told my older sister about the culprits. I don’t know why it took me 2 years to tell [her], but boy, did she save my gay ass! Sorry can I say that? Real talk, I can never understand people who are actively mean for no reason.”

Her complicated relationship with her father is one of the motivations behind her work. But music wasn’t the original dream. “I remember exactly what I wanted to be when I grew up – a cop. I always imagined one of those shootouts where the cops hide behind a car, pop up carefully and fire at perpetrators, like in the movies, and guess what? I sort of did it! I say sort of because the only time I shot a gun was at Traffic Training College and during the annual Station Shoot.” Not exactly what I was expecting to hear. Personally, watching those movies, I always imagined being the bad guys and anti-heroes, but haven’t pursued the fantasy too much IRL. Sainty Baby became a cop for 5 years. “From 2009 to 2014, I was a cop by day and DJ by night. Provincial Inspector for the Road Traffic Inspectorate to be specific. Yawned out after 5 years.” Before that, it was working at McD’s on weekends and school holidays from Grade 11.

Sainty Baby got into rapping back in 2007 thanks to a MXit rip-off and wanting to fit in. “There was a chatting app called Mig33. One particular group that intrigued me was the Rap Battle group. I decided I HAD to learn how to battle so I could hang people out in public. I know that’s terrible inspiration but in the beginning that’s what I desired.” She’s so self-aware and open, it’s disarming yet comforting. “I had a rapper friend/producer called KayDee so I asked him and he was more than willing to help. Immediately, I picked up that my word play was pretty sick.” She also has a fair bit of self-confidence.

“I moved to Durban in 2009. In 2013 I met an artist/producer named Gavin from Sydenham. He actually gave me a Hip-Hop hit which I never released. When it came to practicality, as a new artist I had to choose an art to finesse.” Sainty came to a crossroads in her musical journey. She had been rapping and DJing for years, and had to figure out which to pursue further – “I had to choose between rap and house.” She choose house. Her thinking was, “Once I got GOOD at DJing, then I could look into learning more and incorporating that into my music, which got me looking into production. I quit my job in November 2014 and the following year I used the money from my old job to pay for my Soul Candi Institute of Music fees. That’s when life became interesting – I could make my own music from scratch!”

Recently though, she found herself called back to rap. “Last winter, I was in my brother’s studio. He handed me his phone and asked me to try and do the last verse he had written. I did it. It felt good until the other rappers started complimenting my verse.” Usually most people are stoked to get compliments but Sainty Baby wasn’t satisfied with her brothers words in her mouth. “At first, I wanted to write my own raps so I could get compliments for my own rhymes, but a year later I feel like lyrics descend upon me during my quiet moments, like a gift from a higher power. Or maybe I’ve practiced enough to confidently say that this is my best medium of expressing myself. I don’t know how I’d speak about getting shot in the face over a house beat.” Being a house DJ just didn’t fit the vision Sainty had in her dreams. “I’ve always had a picture of a fierce lesbian rapper who’d drive the country crazy with punch lines, word play and a bit of confusion. Girls like her. Guys like her. All the lesbians want to be her. I woke up one day and realized that star female rapper was me. My fellow citizens just don’t know yet. I’ve created a lot of audio letters and confessions and I’d just like every person to listen to it at least once.”

I asked her how she’s found the transition from behind the decks to in front of them. “Astonishing, exciting and a bit nerve-racking because it’s different to DJing. Now I have to stand in front of a crowd and convince them I’m worthy of their time and I CAN actually entertain. Meanwhile, I’m just trying to tell everyone how grateful I am to be alive still. I’m also very eager to release my audio confessions so I can finally move on from all the things I’ve been through. Everything is okay now.”

Sainty aims to be one of the 5 best female rappers in South Africa, so I asked her what she thinks it’ll take to get there. “Hits, sass. Honesty and playfulness. Dope visuals and a lot of well curated shows, preferably free shows. A bit of giving people what they want without losing your uniqueness in the process. International strides are a good way of boosting your fans’ confidence back home.” It seems like she has it pretty figured out, although time will tell if she can make such moves.

She’s got a unique vision and wants to offer people something different. I asked her what she’s offering that others aren’t and she burst forth with ideas. “I pray my competition doesn’t copy this but instead of traditional music videos I will put on live theatre shows, showcasing the music. The picture on my E.P. cover, picture that bed on a real stage and the opening act is me waking up from sweet slumber and bursting into song! I’m offering a new and evolving sound. Every beat is different from the next. I’m also bringing my birthright into play. Vernac! I don’t know a female rapper that spits in her own language, with the exception of Sho Madjozi. I’m going to give people Instagram captions in isiZulu and have them ask themselves HOW a girl is able to come up with such. It’s beautiful because I do everything on these songs. I sing, I rap and I switch between my two languages with the greatest of ease. Fun and Truth combo is an angle I’m going with. I’ll jokingly or sometimes straight up say something that most people already have on their mind.

‘Getting you outta rotation,

Why are you famous?

Alrighty that’s none of my business,

Why are you doing this Cyril?’

I didn’t mean to use his first name but it rhymes better. Anyway, I’ll use my sweet voice to carry messages across and once in a while, in between the lines, you’ll find something you also relate to.”

Sainty Baby’s debut EP drops on the 13th of July, you can hear her most recent singles below: