Reflecting on queer experiences through movement and imagery - Bubblegum Club

UK photographer Angela Dennis teamed up with dancer and choreographer Llewelyn Mnguni, the result of which is a series of images that aim to visually represent their lived understandings of gender and sexuality as a spectrum. Zoo Lake was their chosen location, attracted to the vibrant colours that were brought to the basketball courts near the lake by local artists.

Their collaboration became a moment of exchange and a moment of solidarity, sharing more than just the sound of the shutter and angelic poses. Angela and Llewelyn shared with one another their experiences as queer people of colour, coming from different sides of the world. This intimacy comes across in Llewelyn’s openness in the images, and Angela’s treatment of each image. 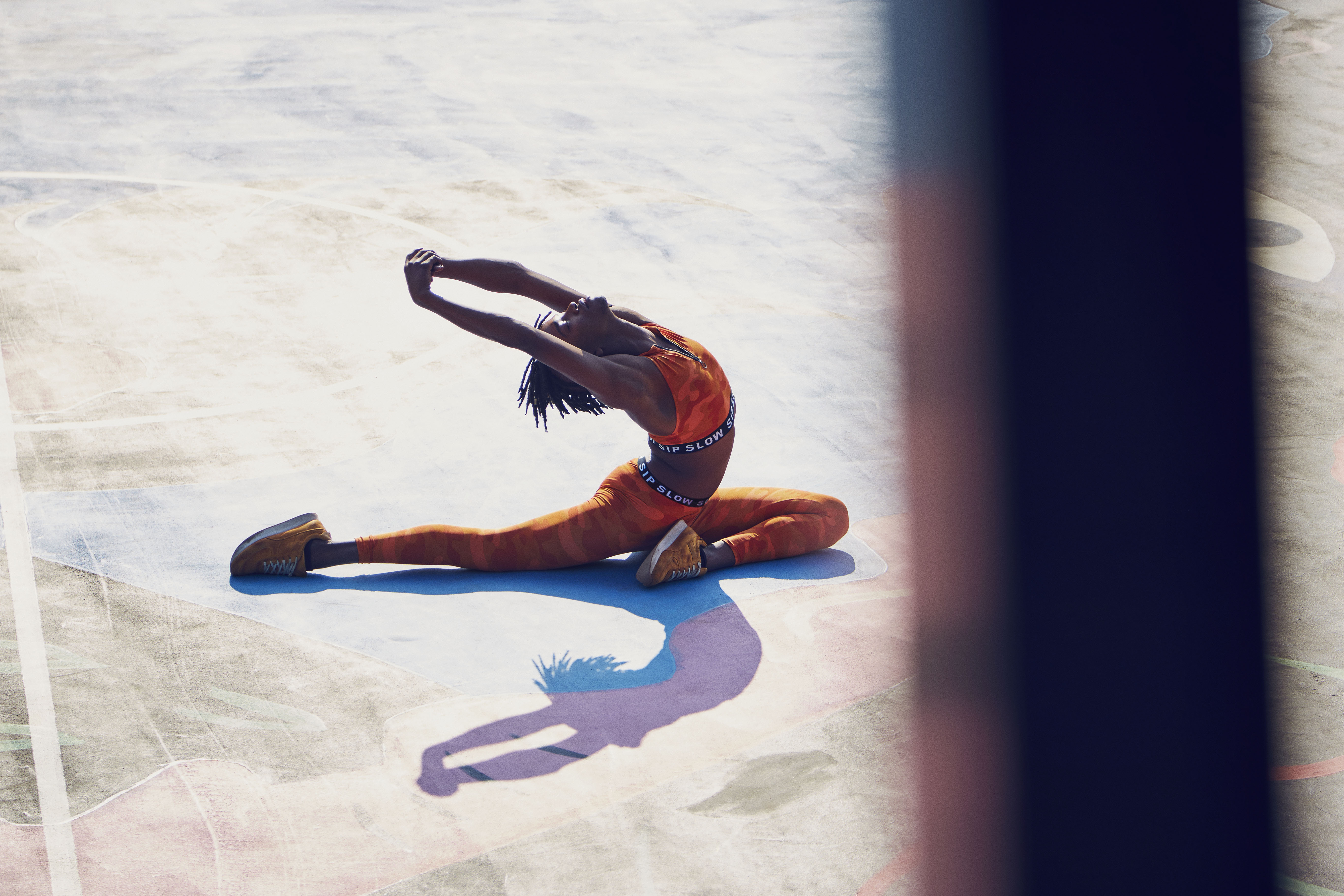 For Angela, photography offers an avenue for identity exploration, focusing particularly on the “black body, black aesthetics and queer identities – that of my own and those I encounter.” She does this by presenting the every day, the intimate, individual self-care practices, style, social groups and home life. “My general approach has been an attempt to subvert beauty standards in the west that favour whiteness by producing work that celebrates and beautifies black people, as well as work that looks for visual signifiers of common cultural practices,” Angela adds.

Angela’s interest in Johannesburg sparked from attending AFROPUNK in the city in December. Curious about the possibilities the festival offers for black transnational exchange, Angela met a number of creatives, including Llewelyn while staying in Johannesburg, and was keen to accelerate the momentum of creative engagement. 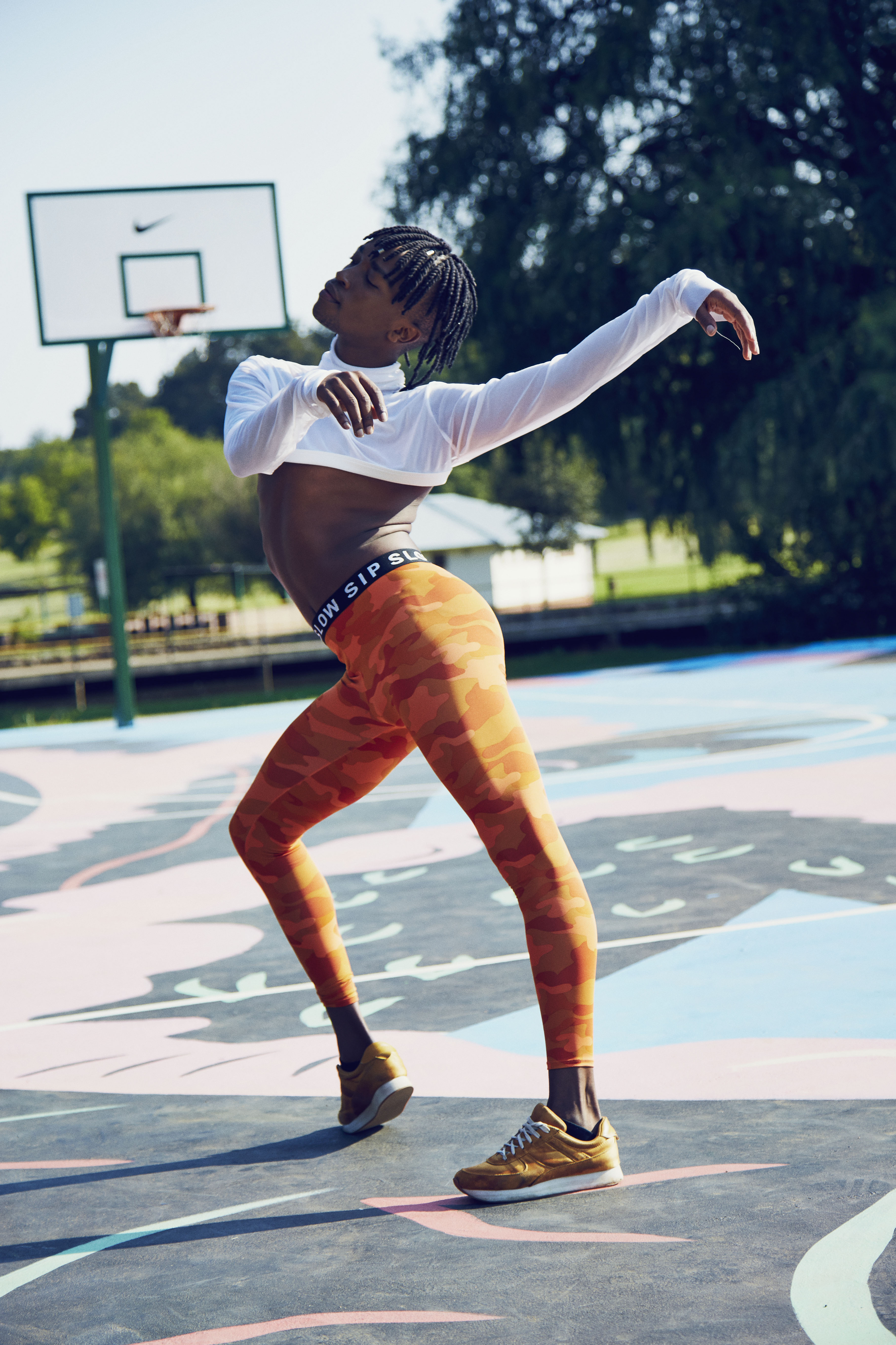 As a dancer and choreographer working for Dance Factory, Llewelyn uses this medium as a way to share the untold stories of the LGBTI+ community, “because I find that in dance there is a lack of representation for the stories and lives of this community.”

Reflecting on the series, Llewelyn states that, “As a black queer artist I think it is imperative to capture moments of one’s existence in the social climate we find ourselves in. Self representation, self love and pride are what these photos should inspire and evoke. It is also important to me to continue to document our lives as this inspires generations to come.” 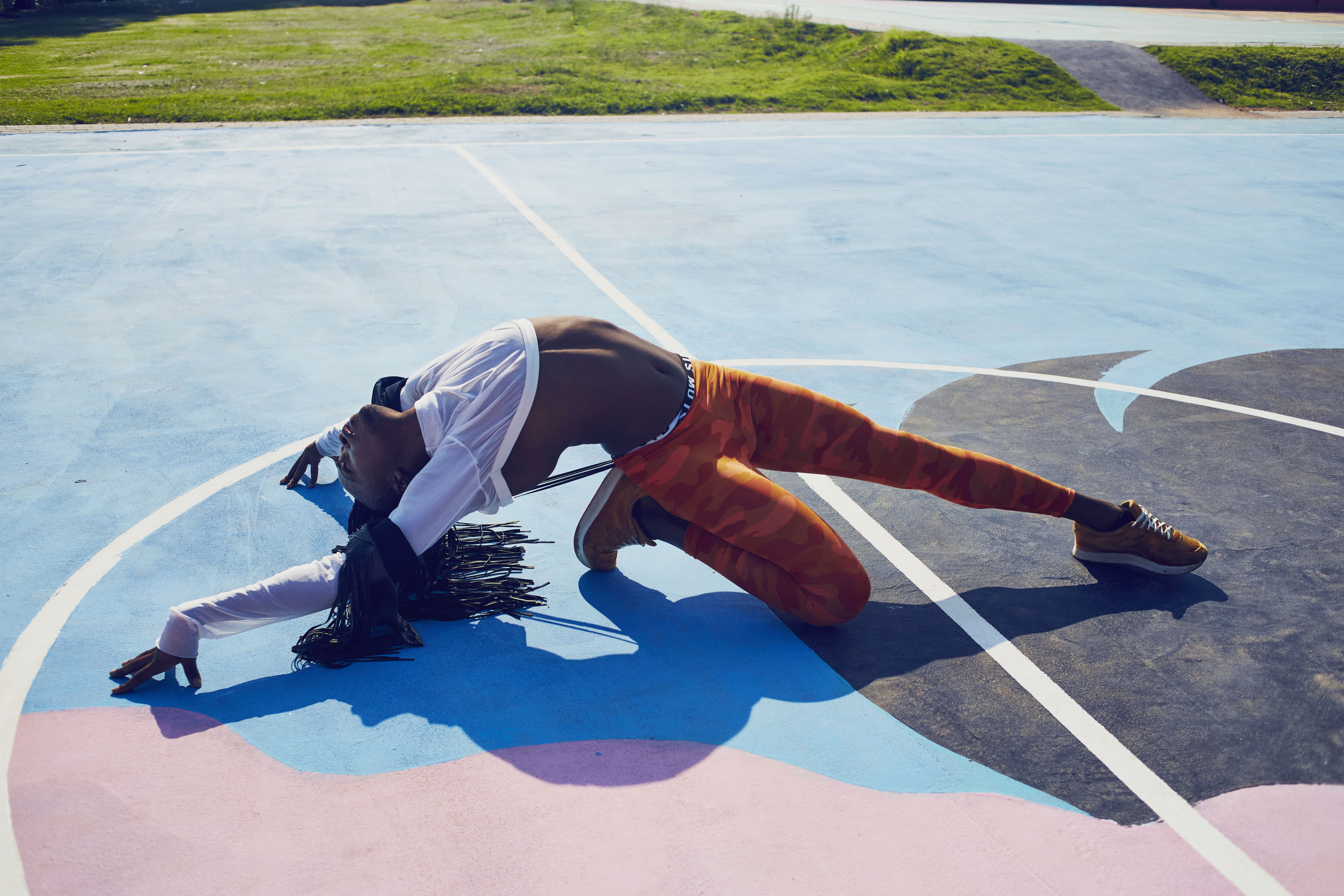 This process was not simply about Angela taking photographs of Llewelyn, but a partnership of making images, a kind of co-creation that mixed together their exploration of identity.

Continuing Llewelyn’s train of thought, Angela concluded by offering this reflection, “Being queer I am part of a community that resides in a liminal space on the margins of society, something Llewellyn and I can identify with. Our work here, in its various mediums seems to generally be about understanding the communal spaces we reside in and forging new connections. Blackness itself encompasses a multitude of experiences, politics and cultural production globally. And as we continue to rise and take up space, it is imperative that we keep fostering this learning and understanding, so that as authors we create ourselves from a position of strength. I think this translates in the images through the grace and strength of Llewelyn’s free movement, he literally uses his body to take up public space. The bold colours in the court flooring become abstract flashes of colour and light, nodding to the ‘colour’ of queerness. Transnational exchange means strengthened collective power and an infinite network of peers to learn from, to lift up and celebrate.” 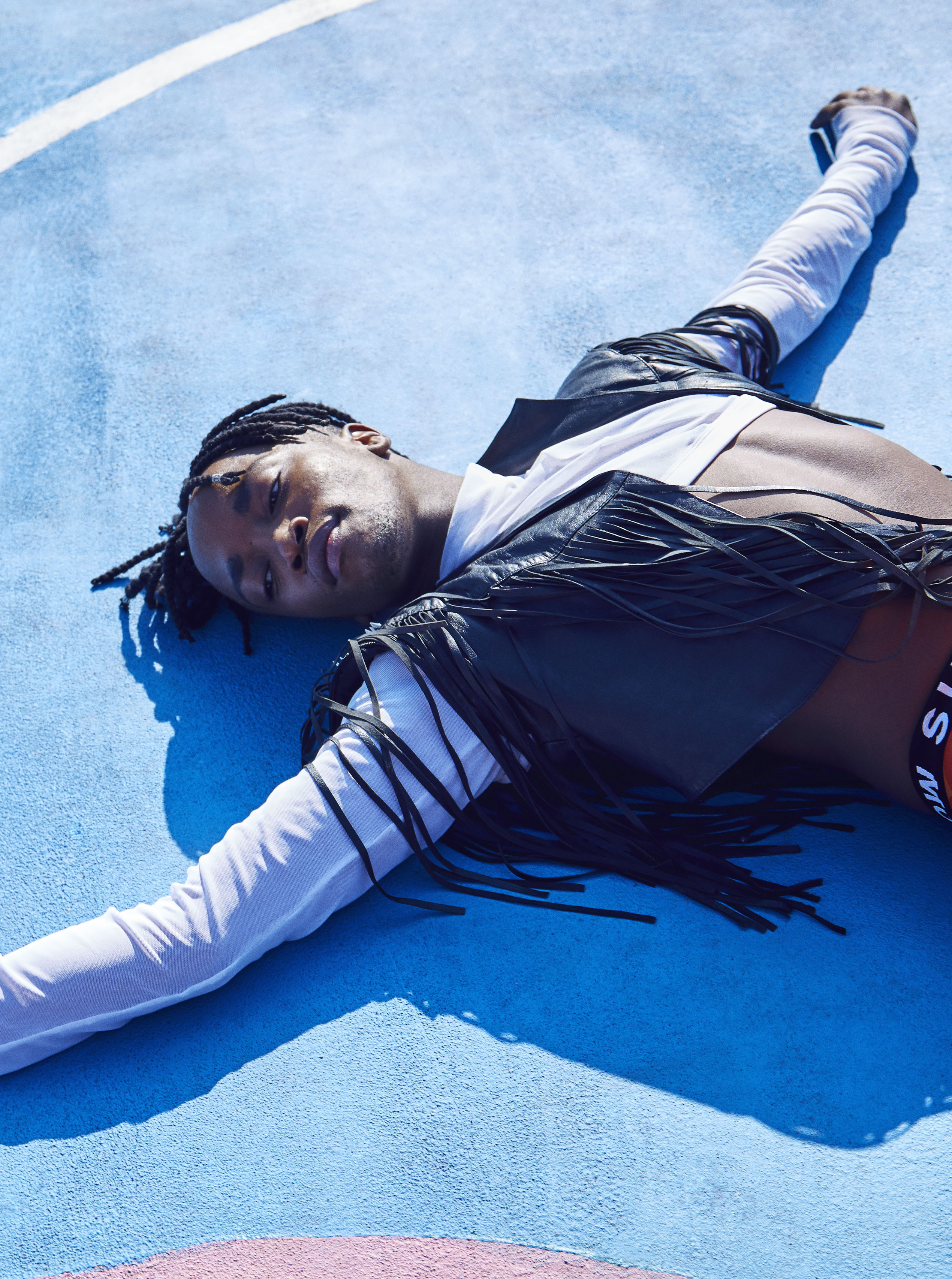 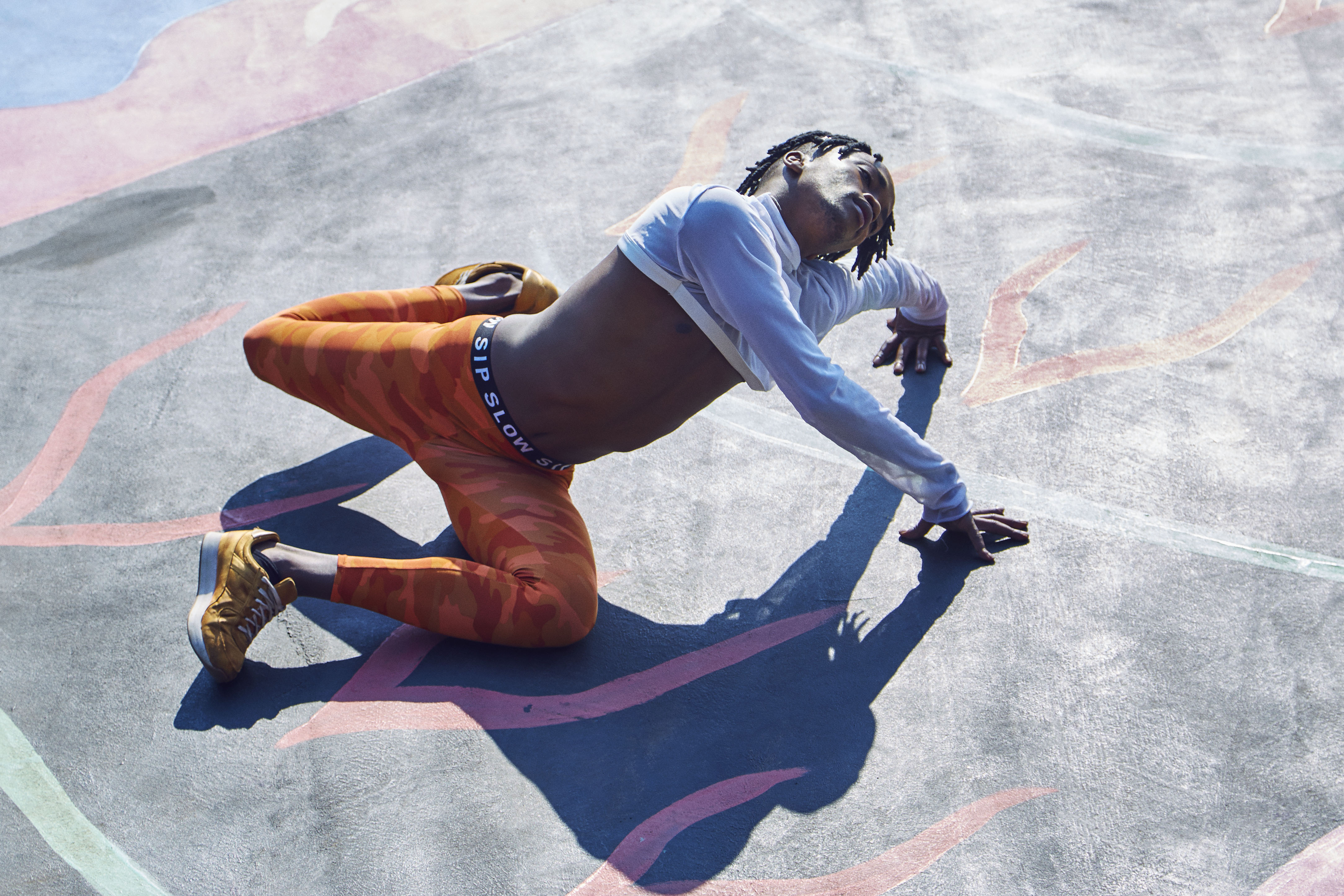 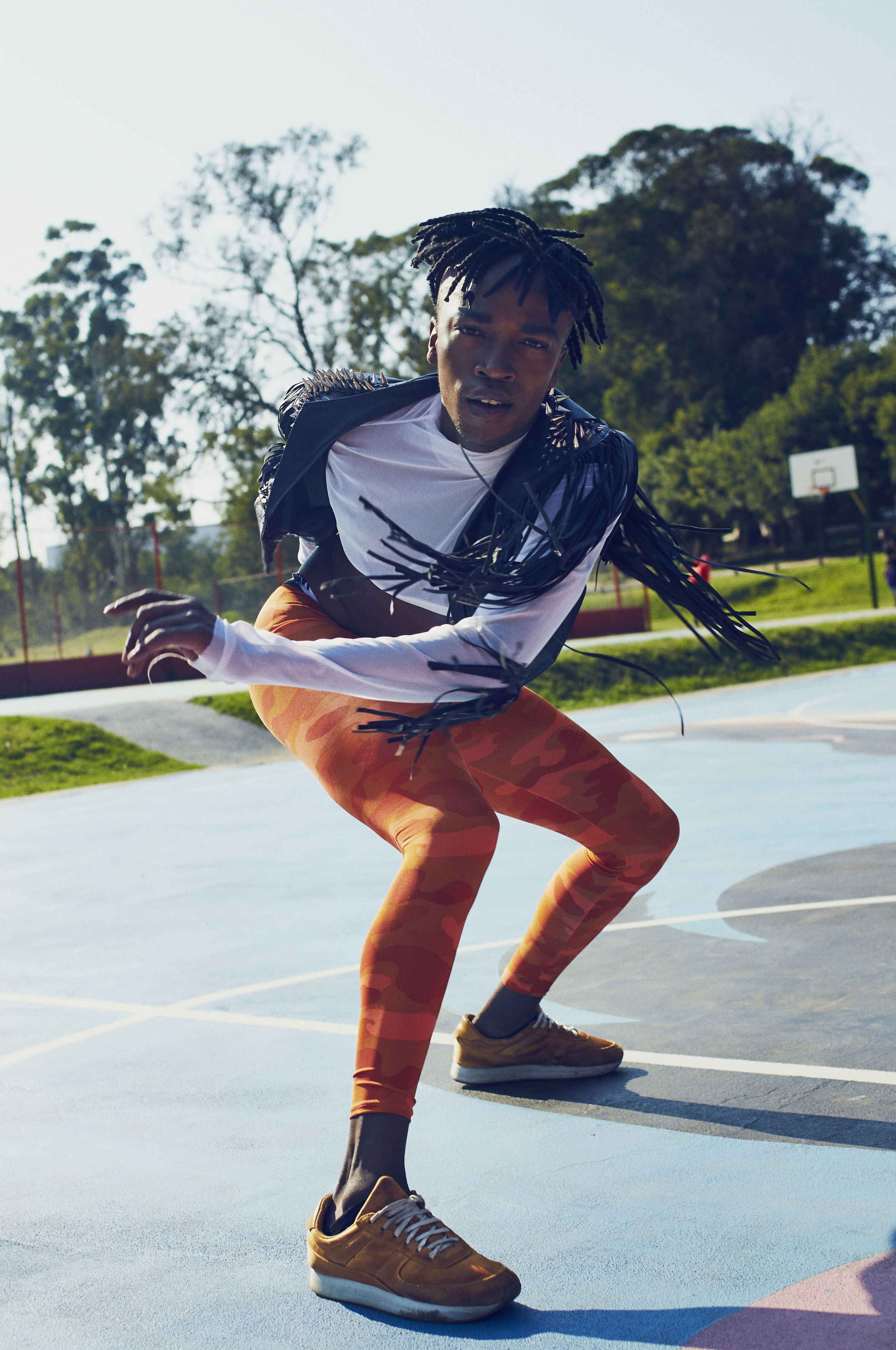 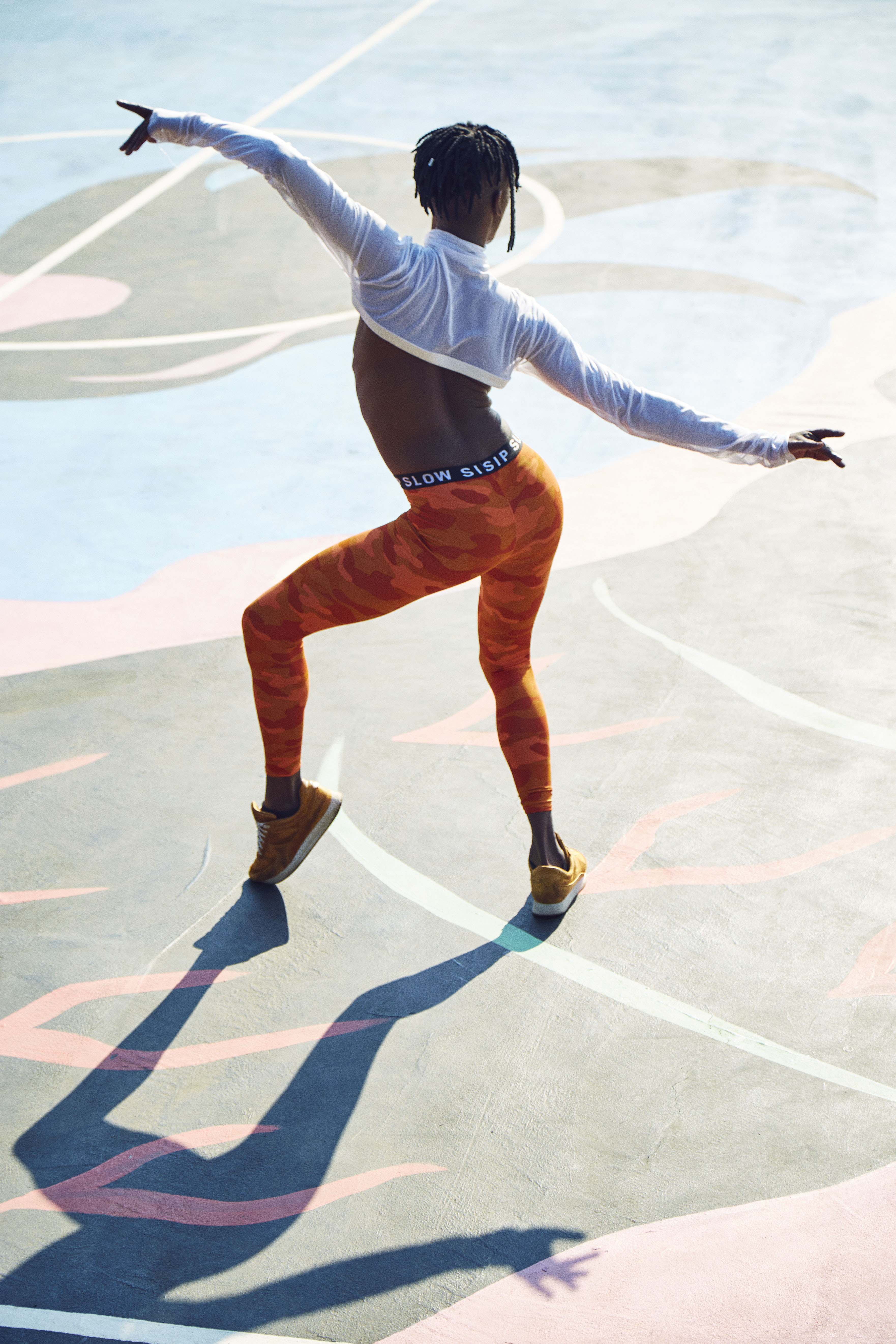