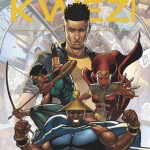 In the last decade superheroes have towered over the popular culture landscape.  Although the market is dominated by the US, it’s clear that these characters have a global popularity. Marvel movies regularly clear up at the box office, while figures like Batman and Superman are universally recognised archetypes. South Africa has gotten in on the game, with the Johannesburg CBD being decimated by the Hulk in 2015’s Avengers:  Age of Ultron.

The CBD is also the site of a key action scene in Loyiso Mkize’s excellent series Kwezi. Focusing on the adventures of its teenage protagonist, Mkize creates brash pop art with a local flavour.  Kwezi is an image conscious youth who uses his powers to fight crime while looking really great doing it. The first issue starts mid-action with him soaring through the urban canyons of Joburg, before teaching a lesson to arrogant SAPS officers. Straight off the bat, the series shows itself as a fantasy which is strongly rooted in everyday South African life. But as part of his hero’s journey, Kwezi soon realises that his powers mean more than self-gratification. The urban setting gives way to a hidden fortress high in the Drakensberg and tales of lost civilizations. Mzike takes inspiration from Zulu and Khoisan culture to map out new myths for 2016.

The artistic and narrative confidence shown in Kwezi has garnered international attention, with the massive ComicsAlliance site listing him as a creator on the rise.  Born in the Eastern Cape in 1987, this project is a culmination of a career spent mastering graphic arts and design. After studying in Cape Town, he landed a job on the Super Strikas book, while also painting and exhibiting his own art. He has brought this artistic skill into his comic work, creating an entertaining story with hidden depths.

Jade Ayla – Getting her designs and illustrations on fashion, event posters, music releases and more