Of Building and Blackness — a conversation with artist RAMO - Bubblegum Club

Some time ago, I lived in a city that had already been destroyed a few times over. The reasons have always been similar—strong winds coupled with the wide-spread use of candles by the population mean fires spread easily. The result? A city destroyed and rebuilt again and again. And while the destruction has always been of great proportion; some things do manage to “survive” and I found myself presented with one of them. This thing to survive or so-called survivor in my case, was a simple corner house. Its walls were made of bricks practically medieval and its wooden structure had practically melted down. The house really seemed to have waves in its walls as its structure was deformed because of the high burning temperature—the person who took me to the address to meet this eccentric house made a request to me, “lean against the wall, pass the hand”. Bear in mind; the house was in public space and this was long before any contemporary pandemic. I put my hands on the walls, without much excitement thinking to myself “how many people have lived in this house, leaned against its walls, walked to it from the streets, or even noticed it at all?”. As it would turn out at that moment in that house, that both—the house and moment—were quickly heading towards the field of memories in my head which I doubt I will ever forget. Another thing I thought about is how everything in that place around me was built? 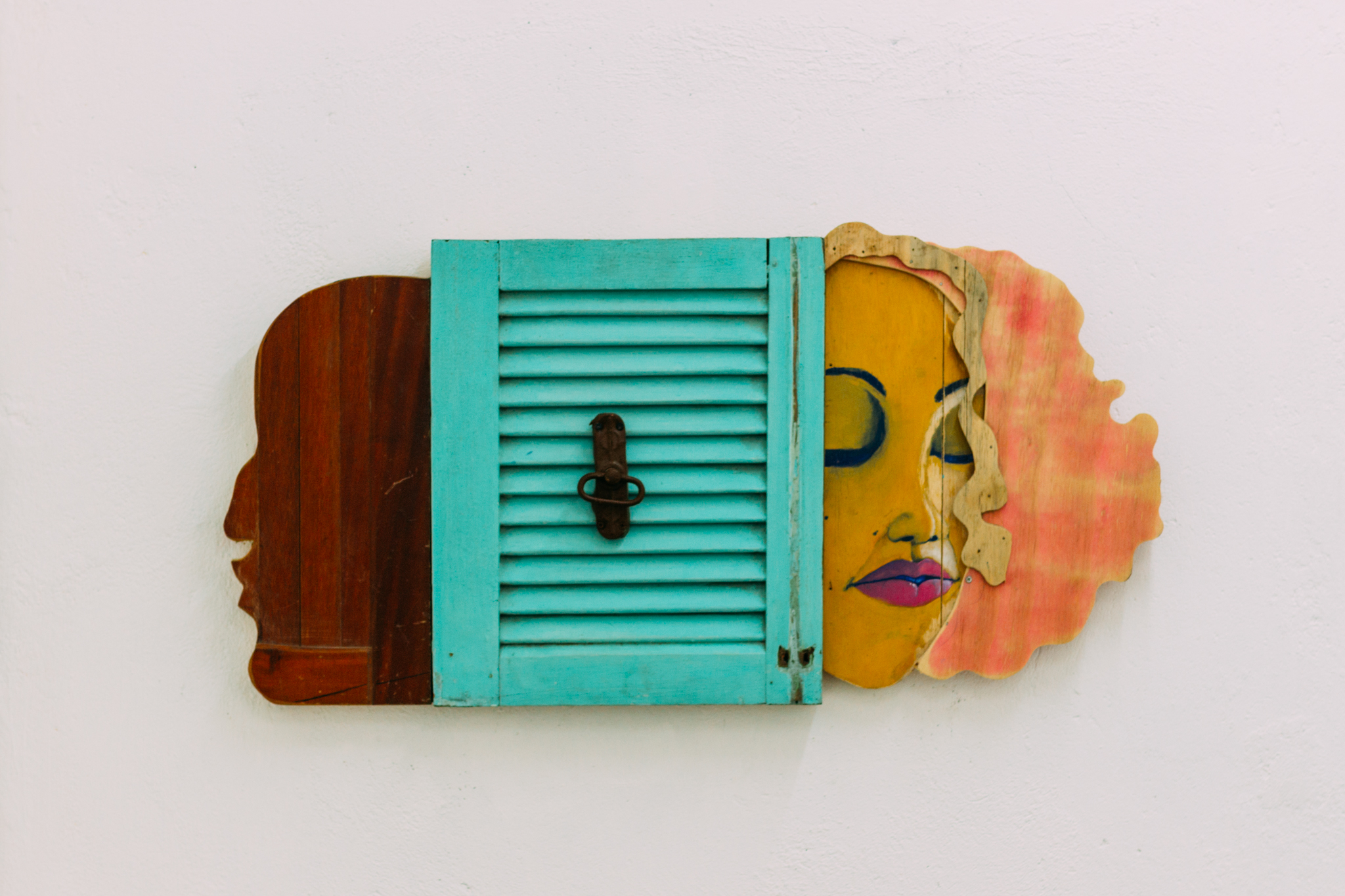 To speak of construction in Brazil is extremely delicate. Brazil is a country built by slaves, but one which carries in its belly the signatures and registered names of Europeans. Subjectivities that become forgotten constructions—in their social and material sense—although fully fleshed thus making it possible to touch the immaterial in a sense. I think that this offers some kind of disruption to colonial logic. It is by deconstructing that one builds—just as in some cases, mainly artistic—that it is by building that one destroys. The artist Ramo focuses his research on the verb to build. Within his linguistic use, this verb can mean and be used in several senses such as; to build a construction, to manufacture something, to conceive of something (creating), to draw, to organise according to an order, to structure, to frame and to merge something. It is a multifaceted verb. Ramo lives in Mauá, a city in the metropolitan region of São Paulo. Mauá is part of the so-called ABC Paulista, an industrial region and is also considered one of the so-called “dormitory cities”. Its artistic construction comes through pedagogy and communication through drawing. In a conversation with myself, Ramo opens up about his work, talking inspirations, colour use, aspects of his everyday life merged into his work and unpacks the construction of Black in Brazil. 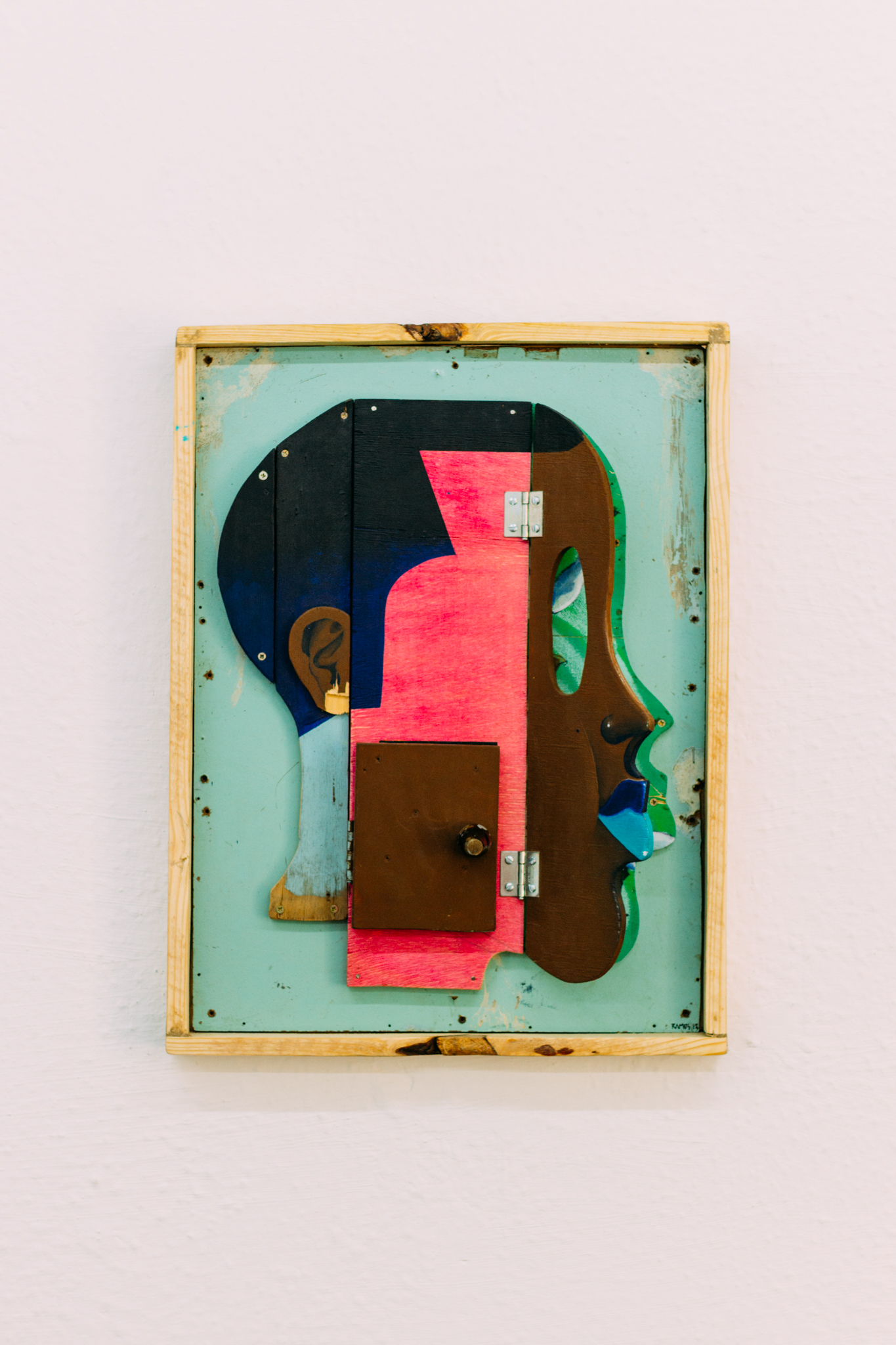 One thing that really attracts me and draws me attention in where your work is concerned are the materials and colours used. I think it calls attention to the aspect of touch and the spectator’s connection to the work. Why this choice especially given that galleries have a great aversion to touch, “do not touch the work”. What do you think about putting artistic work an untouchable pulpits?

For me, it is an automatic platform of opportunity—because it is the opportunity for you to provoke the system and question “why are these objects so untouchable?”. I think that this tradition of not touching the artistic object is also a very Eurocentric tradition. It is very common in all other nations to have popular manifestations where a certain symbol only becomes powerful through the touch; of a shaman, of a dance. It is very necessary that there are other ways of relating to the work and for me, it is an obligation to make these contacts. Whenever there is this blockage, I propose something to bring this potency back, I think it activates the object. It gives it a very powerful energy of dialogue. As for the colours, I am still discovering how to use them, but what I realise is that in the territory where I live—Mauá—it practically appears through the train line. This line, on which I cross to go to São Paulo, has become the turquoise line. As I live in this constant going back and forth to São Paulo, from living in Mauá, but working in São Paulo, I believe that this colour has been staying inside my imagination. I am also a big fan of Cartola’s work, so this green and pink which is very characteristic ended up sedimenting inside my work. The roses, purple, ended up staying. 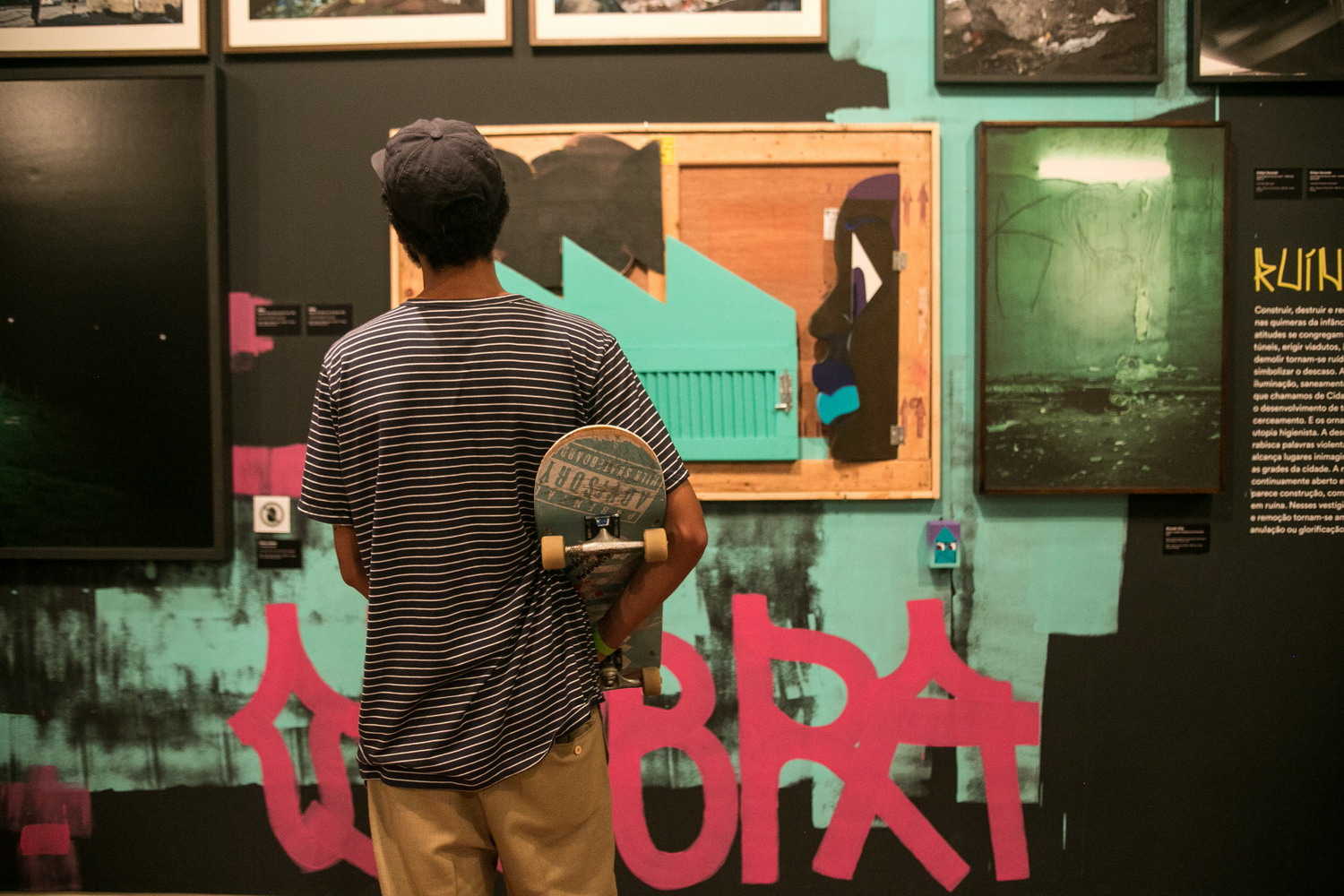 The references of Grafitti, Pixo and other cultural manifestations are very explicit in your work. What is it like to take it inside a gallery?

In the beginning, it was strange, today it is a delight. Because that’s who I am and to perceive it within my work is very good because that’s exactly who I am. To try to hack these universes was very difficult—they always tried to correct me from a Tadeu Chiarelli perspective because I used a lot of wordplay in my speech. “In contemporary art, there is no room for play” but if you look at contemporary art from African traditions, play is founding/abundant. That’s why people should touch my work. The work has doors and possibilities for people to open the layers because it is our tradition. In all our classical tradition play is fundamental, it can be from carnival, capoeira itself, graffiti, frevo… Finally, joy is very present in this process and today this is it, I provoke these tensions.

What are “ritual spaces”?

I think the body is a ritual space. So where there is the occupation of a body, of a mind of a psyche; a process of a ritual space already begins. This place is happening from the moment I propose these activations in the work. For example, in my work Dormitory City, it only really happens from the moment you touch it and open layers, the doors, the hatchways. From the moment you touch it, I think it breaks into the ritualistic. From this contemplation, from this level of the material and object—there begins another ritual, which is the ritual of touch, of affection, of perception, of dialogue, of sadness, of smiling. Then you begin to break this disposition of only seeing. I find it very limiting to only “see” during the process. 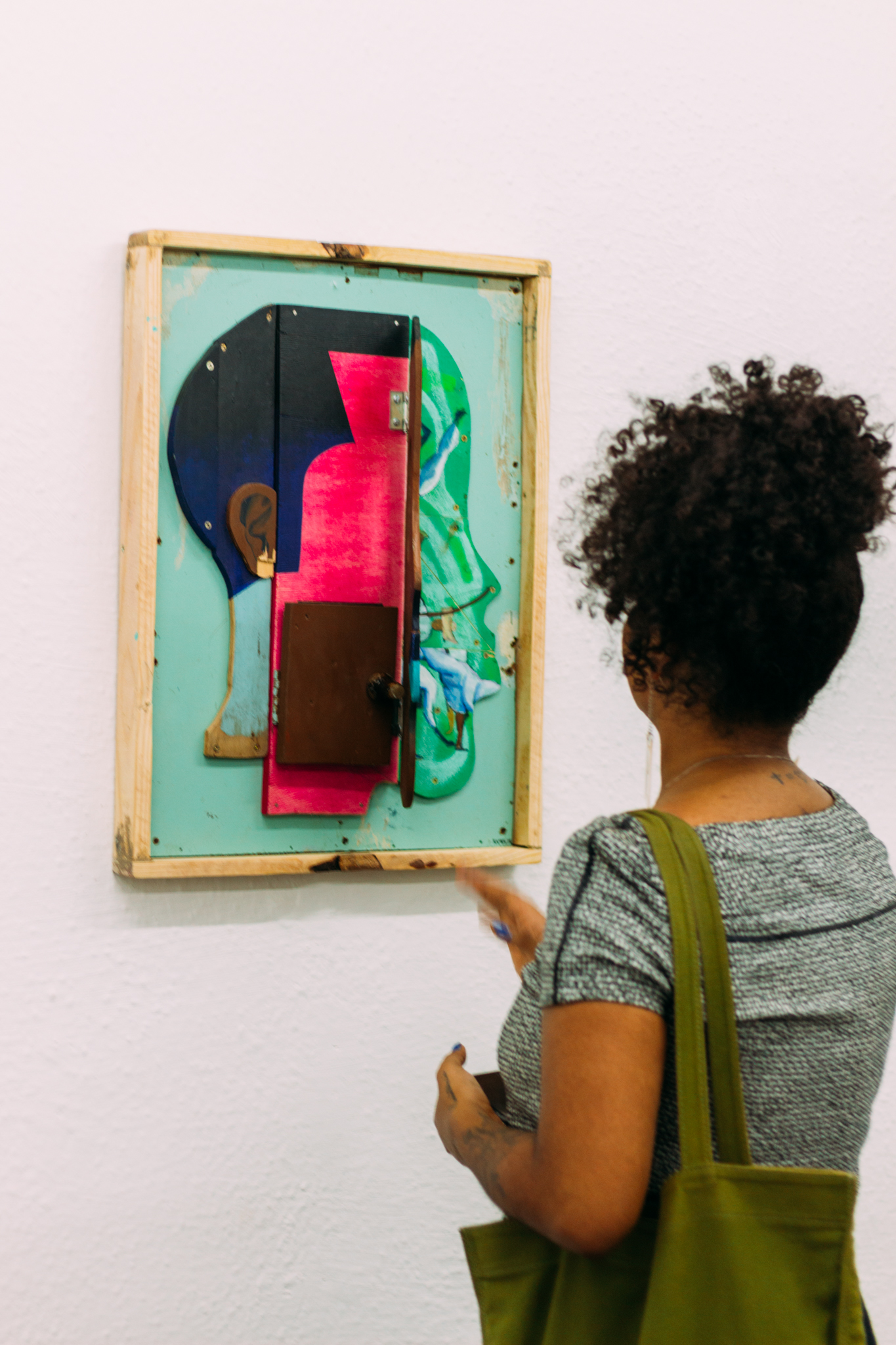 Your work seems to hold strong connections with the verb to build. What do you want to highlight and explore with this framing?

I strongly believe that the verb to build is intrinsically linked to the African Diaspora community throughout our continent. For the simple fact that our ancestors came to practice many of the cheap, hard labour hands. So, some techniques have been developed here with this practice of civil construction and technological construction. It is very embedded in our practice and reveals a lot of the mechanisms involved in this kind of work. Therefore, when I do this exercise, it is an exercise to rescue the ancestral practices. I draw a parallel on what is work (what is a work of art and what is work of civil construction and in general). I collect records of construction processes and at the same time, I realise that there is a very strong gentrification process [taking place] in São Paulo—the architectural memory of the city devours itself at every moment. My background in graffiti is very strong so I fused these narratives into a unique process.

The notion of construction and of Black people in Brazil is an extremely delicate one. With several parts of history being denied or censored, it is difficult to excavate this construction. In what ways do you think that your artistic output contributes to the solidification or conversations around these notions of construction?

My work, or at least my pretension, is that it works as a binder. It would be like cement. It does not restore, that it is this individual as a whole because he have been fragmented. However, from this fragmentation, my work tries to propose a possibility for him to know various frameworks of what it is to be black, within America. So the exercise I have to do is for him to agglutinate what he has and of an aesthetic and symbolic function that makes it possible to be much more than he is. I am not completely sure if my ancestors were Bantu or Yoruba, but today I have a possibility that they did not have, that is to be what I want. I can be Bantu, Yoruba, Malé, Be Patacho, Munduruku, I can be Guarani, because contemporary art also allows me to use it as a platform. So there is trauma, but trauma can be used for another creation—as if it were a capoeira game, you can use malice to surround the problem and deal with it in a strategic way. 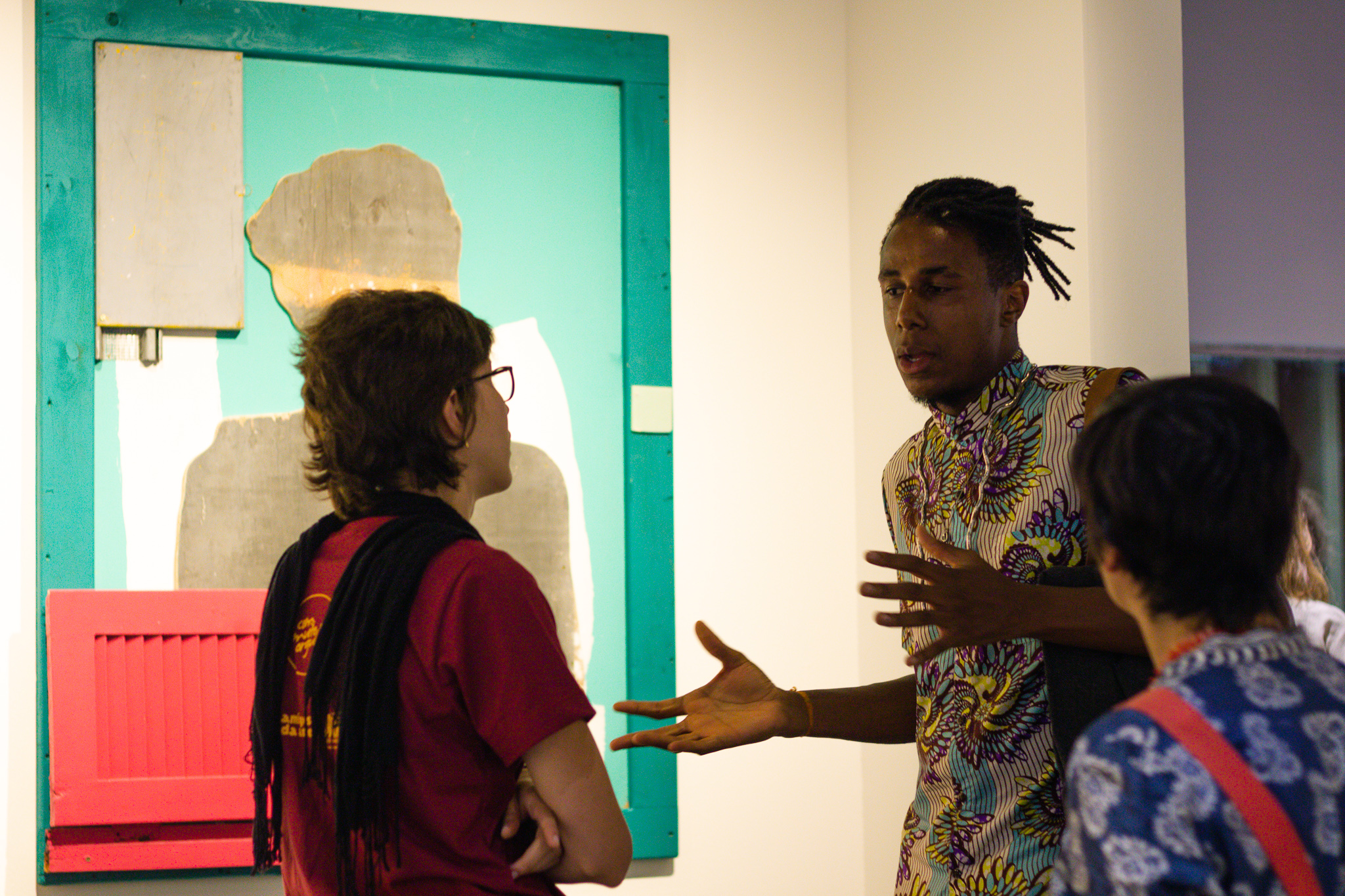 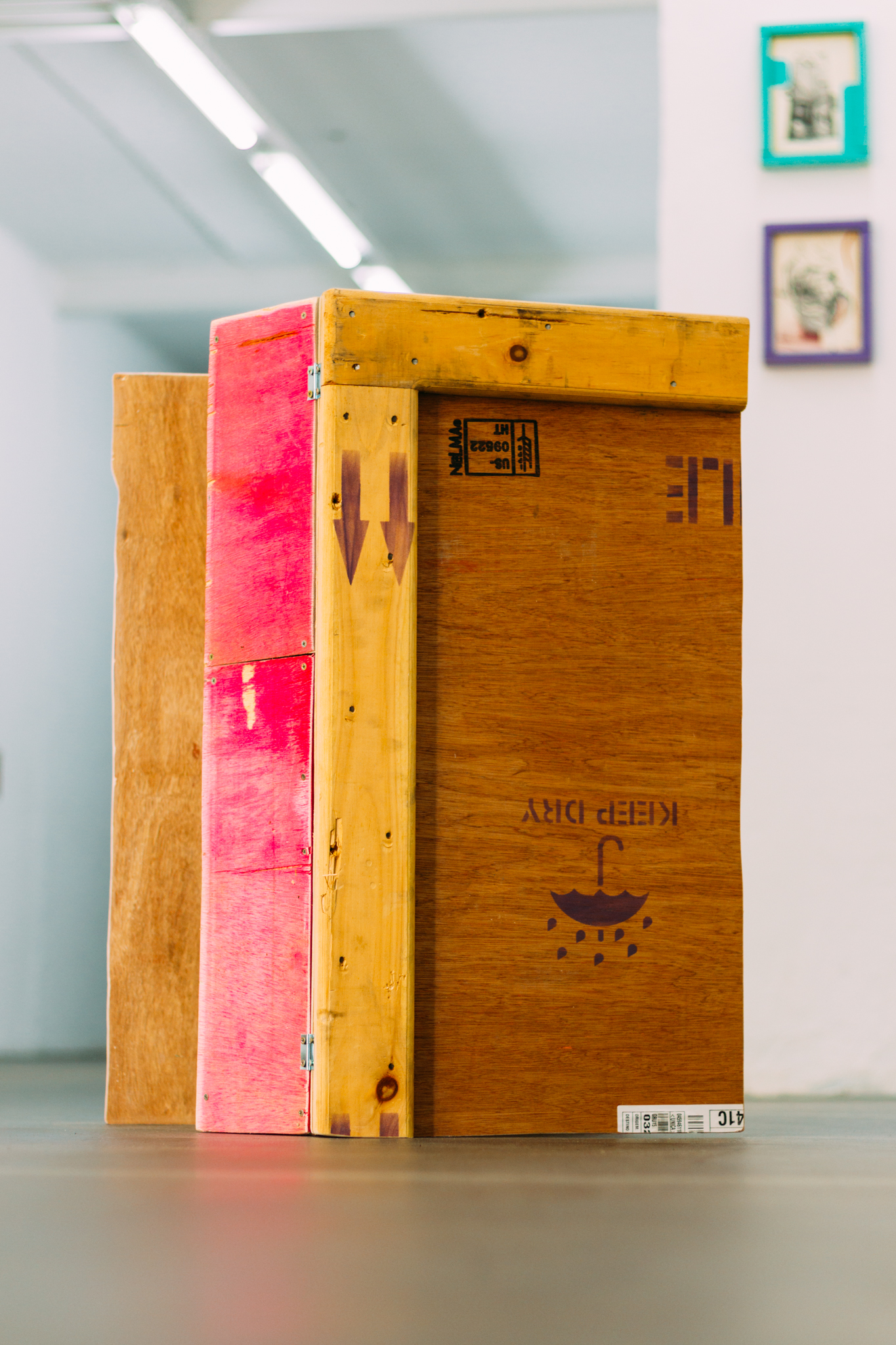