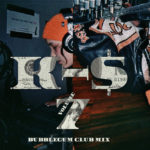 In her bio she is described as an “internet sensation” we wouldn’t argue with that. K-$ (real name Kalo Canterbury) is a young dj on the rise. We first noticed her for a carefully curated Instagram feed and her very delicious OG-streetstyle looks but its through her sound that she is really starting to make waves. Hot off the release of her mix for NON (featured on Rinse FM) we spoke to K-$ about the exclusive mix she created for us, what she is up to at the moment and the importance of the internet to her as a dj.

Can you tell us a bit about the mix you’ve created for us?

With this mix, I wanted to create something lekker and bouncy. The songs I chose are all well recognised

contemporary music, especially in hip hop. Paying homage to some of the best bands, groups and

artists to ever do it back in the day, in a commercially successful sense. Also, each of these songs

carry that feel-good quality. Don’t tell me you can sit through any of these songs without busting

out a quick boogie. I also named it “Green Tea Disco” because just like green tea, it’s refreshing.

club when I spin.

What exactly is LIT…and can you tell us a bit about LIT Bassment Ting?

LIT is a squad of DJs, producers and artists based in Cape Town. Well, we’re actually more like a

family filled with proper experienced big names like Sumo Jac and Dplanet, to those of us new to

the game and trying to come up, like me. It’s amazing in the sense that we all learn from each

other, regardless of our level, so we constantly grow together. We can all hold our own as artists

and entertainers, but we’re stronger together. We’ve all got each others backs, we all want each

other to thrive – the support and love is unconditional and the banter is never-ending.

If I could sum it up, we just have the same idea of what good fun and good music is, and we want

to share that with whoever is open to it. That’s why we do LIT Bassment Ting. We went from

throwing a weekly party at Bazinga Bar, to now throwing a monthly party on First Thursdays in the

basement of House of H on Loop, which has kinda become our headquarters. Our first one was at

the beginning of October and holy shit, it was LIT. We’re all excited about our second one, taking

place on the 3rd. We plan to take over Cape Town this Summer. Just watch.

Something exciting seems to be brewing in Cape Town, driven in particular by young

people of colour and also queer / non binary individuals – why do you think this is?

There’s a very positive thing happening in Cape Town where people of colour,

queers and non-binary people are supporting each others art, ideas and movements. This support

system has almost created a sense of comfortability, safeness and self-acceptance, and because

of that we’ve become blatantly unapologetic. We don’t just dala what we must, we dala whatever we want,

however we want, whenever we want to. It’s a gorgeous thing to witness, and an honour to be a part of it.

Why has Joburg never been blessed with a K-$ set?

I actually played Joburg once back in 2014 at Kitcheners. At the time I basically knew nothing

about DJing in a technical sense, I just wanted to play some of my favourite songs to a crowd that

would understand the music too. Things have changed a lot since then and my skills and sound

have evolved, so I’d love to come up to spin as often as possible now. My pops recently made the

move to Jozi, meaning I’ll be in the city more and more, and hopefully I’ll play and make

connections every time I visit. On top of that, Joburg homies have always showed me love whether

they know me or not, and I know I can bring something refreshing to the table. Holla at me!!!

You truly are an “internet sensation”! How important has the internet been for K-$?

The internet is everything to me. On a personal level, I taught myself how to play instruments and

DJ using the internet as my only resource. It opened my mind at a very formative point in my high

school career and showed me how big the world is. I found many sources of inspiration lurking in

various corners of the web that influenced my style, the way I think, the way I learn, the shit I like,

my taste, the way I carry myself. I think because I respected and understood the net when I was

young, using it as a tool just came naturally. Like my Instagram. That started as pure fun,

pushing an aesthetic that was true to who I am and no one else, and that persona has just taken

on a life of its own and I’ve continued to grow with it. I think it reflects in the music I play and the

way I play it too. The internet really is a wealth of knowledge right at your fingertips, and despite

the way many assholes abuse it, there’s so much we can gain from it.

A woman so astronomically gifted, her name is Deniece Marz

Death of the body and the death of the spirit: disparities between religion, culture and ethnic perceptions of marriage. Love and marriage g...

Pietermaritzburg isn’t exactly known as a hotbed for local talent. That’s not to say that there aren’t countless talented people from Maritz...