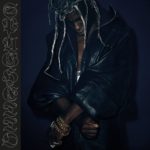 British artist Gaika has been gaining a lot of attention for his enticingly dystopian style. On 2015’s Machine and this year’s Security, he blowtorched mutant grime, toxic industrial and subterranean dancehall into incendiary sonic devices. His dread-soaked worldview has often been compared to the trip-hop of Tricky who, exactly 20 years ago, unleashed the apocalyptic Pre-Millennium Tension. Gaika is sound tracking the tense background of post-millennial tension ie: everyday life circa 2016- surveillance, exploitation, murderous police, a buzzing hum of entropy and failure. Even his titles feel like pointed commentaries on our time. Security is one of the buzzwords of modern politics, the term used to justify terror against the immigrant body, the foreign body, the poor body. And what does it even mean to be secure in a world where you supposed to feel grateful living from paycheck to paycheck, pacified by machines which record your every move? The current arch of capitalism is to replace human workers with automation, leaving large segments of the world as ‘surplus population’. Gaika’s music sounds like a dispatch from the ghettos of this near future, bodies caught in silhouette a second before the drone strike. However, the grim, last night alive ambience is offset with flushes of warmth and hope. Security highlight ‘Last Dance at the Baby Grand’ sounds like a flash of blue sky peeking through polluted clouds.

And last week, he dropped his surprise project Spaghetto。The eight tracks build on his earlier work, while pushing it in a (relatively) more accessible direction. Songs like ‘3D’ maintain the murky paranoia, but there is more of a focus on hooks. But there is a new lightness to his trademark hardened production, like on the mellifluous ‘The Deal’. Ambitiously, this EP is part of a trilogy with Another Hole in Babylon and Glad We Found It promised in the coming months.

In interview’s he has spoken of his love of the classic cyberpunk anime Akira. Katsuhiro Otomo’s 1988 film is a delirious tale of rebellion, technology and transcendence. It’s an appropriate totem for Gaika. With each successive release, he is plunging further into the wires and screens of an oppressive cyberculture, searching for what comes out on the other side.

Gaika Performs in the Heart of Jo'burg's Party Culture – Kitcheners

Film, music and art events to attend in 2018