Of Black merfolk and relationships with water: David Uzochukwu’s ‘Mare Monstrum/Drown in My Magic’ - Bubblegum Club

It is not for nought that Black people go to the water to pray and commune with our ancestors — what the water gives us, reaches beyond the facts of this material, temporal enfleshed existence. Mare Monstrum/Drown in My Magic is Galerie Number 8 represented Austrian-Nigerian photographer David Uzochukwu’s ongoing photographic series initially began in 2016. Monstrum/Drown in My Magic channels the power of myth by explicitly visualising Black merfolk and envisioning water as an expanse which the characters can cut through; be safe in. “No longer are they subject to the whims of the tides, nor drift into a void that holds the potential for destruction. Instead, they are equipped to survive and find freedom”. The photographs — with their rich colouring — are otherworldly, evoking genealogies of African magical realism and seem to perform the work of linking Blackness, inevitably, to a passage through the waters; be they waters of the Atlantic Ocean or the Mediterranean Sea, from the Middle Passage to contemporary movements of migration. An extract from the press release reads:

The potential of self-actualisation lapping at someone’s feet always calls to mind the blood, sweat and tears of those who have come before them. Can new lore shift the entanglement of Black bodies and their environments, making unquestionably clear that they belong? 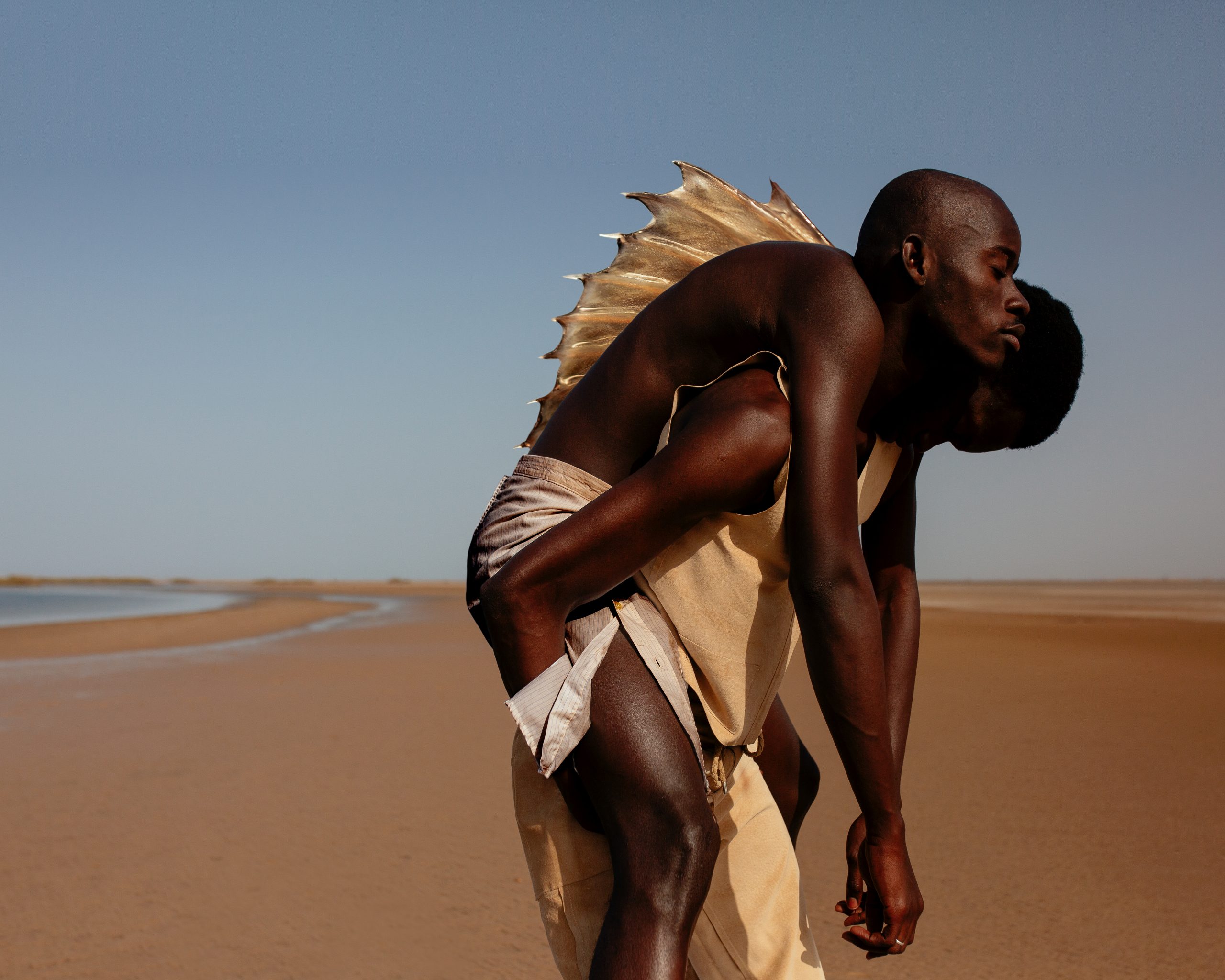 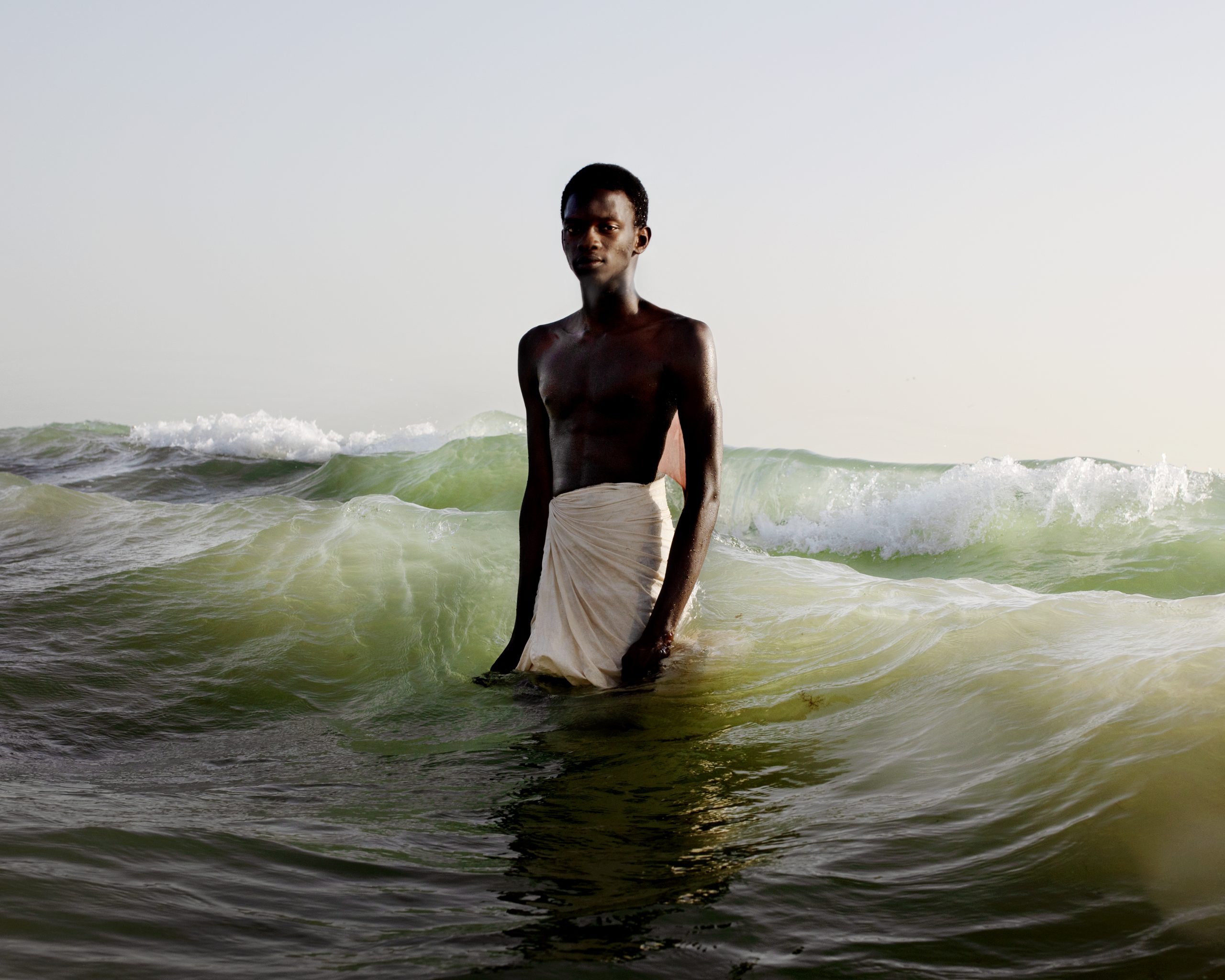 Born in Innsbruck, the Austrian-Nigerian artist began his photographic practice as a teenager with intimate portraiture that soon gained recognition. Currently studying philosophy at Humboldt University of Berlin, David Uzochokwu has also collaborated with artists including Ibeyi, FKA twigs, Pharrell and Iris van Herpen and was named ‘One to Watch’ by the British Journal of Photography in 2020. Uzochukwu’s photographs deliver you into warm and sensitive worlds where humans and nature entwine in search of belonging. Expanses of sand, water or sky embrace Black bodies emanating strength. Often their limbs morph into fantastical forms against hyper-real landscapes that offer a space for contemplation. I think of this series as existing in some kind of imaginative and perhaps even spiritual conversation with Ben Okri’s seminal text The Famished Road, the part in the story that tells us “This is what you must be like. Grow wherever life puts you down.” And the parts that say:

One human life is deeper than the ocean. Strange fishes and sea monsters and mighty plants live in the rock-bed of our spirits. The whole of human history is an undiscovered continent deep in our souls. There are dolphins, plants that dream, magic birds inside us. The sky is inside us. The earth is in us. 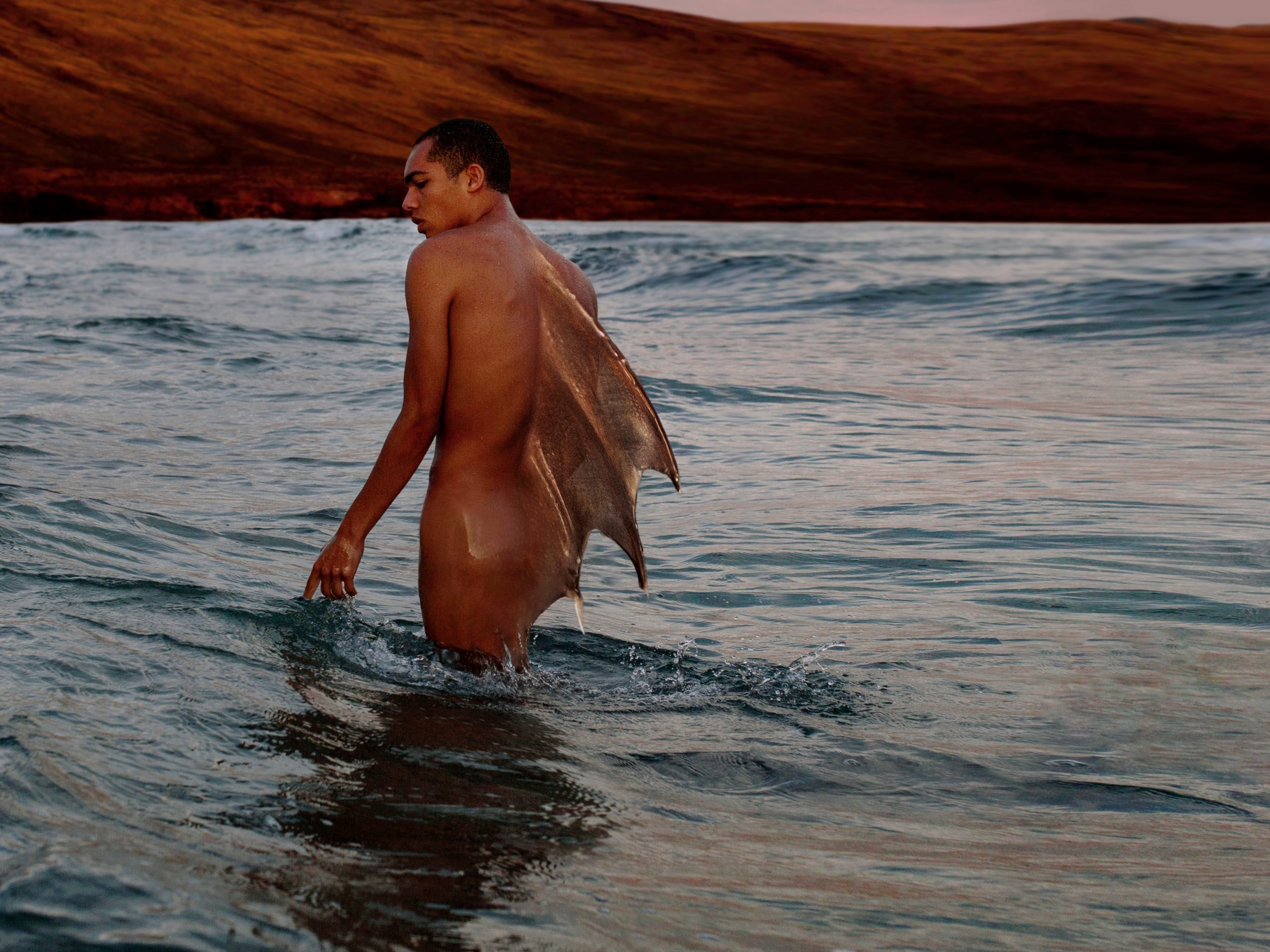 As with Okri’s writing, it’s this interplay between the natural and supernatural, between the visible and invisible that imbues Uzochukwu’s mages with an arresting presence. The ongoing series uses the image and ideas of Mami Wata (African/Black mermaids) “to explore both the historical relationship between the African diaspora and the water, and contemporary politics around migration.” A great part of the images were made in Senegal in 2018 and show mermen emerging from the seas protecting and healing one another. The most recent images came together in Germany and introduce a whole community of hybrid merfolk in states of solace and rebirth. An incubated baby, a proud centaur and a tender couple, among others, inhabit a boundless realm. Writing about the digital show for Unseen Magazine in an essay titled A Fantastic Turn, Ekow Eshun writes:

The long history of oppression experienced by people of colour in the West makes an unlikely context for art devoted to the fantastical. All the more so when you consider recent developments such as the racist rhetoric and anti-immigration policies of the Trump administration, the chilling roll call of African-Americans killed by US police (Freddie Gray, Eric Garner, Philando Castile) and the bigotries unleashed in Britain by Brexit (monkey chants at football matches and a spike in xenophobic hate crimes). Under such conditions, it’s worth asking if a turn to the fantastic by black artists is driven by a desire to escape from the charged and painful circumstances of daily life. Yet the opposite seems to be true. What characterises much of the imagery being produced today is an eagerness to grapple with urgent questions of culture, identity and history– albeit through imagery that accentuates the extraordinary rather than the everyday. (…)

Ultimately, the Berlin-based David Uzochukwu – whose recent Drown in My Magic project situates a panoply of mythical water creatures within arid landscapes – may speak for all the artists currently finding inspiration in fantasy. The goal, as Uzochukwu puts it, is to reclaim the narrative of fantasy’by embracing‘the alien otherness projected onto black bodies in a way that could be read as pure empowerment.

David Uzochukwu’s Mare Monstrum/Drown in My Magic can be viewed on Artsy here! 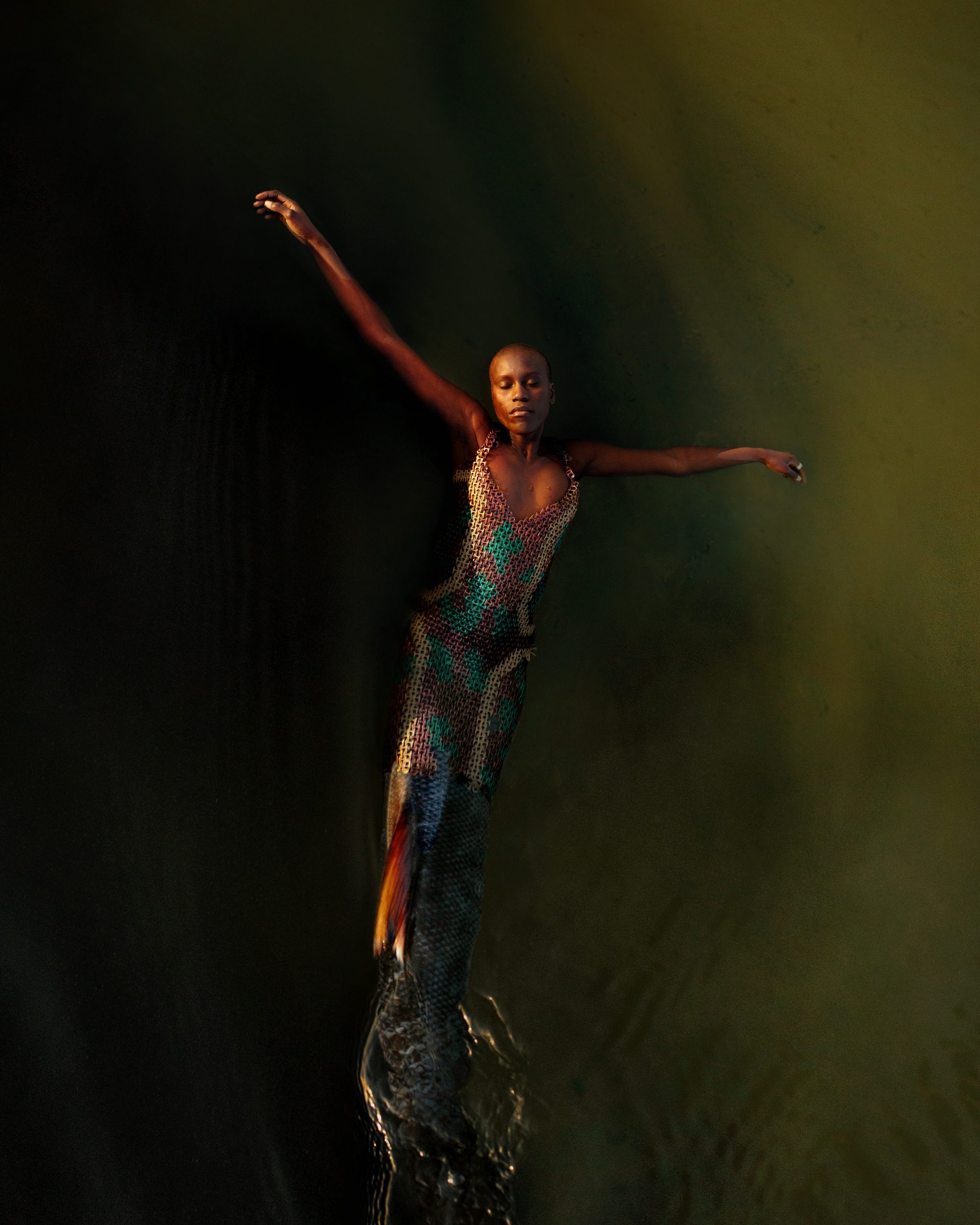 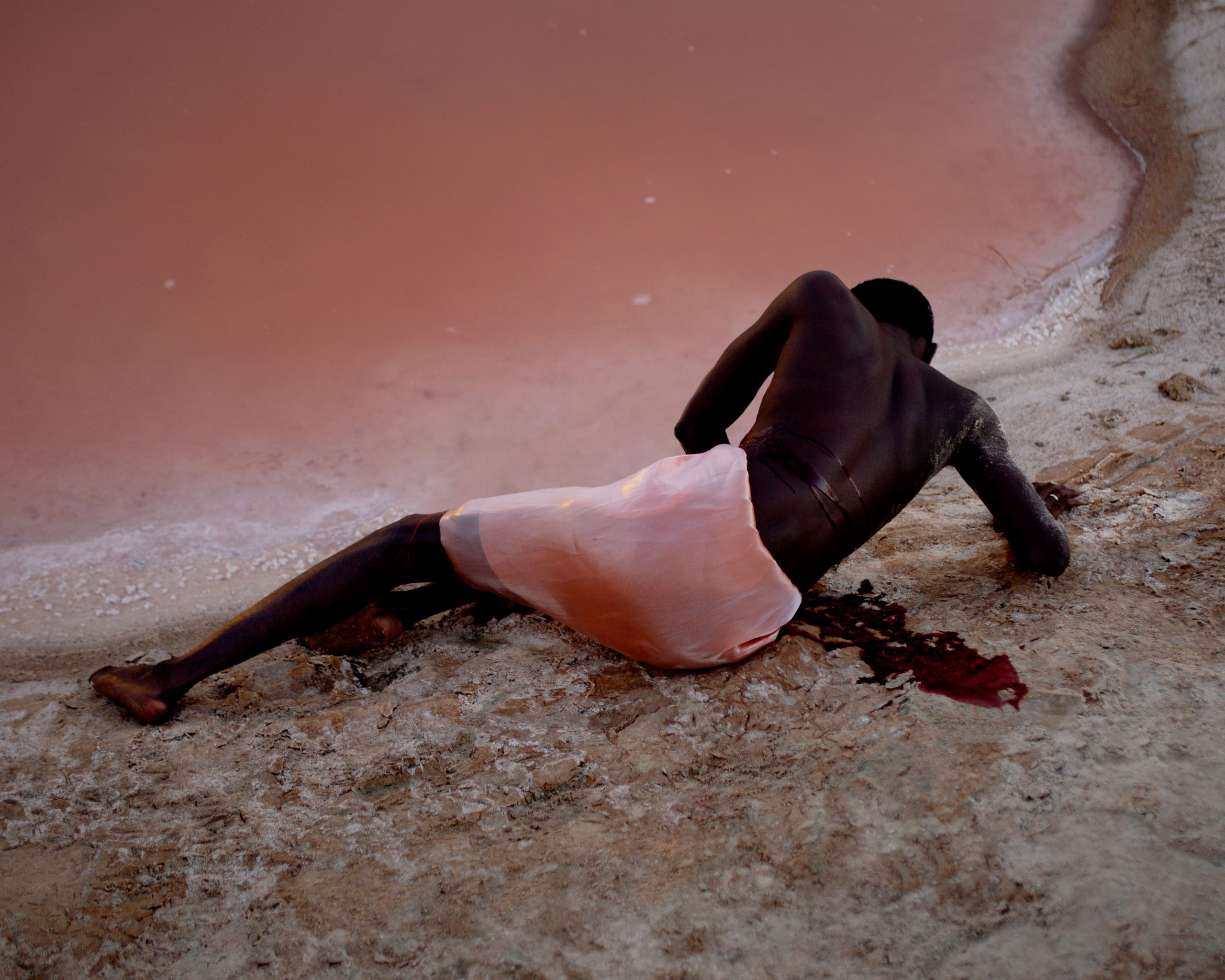 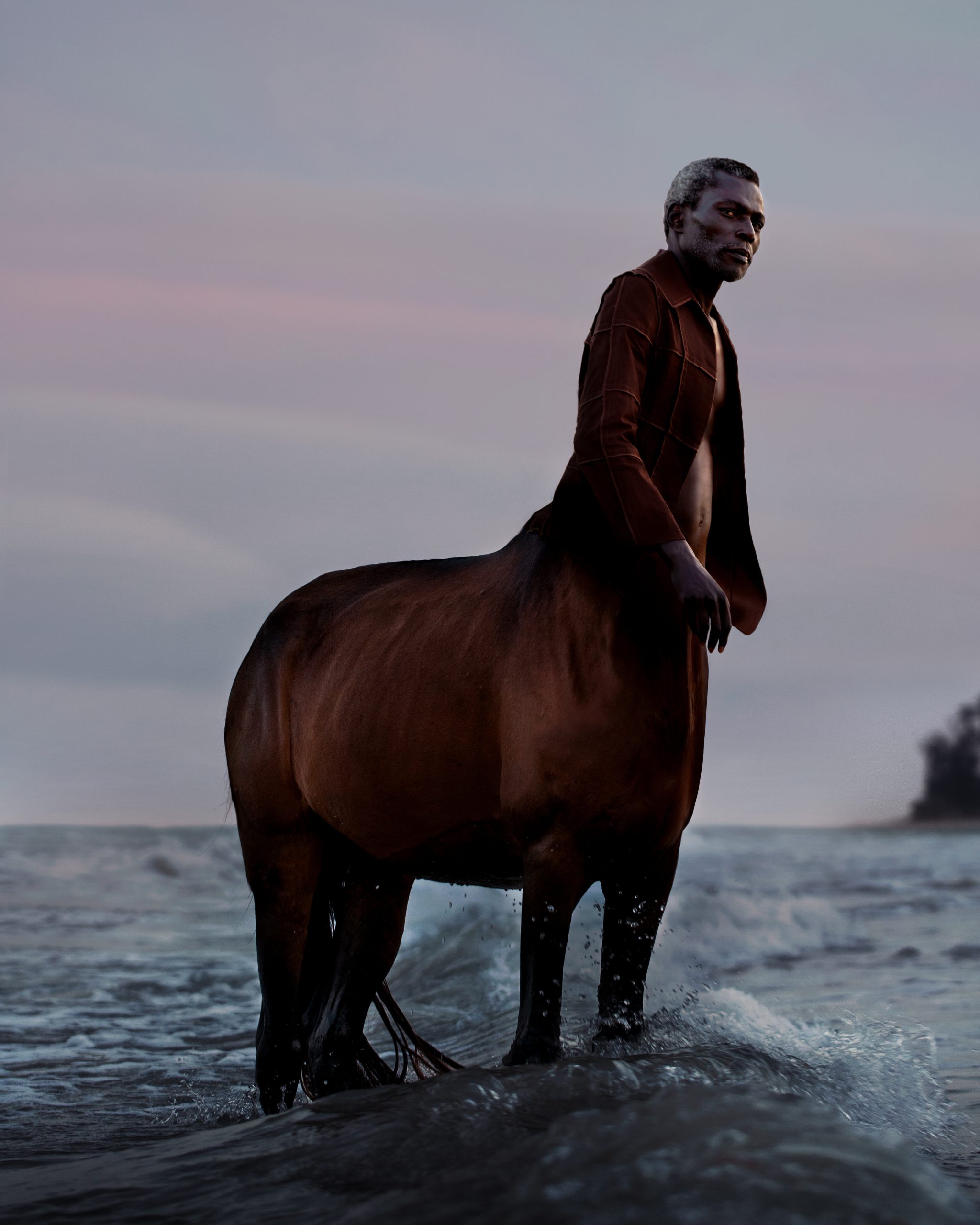