You never know where the decisions you make will take you. Back in 2011, I got a few friends together to start a blog that would focus on the Durban music and art scene that we thought wasn’t getting the love it deserved. That, and try way too hard to be Vice. Forgive us, we were young. Things would later come full circle when I wrote for Vice’s music site, Noisey, but I’m getting ahead of myself.

I used to call myself a writer for as long as I needed a title for “what I do” other than “bartender”, although at 23, the only pieces of writing I’d had published were a poem about wrestling in my primary school yearbook, and a review of Every Time I Die’s ‘The Big Dirty’ for blunt. Other than that, most of my writing was reserved for myspace and Facebook blog posts that often caused shit-storms of hundreds of comments. When I eventually decided that I couldn’t exactly call myself a writer if I didn’t write, I figured starting a blog would be the way to change that.

Around the time I was mulling over my identity as a writer who didn’t write, I met a highly enthusiastic guy called Stathi Kougianos who I told about my idea of starting this blog. He told me he was a designer, I thought he meant web designer, so I asked him to join me on my quest. Turns out he was a graphic designer, but his work ethic made him indispensable from the start and he turned out to be the backbone of the site for many years. Sheldon Lotter would be the one to actually bring the site to life with his coding mastery. I also approached Russell Grant who is one of my best friends and one of the smartest people I know because we’d spoken about starting a ‘zine for years, and I admired his writing skills. If you’re going to start a website that you want people to read, it’s probably a good idea to get some good writers involved. Soon after that, Luke Smith got involved, and we had our core team for the launch of Durban Is Yours. From there, we approached the rest of our friends in the Durban hardcore, punk, and indie scenes who we thought had good opinions or could take a decent photo: Fuego Heat, Grant Payne, Russel Smith, Matthew Stroud, Gareth Bargate, and a whole host of other talented and not-so-talented individuals.

We came out guns blazing with a launch party at Unit 11 and we made sure we had 2 weeks of content already loaded onto the site. Immediately, we had the attention of our peers in the Durban creative scene and the hits started coming. It turns out we weren’t the only ones who wanted to see different sides of our city represented online. 6 months later, we beat East Coast Radio for Best Music Blog at the SA Blog Awards.

If only we had a business plan other than “If we build it, they will come.” That was my biggest mistake, by far. Because we built it, and the audience came, but we didn’t get that sweet advertising money that blogs around the country were getting. Granted, I didn’t work in an ad agency so I couldn’t just sell ad space to myself like everyone else, but I figured brands would know what the fuck was up and would approach us. Here’s a lesson I learned that you can have for free: You want that sweet brand money? Become friends with someone who has access to the account.

We did make some money from DIY, but it was never sustainable. We’d get product drops from brands of shoes and booze when really, we just wanted the money. But brands don’t get free exposure when they give you money. They do however get free exposure, and make you softer towards them, by giving you their products for you to post on your socials. You can’t pay rent with sneakers though, and there’s only so much you can do without budget. I wish I had someone on the team who was focussed on bringing in money. Like, it was meant to be my job, but I was busy writing scathing commentary about some poor schmucks trying to live their dreams as a Kings of Leon cover band.

So, as time went on, writers and photographers left for greener pastures. Guest list and a few free drinks was no longer good enough as payment for any of us, and things slowly ground to a halt. In 2017, I basically gave up on the site and figured I was done with it until I saw murmurings online of people wanting a Durban blog to showcase what’s going on in Durban at the time. I approached a few of those people, since I already had the platform, and figured we could restart DIY with this new team. For a few months, it worked. Fresh voices were being heard and a whole new range of content was being created, but once again, the lack of budget meant that nobody could really commit enough of their time to make the site sustainable. So now, after 7 years, I’m shutting the site down for good.

When we started DIY, I always said I’d give it at least 3 years. Same length as a varsity degree because I didn’t go to varsity. I figured a 3-year practical would probably be enough to get me into the industry, and I was right. Although like most students, it took me 7 years before I eventually left with my qualifications. I now write regularly for Bubblegum Club (a website created by dope Durbanites btw) and Red Bull, have a radio show on DYR1051, and have had bylines in publications around the world. From Noisey, who I mentioned in the beginning, to the British Airways inflight magazine. Because of Durban Is Yours, I’ve expanded my horizons further than I ever imagined without leaving the city. I am now a writer who writes, and much more.

At the end of the day, I got to live a dream of mine for a while. I found out what it was like to run a relatively influential publication. I also found out that it’s not really what I want. I want to create content, not manage other people. After 7 years, it’s nice to know that about myself. I’d only ever really wanted to be a contributor, but through circumstance and being the guy who just says “Fuck it, let’s do it,” I became a leader and learned skills that will last a lifetime. I do sometimes think what my life could have been had I not taken this path, and it would have been menial, unsatisfying jobs or I’d probably be a scammer trying to sell you Forex. I’m grateful my friends and I took a chance on ourselves because it opened up the world to us. We got to do all the things we read and saw photos of growing up, and write and photograph it ourselves.

We impacted our scene and our culture. I’d argue for the better, although I’m sure there are some detractors. It’s rewarding to know that we had a real impact and real influence, even if the financial rewards weren’t there. We did it by believing in ourselves and our mission. In providing an alternative voice and to put Durban on the map nationally. Nowadays, Durban artists are literally fucking everywhere, and more often than not, they’re getting the props they deserve. More than ever, we’re in the conversation, and I like to think that we contributed to making that happen.

So, if you’re thinking of starting something. Just start. Start today. Start planning. Then approach the people who you think will work with you. Then create the damn thing and take it from there. Because you never know where the decisions you make may take you.

P.S. We’ll be celebrating the life and death of Durban Is Yours on the 22nd of Feb at The Winston Pub. And I’m actually going to be starting a new website, but one where it’s pretty much just all me. Kind of like a blog, you’d say. I hope it takes off. 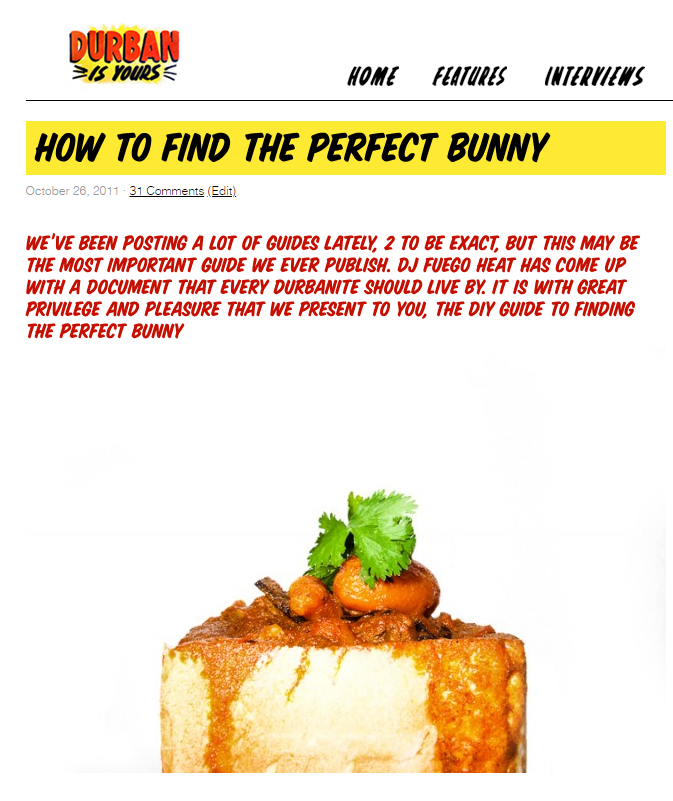 Have you Hurd of Nipho