Intervals of dreaming help us to stand up under days of work… What the memoir writer remembers is not the same thing the poet remembers. He may have lived less, but he photographed much more, and he re-creates for us with special attention to detail. The poet gives us a gallery full of ghosts shaken by the fire and darkness of his time.

With this show I think I am focusing on the abstract, the emotional aspect of people and how they relate, not just depicting pretty people … Sometimes people look pretty and then the card will ‘decline’. There is just a little bit more than what we see on the surface, so that is what I consciously chose for the show – like focusing on the abstract but also pushing the physical all the way up … These works give me Good Feelings.

In a world that only knows how to imagine our lives in shades of ontological deficit and dysphoric feeling; a Blackend Joy may feel like intervals of dreaming – Space yet again becoming the Place, where our laughter carries like music and our bodies move in a dancing ecstasy rather than a fidgeting anxiousness.This time though, the Space that becomes this Place is rooted in the imagination, artistic genius and ever humours social observations of multidisciplinary artist Dada Khanyisa. Their new solo show titled Good Feelings, which opened at Stevenson art gallery in Johannesburg this past weekend on Saturday could be described as a decadent, indulgent and euphoria rousing visual archive of feeling as they put it, “the physical part of the work, I’m very confident in that [aspect] but I wanted to bring it out emotionally so you actually feel it instead of just depicting pretty working people just doing something, they must be feeling”. With this solo exhibition- the first for them in the city and their second solo after Bambi’phone (2018) – Khanyisa wears the hat, or rather, dons i’spottie of both visual memoir writer and poet; re-creating with a sharp and special attention to detail snapshots of social spaces – both virtual and real, while simultaneously giving us a gallery full not of ghosts shaken by the fire and darkness of [their] time, but of characters in moments of collective good feelings despite the darkness of their times. 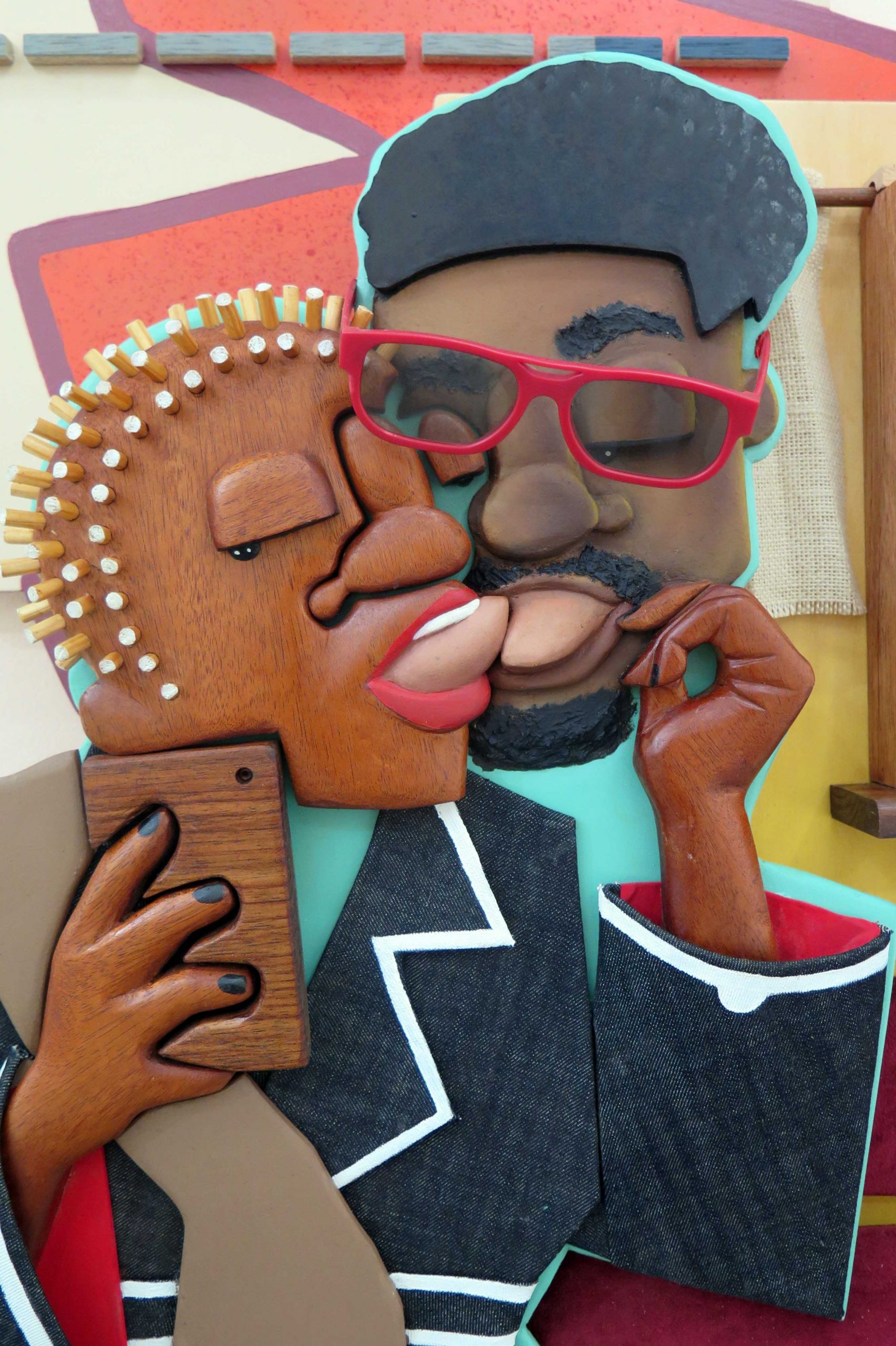 There is a certain meta character to what uDada has accomplished with Good Feelings– both in the execution of the works encompassed within it, and in the exhibition’s very curation that also works to transmit amagood feelings. The circulation of particular forms of affect by the together/apart pieces such as joy, pleasure and love transmits sentiment. These sentiments in-turn function as a narrative structure; one built on the language of affect. Therefore feelings become words, become sentences, become an entire story authored by you and the realities and memories of your subjective experience. As they expressed during the writers walk-about “there’s a lot of responding to each other in the show, most of it is about how people will usually have their own interpretations like based on their own social context, any of these pieces can be rearranged and a new story could come up”. From walls painted in colours reminiscent of i’Ultra Mel, to a mastering of three dimensionality that seems to allow the artworks to extend out beyond confinement on gallery walls thus giving them a presence in the very room; an altercation or conversation you may have stumbled upon while making your way through, a shea butter coco sham activist getting side-eyed for his fuckery; “na sis, cheating is a construct of monogamy, also how can I cheat when I exist in the plural form hun? read the shirt, my pronoun is we”– nothing appears to be done without intention. 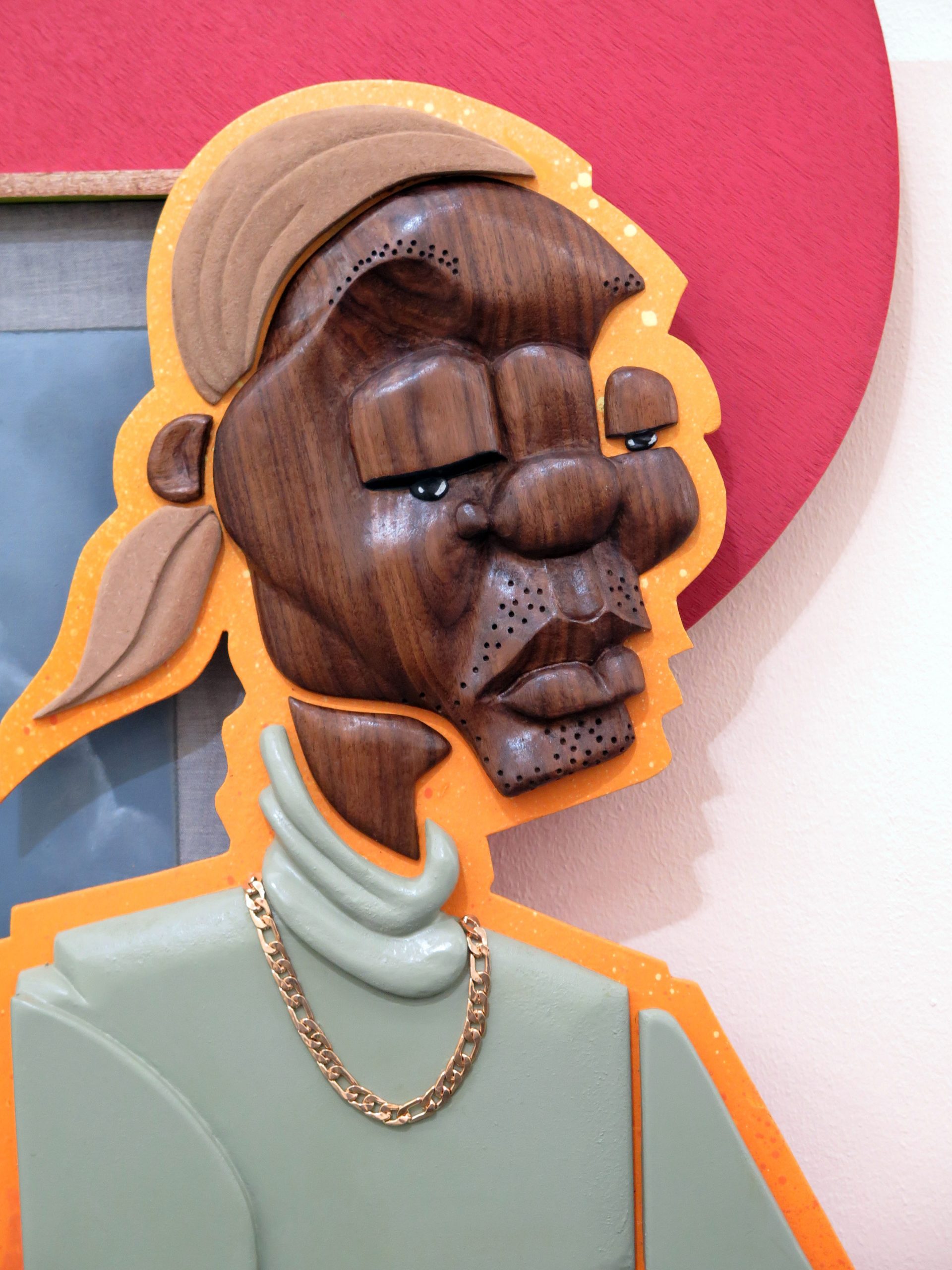 Are You Okay; detail.

In this age of a postulating wokeness- dankie dankie call out culture -how like coming home after an exhausting day Khanyisa’s dynamic social commentary or rather social observations in Good Feelings are, talking to you rather than at you. I think specifically of the pieces What a Prick and Group Chat. There is no attempt by Khanyisa to confine the works to a single story or suffocate them within the boundaries of a singular interpretation; feelings are individual as much as they are collective. Rather, what they do through a considered use of visual clues and symbols is allow the audience the room to pave their own way to meaning making. Speaking about the two pieces Khanyisa had this to say:

“It start off with this one, this composition of these 3 figures here shouting at this guy and it was in a sketch format so with this guy I wanted to show attitude someone whose so arrogant you can almost call him an asshole umm and I think that is drawn out in his hand gesture and the prickly plants… It’s all about seeing the clues… What this sparked is like almost like a chain- like an adaptable story. When you look at these people maybe you’ll think he cheated on one of them or maybe he cheated on one of their friends. Maybe they were chilling and they were in an argument and were like “okay well fuck you”. So there is that conversation and this was done maybe April (2019) and later in the year there were those internet lists and you know. So this particular moment reminds me of that time, that confrontation. And you know dudes were on the internet like “keep quite” or were just being silent. I think that became a moment that made me realise that there is a gap and unequal relationship between someone being confronted for their bullshit and them not wanting to change and people who are trying to educate, inform and talk about. That was the kind of thinking that was present on the internet around September 2019”. 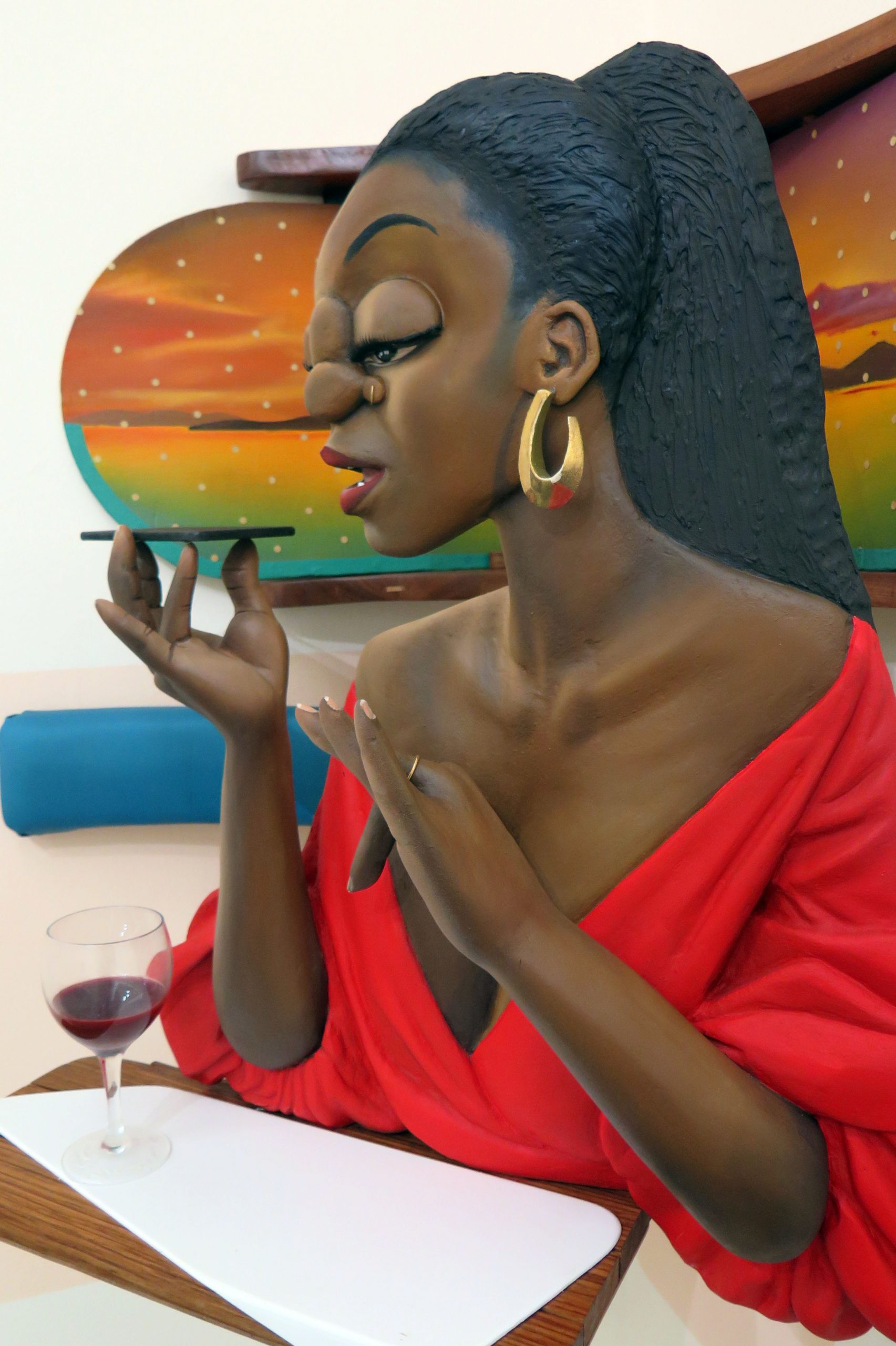 “The humour
The ingenuity
The technical ability
The commentary
That is Dada Khanyisa”,
reads an instagram story post by writer KNeo Mokgopa. The humour woven through and into the works makes itself manifest even in how Khanyisa themselves talks about their work, “anyway this is dedicated to all you instagram couples that sometimes overshare, most times overshare. Yeah because we don’t have to see your tongues touch”, they say talking about the piece Better than Groin Area Massages. Along with aspects in their work named by KNeo, uDada also fleshes out in their show, the dynamic influence of Black South African pop culture on their work and an intricate understanding of millennial voyeurism by virtue of social media.

“I mean we do exist on our phones, our virtual personalities are stronger than our real personalities. That’s where I gather most information, you know I don’t live in a community where you step out and walk into a taxi and you can hear about everyones life. Now you have to just scroll and click and see what people are doing on Friday night. Like that painting there exists in a virtual space”,

they proclaim still taking about Better than Groin Area Massages. Are You Okay is where the influence of Black South African pop culture is most pronounced with a slogan in the background of the work, encompassed within an angry tumble of grey clouds that reads “o grand joh?”. “This is a cultural mark, I think people are familiar with this phrase “o grand joh?” From iYizo Yizo when they flush that guys head in a toilet and uJavas is like “o grand joh?” and it was also used as Bomb Shelter Production’s like ah audio slogan”. 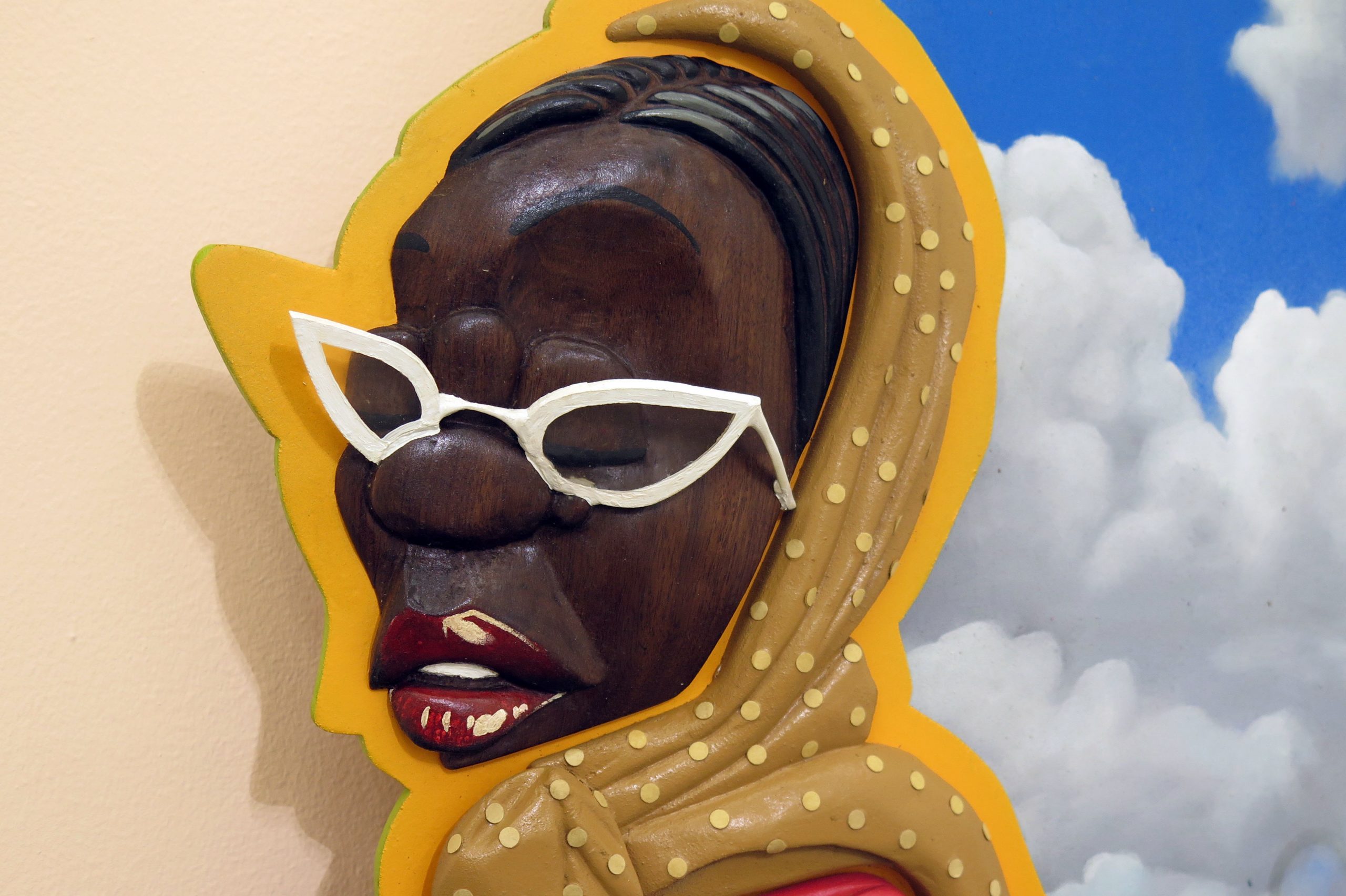 “Black joy is sacred because it’s earned. There’s no moment of Black joy, even if it’s taking place, say, in the body of a 6-month-old Black baby — that isn’t earned… And when that joy takes place, it is a resistance. It is a resistance against the narrative that usually defines us.” (Pastor Delonte Ghalston). This resistive joy; singular and communal, the shape of our lives as lived in the now now time and as curated on social media, the contradictions of the Black middle class aka amaBlack Diamond Butterfly, hoteps, slay queens, abo’sisi amatownhouse, South African art historical references and re-contextualised global art historical references– all come together in a Jabba like summer time jam with Dada Khanyisa’s Good Feelings. This is life-meeting-contradictions-meeting-meaning-making-meeting-artistic-ingenuity, and self aware social observation. This is so oh important and damn does it feel good. 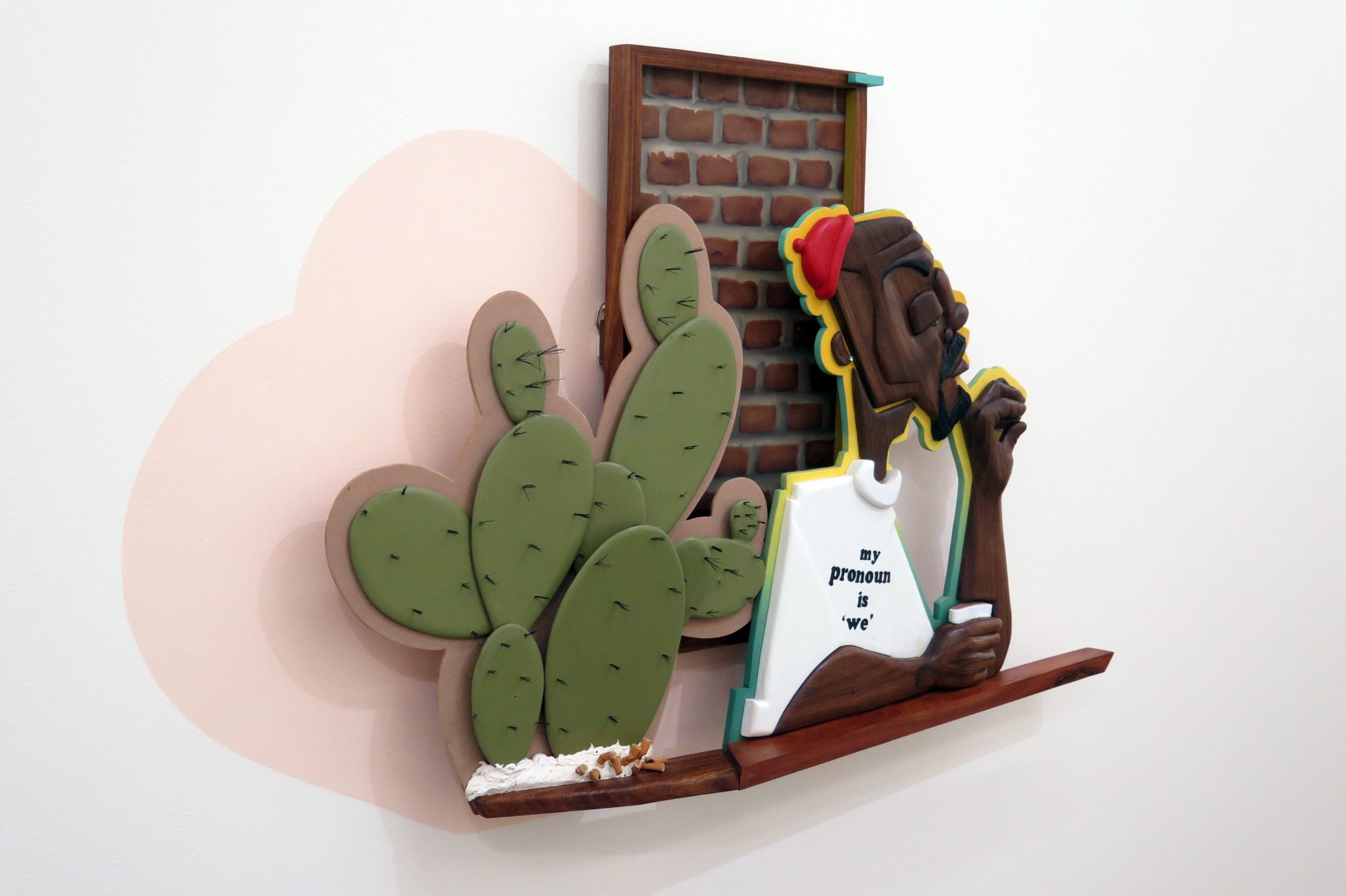 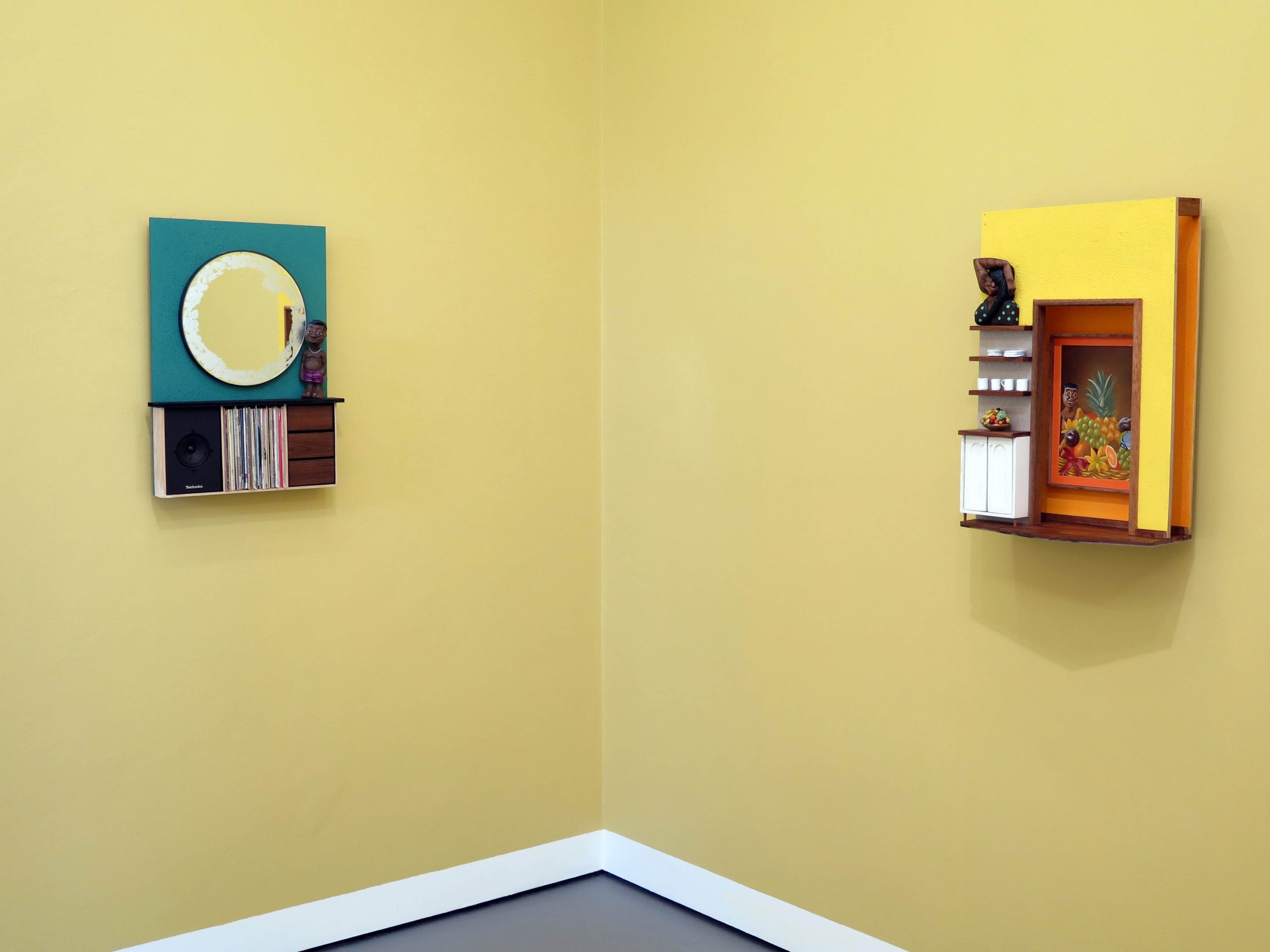