With African cultural exports like music, film and visual art rightfully taking space in global conversations about culture and the arts, there has been a boom of young visual artists from the continent and its diaspora experiencing well-deserved global acclaim.

The young pharmacist in training and wonderfully talented mixed media contemporealist – Johnson Eziefula – is one such artist that I am personally thankful for.

His figurative works depict ordinary African people in extraordinary ways, with the use of abstractions, colours and textural disruptions that tell the stories of people, culture and cultural exchange. 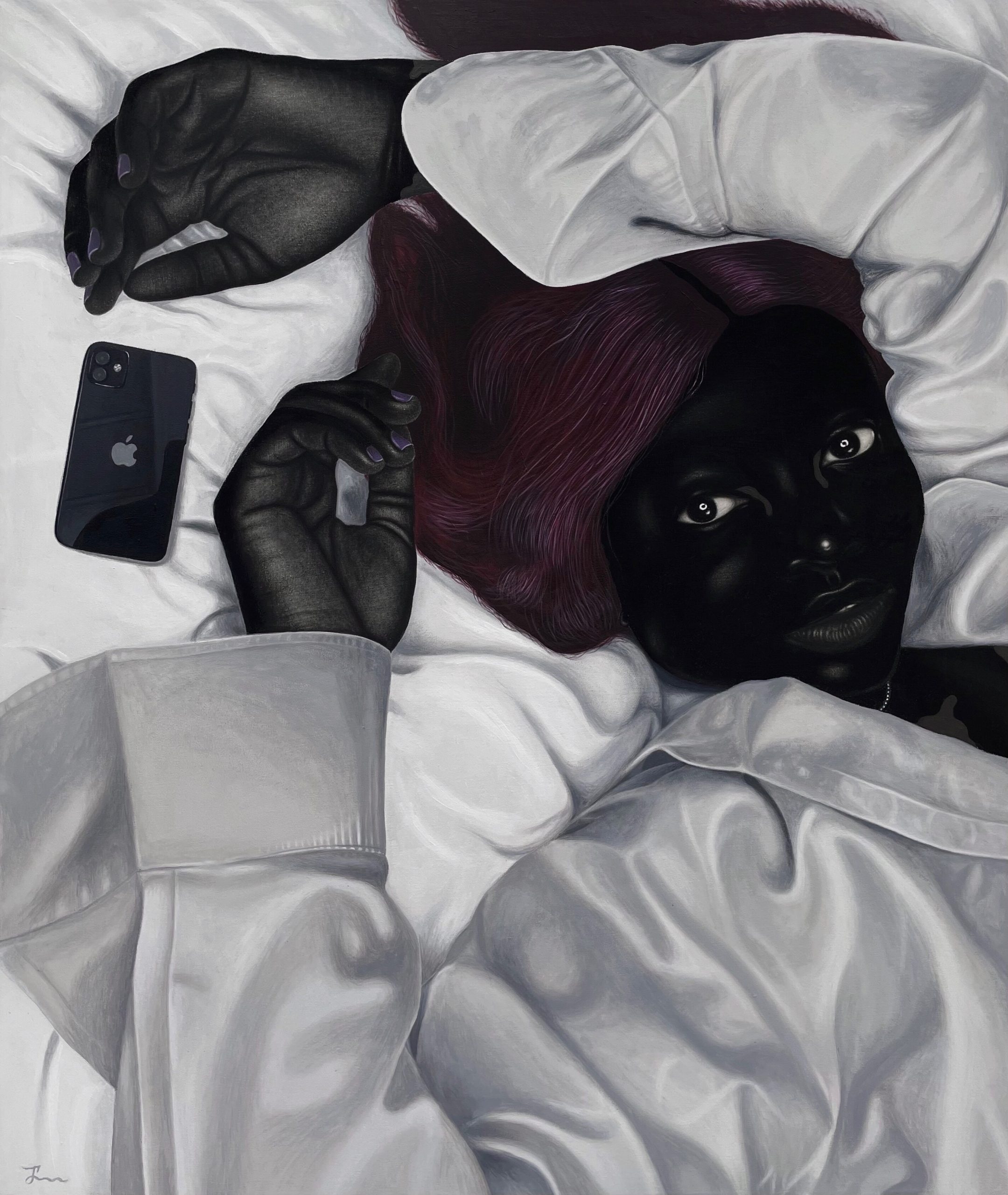 Johnson Eziefula has stated that he uses art for his “sanity, to make an impact, to add value, to truly live”. In a conversation with David Olanipekun – for his Let’s Talk Creatives series – this is exceedingly clear.

Johnson revealed that his works function as mutual therapy for himself – to query ideas and interrogate perspectives – for the people within the works and for the broader communities that they represent. In this way, he explores where his experiences of people and their lives intersect with other lives and the human experience in general.

This allows him to inspect and reveal certain things about himself and the world he shares in, creating avenues for his own self-awareness. 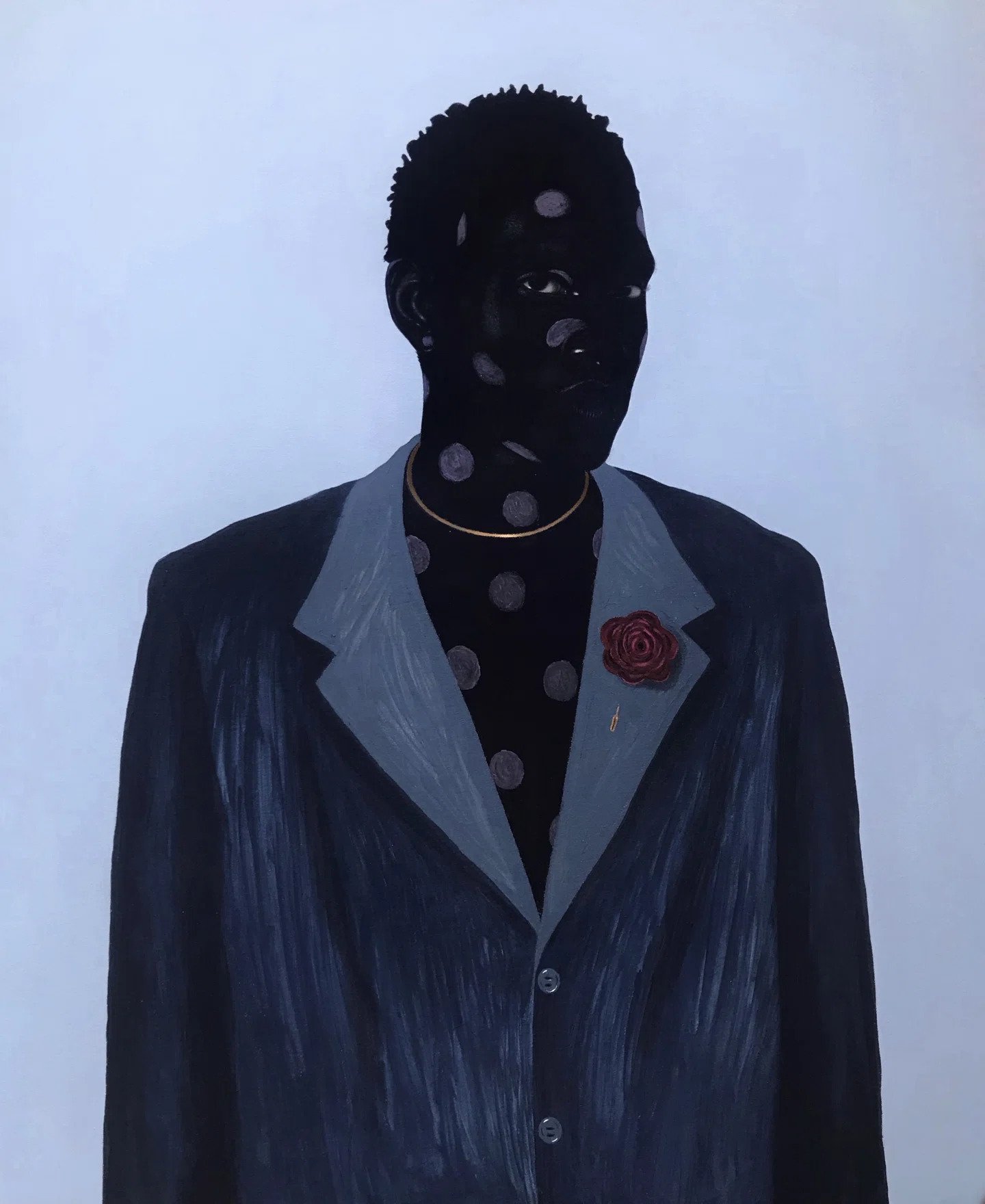 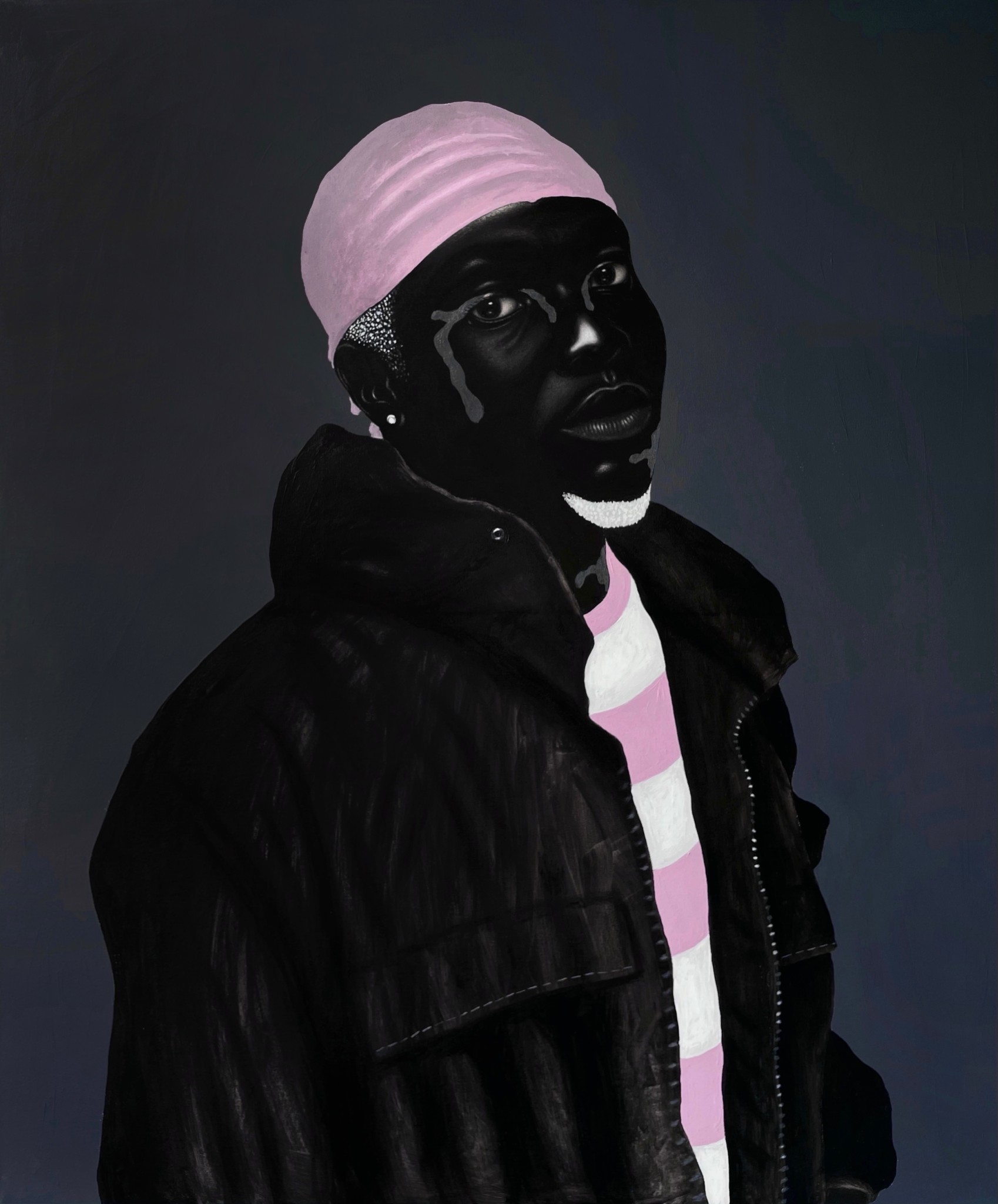 To It’s Nice That, Johnson explains that he finds his “major inspiration as an artist in a mix of [his] environment and its components.” He further delves into the idea of cultural exchange, through exploring the concept of cultural hybridisation in his work.

He observes African people – friends, family and people around him – casually engaging with Western cultural imports as part of their own daily practices and hum-drums. This idea that imported cultural elements can intermingle with and be adopted by a person from a distant culture or region – to become part of their own personal identity – seems to fascinate Johnson.

In the piece – Entirety Interrupted III, 2020 – a hyperrealistic portrait of an African woman face is interrupted by a piece of Ankara textile – a Dutch import into the continent that became interwoven with and inseparable from broader African culture. Johnson says “we are all cultural hybrids”, a culmination of each other and our experiences of life and society.

What captivates me most is his ability to capture the essence of personhood even beyond culture, race and regionality. With visually striking pieces such as Banke & The Portal, 2021 and French Man, 2021, that draw in viewers to question the emotions in the eyes of the subjects, to fall into the sullen mystery hidden behind soft smiles and still bodies, and to question how person featured relates to their blackness and to their atmospheres – Westernised or not ­– it is endlessly enrapturing how I still feel like I am confronted with, and only with, a person. 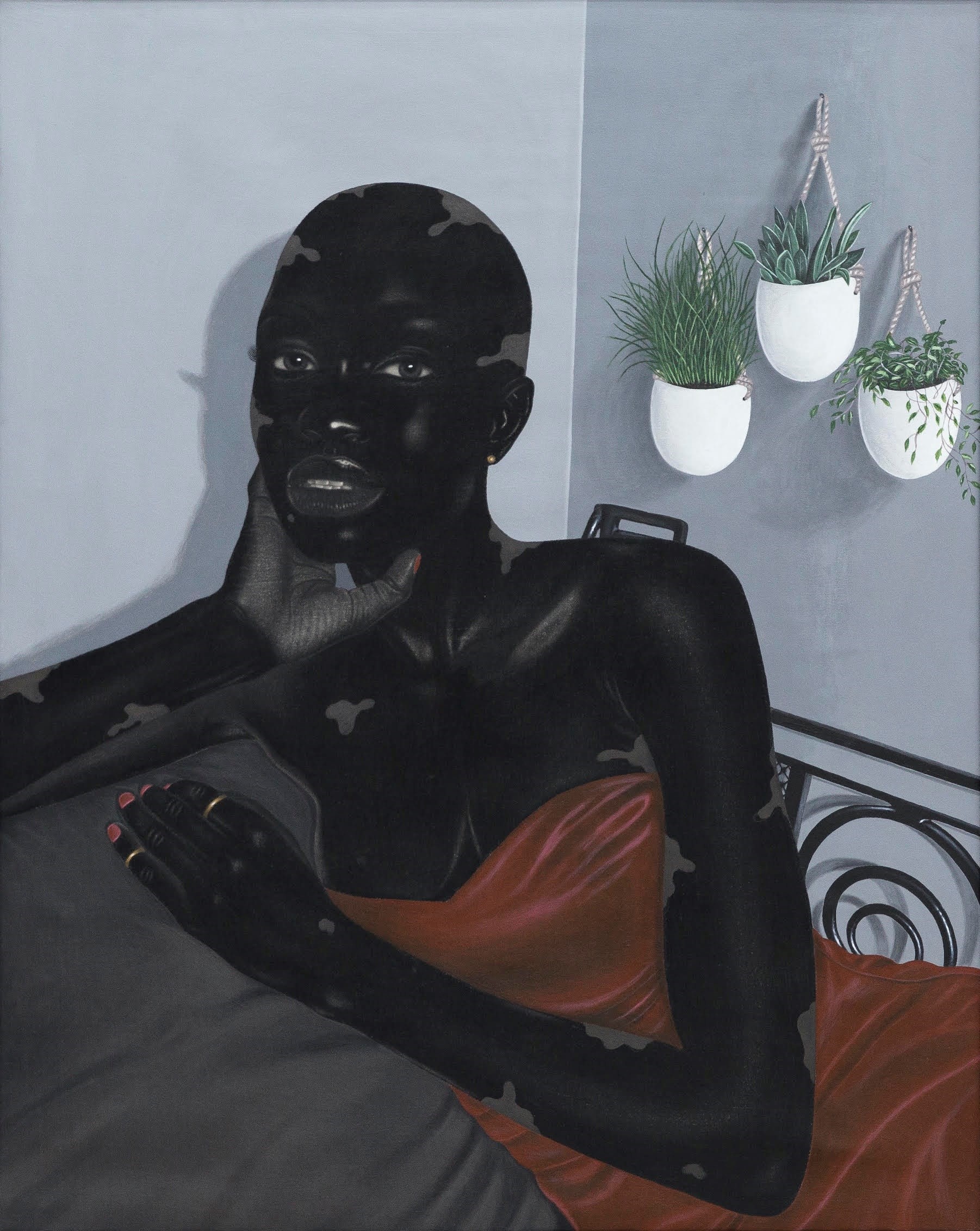 Now more than ever, in a world that seems hell bent on the commodification of black bodies and on the co-opting of indicatively black figures and symbols, seeing works like Johnson’s, truly feels like a breath of fresh air.

In deep black skin, that almost seems to heighten the black form or even act as a symbol of blackness, the subjects still feel human, as opposed to symbols and representative icons. Their stories intrigue us past the layer of dark acrylic paint and smooth strokes of charcoal. The sense that we are faced with a person and not an idea is inescapable and certain.

I see myself in the subjects, almost as much as I do not. I relate to them as humans, like me. As people, with lives that might be ceaselessly interesting or soothingly dry, and I so appreciate the simplicity of facing a work of art that features blackness but centres personhood over clumsy ideas that seek to make black bodies symbols for struggles, fights and other what-have-yous. 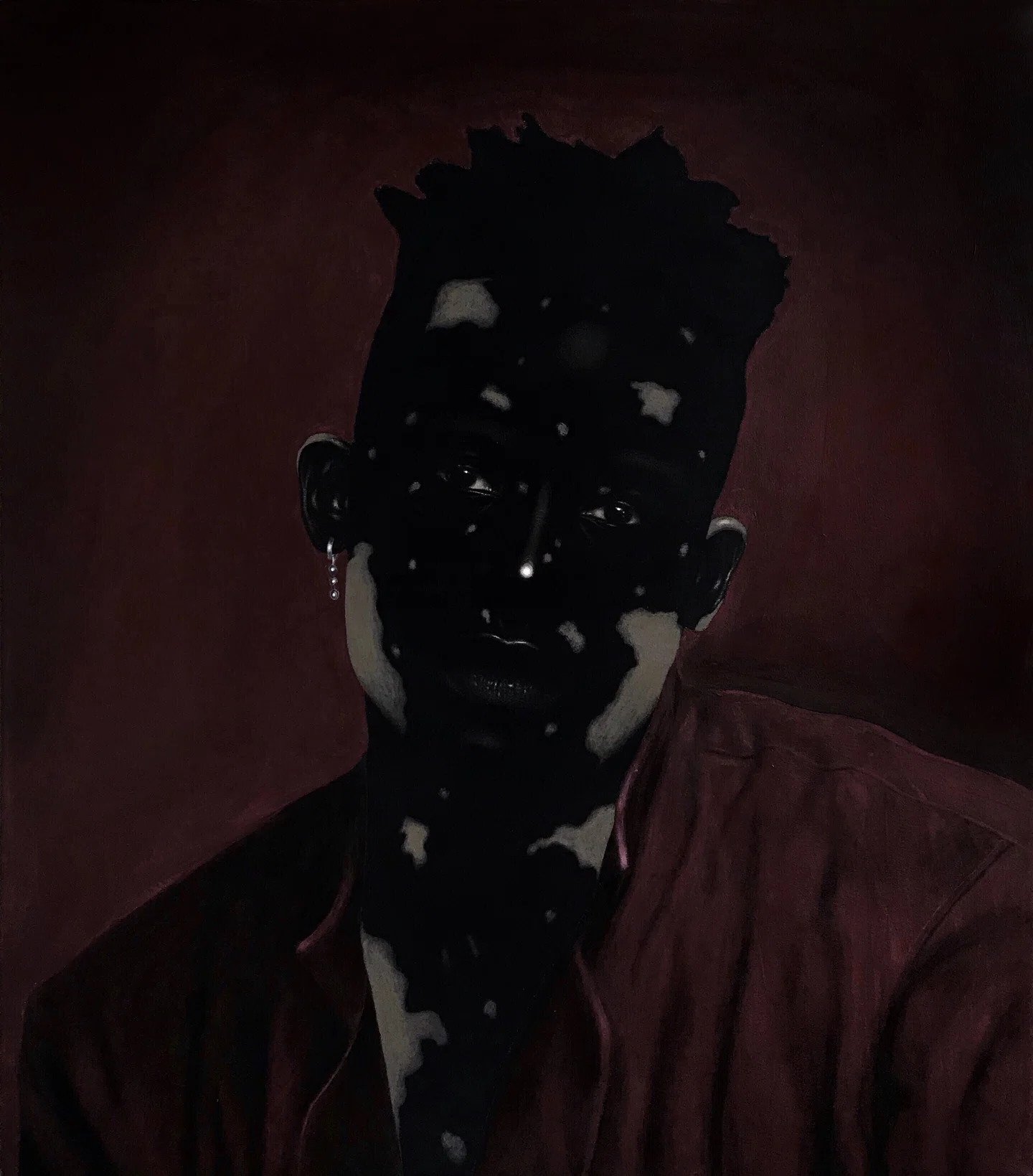 Past his growing international acclaim, Johnson Eziefula has spoken specifically about making art accessible for the people of Africa and Nigeria. He specifically cites the youth as the next frontier to build a sustainable local art economy.

African music spreads its influence and sound around the world and within its bounds, but there seems to be a strange phenomenon where African art is only enjoyed by small niche communities in the continent and then exported over the continent’s borders to enjoy mass acclaim in art communities in foreign landscapes. Johnson sees that a relationship between music and art could bridge the gap of local understanding of art to ensure that artists enjoy successes in their home spaces.

Music and art seem to be in direct relationship and interaction for Johnson, who has stated that a good day’s work features “Painting, painting, painting, in the presence of great music”. This is just my prediction, or perhaps even hope, but I see Johnson exploring more of this connection in future work and projects. 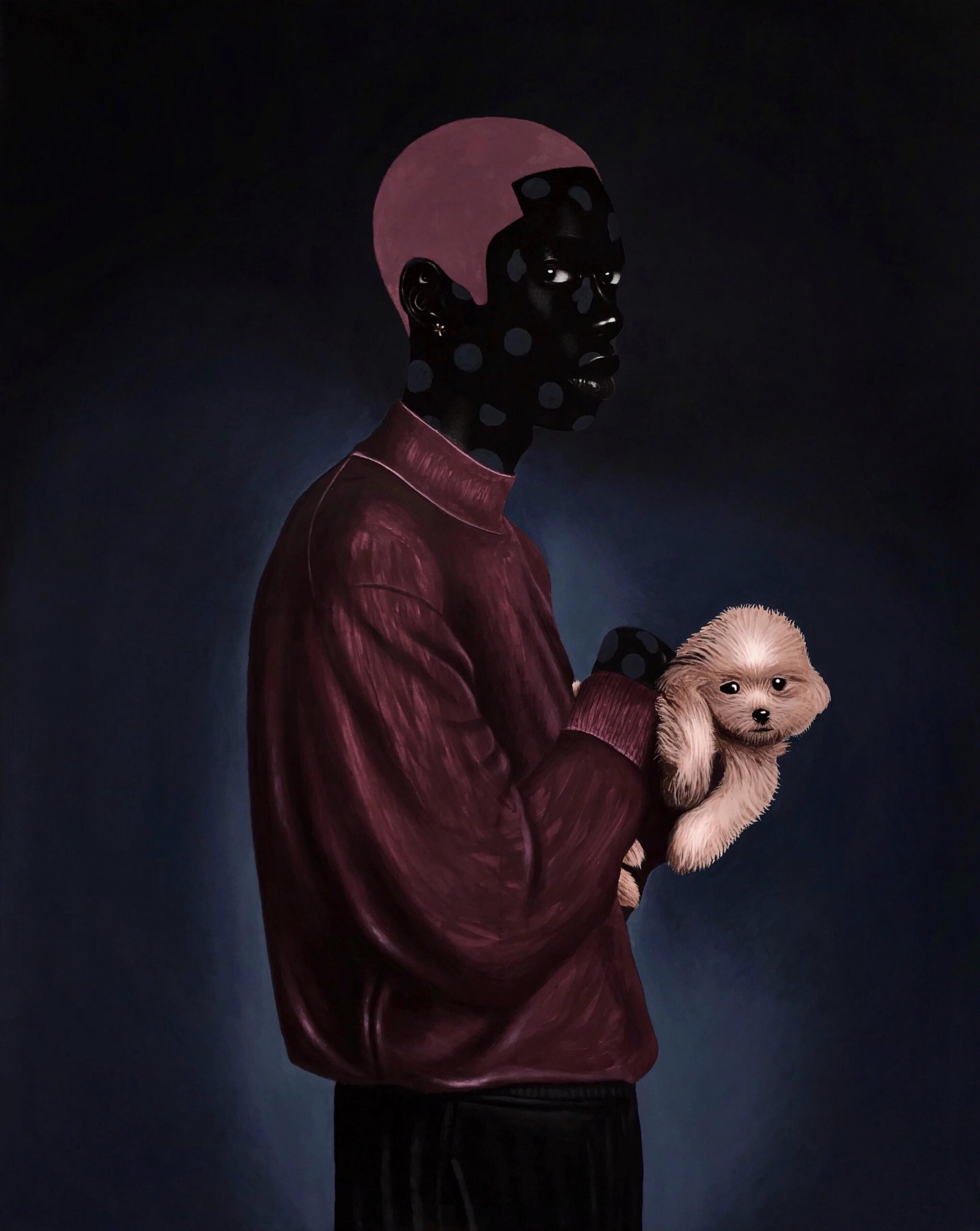 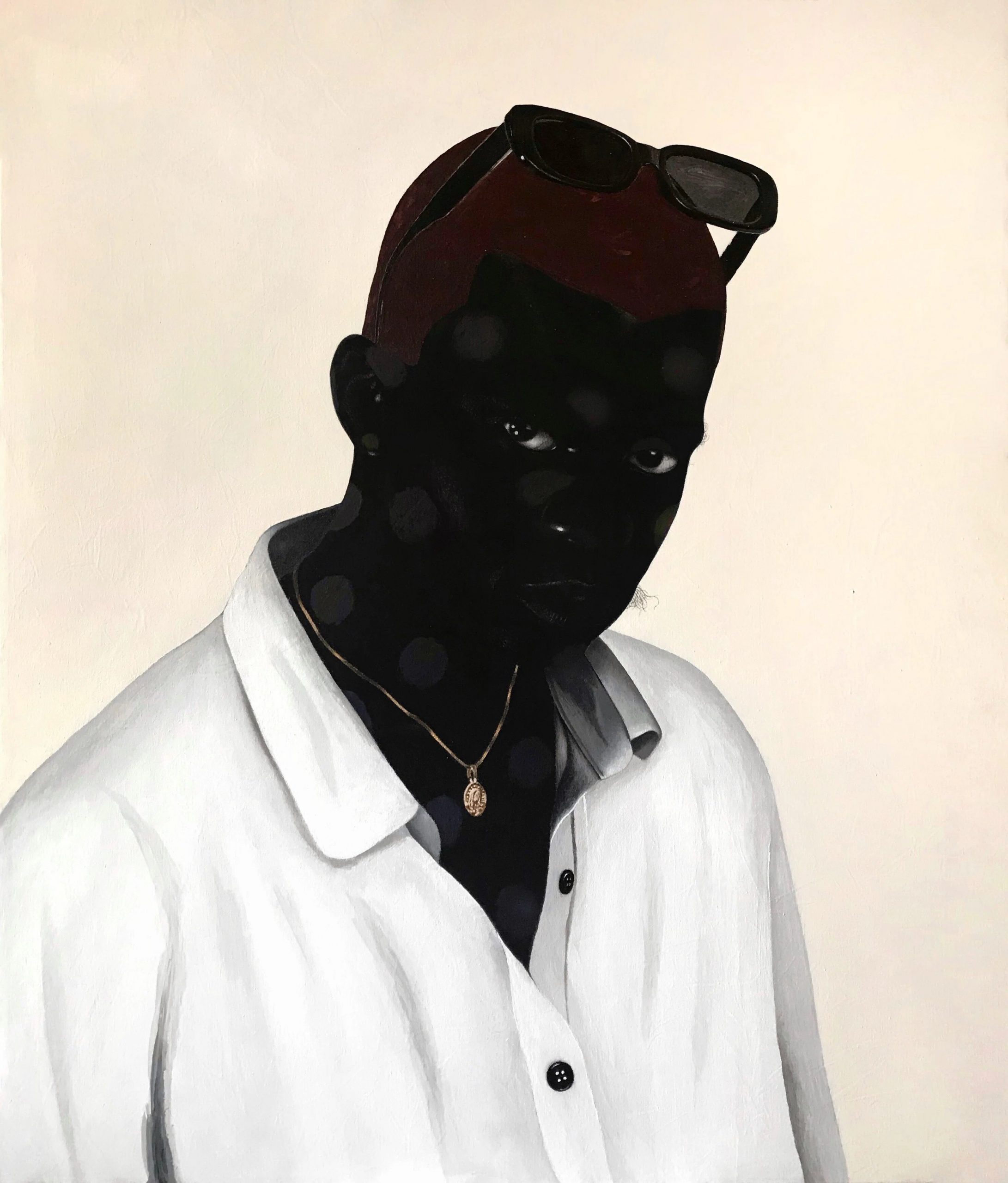 The art Johnson creates is of black people and Africans, and I get the sense that he feels it should thus be enjoyed by them first before anything else. In the aforementioned interview with David Olanipekun, he mentions that he prefers that his art be in galleries where people can engage and interact with work, over being sold for the enjoyment of one buyer.

Once I heard him relay this sentiment, it all clicked. Why I felt I was dealing with people when looking at his work and not viewing art per se. Johnson Eziefula uses his talents to create works with lives of their own, that you and I can relate to, just as people.

He is currently exhibiting online at the ArtxLagos Art Fair, until the 21st of November.

You can view his exhibition here. 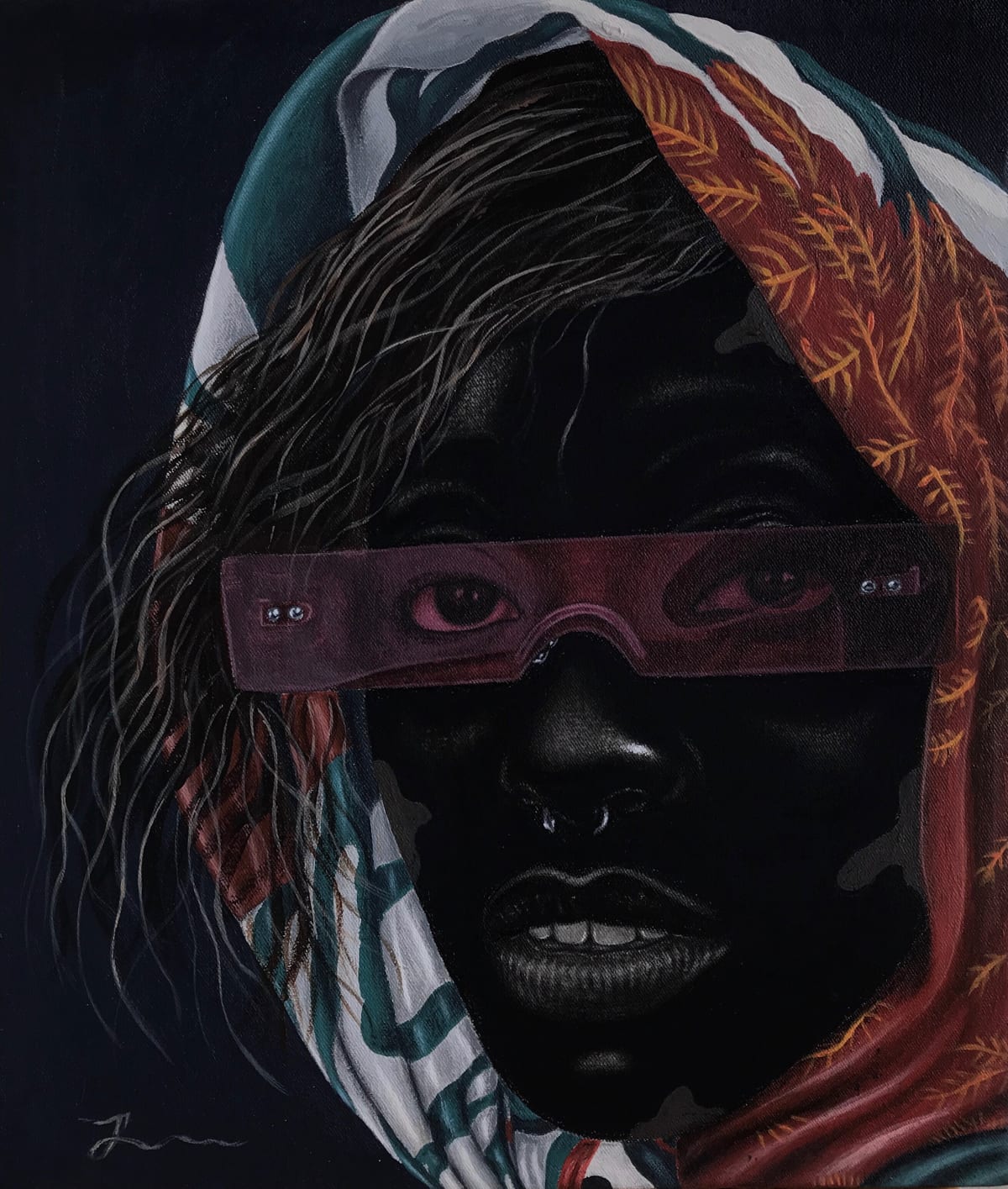