Mia Darling’s work invokes child-like fantasy with cohesive motifs of flowers, butterflies and cherubs in and amongst backdrops of intimate spaces such as bedrooms and boudoirs. Unusually so, she employs plasticine to cement these innocent ideals in swirls of pastel shades, and the detail with which Mia executes a likeness in her pieces is impressive; her format daring as she moulds images with her paintbrush hands. Whenever I think of Mia as an artist—in both her work and expression of self—I am drawn towards reminiscing over the Virgin Suicides (and perhaps anything by Sofia Coppola), Chloë Sevigny in ruffled lace necklines and silk fabrics. All these fabrics draped as material signals and philosophical echoes of romanticism born from renaissance paintings expanding to the last century of femme expression. I think of The Birth of Venus – the personified deity of Love emerging from a scalloped shell by Botticelli. According to Plato, Venus was both an earthly goddess awakening sexuality in human beings – while also embodying a heavenly goddess whom stirred intellectual love within human beings. It is this parallel of femme energies that bridge the worlds of the seen and unseen and Mia’s work a possibility of exploration into the playfulness of this dance of forms. 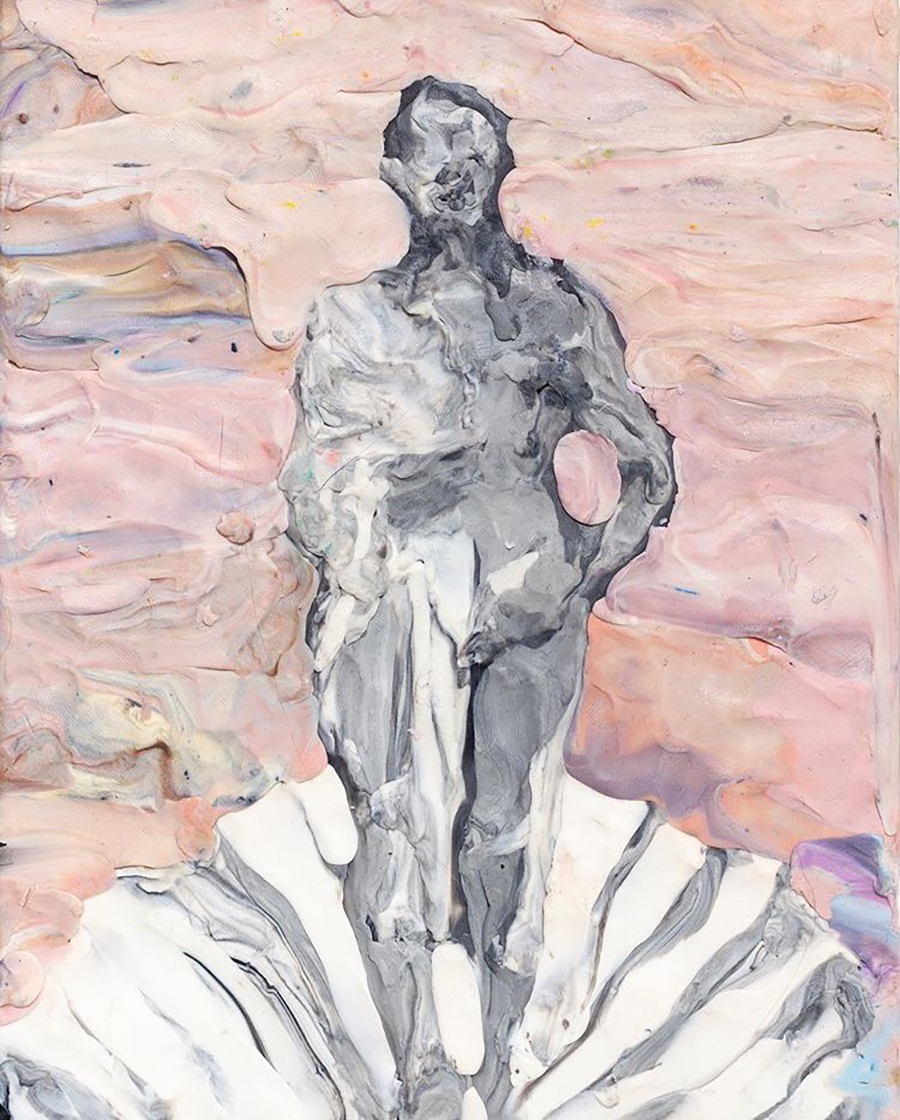 What was your first experience working with plasticine and how does the act of working directly with your hands inform the process?

Plasticine was a part of my childhood, and it’s a mode of playing and exploring texture and colour. I had a project in third year at Michaelis focused on materiality – we were asked to paint without using any traditional paints. I had a lot of plasticine left over from a previous project for stop frame animations. At first, I intended to expand on the project using silicone against glass while using plasticine in a more three dimensional [and] structural way. I noticed how the form changed on the back and the front of the glass, and from there I felt that I had found my own unique interpretation of painting. Working with my hands really allowed me to blend colours beyond the primary colours I had initially used, especially combined with the heat of my hands; it really feels like I am engaging with the painting process. I am directly activating the plasticine with my hands, communing with the colours I want to create and bringing forth a piece of work. It has become this soothing mixture between painting and sculpting; where I am inviting more of myself to participate in the process.

You explore dreamy motifs such as cherubs and flowers among other things, how has this signature of romanticism grown in your work?

I love kitsch, over the top femininity and romanticism – I think for me it links quite heavily to fantasy and escapism [as-well as] this child-like idea of what romance and sexuality mean. I chose to incorporate the motifs and nudity from traditional Western oil paintings as a references, while using plasticine to break the boundary beyond classical mediums such as oils. I am playing with the idea of what paint is; provoking a new way to interpret and explore these themes but within a brighter [and] more childlike plasticine world. Most of the work I reference is a re-interpretation of the male gaze as most of the classical painters were men. [My work] turns these motifs around and shows the essence of fantasy within my own exploration of body image and femininity. I think now I have found my own set of symbols and perspective, and am now exploring my own view of the world while still playing around with referencing the old guard.

A sense of humour is intrinsic to my work – I think it’s really necessary especially within the context of the old white male painters from the classical era, who are taught in Art History to be the pinnacle of artistic development and skill. I like to poke fun at that notion while using a medium of plasticine which is cheap and accessible in a way that most mediums are not. It also never dries due to the glycerine in it; which feels daring. The malleable nature of plasticine creates this sense of ever-changing possibility. 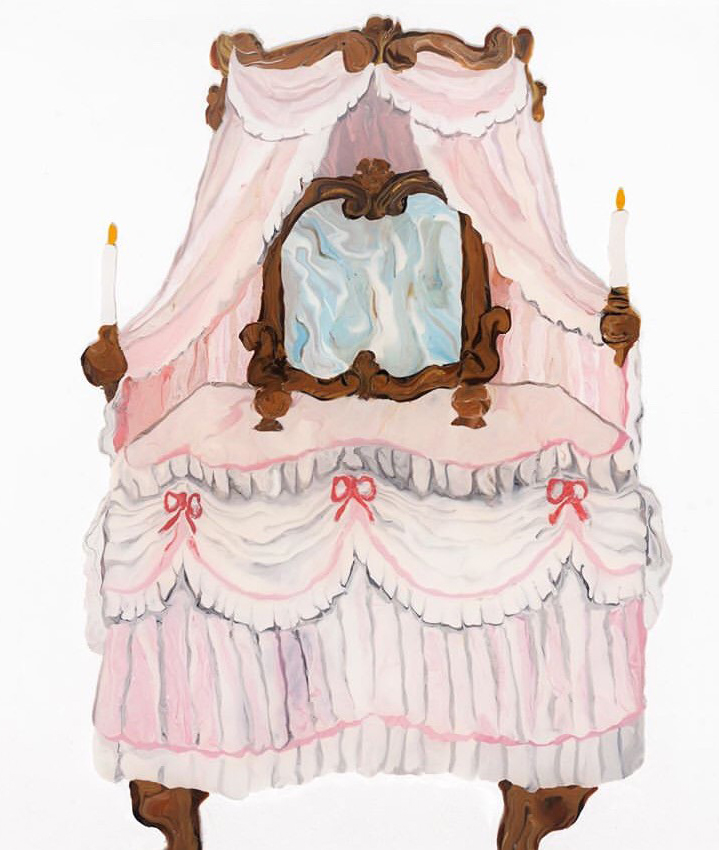 What does the colour pink represent to you in your work?

I feel like the themes and motifs that I explore require pink to add that true sense of playfulness that I want to convey in my work. Pink—in its varying shades—is present in skin and flesh, yet also speaks of fantasy. It’s a vulnerable and tender colour, which I use to invoke intimacy. It can also be an incredibly divisive colour especially during childhood – it provokes stereotypes around our entrenched binary ideas of femininity. I did not want to be seen as the “girly girl” when I was young but always secretly revered it as a colour.

Has the global pandemic impacted your work as an artist?

I was quite lucky in that a lot of the places I source plasticine from were still open during the lockdown and Perspex was seen as an essential item, so I could carry on working during this time. I think this time has brought on a lot of fatigue and exhaustion for us all, and the small daily stresses build up over time – which personally has impacted my sense of creativity. I might explore more themes of loneliness and isolation in my work going forward as a result of these socially distant and emotionally demanding times.

Can you comment on your vision for the visual arts landscape in South Africa?

I would like to see a greater accessibility for artists especially online – moving beyond the traditional route of being represented by a gallery. I hope for a shift of power from the gallery spaces and into the actual hands of the artists and creatives, who can then deal directly with potential buyers. I think there has to be a sort of “ego-death” for the gallery space and owners, and I wonder if we really need the intermediary of galleries to govern the process of selling ones work? A change has been needed for a long time in terms of how creative work is seen and consumed, and we have seen how crucial an online presence has become in terms of showcasing one’s work and I hope to see the expansion of this. 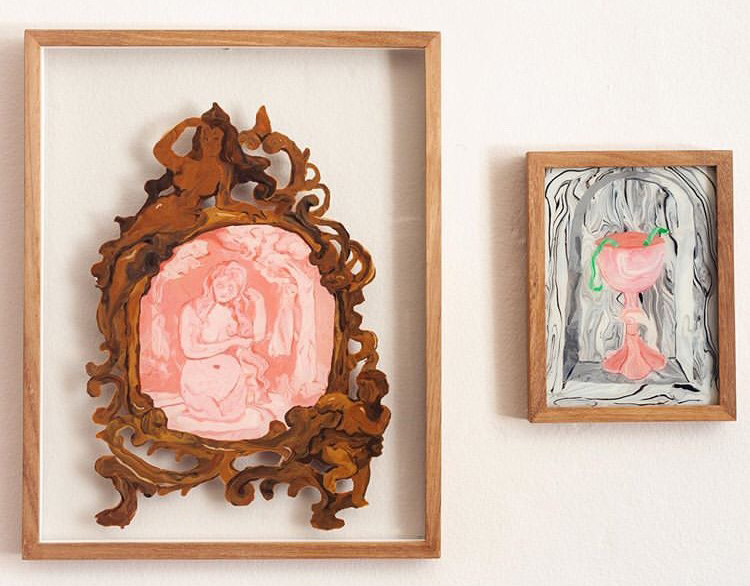