Why don’t you pretend you hate capitalism and I’ll pretend I care about social justice? - Bubblegum Club

Somewhere in my mind lies a long list of things that seem improbable, or at least at some point seemed improbable. On that list is the idea that my world view would so firmly be guided by a sceptical attitude—eyes are peeled and everything is weighed and scrutinised. To be fair, the conditions of existing in the modern-day age are such that critical observation and watchfulness are necessary. This is why the term “stay woke” as an expression gained popularity among social justice activists a few years back, calling upon us not only to wake up but also suggesting continuousness of consciousness. But, I’m also thinking about scepticism as it relates to doubt. That doubt can, in fact, be a good place to begin—whether that’s producing a new painting, putting together a new song or writing the great African novel. Doubt generates questions and questioning, which I believe is useful. 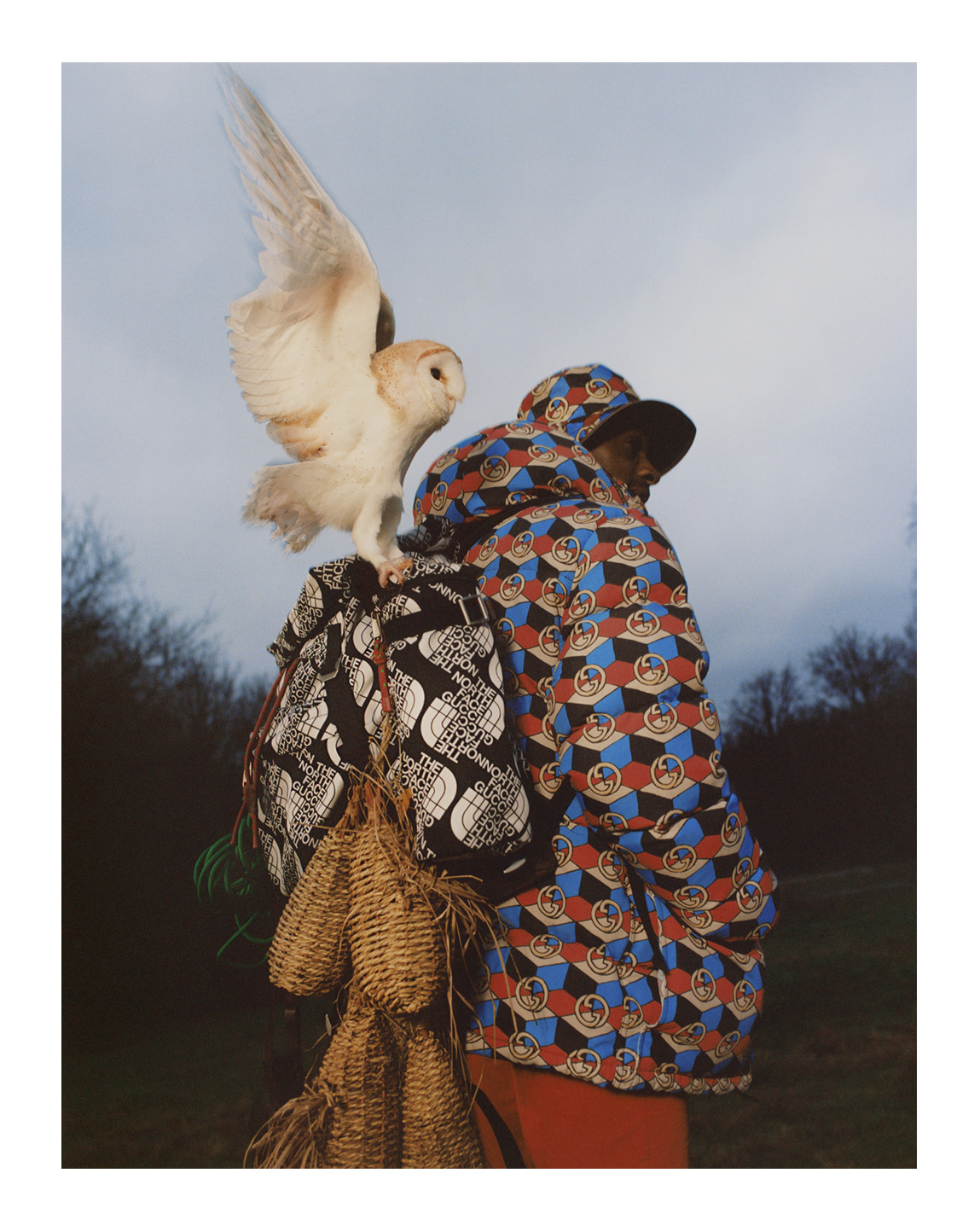 At this moment my scepticism is directed towards Gucci (humour me for a sec), in particular Gucci and its many many collaborations. Of course, the term ‘collaboration’ and its associated discourse and entanglement with power and control elicit a raised eyebrow—when is it a collaboration (as opposed to someone paying you to do something?) Who gets to collaborate and on what terms? Here, I’m not interested in drawing a hard line between collaboration and other forms of partnerships or working relationships, I’m more interested in tracing power and its impact on these relationships. Speaking on the philosophy of collaboration, writer and founding editor of Chimurenga magazine, Ntone Edjabe notes:

We simultaneously work with and contest the power of international and national cultural agencies….They all seem trapped in a logic of development when engaging with cultural producers on the continent—essentially their mission [being] to help us be more like them, while also extracting resources. Whether it comes with bread, a gun, or the bible, it’s the same old colonial mission. If one party is desperate, it is not a collaboration. It means the relationship is fundamentally unequal. 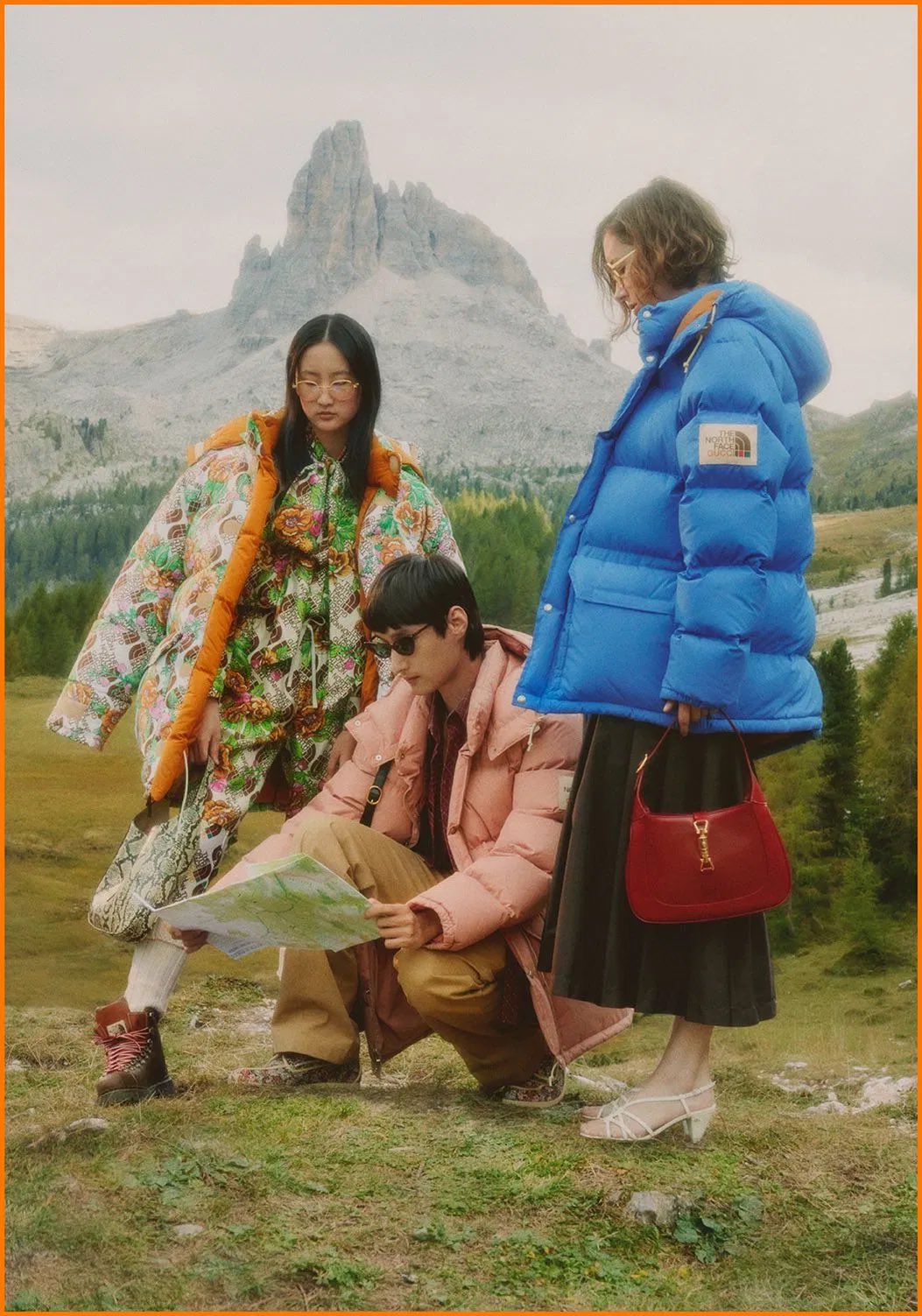 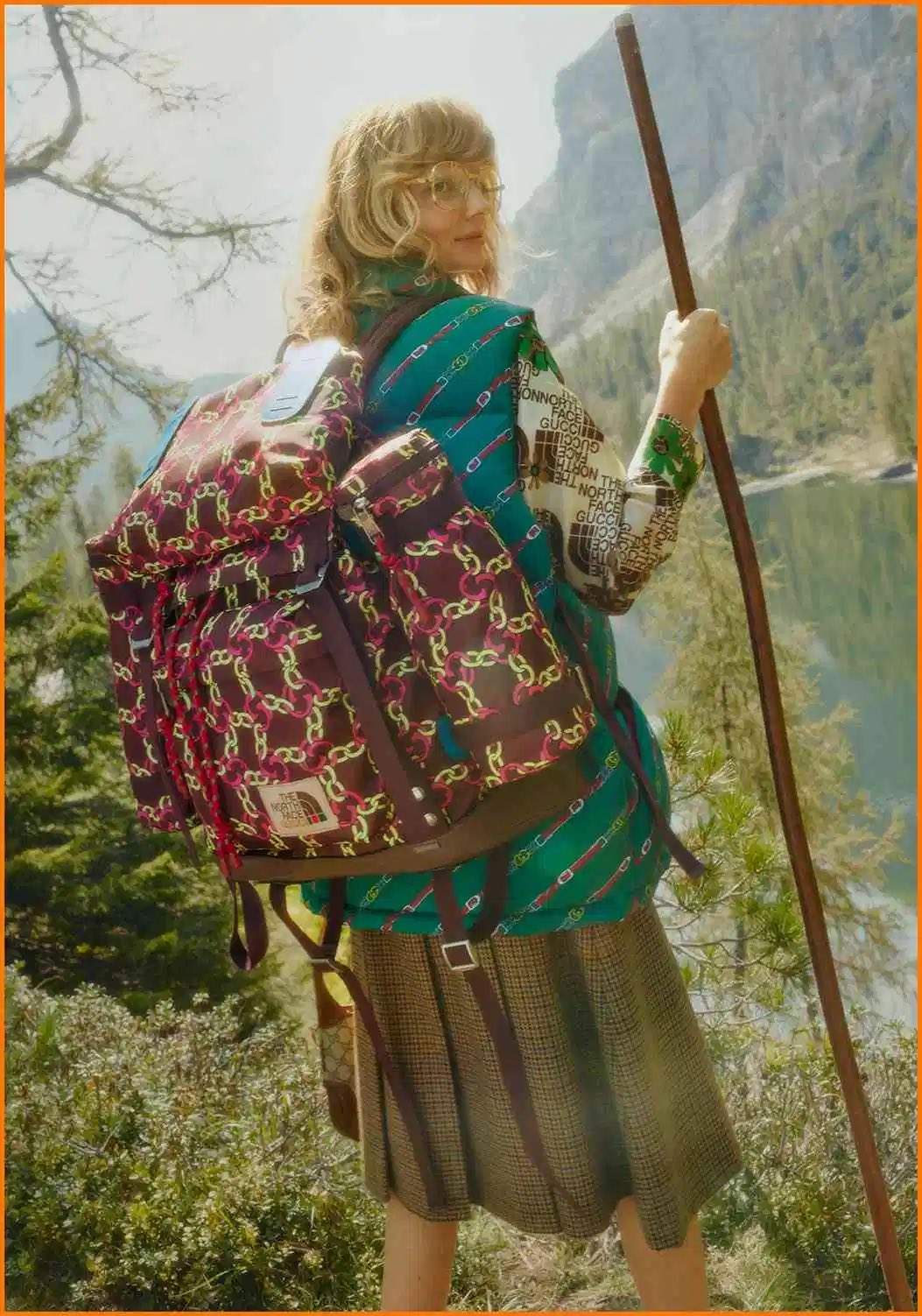 Now back to Gucci. By now, we’ve all seen the slightly-absurd-but-kind-of-genius collaboration between the American outdoor clothing company The North Face and Gucci. The partnership is said to be “a celebration of the spirit of discovery, exploring deeper parallels between the two brands in equipping those who seek adventure through challenging the status quo and a quest for self-expression.” It’s the impracticability that’s attractive and exciting for me—a group of models looking at a map on a hiking trail, two of them wearing heels and holding handbags. It’s this kind of unworkability of the framed moment that inspires some sense of delight in me. On the back of this project, Gucci (through its sustainability platform Gucci Equilibrium) introduced a series of collaborations with three thinkers and makers—visual researcher and artist Theophilus Imani, curator of a black history of art Alayo Akinkugbe and founder of blackarchives, Renata Cherlise. These collaborations come at a critical moment of reckoning with the representation of the Black figure in art. Imani, Akinkugbe and Cherlise’s work in this field is important and deserves space, consideration and engagement. And yes the argument is that with this reach, Gucci is broadening their scope and allowing the conversation to resound farther. However, there is also a point to be made for the dominant culture’s insatiable hunger for what is “trendy”, “edgy” and relevant. 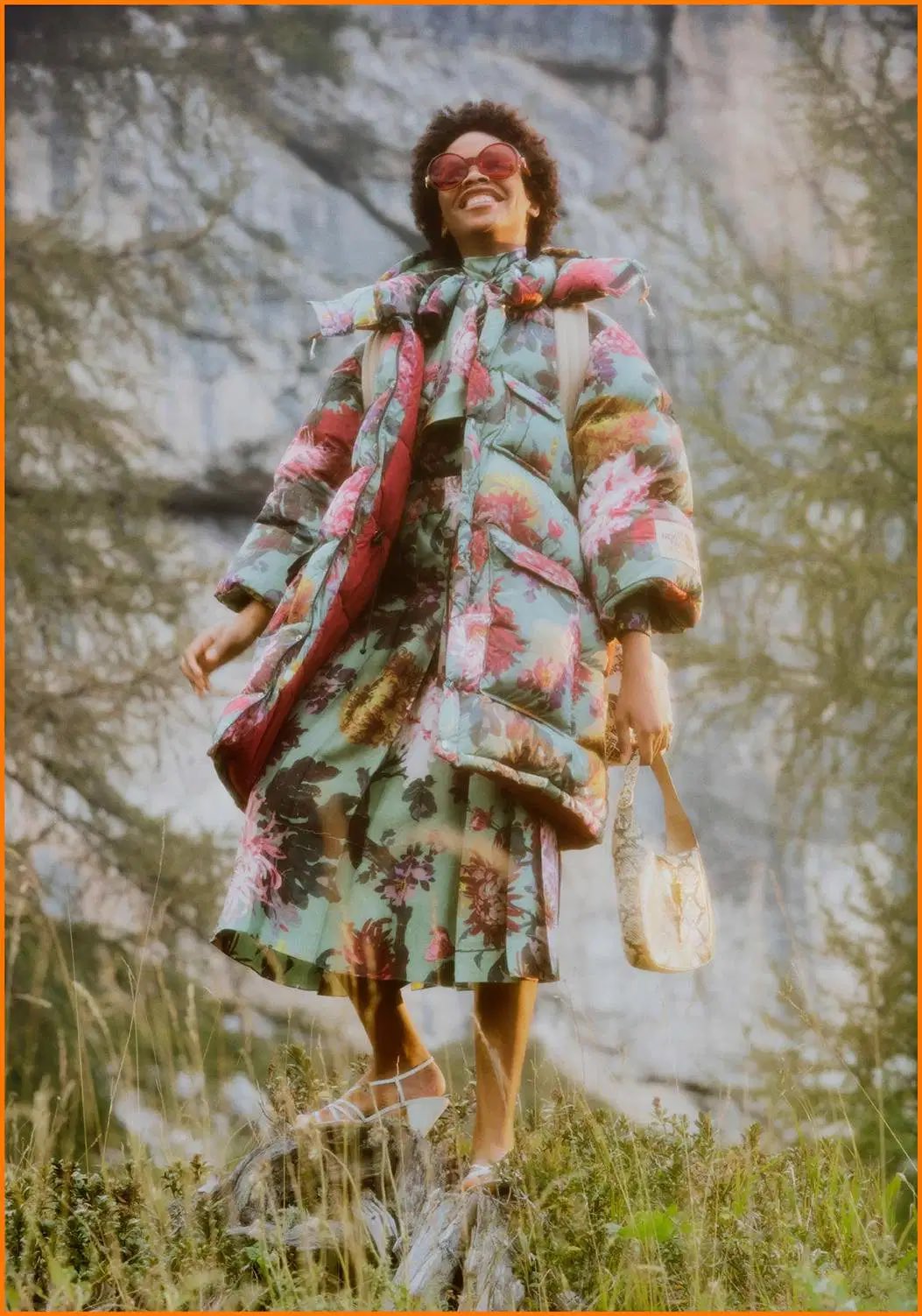 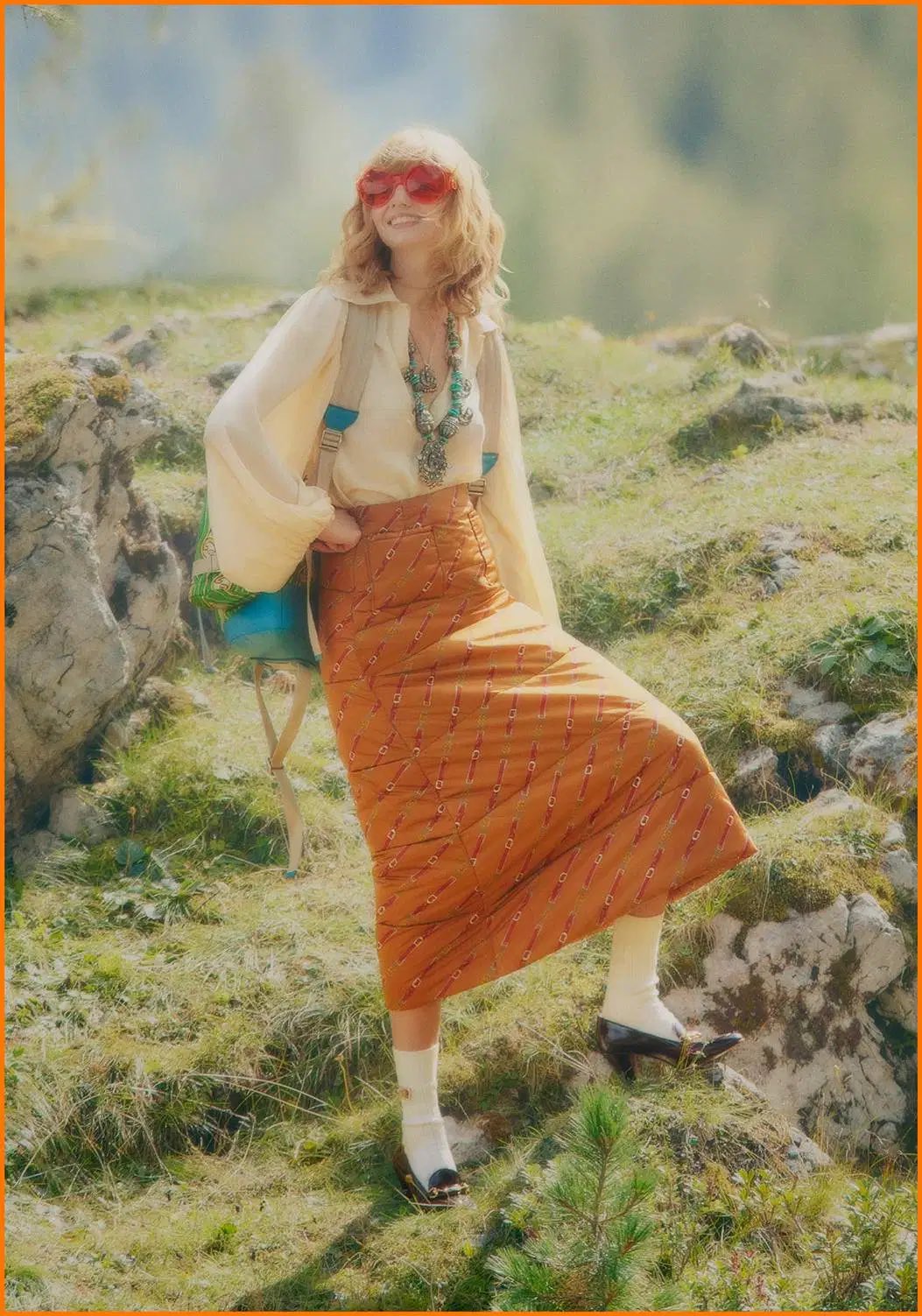 Dominant culture is everywhere and the only way to subvert it is to keep moving because once you stop moving it draws you in and co-opts your narrative (again, a very sceptical view but also not completely unfounded). Questioning collaborations that occur between parties where the relationship is fundamentally unequal is a worthwhile exercise, provided it is done with a level of criticality and sensitivity towards complexity. The title of this text—Why don’t you pretend you hate capitalism and I’ll pretend I care about social justice?— is lifted from the TV series Industry (2020). Set in Britain, Industry dramatises the ins and outs of the investment banking world through the story of a group of newly graduated adults competing for permanent positions in London’s Pierpoint & Co. It is filled with complications and entanglements in relation to class, gender and race. As is typical of boozy late nights where everyone instantly becomes ethical and woke, Greg Grayson (a  white character) points out his belief that social justice programmes are merely a branding exercise for multinational companies such as Nike, where we the consumers “can pretend that we hate capitalism” (while enjoying its benefits) in return for “Nike pretending to care about Black people”. To this, Harper Stern (one of the few Black characters in the series) responds; ‘I actually wrote a 4000 word essay on the moral case for capitalism’.

This encounter is tense, awkward and difficult but it also filled with agency and complication. But so are these questions about Gucci championing the Black image—side story; Gucci is the same company that stole from and harassed designer and legend, Dapper Dan, for years, later “collaborating” with him. It would be easy to be reductive and buy into the narrative that big business pretends to care about social justice, however, it would also be easy to think that Gucci is doing the lord’s work. The truth or perhaps the more correct word is reality, lies somewhere between these doubts and questions. 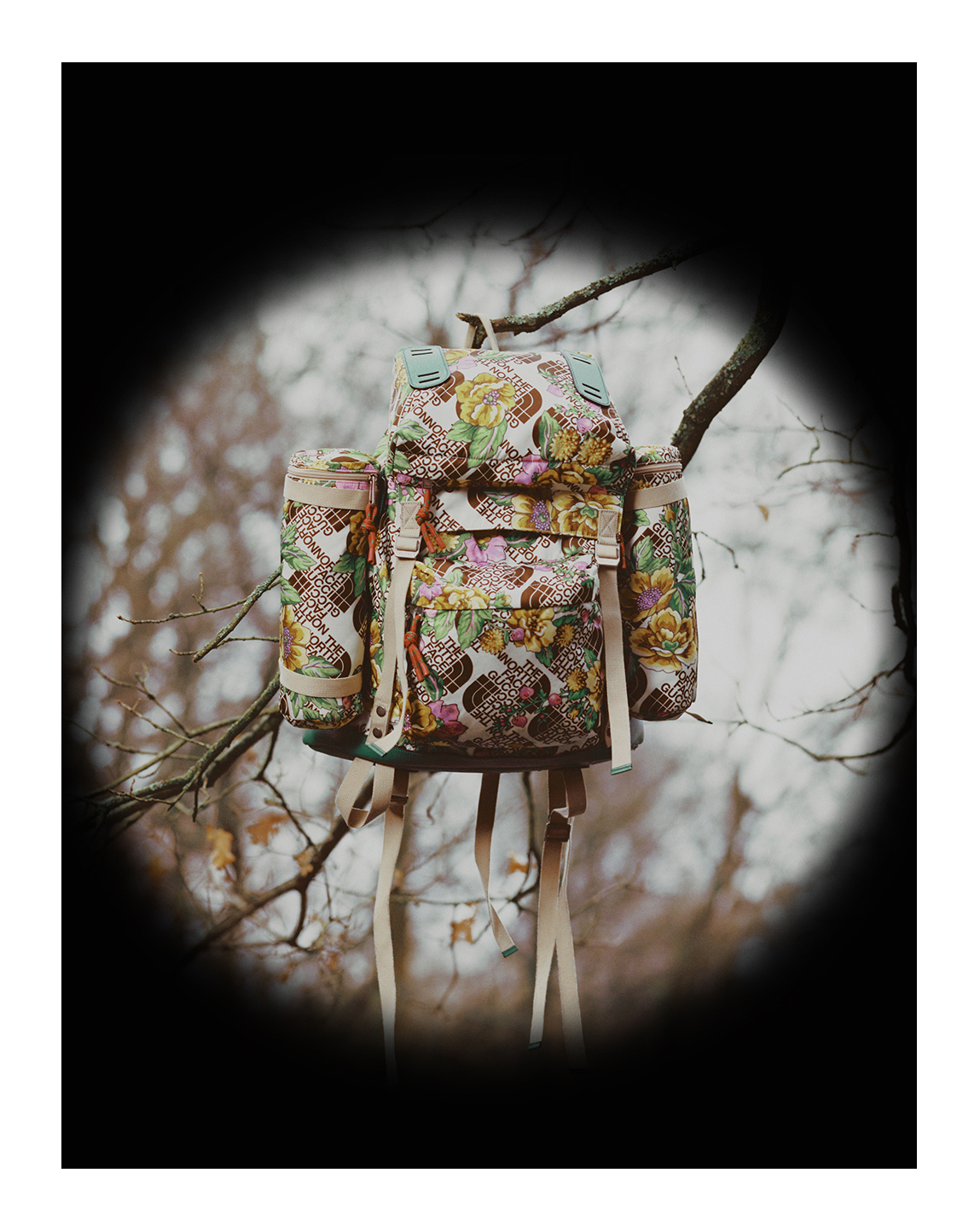 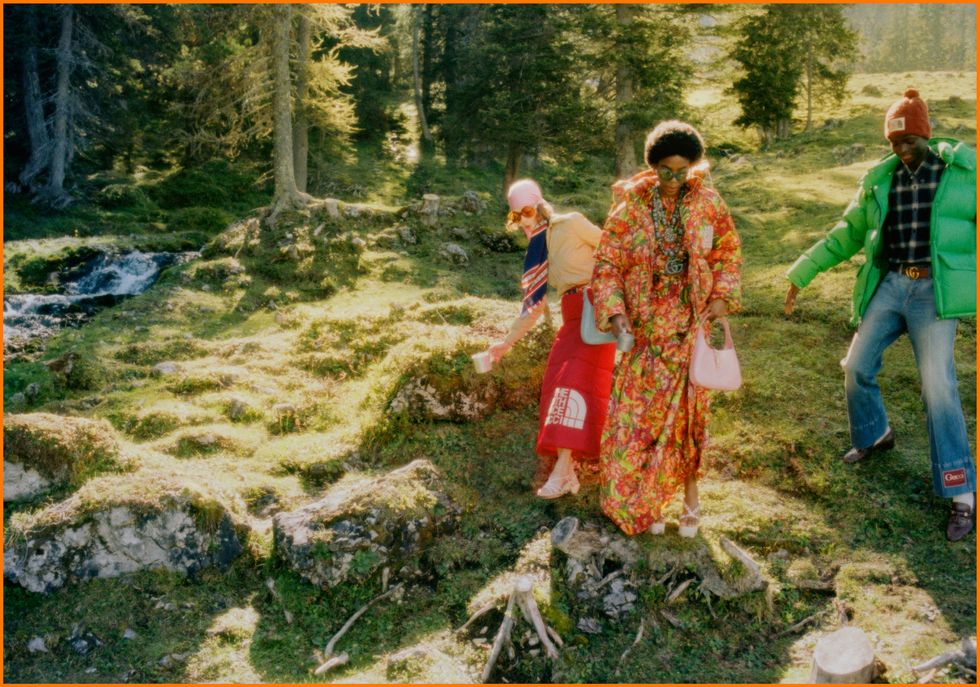