We’ve only just started looking the twenty-first century square in the face. As we enter into year-21, that which was simply “now”—as othered from “then”, that which could be studied and understood—has reached a point of maturation. Passed puberty, beyond teen-hood in its dusk, arrived at the dawn of its adulthood. If we were to imagine the twenty-first century (21C for short) as a person, they would be embarked on the tempestuous journey that is one’s early twenties. On the one hand, one is never quite as in-the-know (in every sense of the saying) as they are when crossing the big 2-0 threshold. Youth knows it all. And yet, in the words of Picasso: “It takes a very long time to become young”. But this is the magic of promise—there is the certainty of something; but the mystery remains, of which such thing?

It is at this point of promise that we meet 21C today. Many of us can recall “that one year”, early on, that forced us to ask the question: “who am I and what do I stand for?” The already infamous 2020 was that one year for 21C. Since, 21C has had to sit up, has had to look itself square in the face and ask the question: “who am I and what do I stand for?” As inhabitants of this age, it is our opportunity and our responsibility to define our century. It’s a little early, I hear you say. Well, it’s precisely because it’s this early that we have the chance to mindfully impact and influence the kind of individual that 21C will grow up to be. As someone who has just crossed over the big 3-0 threshold, it felt fitting to bring in the views of some of 21C’s peers: radiating with that all-knowing youth. We sat down—safely and socially-distanced of course—eyes set at the horizon to discuss the face of the future; a future we want to inhabit. 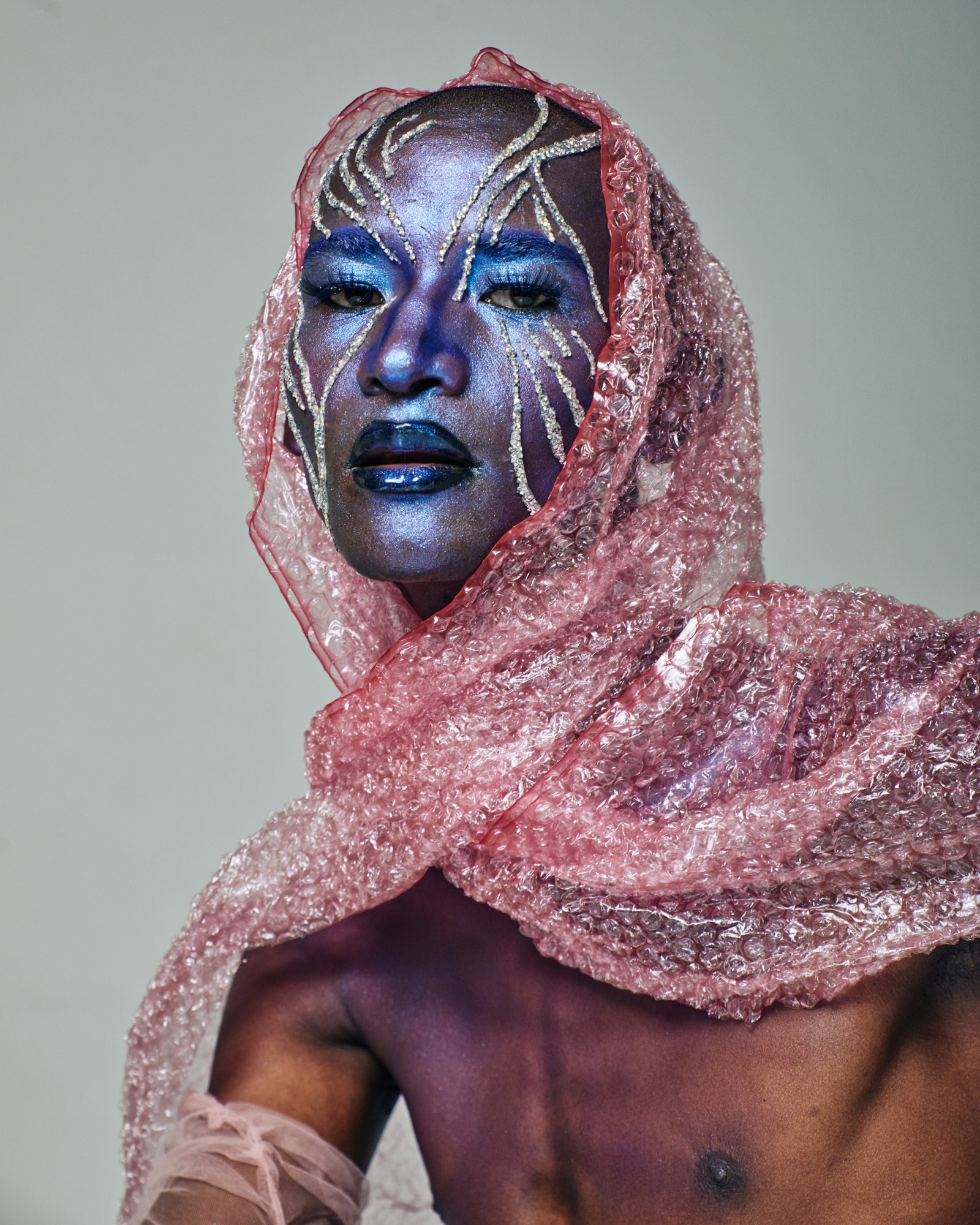 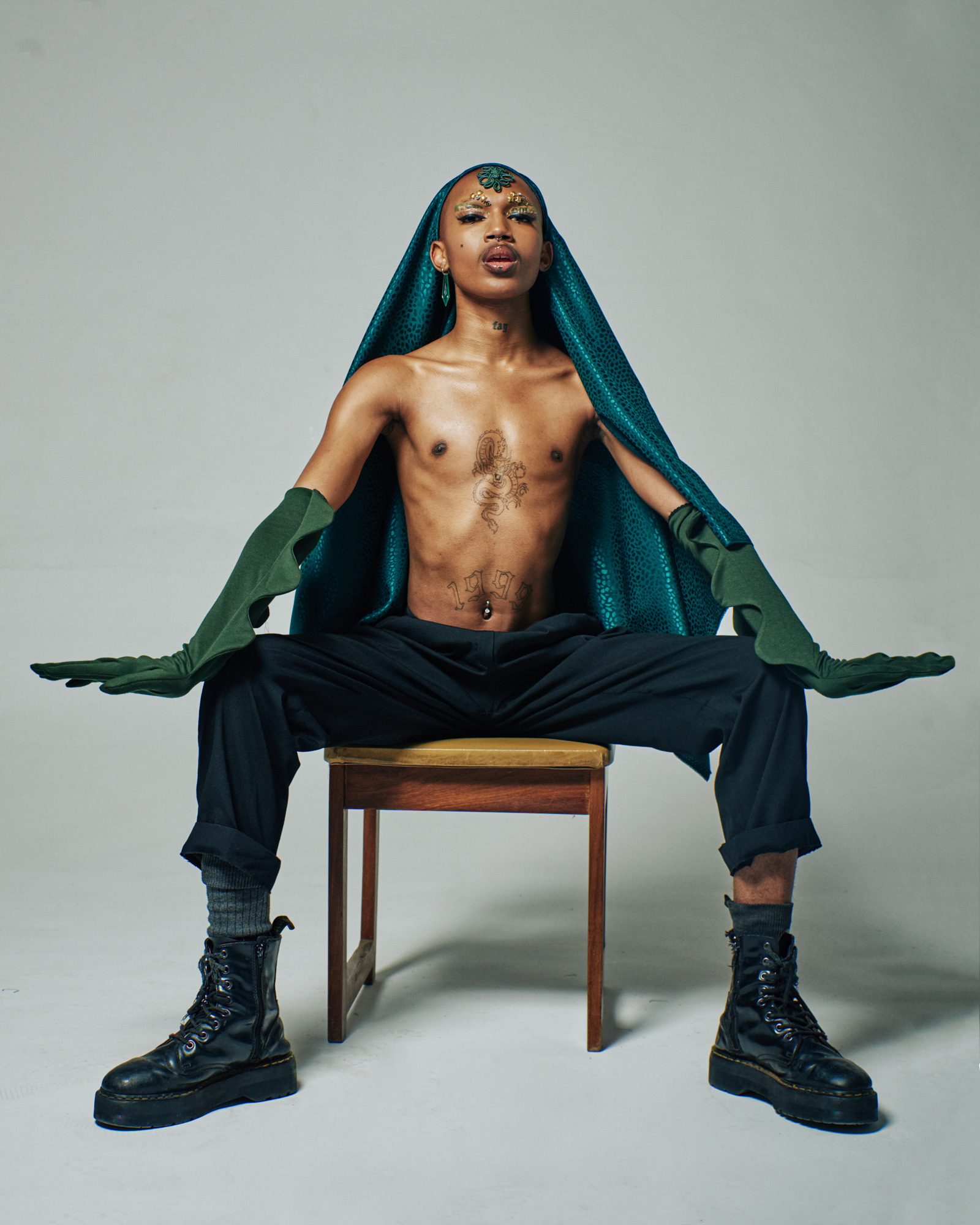 Let’s start off in the deep end, what kind of century are you working to define?

Ponahalo Mojapelo: The 21st century of my dreams is one that isn’t boring… so far, so good! As a 21-year-old in this time, it definitely feels like there’s a growing anticipation for a seismic pivot-point rumbling from the ground beneath us. That’s why I stay ready for literally anything! The feeling of being on the cusp of something historic is incredibly exciting. But, because the century and I are basically the same age, I understand how testing it is to define something so young. So, I’m just playing my small part to speed up the process of realising a world that doesn’t protect evildoers; one where being Black, ambitious and loud isn’t perceived as a flaw—and where queer people can get married and have families in peace.

Thapelo Mofokeng: Growing up, our external environments influence a lot of our programming. This leads to the attitudes and behaviours that people ultimately display. Right now, I feel grateful to live in an age of free thinkers; liberals; Black women, POC women and queer bodies who are owning their identities and bodies. In this age, the only opinion that truly matters is yours and possibilities are endless. But this is only the beginning of the equal and just tomorrow, where the impact of prejudice on our daily lives no longer exists.

Nkululeko Masemola: Well, I’m planning on continuing the gay agenda. So, a gay century is the only way to go about it. I want to help create a future where we stop normalising “normal” ideologies. When I was growing up, I didn’t have many references for what I wanted to be, so now I want to the next generation’s entire mood board.

George Pailman: Ultimately, I can only be myself. That’s the best way to touch people and to leave a mark on this earth. We are too driven by society’s invisible rules that we forget to tap into ourselves. I want to live in a century that is remembered as one that doesn’t dictate according to race, gender, sexuality, religion or other identities. I want to see “normal” completely redefined.

Hloni Mokethi: I am hoping to define this century as a place where freedom is first nature for everyone. They call my generation the born-free’s. Sure, we are grateful for the advances we enjoy today, however, I still live a life where I have to look over my shoulder all the time because some people don’t agree with who I am or how I express myself, or even how I dress. That’s why I’m looking to build a future that is a home for unapologetic authenticity, without the constrains of outside conditioning. We also need to build a world where discussions around mental health are taken seriously, not stigmatised. My generation is suffering with mental health challenges and people are dying because society looks them over. 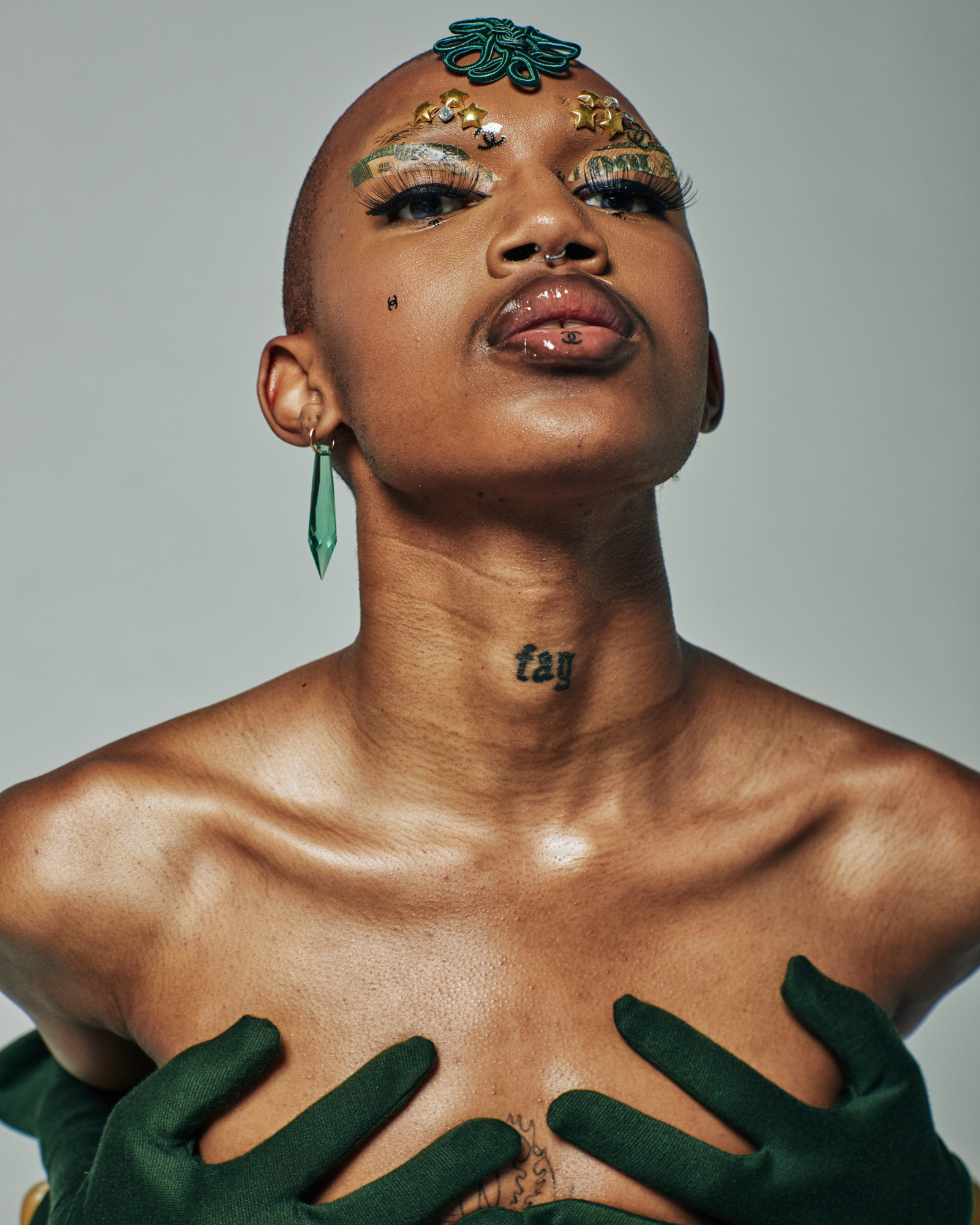 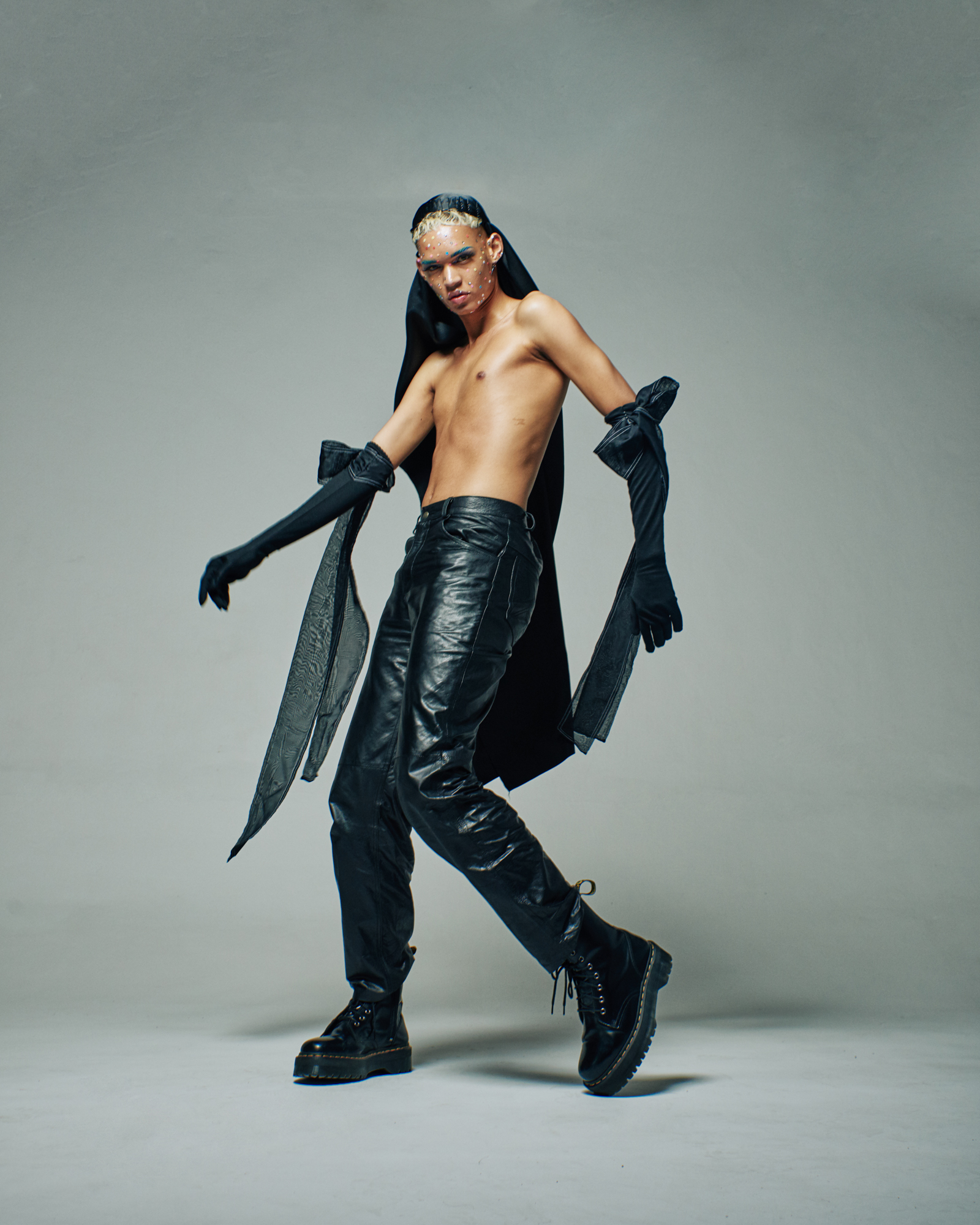 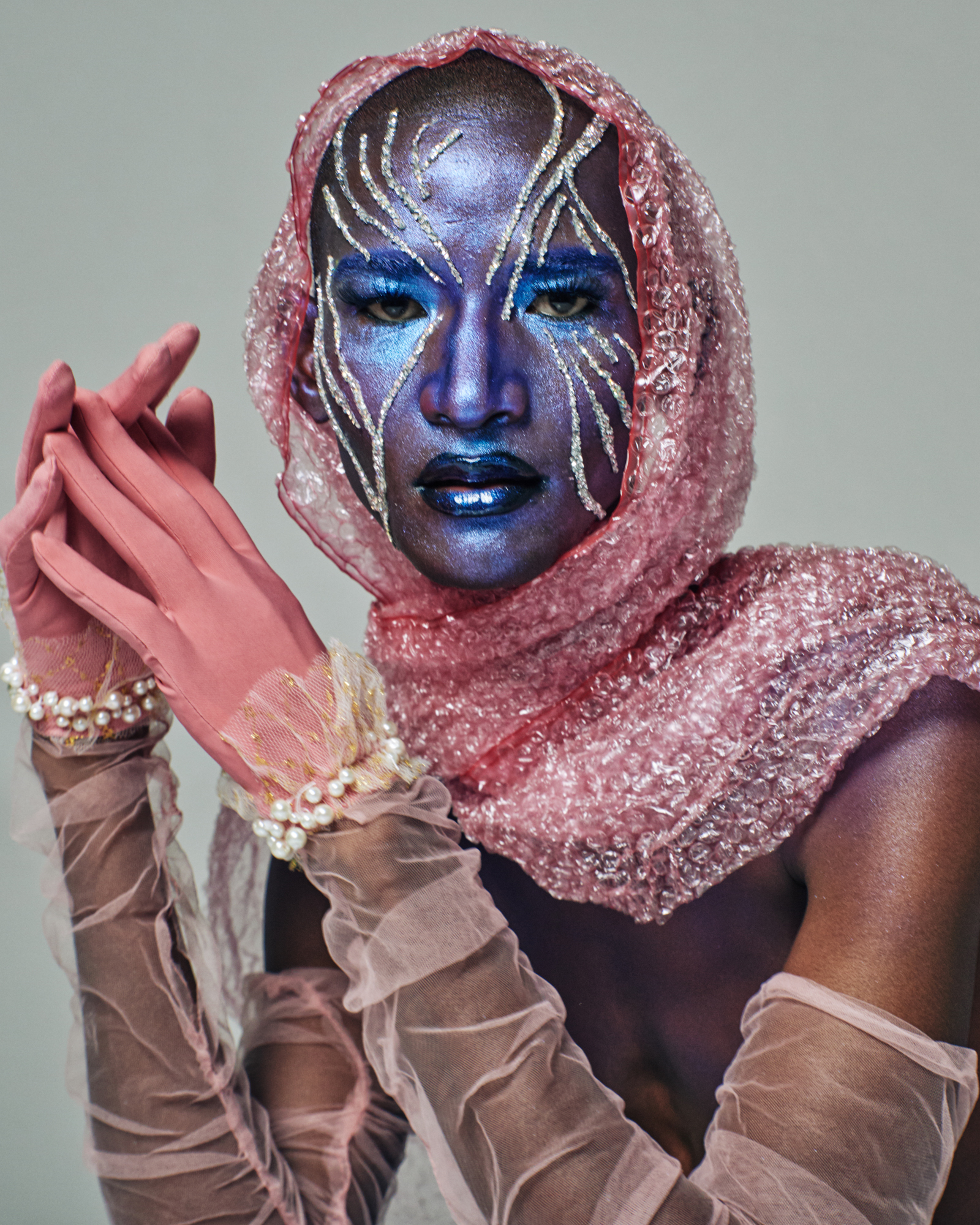 Today is “the age of the chosen family”. While we battle oppressive white supremacist structures and their isms such as ableism and classism, to name some—largely informed by historical and political inscriptions etched onto our physical bodies—we also have a great chance to reimagine and create our own communities—whether digitally or in IRL. How do you define your chosen family and curate the company you keep?

Ponahalo Mojapelo: I call my [chosen fam] “magicians”. They’ve survived the most gruelling ordeals, in mesmerising fashion, and there is no end to their wonder. I keep friends who affirm and comfort. I keep company that loves to laugh and sets out to invent the good it wants to see in the world. I’m at my happiest with other women—their company is automatically more plush, more satisfying and more welcoming to support and endearment. I don’t go anywhere if I feel that there won’t be love shining in that room. I’ve also been richly blessed to spend most of my life with queer people; pioneers of culture and change. They are the people who continue to make life more dynamic and worthwhile, for themselves and everyone watching. They magically make life beautiful even when it’s the total opposite.

Thapelo Mofokeng: Because I’ve been excluded from cisgender, heteronormative spaces for the longest time, trust is a big factor. That is compounded when you realise—as you explore and navigate Johannesburg’s queer spaces—elitism exists here too. It’s incredibly isolating. So the community I choose to live in freely and loudly finds a way to weed out judgement, toxicity and exclusivity.

Nkululeko Masemola: The thing is, I only reside where the queers reside. I describe us as queers trying to make up for the 2010s—Y2K aesthetic, grunge-esque hunnies who have tumblr in 2021! I look for brave friends who don’t wear a bad outfit, even on their worst days.

George Pailman: I often try to describe the company I keep, and I never know what to say. [My chosen family] is very different from one another but there is something we all have in common: [we] reside within self-discovery, a constant state of being. I’m very aware of energy, which you can’t fake. I always look at how people treat others around them, it’s the best indication!

Hloni Mokethi: We are colourful, strong, resilient and brave! People who can endure so much and keep their head held high. I’m looking for people I can learn from, where above all else, there exists respect. At the end of the day, authenticity is one of the truly unique things we have to offer the century ahead. But we are constantly pressured to “fit in” to various moulds that society has taken upon itself to construct and police. As someone striving to live out loud an authentic life, how do you keep your spirit motivated as you swim upstream?

Ponahalo Mojapelo: Confidence is performance art. It commands the room more than any difference or flaw. From my teens, I learned every single day to perform as a confident woman, detached from negativity, indulging only in her own power. A shy, self-deprecating 14 year old version of me read How to Win Friends and Influence People. There’s a section that says “fake it, not until you make it, but until you become it”. This attitude is more authentic, asking you to intentionally carry yourself as the more confident version that you want to be—until you trick your brain into staying in that habit. I’ve been doing it ever since. It must be going pretty well because everyone around me swears I don’t have a singly shy bone in my body. They laugh thunderously at the thought of it.

Thapelo Mofokeng: I am constantly reminding myself of how hard I fought to get to the place I am, in terms of self-confidence and self-love. I fully and freely love myself and understand who I am, where I come from and where I am headed. That’s what always brings my spirits back up.

Nkululeko Masemola: I’ve always lived my life as though I had no better option. That’s basically what has kept me going. Now, I know independence and I can’t go back. Life, might really be what you make it.

George Pailman: Rather than fitting in, I’d choose to be alone. It’s not always easy. But on tough days, I think of those who are younger in my family, and how much I want for them to be authentic.

Hloni Mokethi: I always remind myself that I am perfectly imperfect and that I don’t have to live by anyone else’s rules. It’s okay that I don’t have it all figured out. Rather, I choose to enjoy the story book that is life.