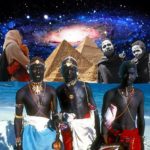 The first time I opened the Soundcloud link to Jakinda’s  Afrika 3000,  I felt a powerful surge of the uncanny. And by uncanny, I don’t just mean mysterious. Rather it was the sense of what Freud famously called ‘ the unheimliche’. That is the sensation of a strange familiarity, the jolt of déjà vu. Or, as Jack Nicolson put it before the Overlook Hotel drives him insane in Stanley Kubrick’s The Shining  ‘When I came up here for my interview it was as though I’d been here before. I mean … It was almost as though I knew what was going to be around every corner’.

Indeed, the epic Intro reminded me of the cosmic soundtrack of Kubrick’s 2001: A Space Odyssey– both disconcerting and awe-inspiring. After bursts of ambient noise the track naturally takes a turn into driving gqom and trap inspired beats.  The following three songs deepen this epic vision. As with Dokta Spizee’s Gemeni mixtape, it’s as if the grimy intensity of SA electronic music is being broadcast out to some alien civilization.

The artwork for the EP highlights the Pyramids against a sea of stars, against people in majestic robes and face paint.  A pure distillation of the aesthetics of Afrofuturism. The vast body of Afrofuturist literature, music and visual art mixes Science Fiction with historical reality to explore the experience of the African diaspora, through metaphors of alien invasion and technological shock. The mixing of the ancient and the futuristic has an important utopian component, a yearning to both redeem and escape from the horrors of history. As jazz great Sun Ra once put it ` I`m playing dark history. It`s beyond black. I`m dealing with the dark things of the cosmos’.

Afrika 3000 cosmic focus speaks to a broader futurism within contemporary dance music. Artists like Gaika and Fatima Al Qadiri have focused on the dystopian sounds of today, making beats out of bullets and broken glass. Jakinda holds things down for the utopian end, using the cosmos as symbol of future freedom and possibility.  His music hums with a palpable yearning to storm the heavens.