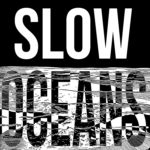 Writing about music from day to day usually isn’t that difficult. A lot of releases are so one-dimensional, cliché and uninspired that you can name drop a few genres, say some shit about a hook here or a beat there, give some info about the artist, throw in some hot-takes and you’re good to go. So it’s a bit daunting being given Jumping Back Slash’s latest EP to tell you about. Slow Oceans is so incredibly layered and nuanced that I feel like I may be out of my depth, which makes it rather aptly named.

I’m on my 13th listen and I find myself drawn to new subtleties each time. The soft, repetitive “thump” of the kick-drum throughout “Come Rescue Me”. The reverberating bass set against playful use of a vocoder on “Khule Naye”. The way “Signs in the Stream” builds so subtly and makes repetition an art. The opening track which the EP is named after, “Slow Oceans”, sounds like the opening scene in a movie where there’s a new dawn in ancient land. Maybe there are dinosaurs, maybe it’s not that far back in time, I don’t know, but you get the picture. Like the scene in Jurassic Park where they’re in the trees and the sun comes up? Along those lines.

It’s all quite something and there’s a lot going on across the six tracks, but they’re deftly held together by the ever-evolving producer and his choice in featured artists. Nonku Phiri lends her talents to the closing track, “The Siren’s Call”, and the sonic sorcerer Hlasko adds his touch to half the productions- “Khule Naye”, “In the Void” (which also features Shane Cooper aka Card on Spokes) and today’s exclusive premier, the hypnotic and haunting “Signs in the Stream”.

Jumping Back Slash has such a unique catalogue and Slow Oceans is a carefully considered, and masterfully crafted addition. The EP drops on the 27th of January but you can treat your ears and listen to a piece of the puzzle, “Signs in the Stream”, below.