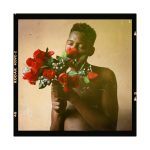 Insizwa is a Zulu term that describes young masculinity. Bongani Ndlovu photographs himself for the series, naming himself as masculine and in a sense, subverts the term. Growing up he was not considered to be masculine and often times shamed because he did not fit societal understandings of what masculinity looks like.

Delving into ideas surrounding representation and black masculinity, Bongani references ethnographic archives in his self-portraiture. What defines black masculinity? How has the black body been viewed historically? –these are the questions he asks with this body of work. “A major reference point of this work comes from the ethnographic photography, concerning black bodies and ‘race ranks’, by natural scientist, Louis Agassiz. I am fascinated by how this work unashamedly framed the faces and bodies of slaves.” With absurdity or, I would rather say a tongue, in cheek methodology: Bongani investigates what it means to be a man and the stereotypes that surround masculinity.

Asked about the way in which posing a challenge to gender stereotypes and ethnographic imagery correlate Bongani tells me, “The purposes of these photographs were to ‘scientifically’ motivate how the races of people in this world were demographically separated in skin colour, culture, intelligence and respect. With the separation came an order which races were superior and inferior, utilizing the similar mode of photography as the ethnographic, I aim to create a satire on my work. I am also classifying, analysing, and researching myself photographically. This project revolves around the theme of representation. In this project [I] am representing myself truthful, how do I see myself but still using the same ethnographic approach.”

Bongani further expresses, “being a subject in all the images, gave me the agency to construct images based on my feelings as a man, and to show how I view myself.” On how his representation of black masculinity breaks away from gender constructs Bongani shares, “In history man especially [a] black man was seen as that strong working hard figure, a warrior and in slavery a gladiator and that influenced masculinity as an idea. So, with this body of work [I] am questioning masculinity and also fighting that idea. Photographing myself feminine in different characters and [a] stereotypical viewpoint. Using the mode of self-portraiture, which is stereotypically regarded as a mode for females.”

Born in Katlehong, Bongani Ndlovu attended the Market Photo Workshop from 2017 till 2018 where he completed all three tiers of their photographic programmes. In addition to this, he has collaborated with Lightfarm, Amsterdam Rainbow Dress and Assemblage. ‘INSIZWA’ will be exhibited at Turbine Art Fair 2019 as a part of RMB Talent unlocked 2019.