I’ve often thought—in some sense—that there is something in Ngadi Smart’s work and artistic practice that both says something about and disrupts tidy notions of home. Less so in the actual conceptual and material articulation of her work but more so in the human vessel the work is mediated through being Ngadi herself and the unfolding of her practice between Sierra Leone, Côte d’Ivoire and the UK. However, the beginning for Smart has always been Sierra Leone, coming from “a family of strong, proud Sierra Leonean women” she comments, “my Grandmother was one of my biggest inspirations, and always taught me the importance of  history and [of] knowing who you are — that has really always stuck with me”. Ngadi’s practice takes shape in the forms of illustration, photography, design and mixed media — primarily in the form of collage art. From artistic meditations on Black femme erotics, to considerations of identity and even questionings of beauty — the concerns explored through her work are as fluid as her movement and always accompanied by an aesthetic of deconstruction and questioning. Her and I exchanged some thoughts and words which follow in the interview below. 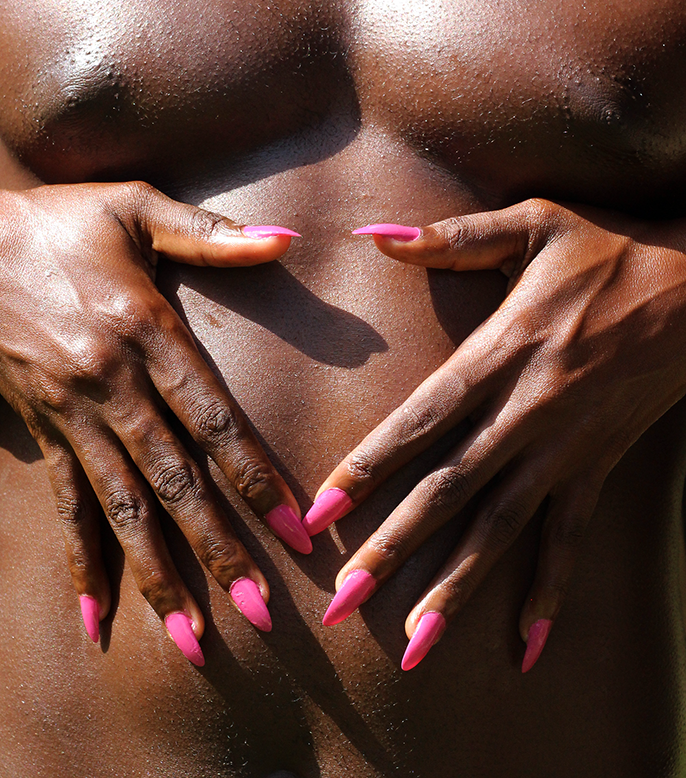 shot for The Nice Magazine

I think—to our modern world’s and imagination’s disservice—the nation state has become a logic of understanding and meaning making, which has influenced in its reach even on how we think of artistic creation. She’s a South African artists or Ivorian writer etc. Our awareness of the complexities of the nation state—as construct and context—eroded along with our awareness of the porosity of borders. I think the fluidity of movement that has accompanied your artistic practice and its journey, in some ways unconsciously points to the ridiculousness of that logic; with you moving between Sierra Leone, Cote d’Ivoire and the UK; the north and the south. Yet, you name yourself a Sierra Leonean artist despite the porosity of your movement. Why this naming of yourself as and affinity to Sierra Leone first as an artists?

Ngadi Smart: I understand and acknowledge the artificial nature of borders created by western powers who carved up Africa for their own benefit. But nevertheless I can’t ignore my heritage, which is rooted in the nation state of Sierra Leone, but also in my identity as a slave descendent. My work seeks to celebrate this heritage. To honour those that came before me and were forcibly brought to this part of the world artificially carved by outsider but were still able to build a culture and traditions of their own. I am just very proud of my lineage. Sierra Leone is a beautiful country with an incredible history and lots of potential, unfortunately however, [one that has also] had many misfortunes. Due to its tumultuous past, not many positive stories are told [about] the country. If I can mention it as much as I can, then perhaps it can change the perception people may have on Sierra Leone — or even the African continent. I come from a family of strong, proud Sierra Leonean women. My Grandmother was one of my biggest inspirations, and always taught me the importance of  history and [of] knowing who you are — that has really always stuck with me. 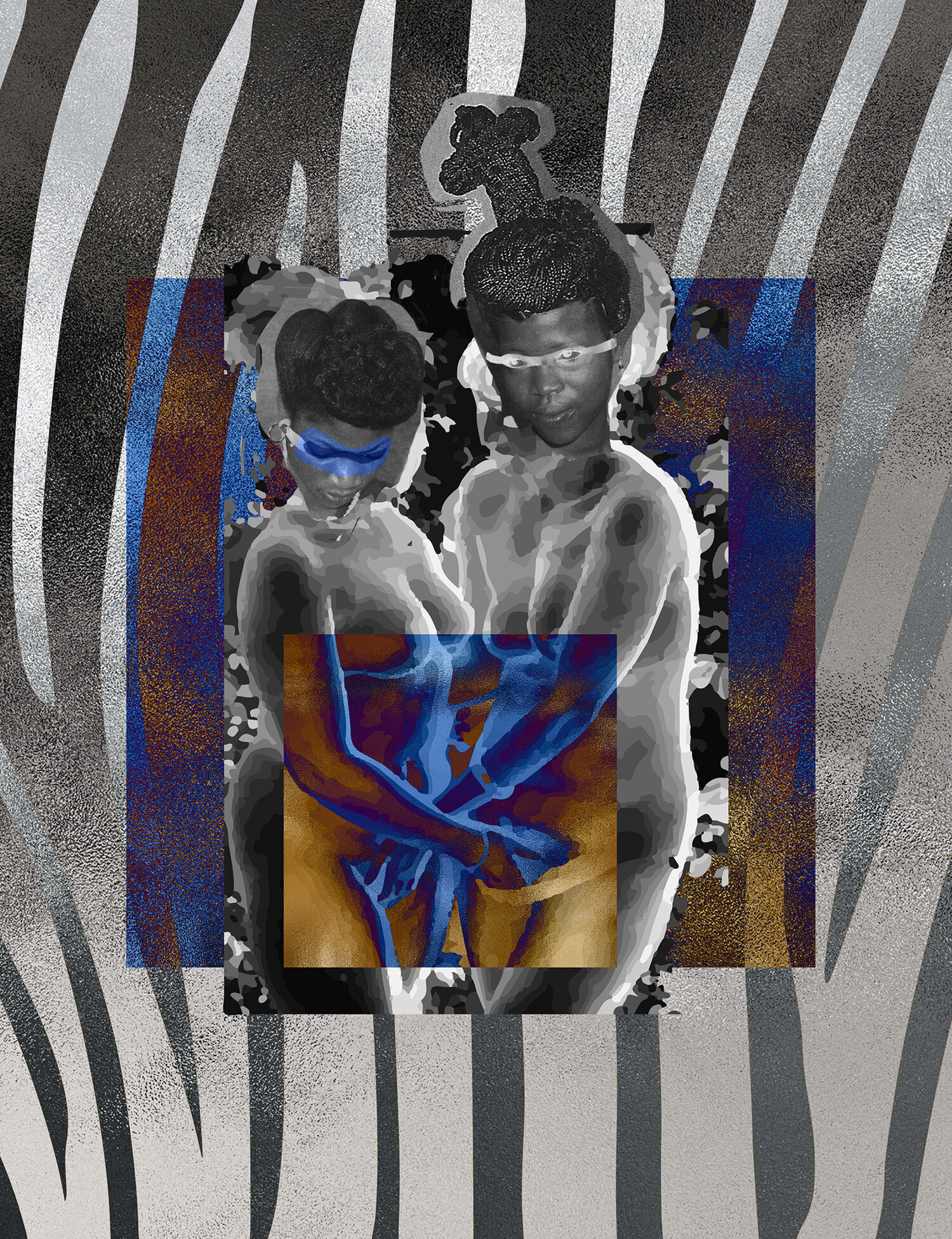 The photo series you captured for Atmos Vol. 2 Latitudes, contributes to the conversation of climate change and ecological disaster in an incredibly interesting and nuanced way visually, at least I think so. It’s in the juxtaposition of the decaying imposing colonial architecture and in how the human figures who also make up part of the composition — feel as though they are an organic part of the natural environment and context. It figured to me as a sort of visual contestation to the racist logic and discourse of mainstream eco-work and consciousness. That places blame on marginalised people through language like over-population thus absolving white capital supremacy from assuming accountability. Even though we know that Indigenous people across the world have lived for centuries in balance and harmony with their environments. Can you tell me more about conceptualising, thinking through and capturing that body of work?

Ngadi Smart: Thank you! I absolutely agree with you concerning the topic of racist logic and discourse of mainstream eco-work, and indeed Indigenous peoples have always shared a spiritual, cultural, social and economic relationship with their traditional lands. Atmos is a magazine whose main focus is global environmental issues. My concepts took form from the magazine’s main mission: Attempt to capture the essence of a culture in an editorial, while retaining an eco-friendly approach. I wanted to show—through the styling and the infrastructure—Bassam’s juxtaposition of traditional and modern, and highlight the stark contrasting effects of its French post-colonial past, despite it being a UNESCO World heritage site. So, I chose only to use local models & designers, materials and fabrics, as using local designers and craftsmen meant we did not have to get any clothes flown in for this shoot: 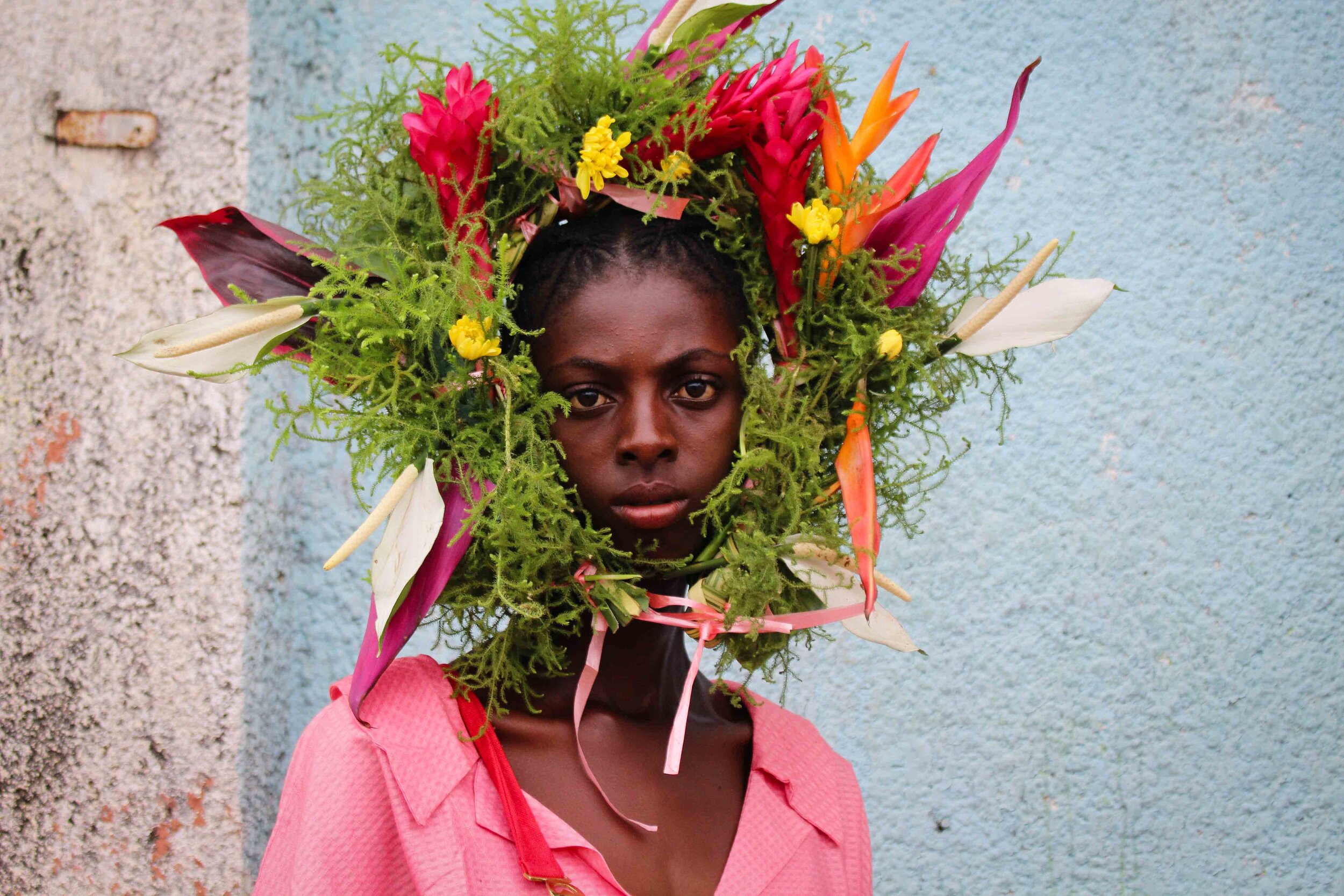 Ivorian Designer, Kader Diaby of Olooh Concept, designed the clothing.The material used for the clothing is made of natural fibres, and was from a previous collection, which meant nothing new was produced for the shoot. He also works with only one tailor, the work is never produced via a large factory. The hand and feet raffia ornaments were created by a local artisan named Coulibaly Salia, directly inspired from my research on Ivorian traditional raffia wear. More specifically, what the Guro and Yacouba wear on their feet during their dance ceremonies. I thought they worked well style wise and are recognisable (iconic) items. I chose to have local florist Jean-Baptiste Kiemtore, who is situated right around the corner from where I lived, create a botanical take on the head ornaments, directly inspired from my research on traditional African raffia head pieces. Local artisan Coulibaly Salia also created the wicker hat pieces, all from local Rattan, and have been featured in Olooh Concept’s lookbooks before. Rattan is a rapidly renewable material natural to the African forests where it is harvested. Since rattan grows very quickly, requires little water to grow and is almost always grown pesticide-free, it is an eco-friendly material that uses less of the Earth’s resources. I was basically trying to use as many resources close to me, so as not to create much carbon footprint or use up new resources. 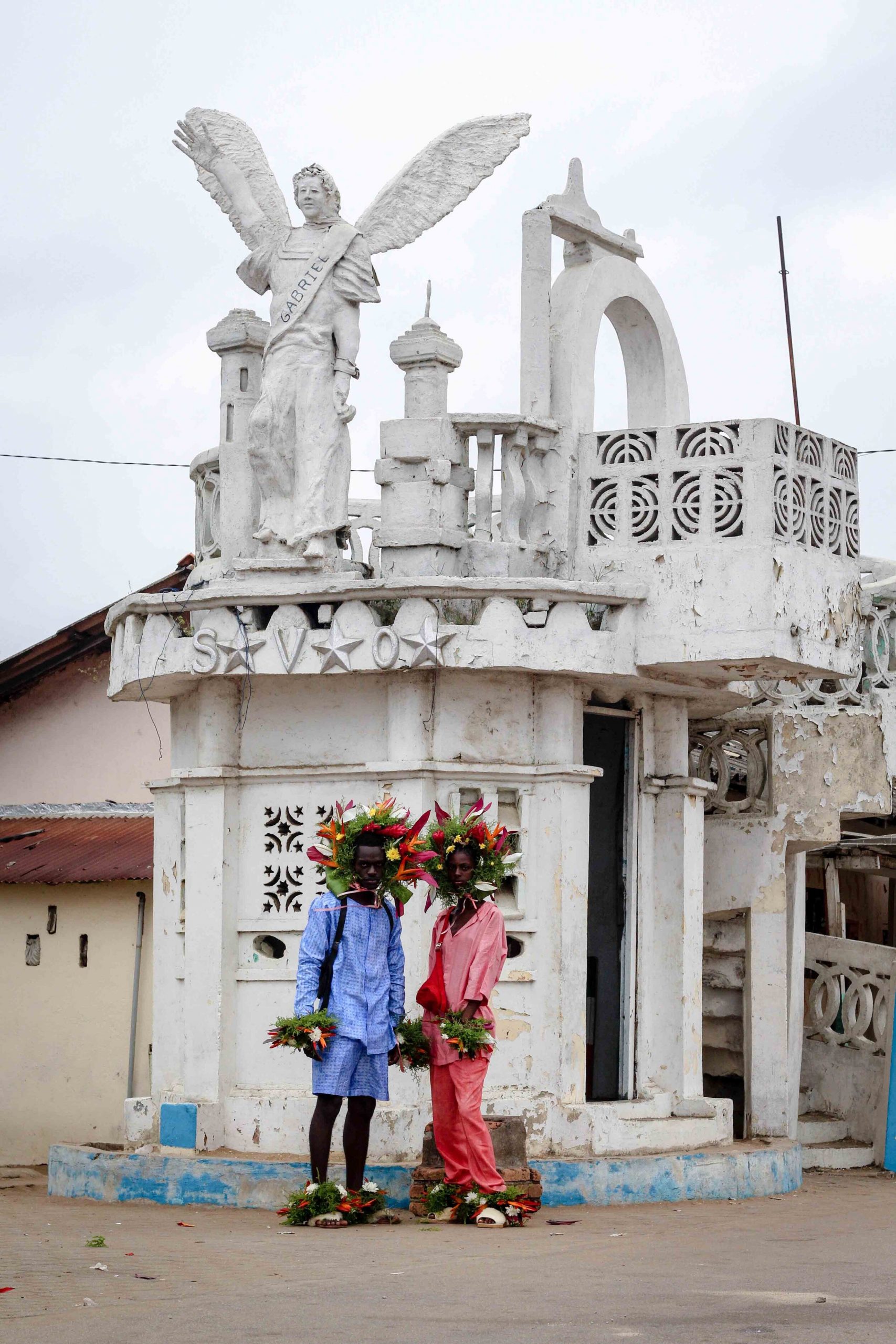 In the past couple of years you’ve been expressing yourself creatively through animation more, what’s propelled this development and what do you think animation gives you or what do you find in animation that you can’t through photography and vice versa?

Ngadi Smart: I have always wanted to do moving imagery, whether in film or animation, so this is just me tentatively attempting to push myself in that direction. I think animation is just another way of telling a story. it is another, more intricate medium to tell your narrative — and perhaps you can construct a narrative more easily than with photography, which can tend to give the illusion of being factual; despite the fact that sometimes, it just simply isn’t factual.

I think as with many places, our continent’s H/history and relationship with the constructs of gender and sexuality is incredibly complicated, nor is it monolithic across the continent and its many countries. So, I think for a lot of us trying to carve out our relationship with sexuality and gender, it sort of becomes a site/sight of experimenting and trying at possibility — we have to write our own scripts as the world has never cared about the erotic pleasures, possibilities and practices of Black femmes. Your Me, First collage series lives in this space of inquiry. Can you unpack those three collages for me a bit?

Ngadi Smart: Me, First, was a series I made for Looking Glass Co‘s Virtues and Vices exhibit at Dasgiftraum Berlin at Gallery Weekend Berlin. Looking Glass Co are a collective that celebrates artists from Africa and the Diaspora across Europe. I exhibited 3 new collage pieces. The theme for the exhibit was about exploring adopted relationships with various objects, commodities and behaviours and the ways we use them as a coping mechanism in everyday life. I chose to explore the relationship women have with self care, specifically through sexuality and our own self pleasure—as I don’t ever feel this is represented enough—and certainly not from the perspective of Black women. I liked the idea of me, a black woman, re-appropriating something constructed in relation to myself, to give it a stronger message. Some of the images I used for this project were from 70s porn ads, which I personally feel have more emphasis on the (femme) pleasure.

What are hoping to manifest going into next year?

Ngadi Smart: All I want to do is just make more and more meaningful work. 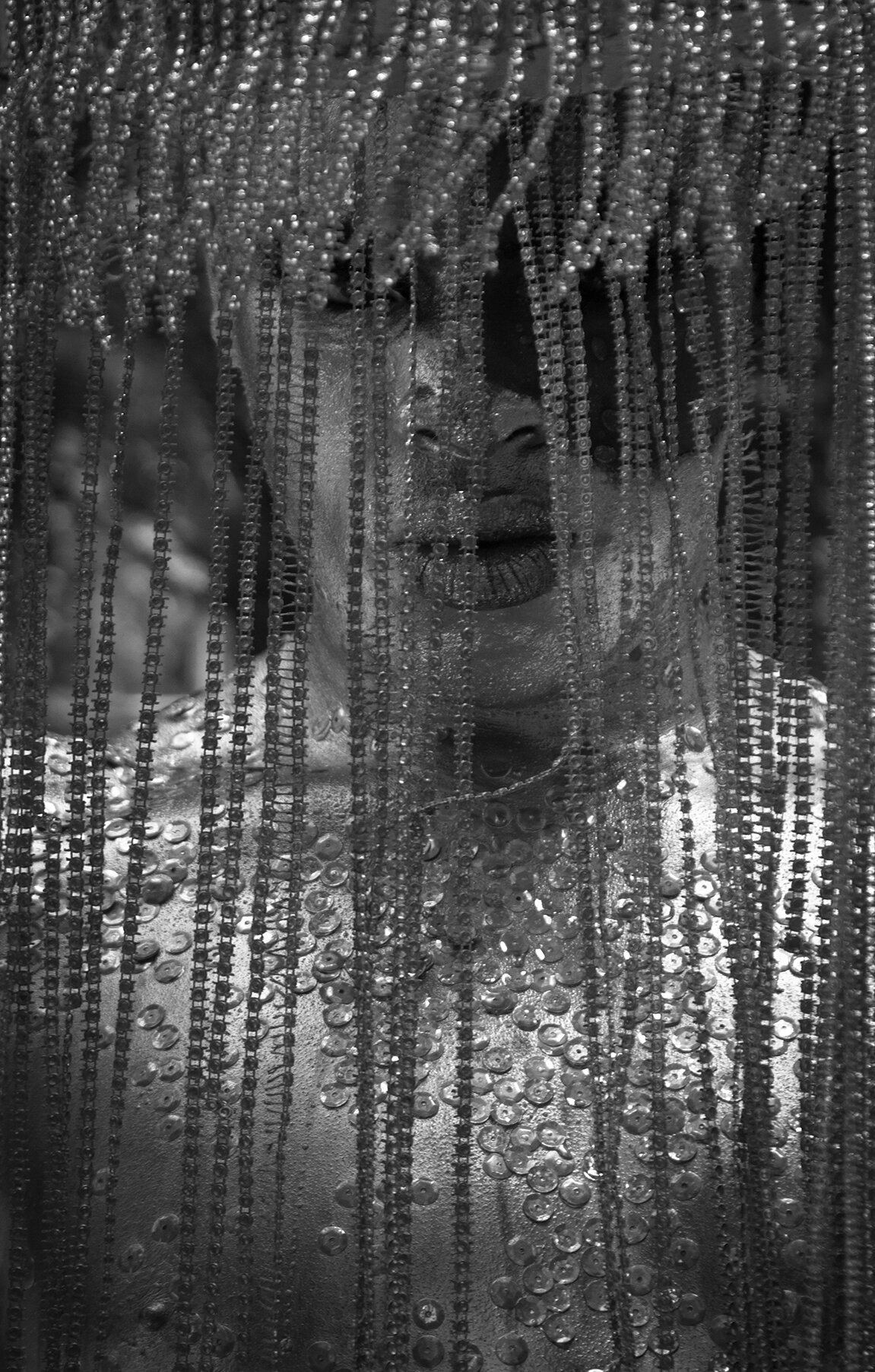 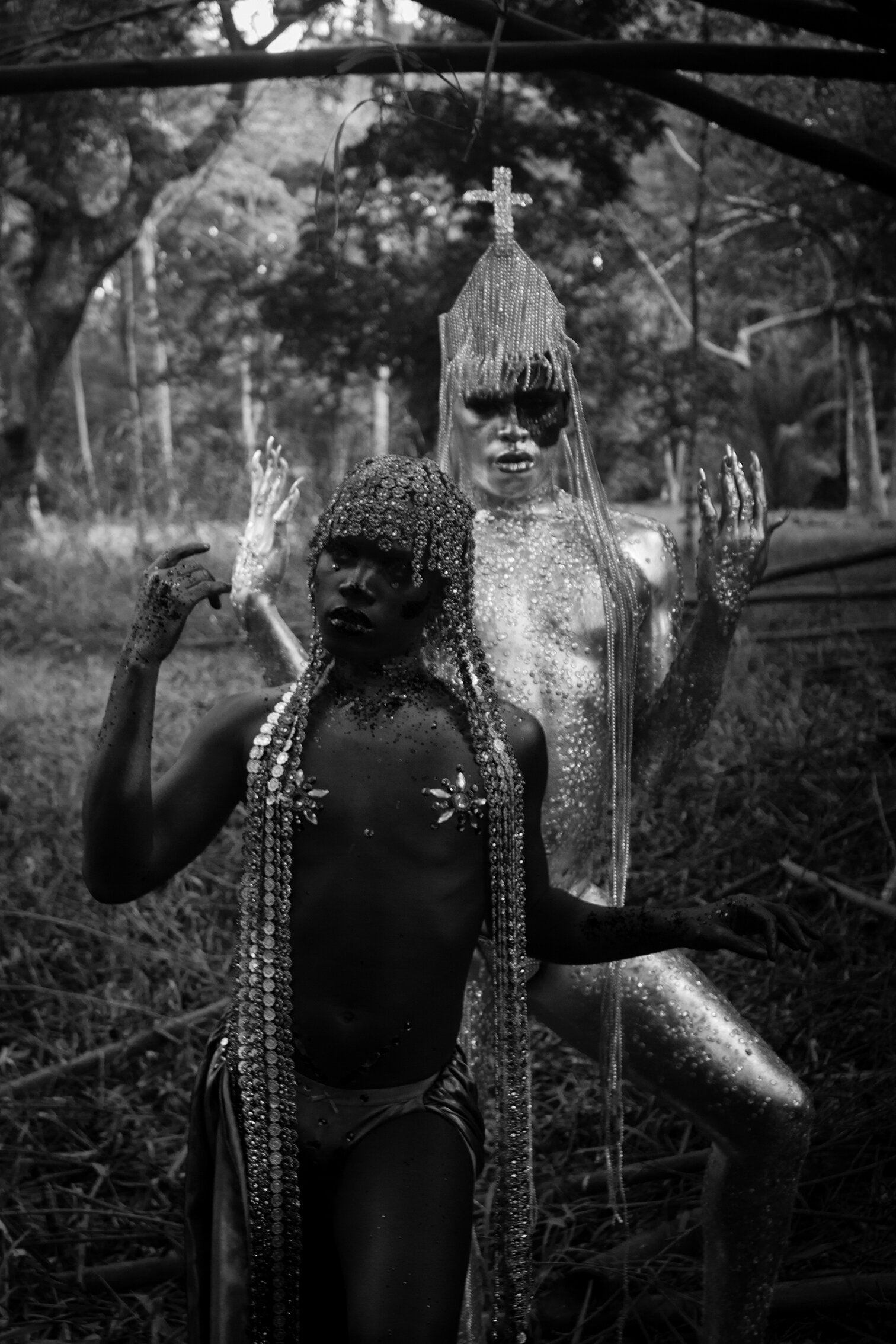 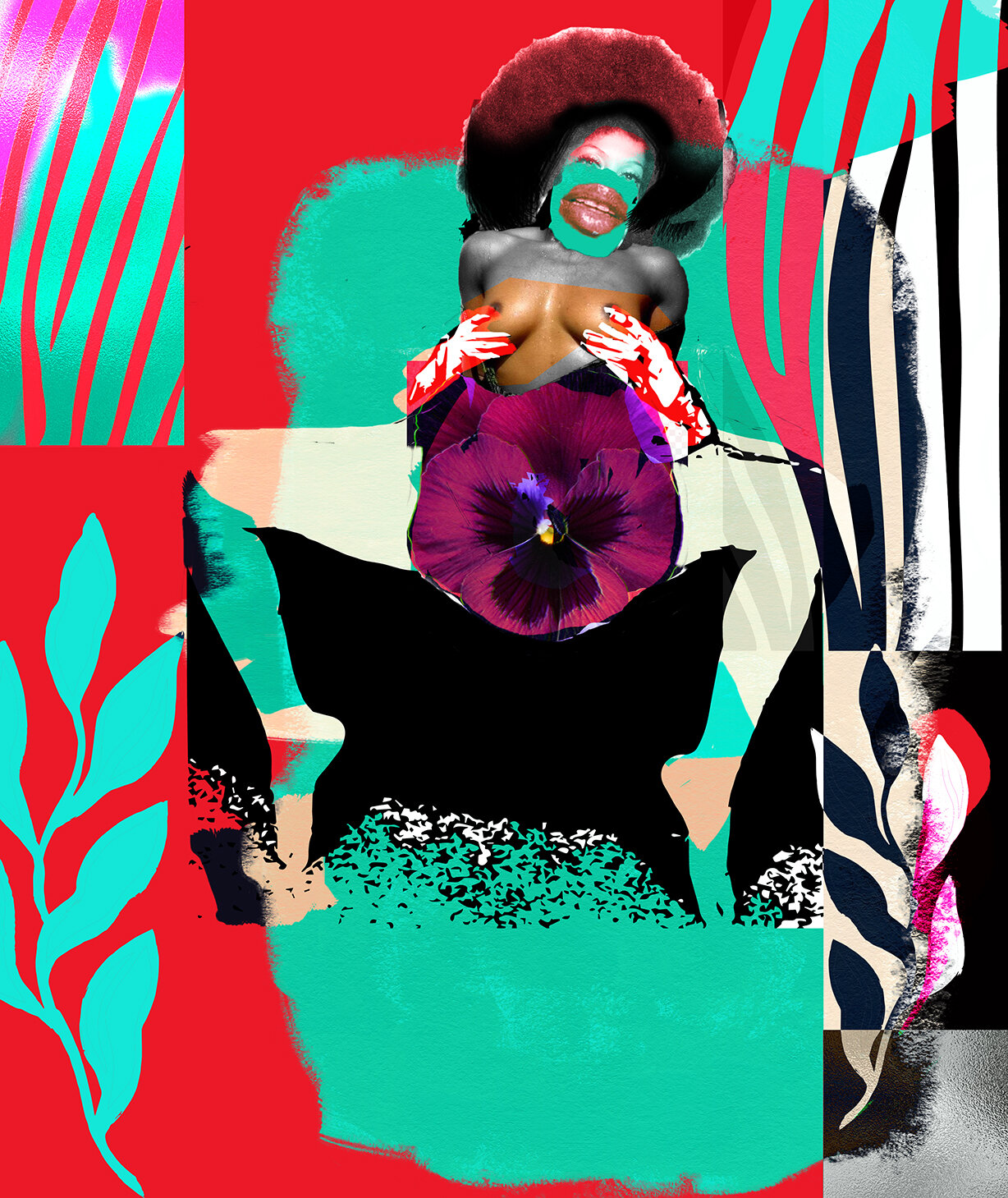 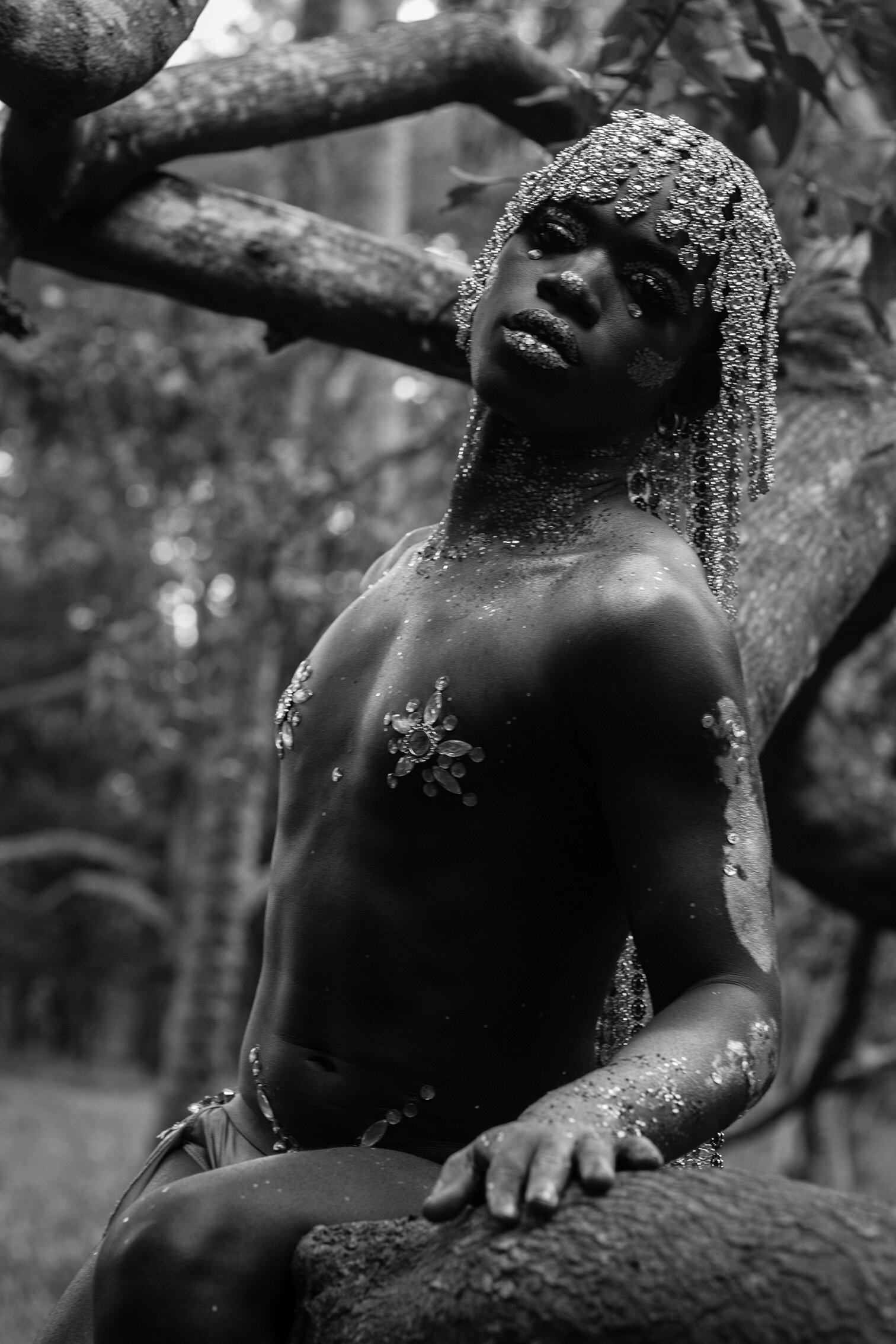 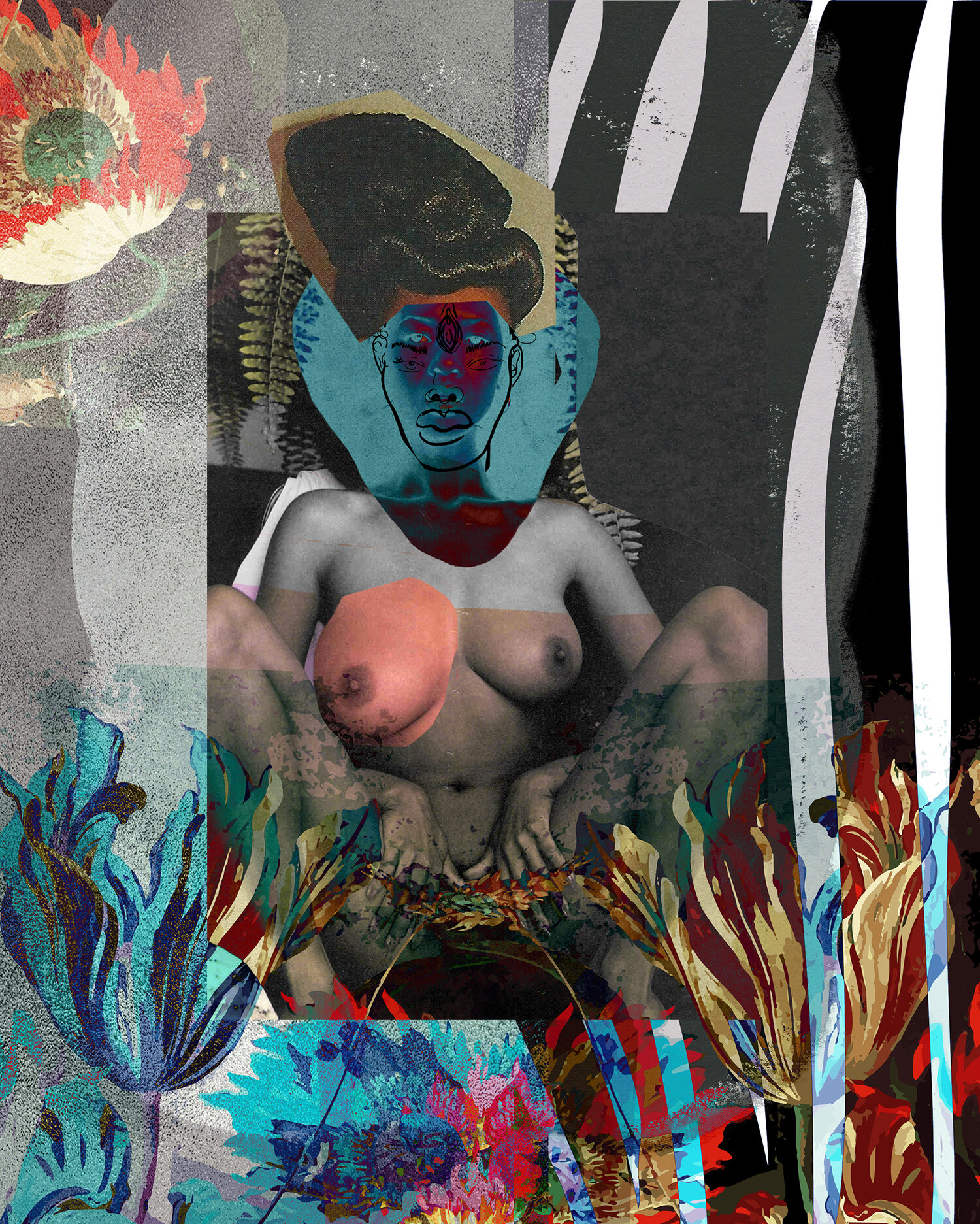 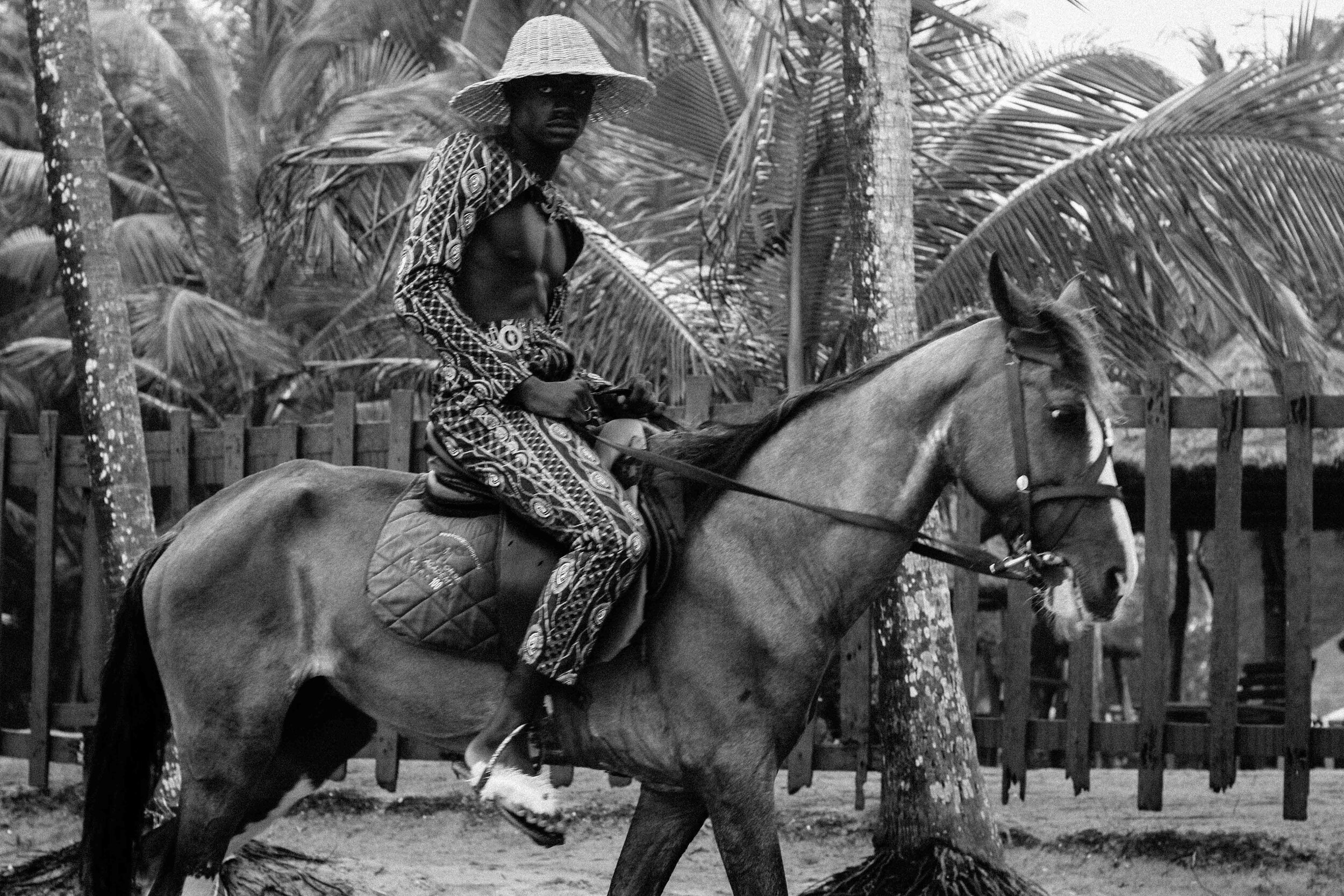