In the day to day living of our lives, as we pass thousands — if not millions — of faces in our lifetime, it can be easy to be consumed by the seeming vastness of life on earth. One might believe, from our devastating impact on it, that we as people outsize the world.

Those were exactly the voices co-curators of Our Ocean is Sacred, You Can’t Mine Heaven, sought to bring together at the 2022 National Arts Festival.

In the exhibition, everyone, from poets to photographers and ethnomusicologists came together to make a compelling case for the protection of the waters that uphold and surround South Africa. And a compelling one it was, as works within the exhibition were used in the long legal battle of the people against massive corporate bodies in the fight for the ocean. 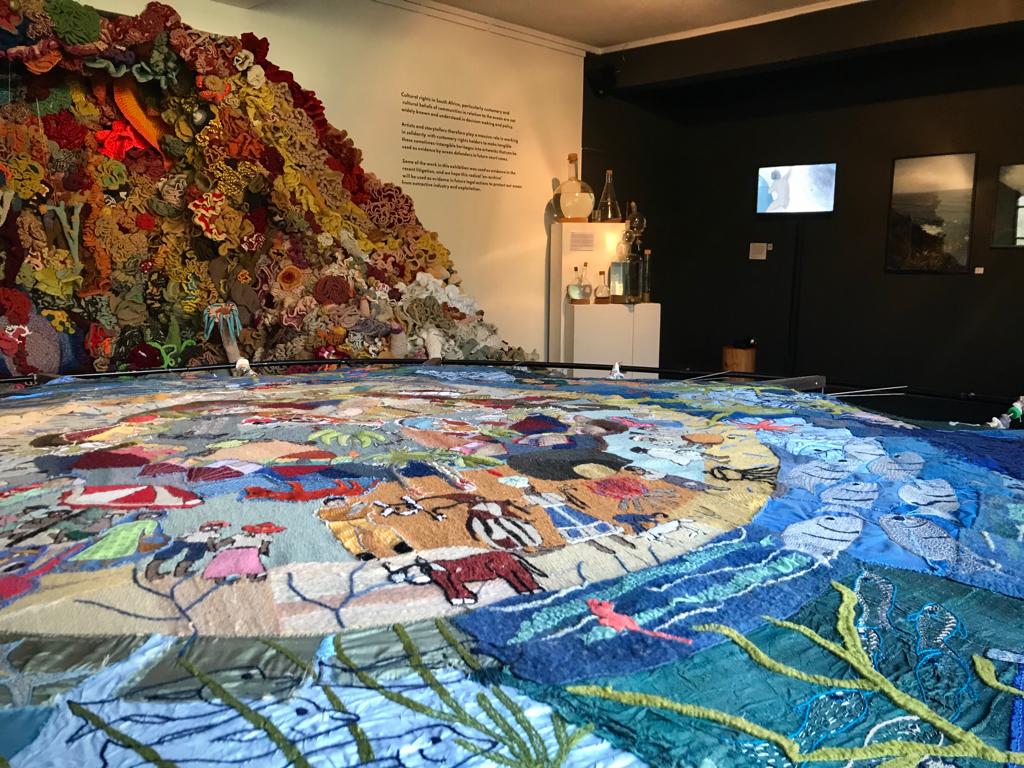 “The exhibition is called this because there’s been quite a long history — the last 10 or 15 years — of already trying to exploit our oceans for oil and gas. But we have this scenario where, like how they carved up Africa in the 1800s, the same kind of process is happening now for the ocean.

There’s this concept of Terra nullius, this free space that doesn’t belong to anyone,” said Dylan McGarry, one of the lead curators of the shared exhibition. “And our governments in Southern Africa and Africa are kind of being pushed to sell off areas of the ocean for mining, just because of the struggles with economies.”

Dating back to the Zuma era, a peak in tensions over the supposed ocean economy was reached in November 2021 as Shell tried to claim the Transkei coast as economic soughing ground. Since then, small scale fishers and customary rights holders have been the subjects of four indictments in court cases. 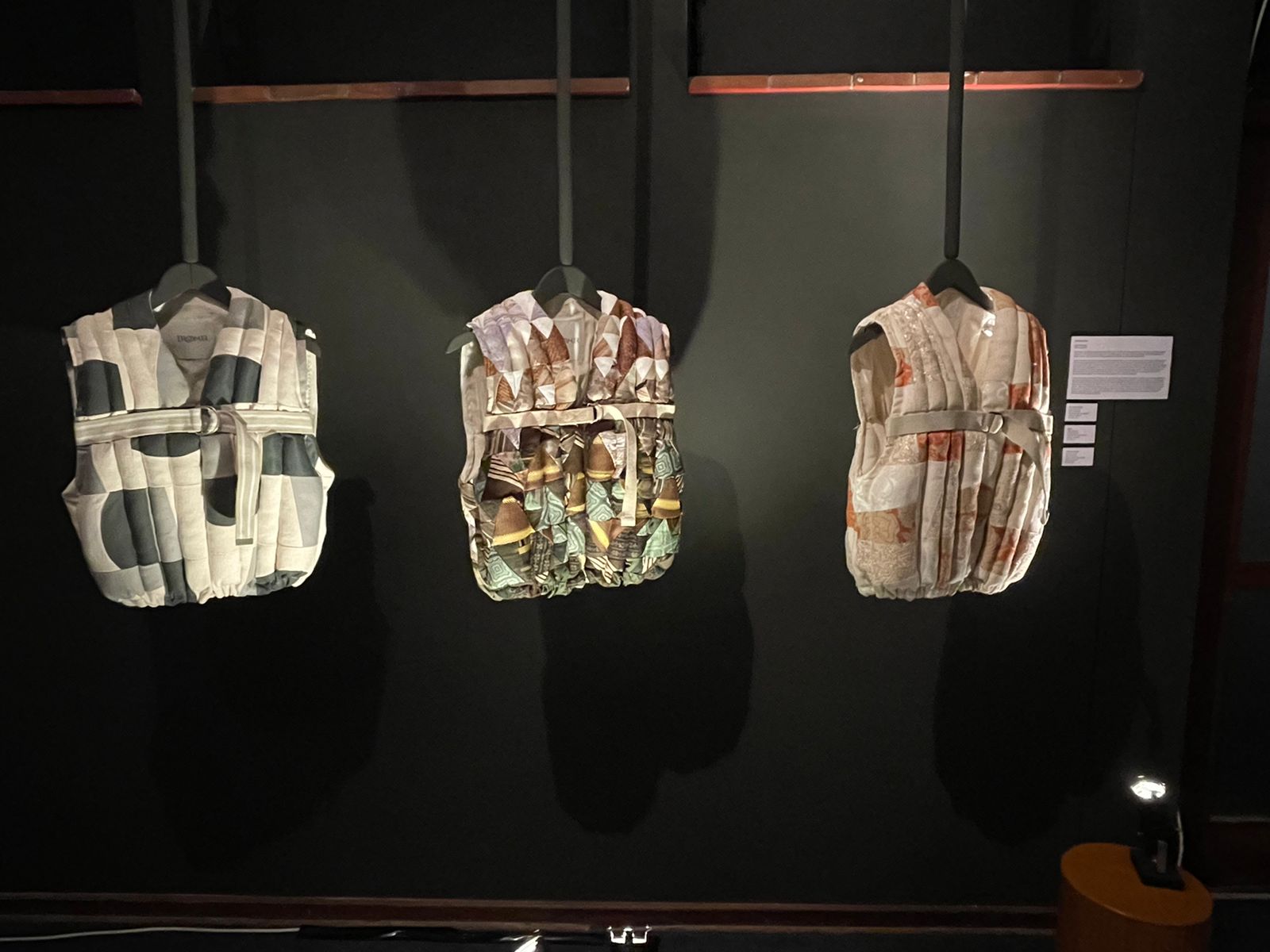 “These are people who are very dispossessed and are seen or considered last when it comes to policy or benefit sharing when it comes to the ocean,” Dyl shares. “But they are actually at the forefront of defending our ocean. So this exhibition, in many ways, is in homage to them and other customary rights holders and indigenous knowledge holders. It is trying to surface the intangible heritage of the ocean that often doesn’t get considered.” Dyl continues.

As Dyl took me through a walkabout of the exhibition, propped alongside the Rhodes University Drama Department (in the Red Room), it was clear that it remained true to the Art’s Festivals 2022 tagline: “it will change you.”

The exhibition relocated the fight for the protection of the ocean from something which was strictly western scientific and positivist in rhetoric, to something rooted in the spiritual role the ocean plays in the lives of much of South Africa. 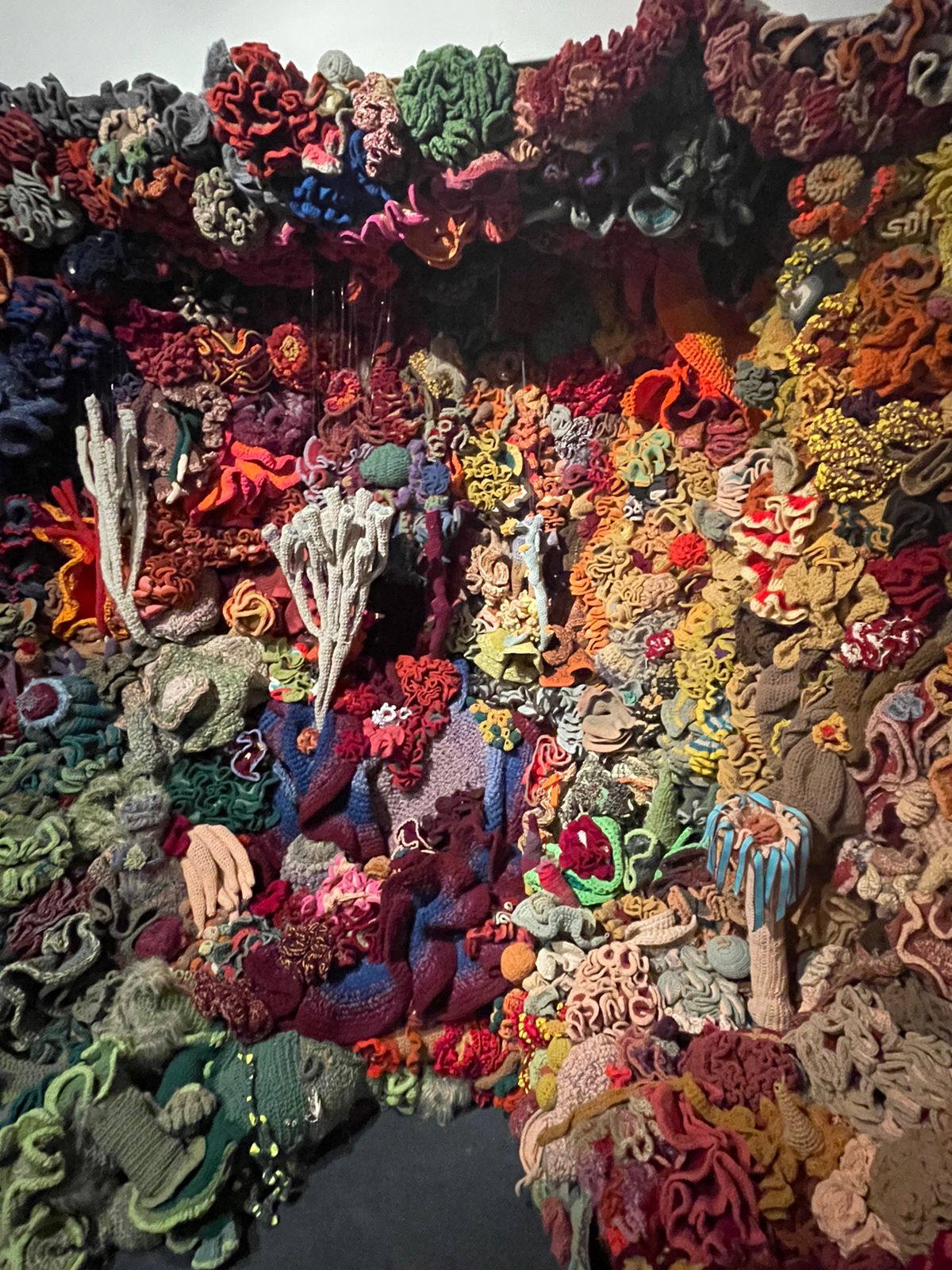 Often times, the only argument for the protection of the ocean’s cleanliness looks only at zoological considerations of the ocean’s life. It was a view like this, where it was argued that the seismic mining and mapping by big corporations was affecting the lives of the whales, that failed to win the first indictment.

This exhibition responds to the tensions over the ocean that fail to recognise how historical Apartheid policies like the Witchcraft Suppression Act (1957) and The Group Areas Act (1966) severed the link between Black and Indigenous people and the ocean, under the guise of marine conservation.

In a domino effect, those same voices have for too long been ignored. Artists, representatives from organisations, researchers, and activists came together to create “a new archive,” as Dyl put it, that “archives our spiritual and cultural history around the ocean.” 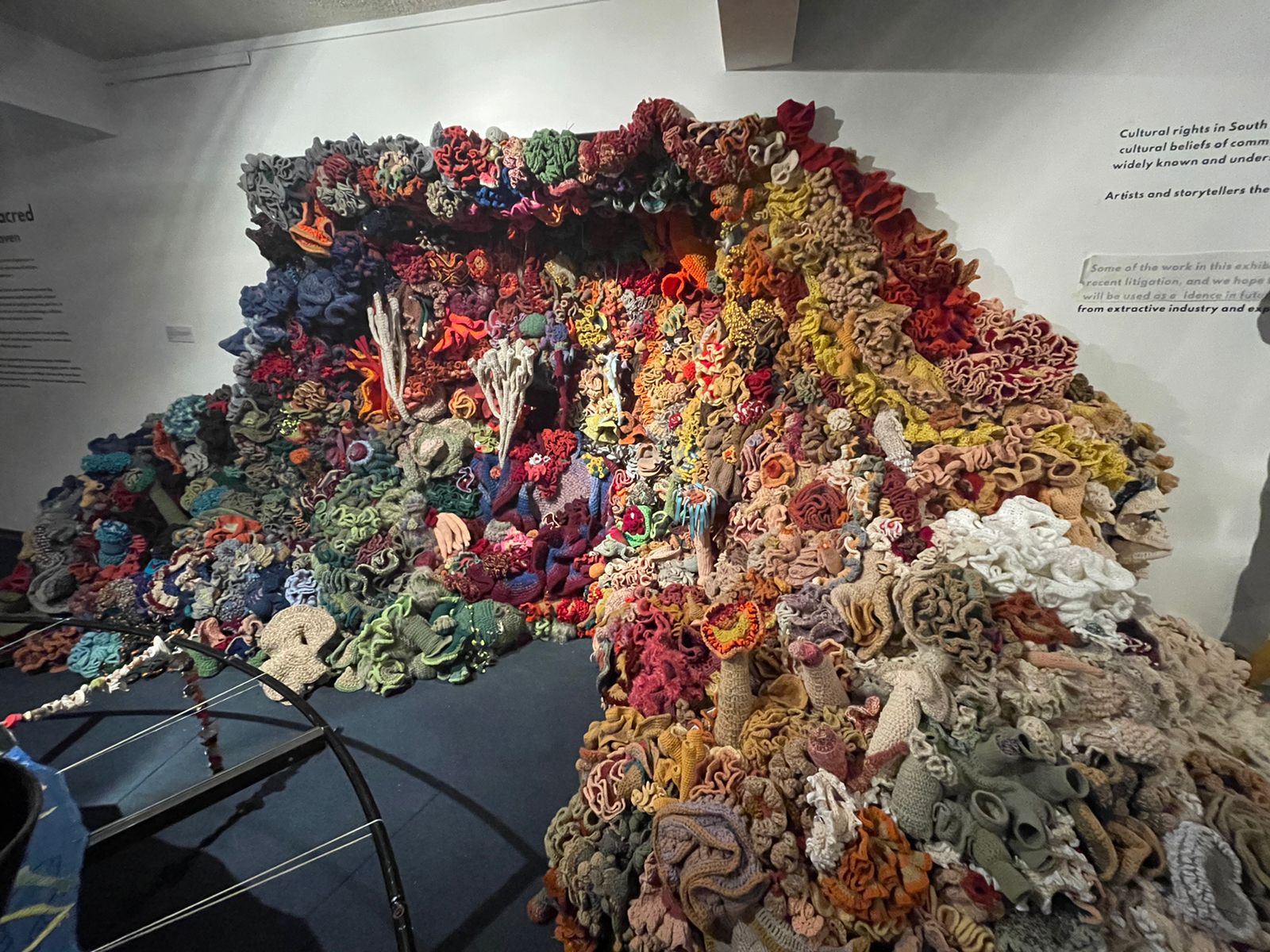 The contributions of the artists help to make the spirituality of the ocean more tangible. As one enters the exhibition spaces, a massive crocheted coral reef comes to life on one of the walls, requiring reverence. It is loud, bright, and demands respect, just like the lives it represents.

At the centre of the room is a large, spinning tapestry, created by the Kaskama project, depicting a community that lives not alongside, but with the ocean. Our sacred ocean, is the name of the tapestry, which also resounds with the exhibition’s names.

It depicts the Eastern Cape coastal community of Hamburg. In it, ancestors are depicted living under the sea. The community performs traditional ceremonies and lives off the sustenance of the ocean. The vivid colours and various patches of fabric are proof of life, and how life is given back to us by the ocean. 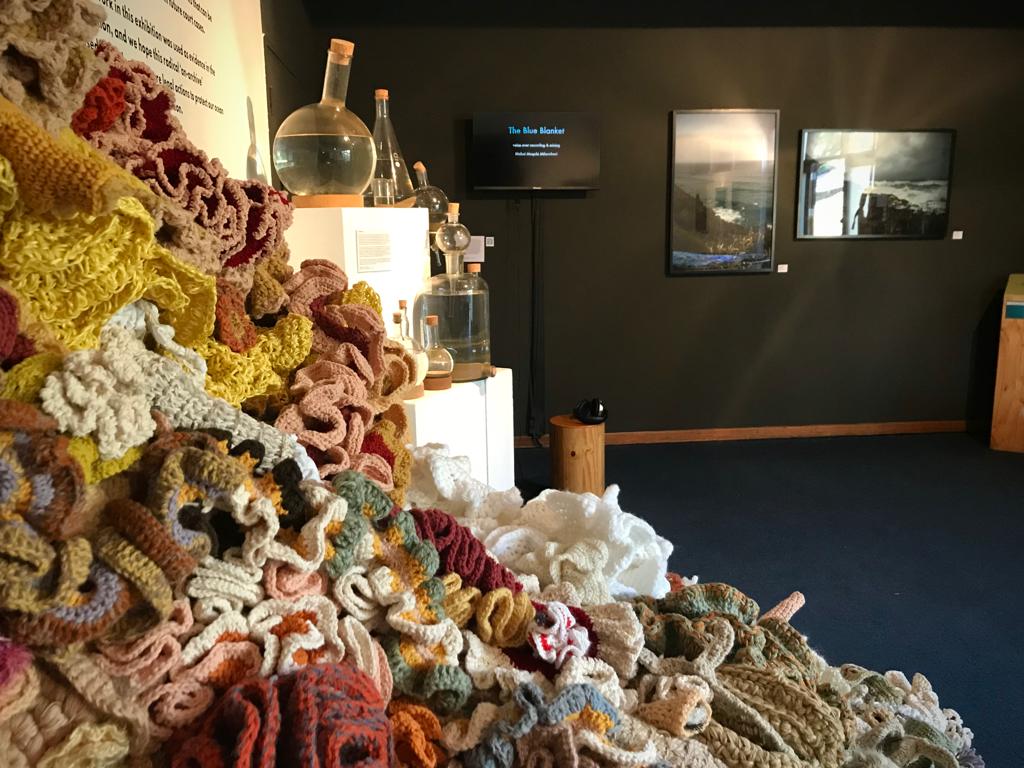 Mere steps away, the larger-than-life crocheted coral reef looms over and around the tapestry. Dyl explains that it is a project started by two American mathematicians who sought to display the pattern of the universe – hyperbolic geometry.

It is supposedly how the universe looks as it continuously expands. This expanding surface area that folds in on itself is seen everywhere in nature, from lettuce and cabbage to the coral reef. Twin sisters in Berkley, California, discovered that they could crochet the phenomenon.

“This also led to a project of warmth work. A project of trying to stay close to and tend to the climate grief that was happening,” Dyl explains. “If you move across the colours, it starts to bleach. If you follow to the end, it’s bleached white. Due to acidification of rising water temperatures and global temperatures, and more carbon monoxide in the water, you have this bleaching of the coral reef. So this is a project of staying with the dying ocean and staying with the climate grief.” 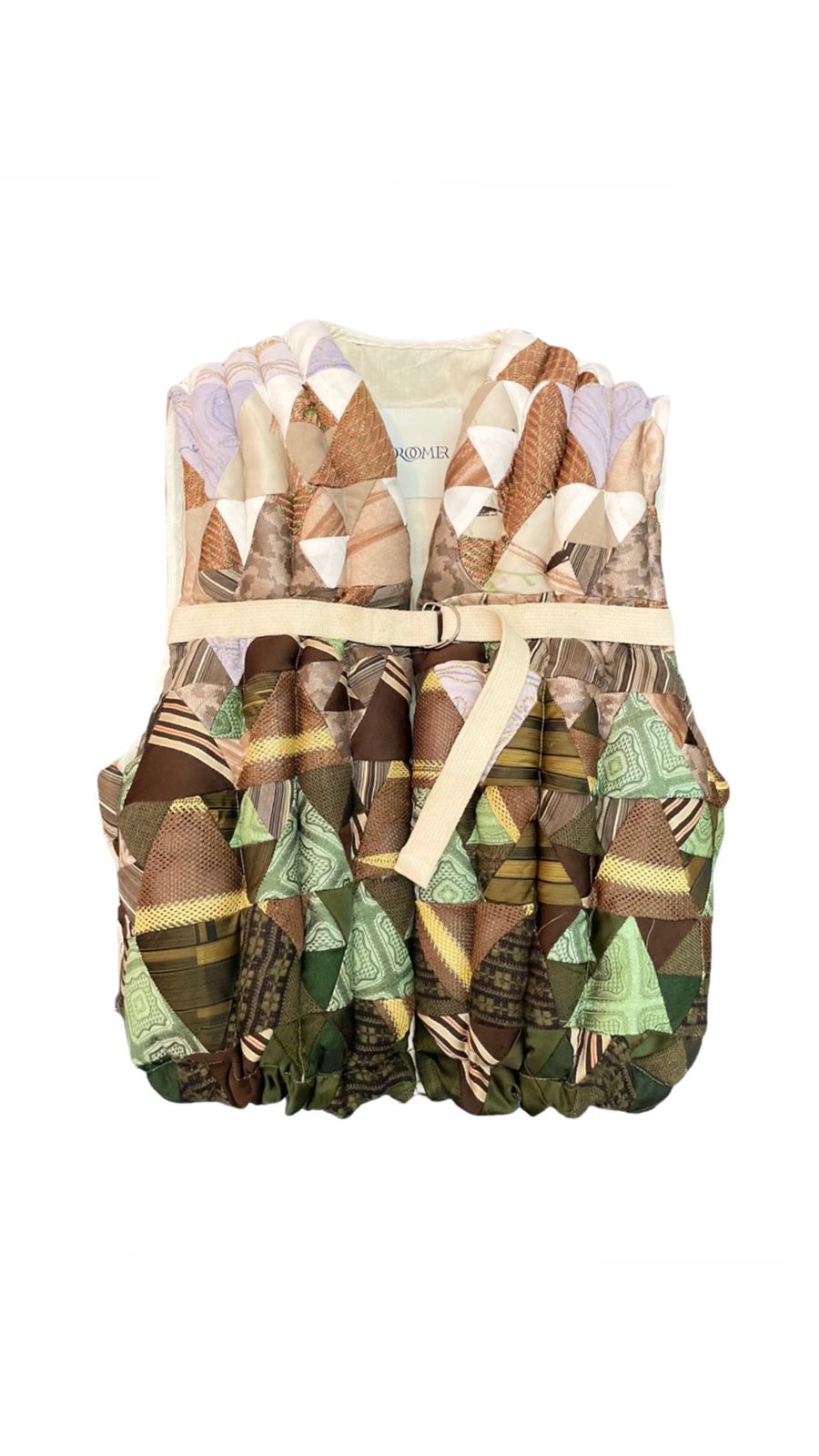 Its building has been unfolding for the past 12 years, with ordinary citizens from across the country adding to the monument. From children to scientists, everyone’s hands moved in the same motion, toward the same goal. What stood in that foyer wasn’t even all of it. Climate grief unites us, and, like the hyperbolic geometry pattern, the grief expands and folds in on itself.

This beautiful scene is land barred from its rightful owners, i.e., the members of the Dwesa community. They’re barred from their land in the name of protecting them from the dangers of the water, such as crocodiles and sharks. 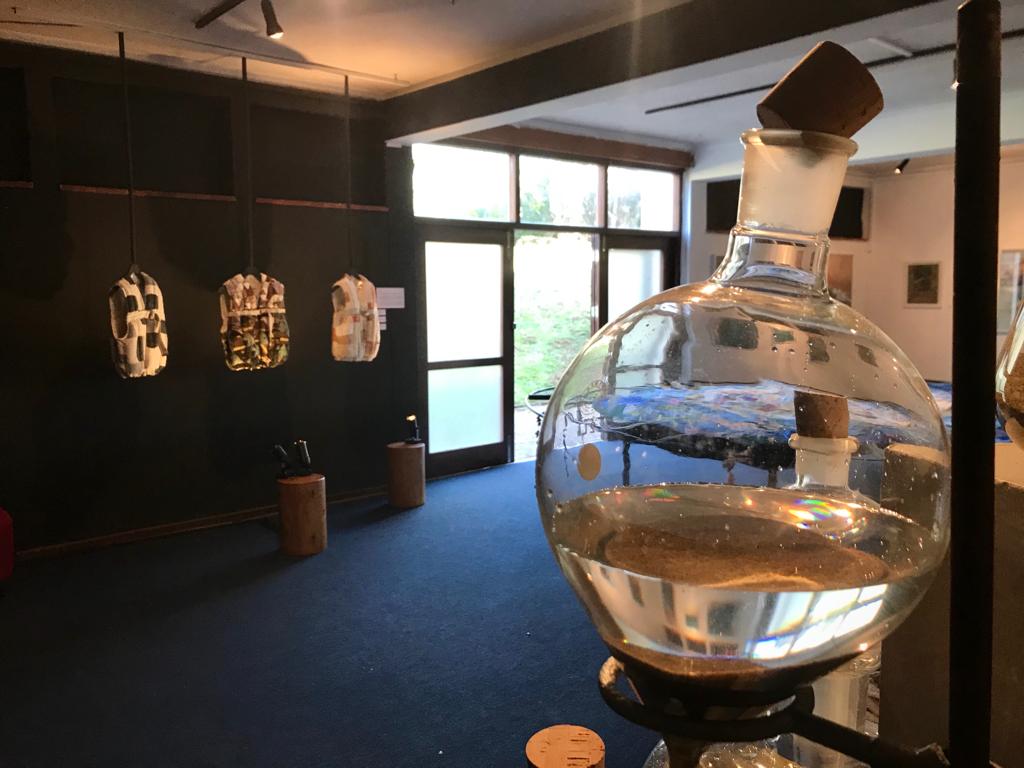 Droomer, following on the theme of fear (although actually experienced, and not told to experience by the government), presents lifejackets made of heirloom materials from his home. One is sewn together by patches of his grandmother’s grandma-chic materials. One is a lifejacket of his grandfather’s ties. And one is all of his own material, as a designer. The three pieces are a plea for global organisations to recognise the ocean as a site of the memorial, for people of his heritage who saw their deaths on slave ships.

“What these lifejackets serve to do is to pose a question to international authorities like the International Seabed Authority and UNESCO, to say: can we regard the ocean as a sacred resting ground for ancestral graves, as Auschwitz is, as the Killing Fields of Cambodia are?”

The questions — like the water — continue to pour out. 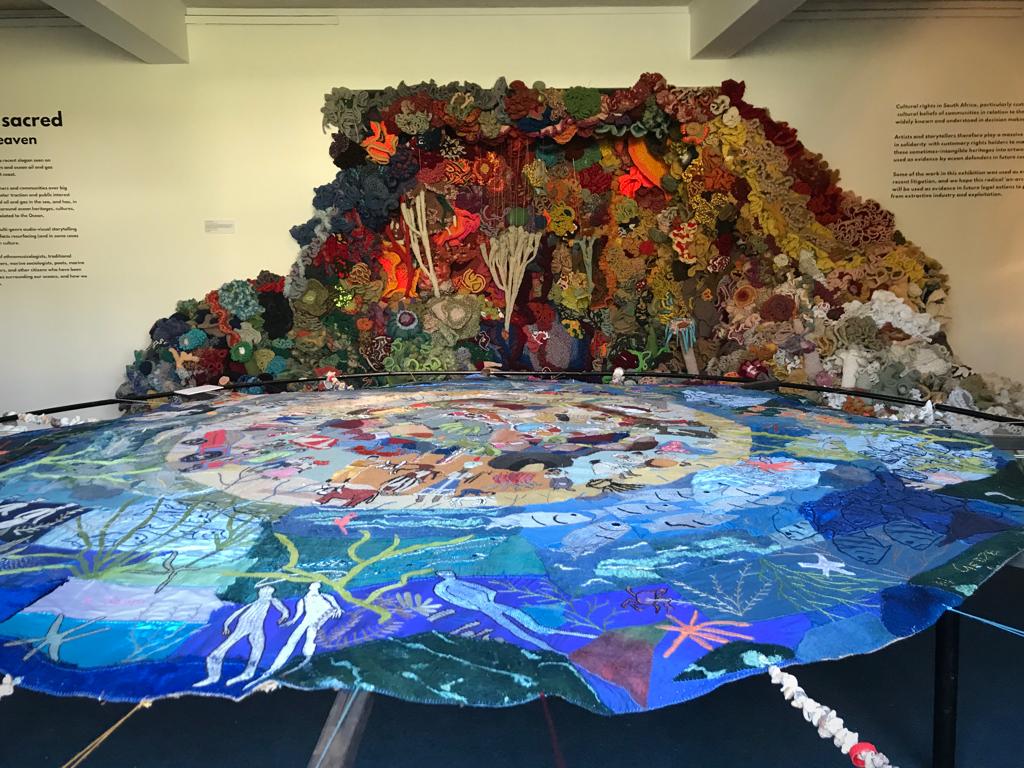 All of them ask for the ocean to be seen as it is: a sacred place, of deep and historic spiritual significance? The questions have been heard, with some of the pieces in the exhibition acting as part of the evidence in recent court indictments regarding ocean tensions. But Dylan, backed by the support of many artists and the ordinary work of thousands of people across South Africa, aren’t done with asking questions.

The exhibition moves in July to Zero Gallery in Cape Town – on the walking path of many lawyers walking to and from powerful fighting grounds like the Parliament building. Inside, more space will be made for more films, more fishers, and more lawyers who see the fluidity of the law.

The hope is that as those with the power to challenge the evidence hierarchy walk through the loud and busy city streets, a growing rumble might be heard. A rumble, which is the united voices of even more artists, who join the choir that sings an honorary song: Our ocean is sacred You can’t mine heaven. 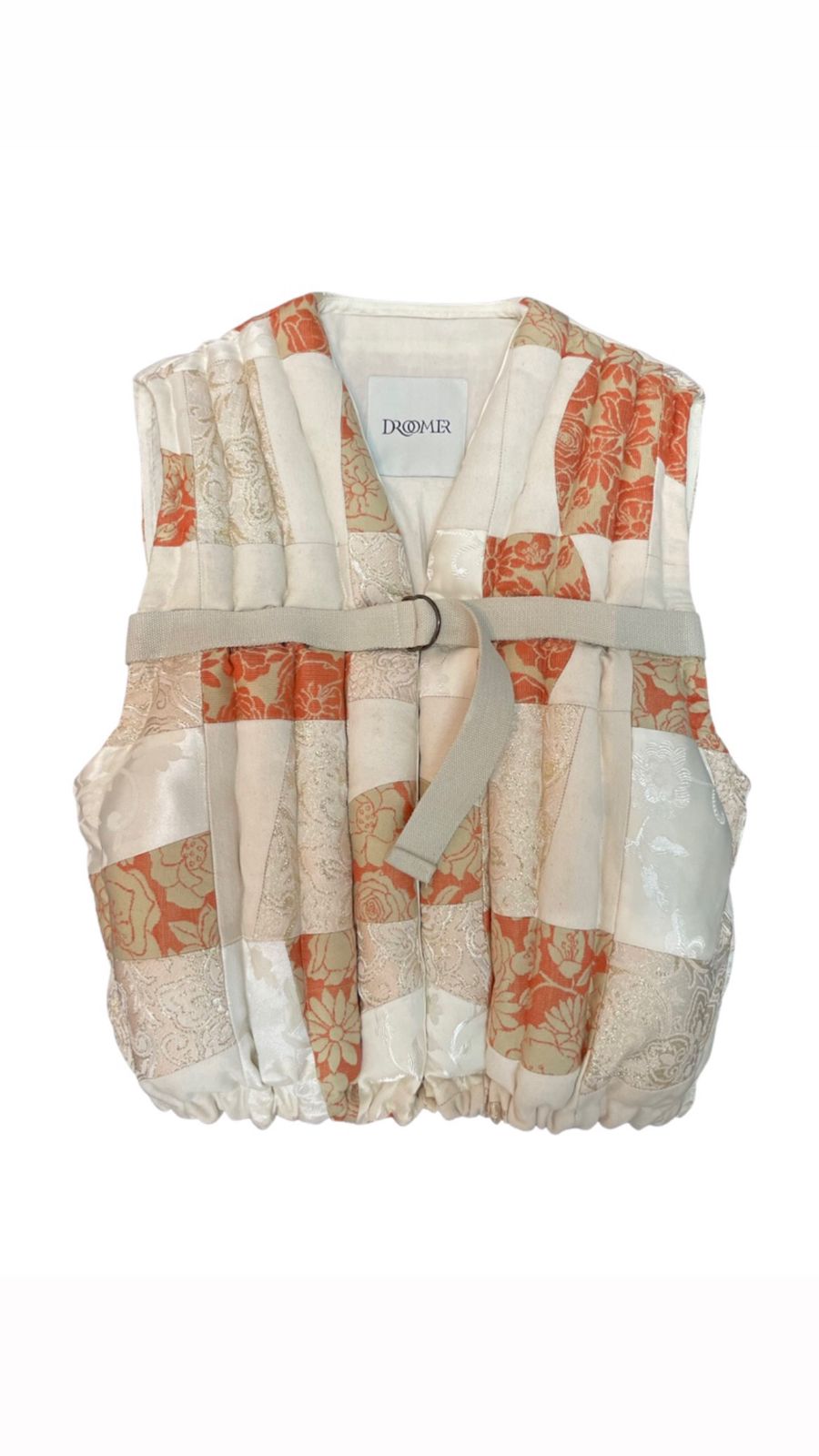 *Dylan McGarry gives special thanks to the many contributors to the exhibition, and the support of:

As well as the funding from: