As a gift from the Surf Ghana Collective and Wonders Around the World to Ghana’s booming skate scene, the Freedom Skatepark Ghana opened its doors to the public as Ghana’s first skatepark in December 2021.

Nestled within lush bushes in Shiashie, under the shade of tall palm trees just off the side of one of Accra’s many busy streets, the park offers a space for the local skate community to safely participate in the sport, connect with one another and even grow as skaters and individuals.

Over the past few years, Ghana’s local skate community has experienced steady and rapid growth with the youth and adults alike using the sport as a way to express their freedom, relieve frustrations and make connections with a community of friends and chosen family. 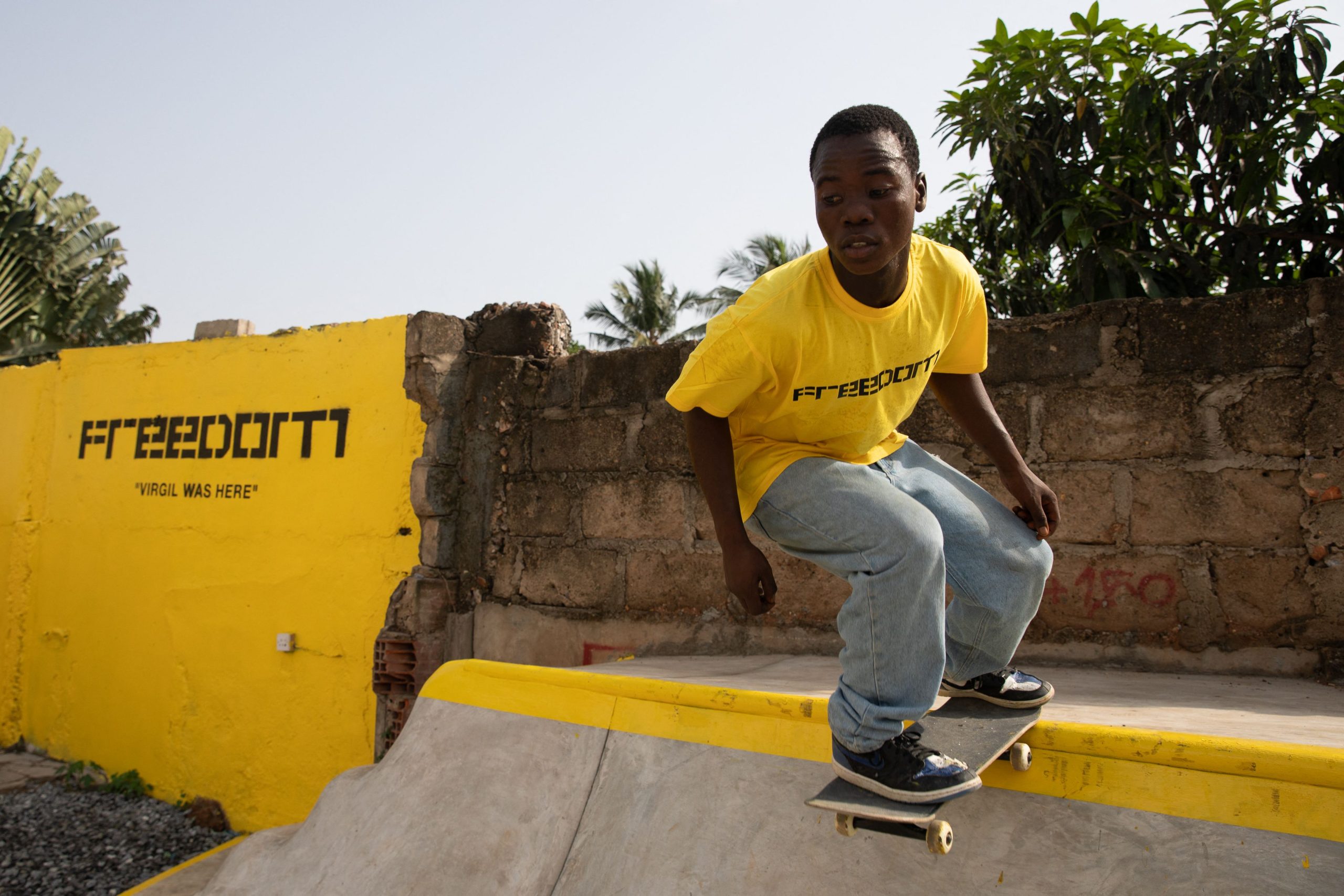 While this relatively new community continues to expand and blossom into a force with the region, continent and world at large, skating infrastructure is sorely lacking. The roads in the city are incredibly busy and quiet streets tend to have rough ledges, open gutters and bumpy pavements.

Oftentimes, local skaters create their own spaces by transforming locations with flat surfaces into temporary, modular skateparks with tyres, wooden planks and moveable wooden ramps that skaters can shift around for different tricks and placements.

The founder of Surf Ghana and Freedom Skatepark, Sandy Alibo, spoke to Vogue about her vision for a skatepark in 2016, after she encountered the local surf and skate scene and felt the need for a space that both captured the importance of and need to contribute to the movement.

To Vogue, Alibo noted, “I know what skating can do for the youth.. It makes kids forget their problems. No drugs, no violence. Just one goal: Learn the tricks; do the tricks. It’s a family.” 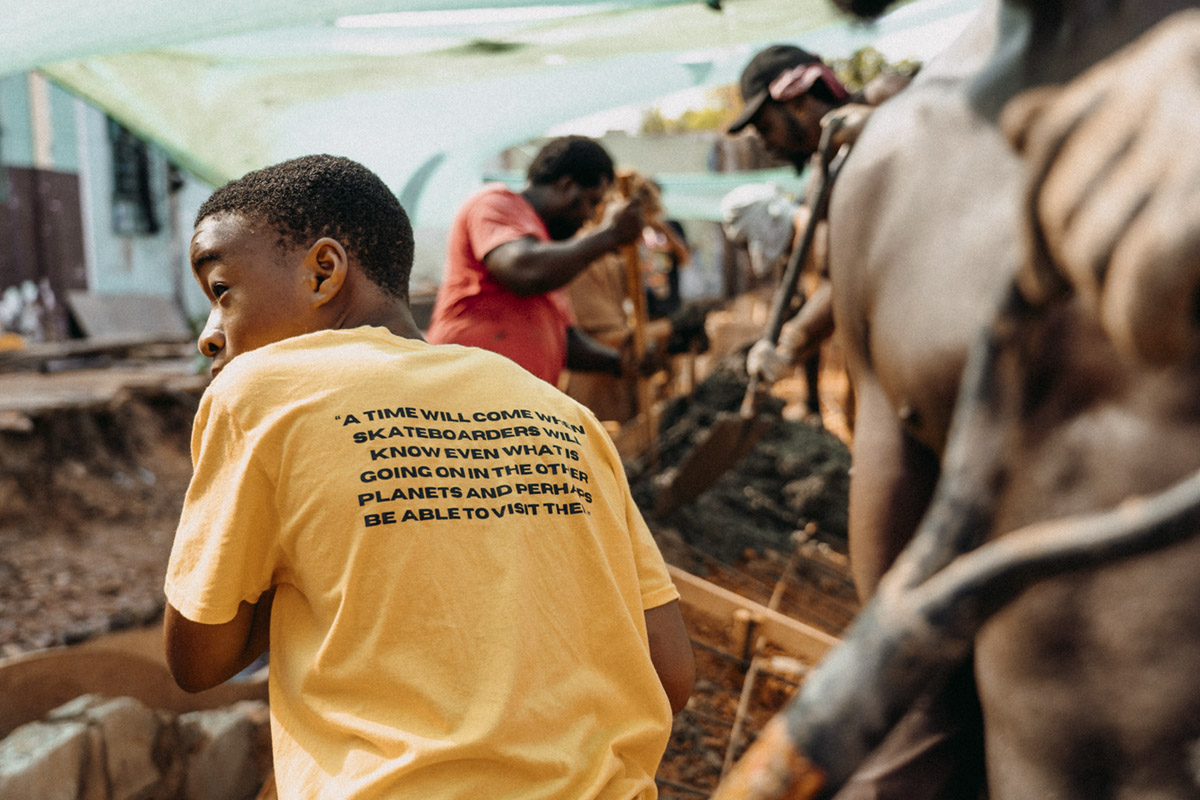 In an effort to build a space that the local skate scene deserves, a huge community of people and organisations came together to make the park a reality.

From the Pan-African brand Daily Paper, and the late, great founder of Off White and former creative director of Louis Vuitton, Virgil Abloh – among many other local and global names and organisations – to the people themselves who contributed to a crowd-funding initiative, Freedom Skatepark Ghana was a gift of the community to the community.

With no entrance free, the space is open for all. More than the park providing a space for communing and growth, it also offers skaters a space for them to express their own individuality, independence and freedom.

Freedom is an inextricable part of skate culture – the sport is known as a symbol for rebellion, youthful expression and independence. Its ability to represent a community, movement and even collective mindset, while still speaking directly to independence and individuality is part of the sports allure. 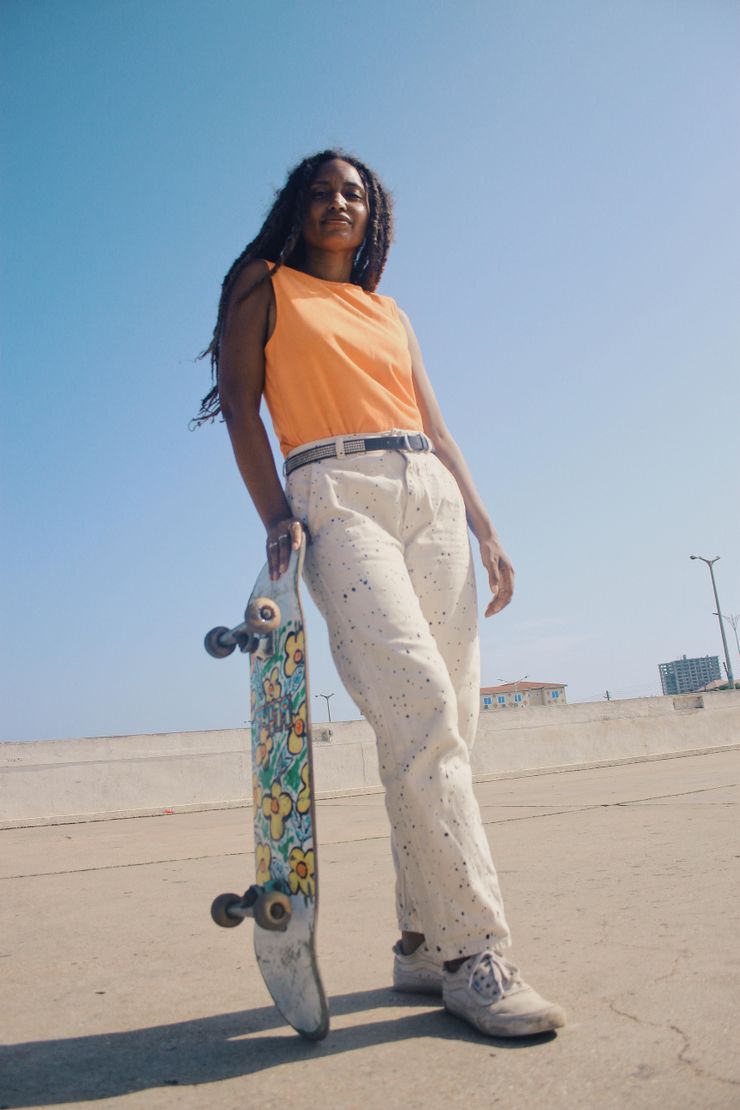 The space – designed by Accra-based spatial design studio Limbo – pays homage to the sport’s propensity to facilitate release and liberation with the Adinkra symbol, Fawohodie.

Enlarged and painted on the park’s cement plains, Fawohodie – which represents independence, freedom and emancipation – acts as a reminder of the space’s purpose and the sport’s essence.

Fawohodie is taken from the Akan phrase, “Fawodhodie ene obre na enam  which when directly translated means “Independence comes with its responsibilities”.

I feel this statement perfectly embodies the ethos of Freedom Skatepark Ghana, as the park offers both the opportunity for self-expression while being a source of opportunity and growth in the local community. 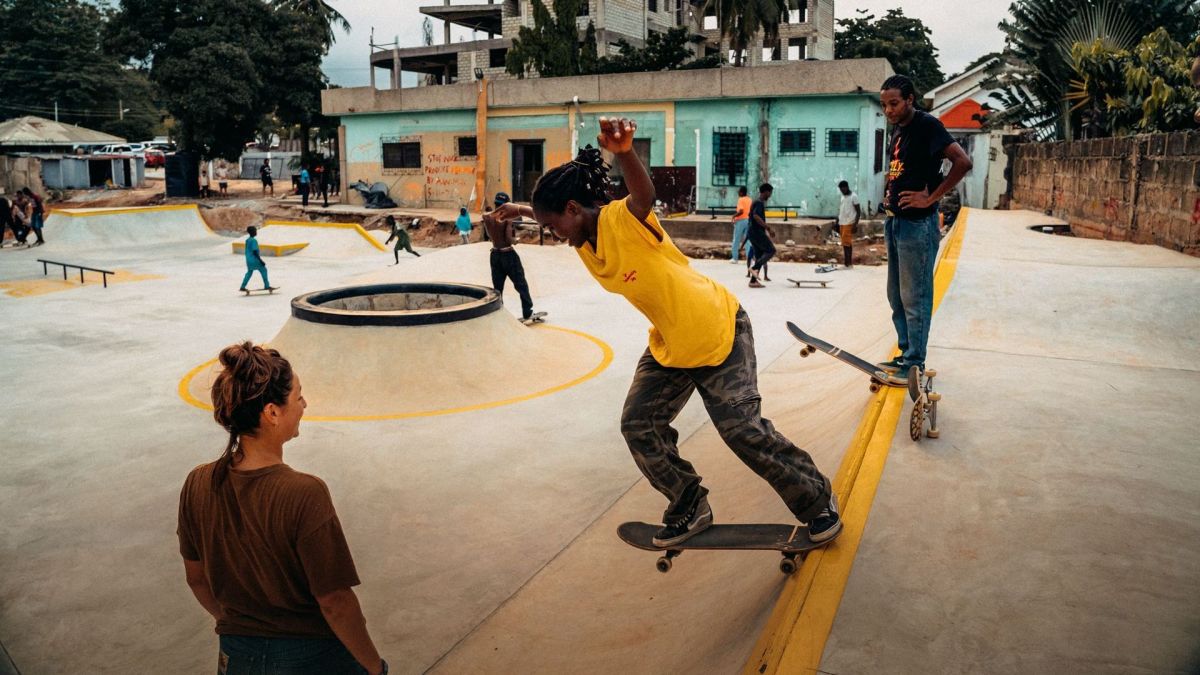 The park employs the local youth, giving them opportunities to learn while earning money. It also offers women-only training and skate sessions as a means to combat and correct the existing gender disparity in the sport both locally, regionally and internationally.

The space is set to expand in the first quarter of 2022 with the second phase in its works.

The expansion will introduce a Wi-Fi Cafe – where guests can gather, work and learn – and a skate shop that will grant the guest access to more boards, brands and tools of the trade. 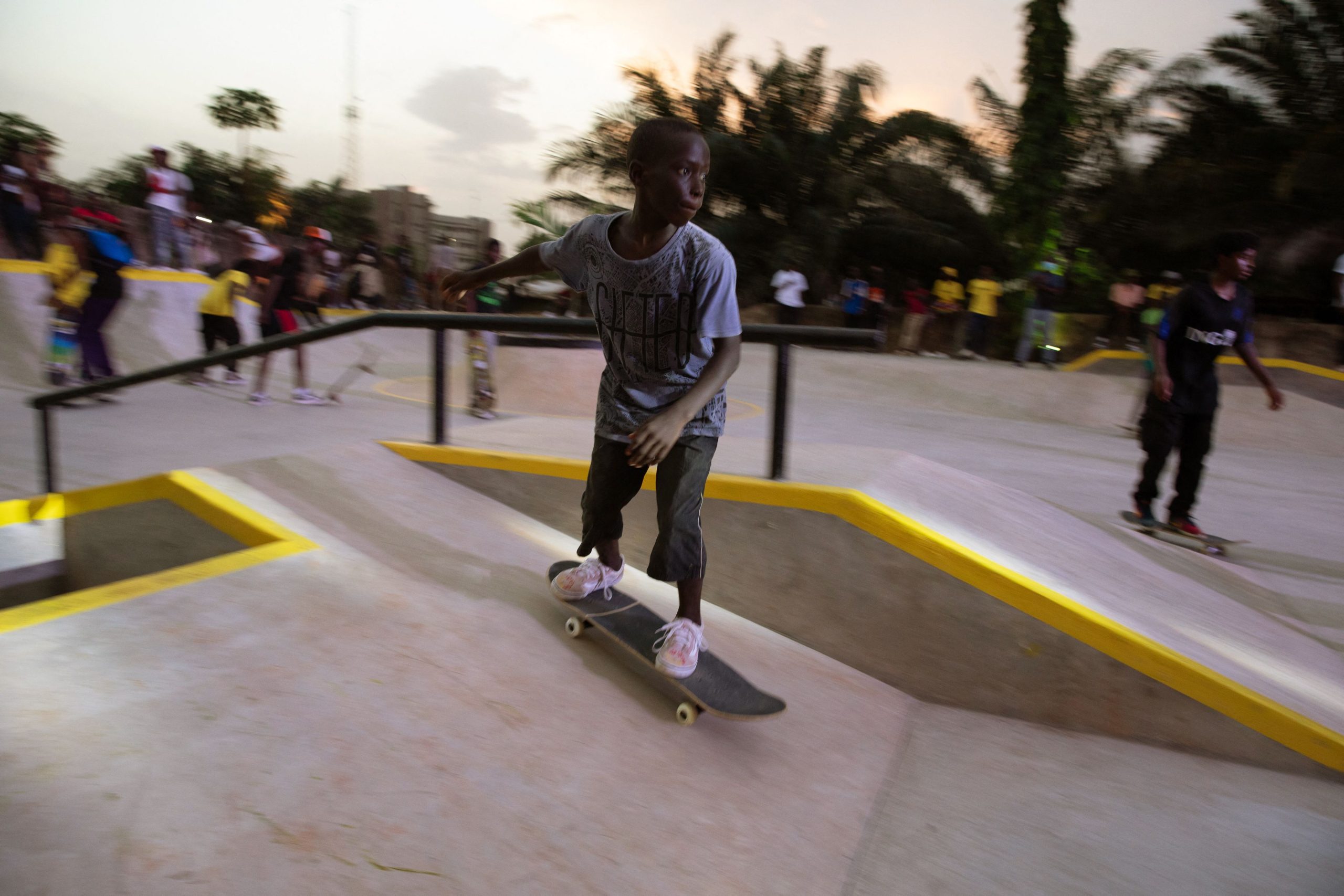 Guests can also expect to attend workshops, art exhibitions, and skate competitions in the near future as the park makes it its mission to provide a space for the community and joyful expression.

With yellow walls, yellow streaks and yellow merch to match, the park exudes joyful expression and proud freedom. Alibo – who is often pictured in yellow herself – revealed on an Instagram story that the choice to make yellow the colour of the park was intentional.

She made the same choice for the same reason with Skate Gal Club – which she founded with Kuukua Eshun – to signify happiness and positivity in the space and to be actively created within the space. 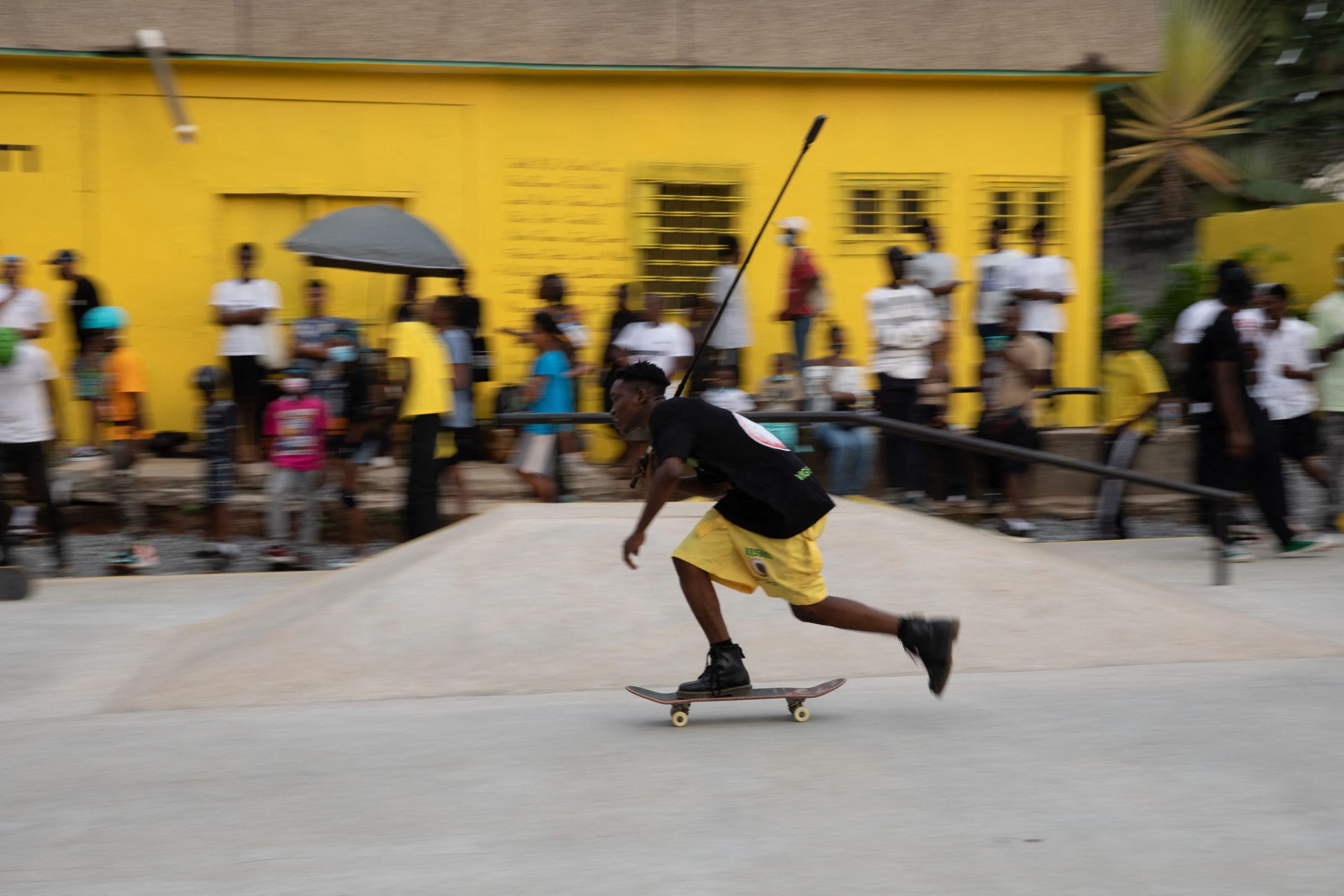