This week marks the conclusion of fashion month across the globe and sees big names like Gucci planning their shows for Paris Fashion Week. For many brands, regardless of size, larger than life visions inspire the collections adorned on the catwalk, with many designers having taken the disruption to the traditional fashion cycle as inspiration on how next to go big in a “post-pandemic” world. So there was something so beautifully quaint about seeing Thebe Magugu himself sit in the company of his mother (Iris Magugu) and his aunt (Aunt Esther) as half of his eponymous brand’s latest show, GENEALOGY.

In the aptly titled virtual show, one half of the screen features Magugu flipping through old photos of his mom, aunt and uncle as they break down some of their looks from the 80s. On the other half of the screen, the SS22 collection is modelled on mute, with the models showcasing the items which pay direct homage to the reference photos/outfits blasted as backdrops behind them. 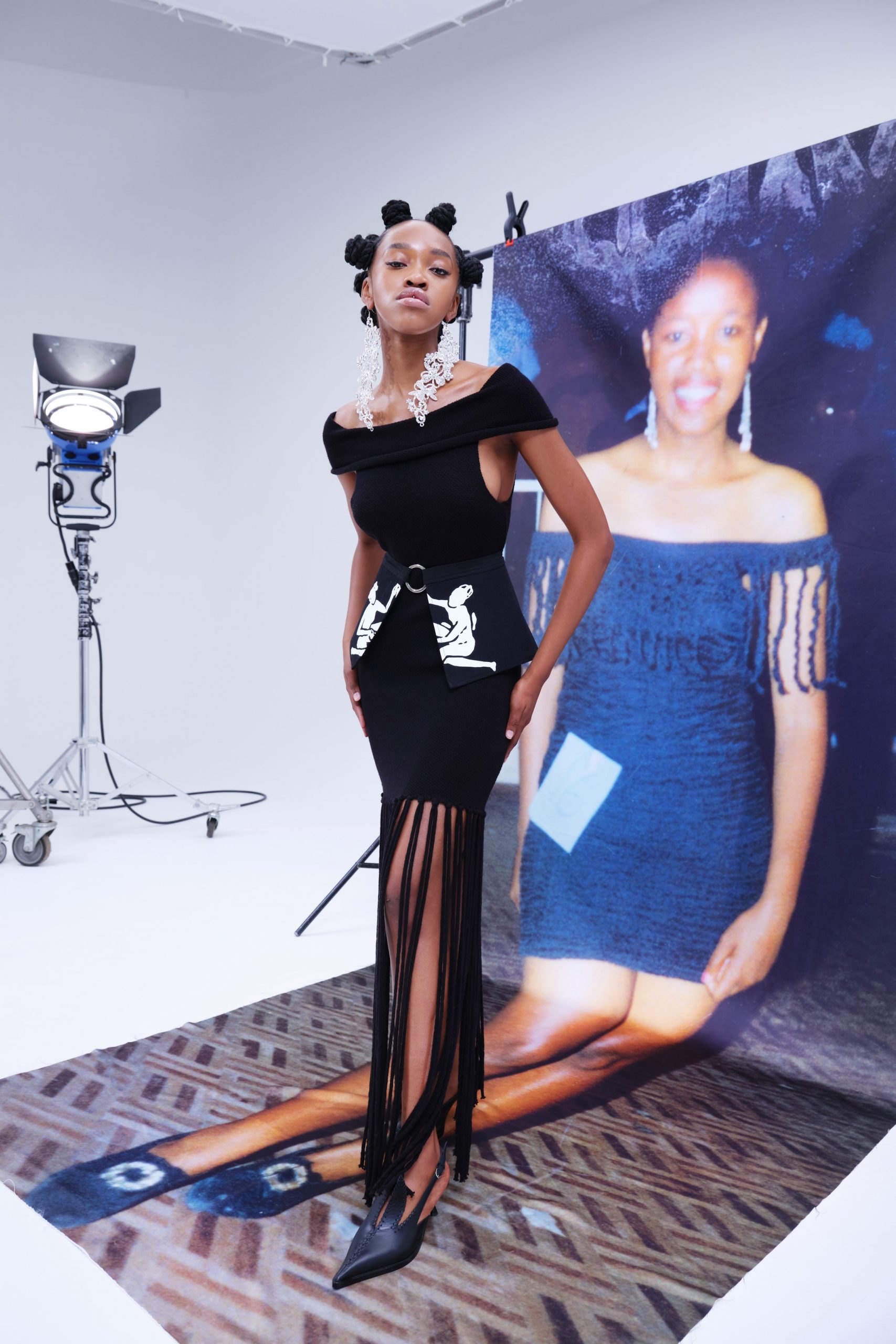 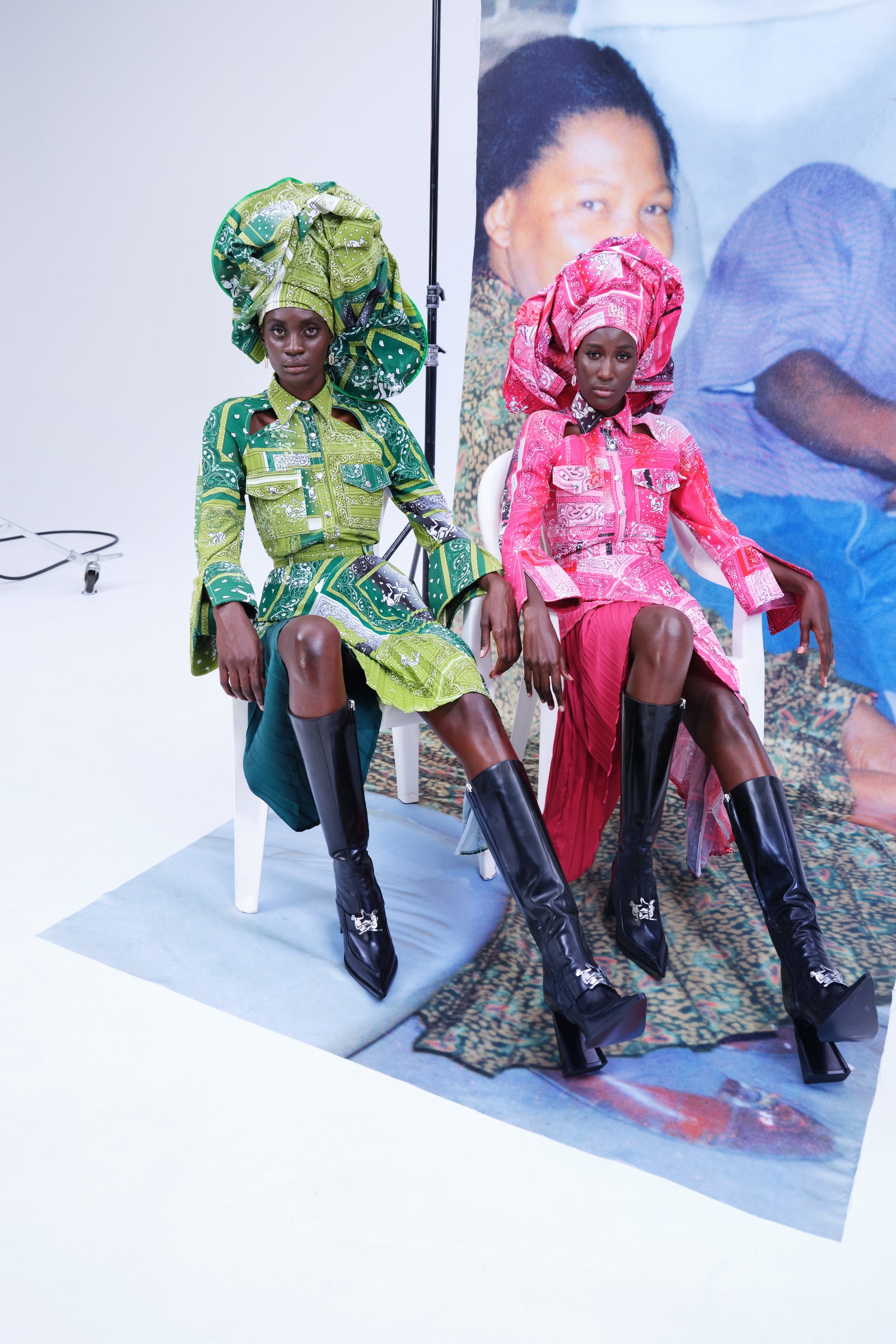 The collection stays true to the brand’s ever strengthening artistic and visual identity, featuring shin lengthed pleated skirts, daring cowboy-esque boots and the bold patterns which have come to shape that identity. Magugu has never shied away from the use of patterns to tell a story, with last year’s SS21 COUNTER INTELLIGENCE show using the fingerprints of a South African spy to form the pattern of one dress from the collection. In this dress, and the collection at large is a historical story of espionage and the femme fatale.

This season reveals that some things never change, as Magugu once again uses fashion as a means for African storytelling. Yet, the change this time is that the story is a lot closer to home. As Magugu looks back on the photos in his hands with his family around him, it’s clear to see in the video beside him how those captured moments have inspired his present. He captures the fun and daring nature of the 80s through large shoulder pads and re-presenting some of his aunts model-worthy monochromatic moments. 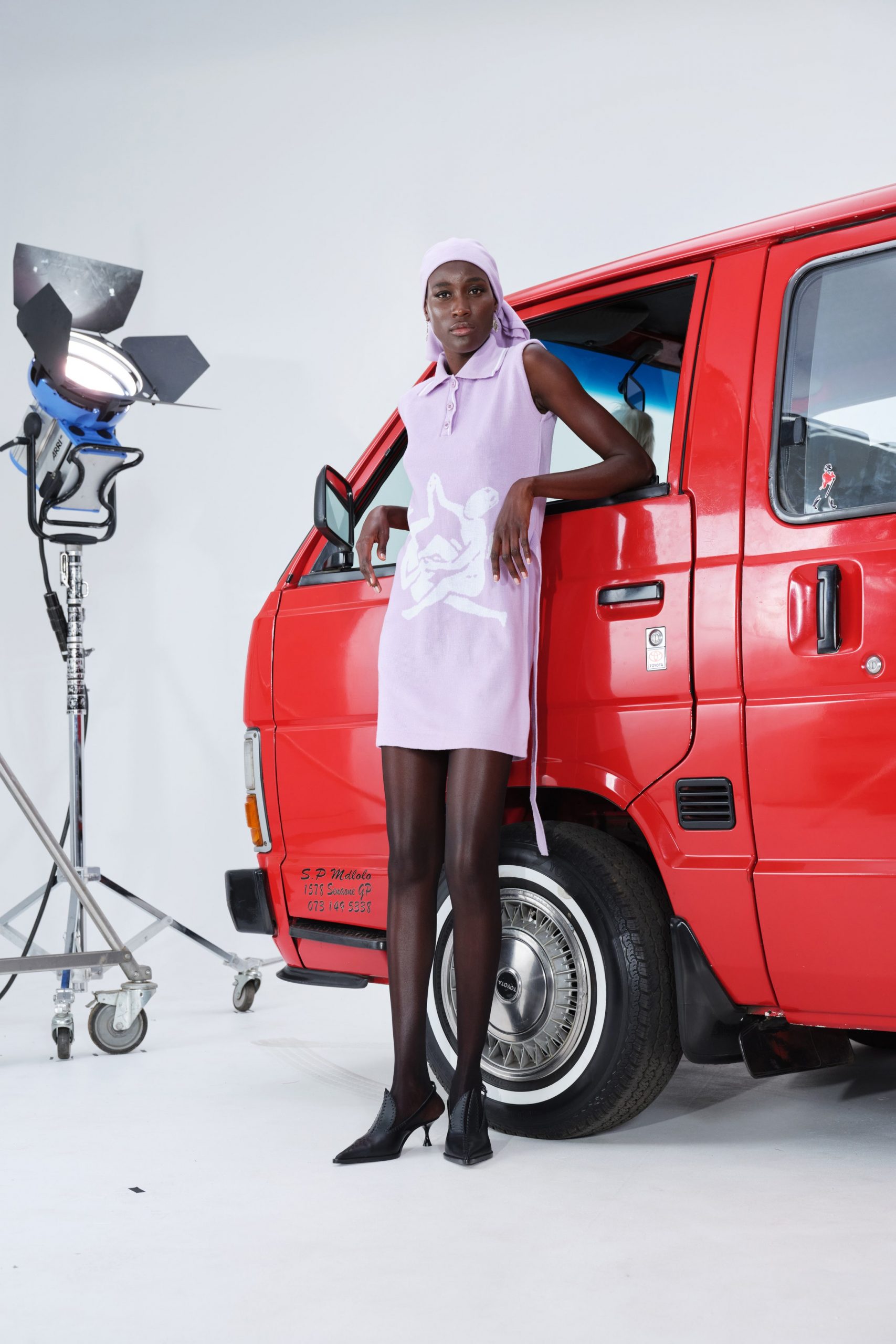 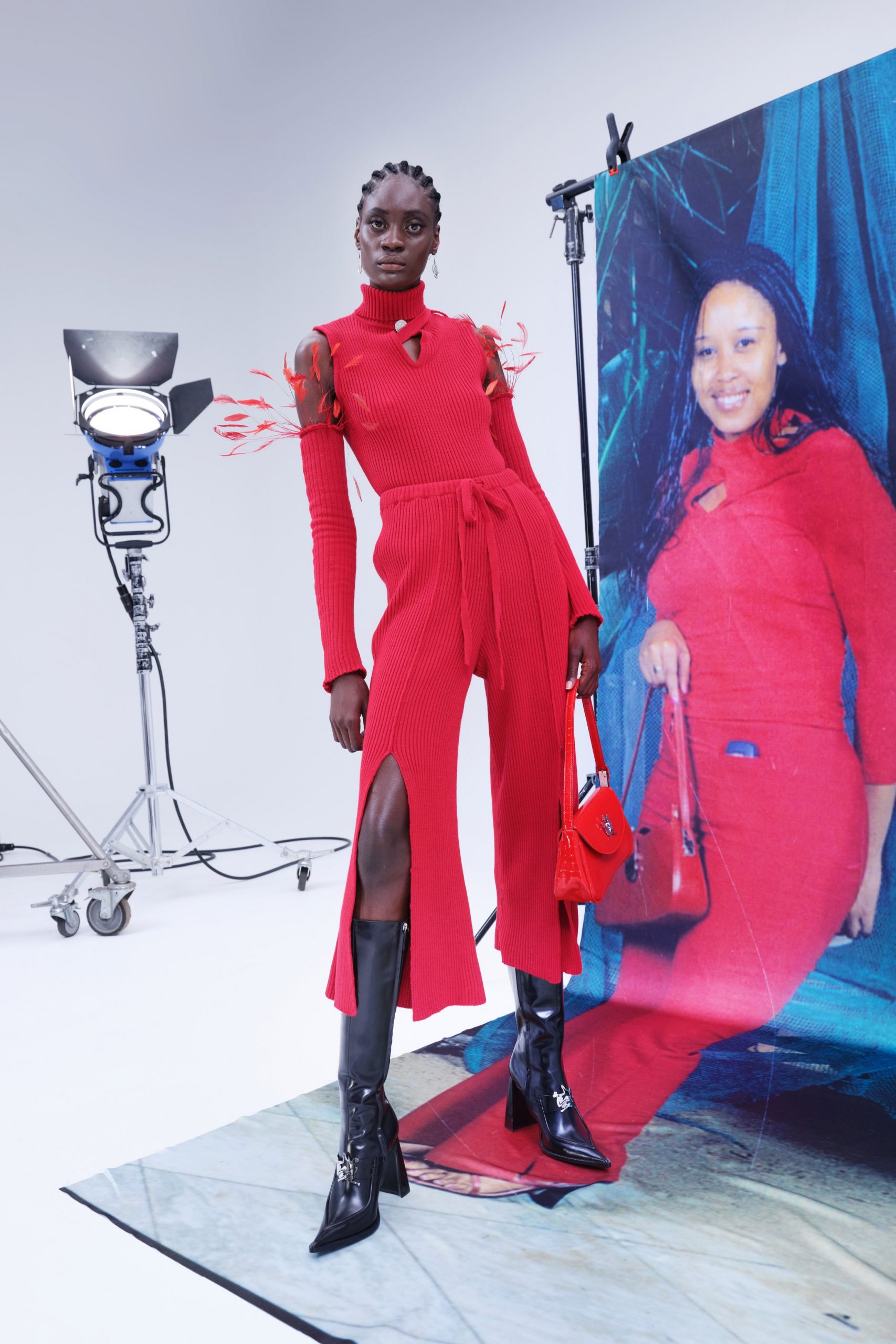 All the while, this boldness remains in line with Magugu’s established route of sophistication. Interestingly, he notes how the looks in the photos remind him of the work of Yves Saint Laurent circa the 1950s because I’ve always felt that YSL’s sleek, sexy wear makes for the perfect assassin wear. This isn’t far off at all from Magugu who has repeatedly imagined his collections in the violence of battlefields and on the sneakiness personhood of resilient spies.

Regardless of their setting, there’s a utility to the collection’s clothing. There’s a utility that becomes so personal, in that it recognises that his true muses weren’t women who spent all their days in the glory of soft living, basking before a camera. As revealed casually through conversation, these were working women who had to wear real people clothes and do real people work. 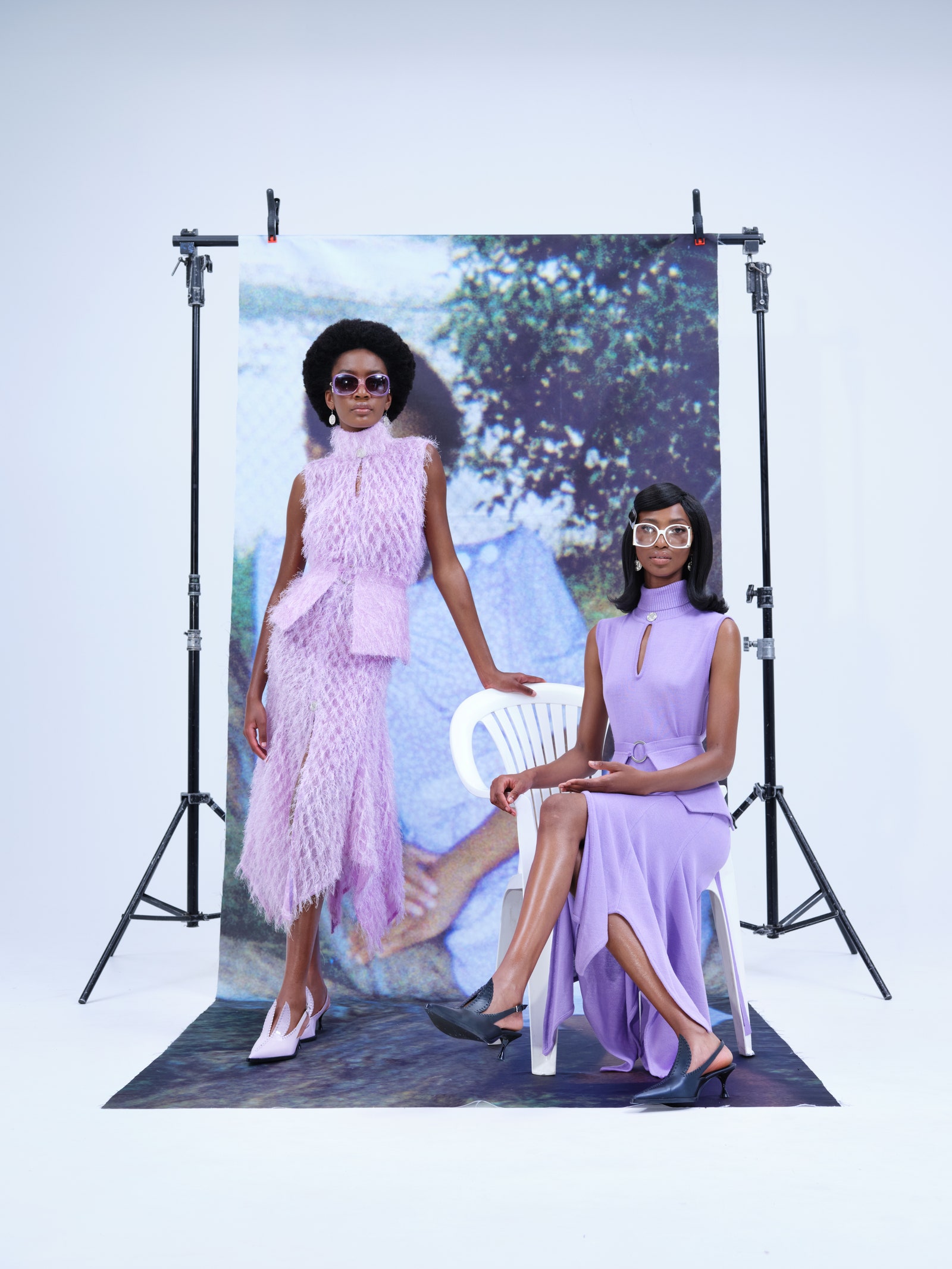 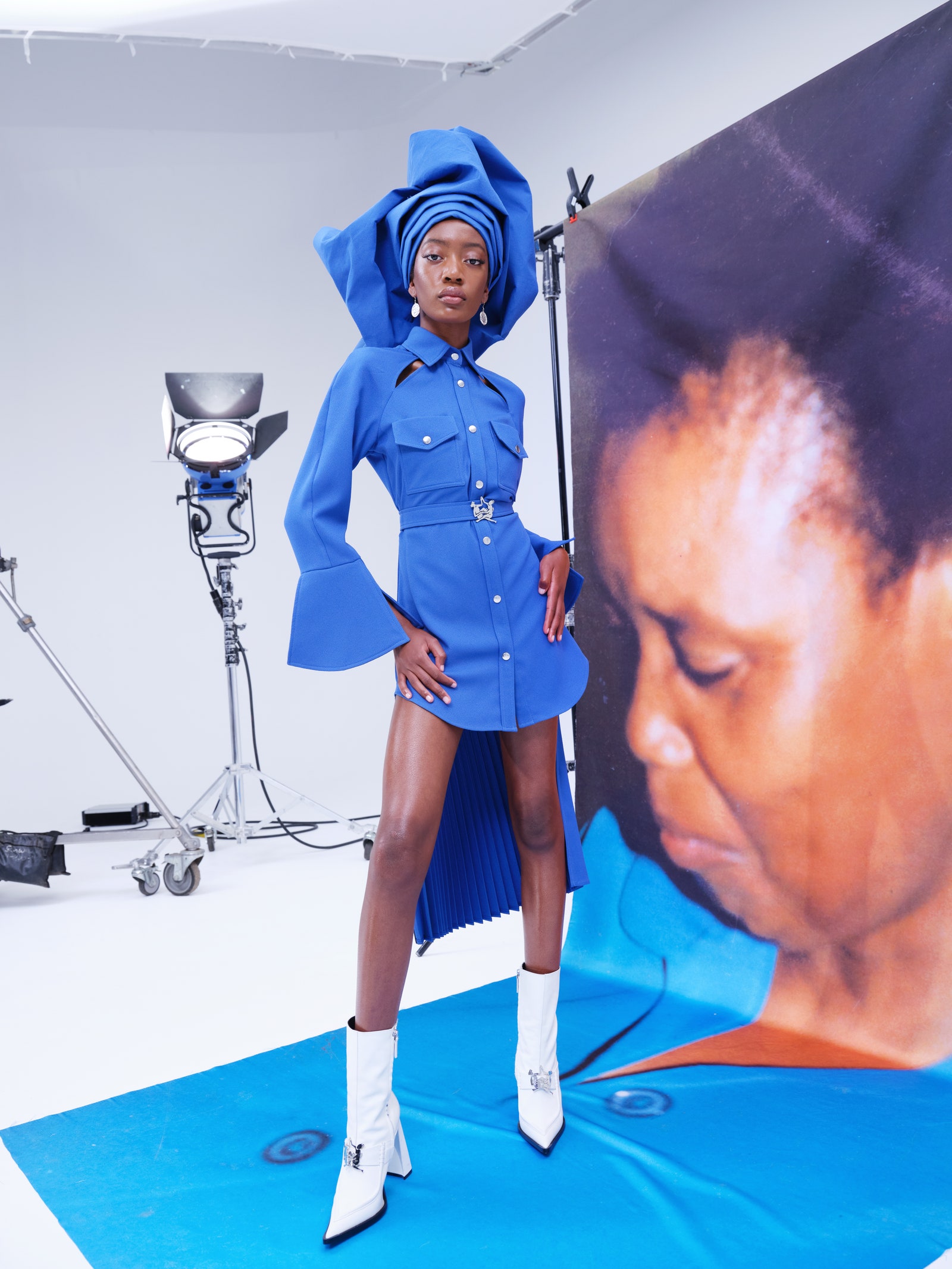 One model even models the clothing while sitting in somewhat of a home setting, on an old stove. In GENEALOGY for all the glamour and sophistication, there’s a practicality and realness. Its corresponding videos showed the talents all hopping out of a taxi in their purple attire, clearly ready to go about their days and do what they need to do. It is truly a vision passed down from parents to child, who then shares it with us all. And that sustainability of the dream is what adds an element of being heartwarming. As Magugu himself notes, “I really love this idea of memory as a reservoir for optimism.” 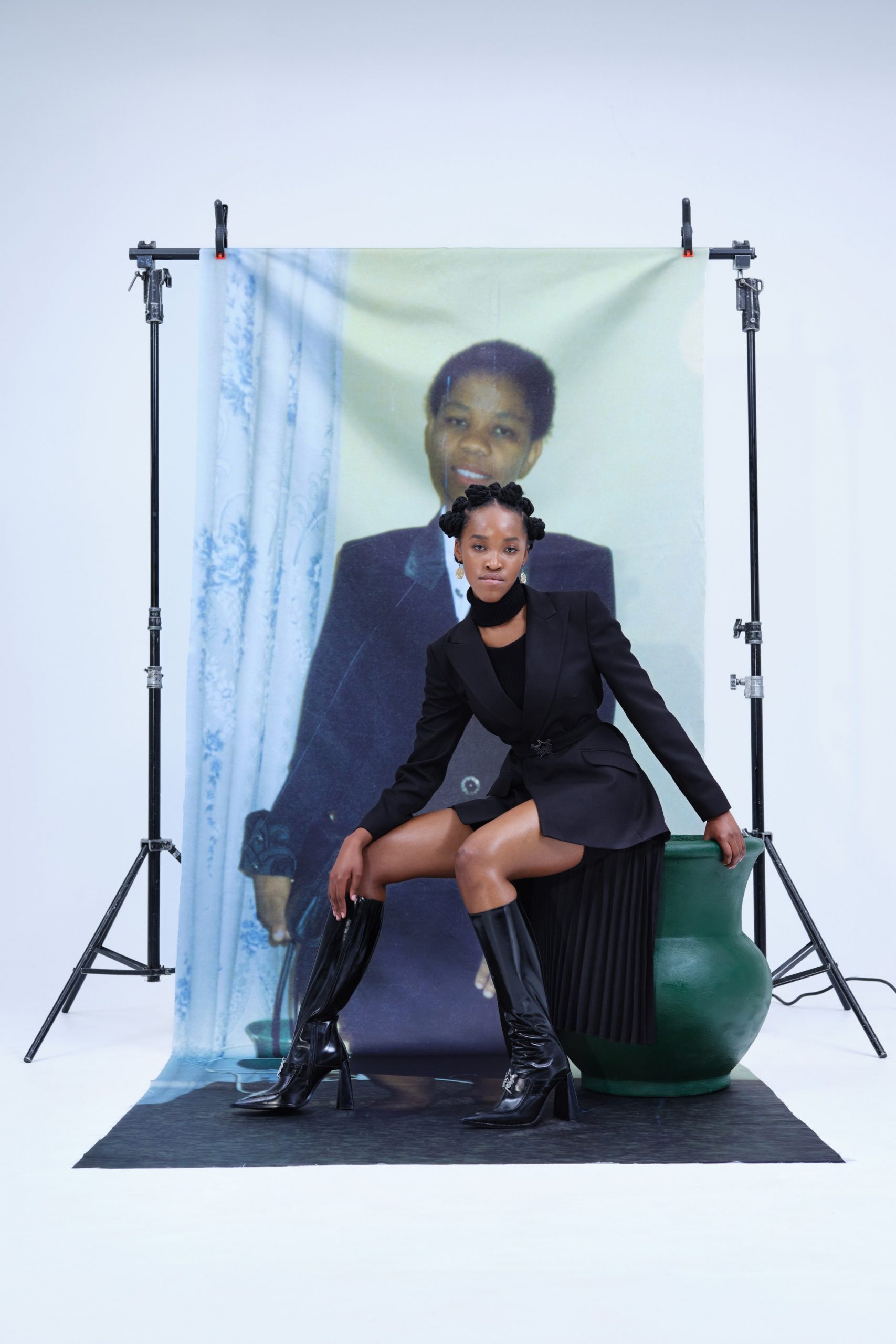 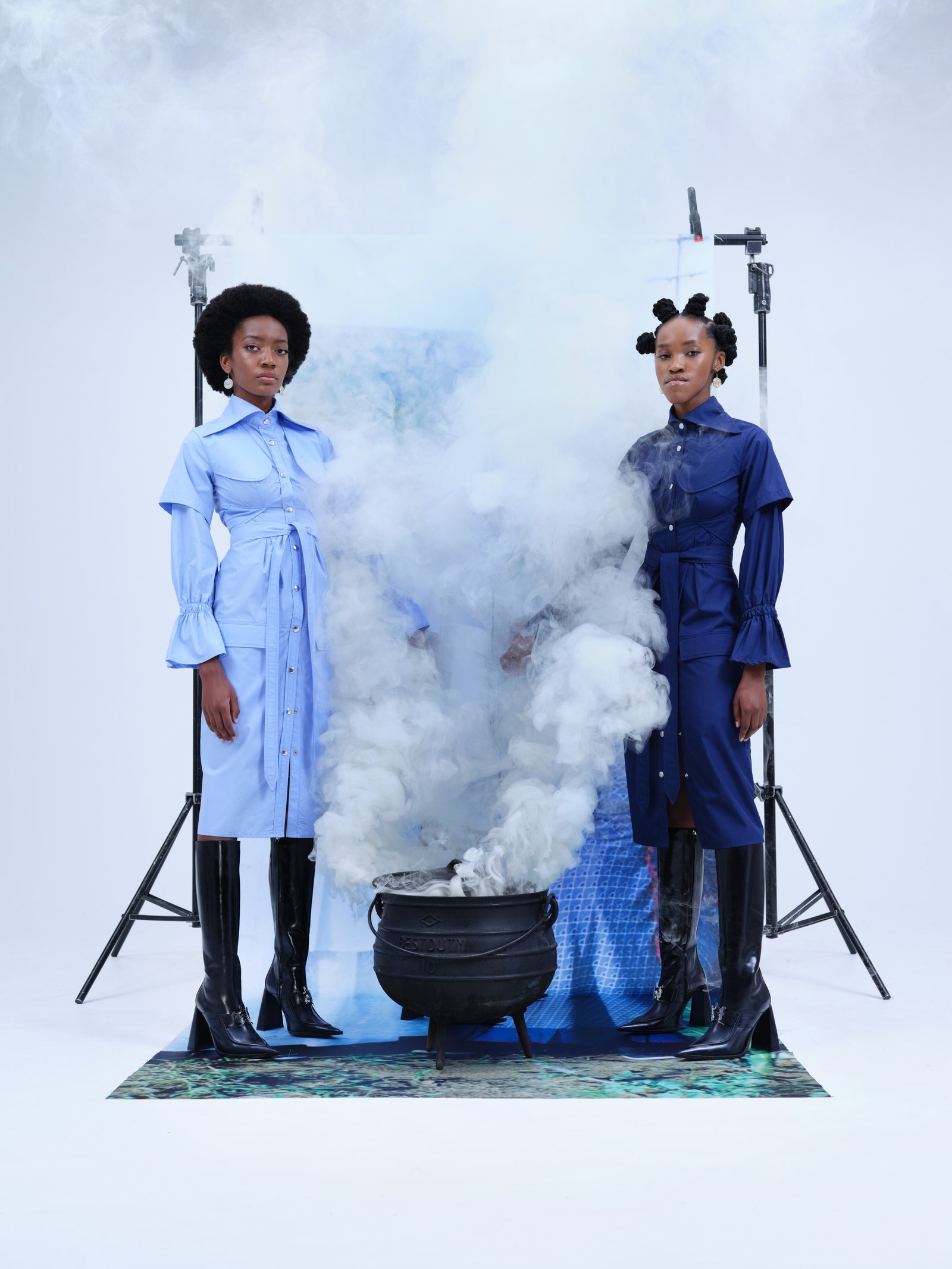 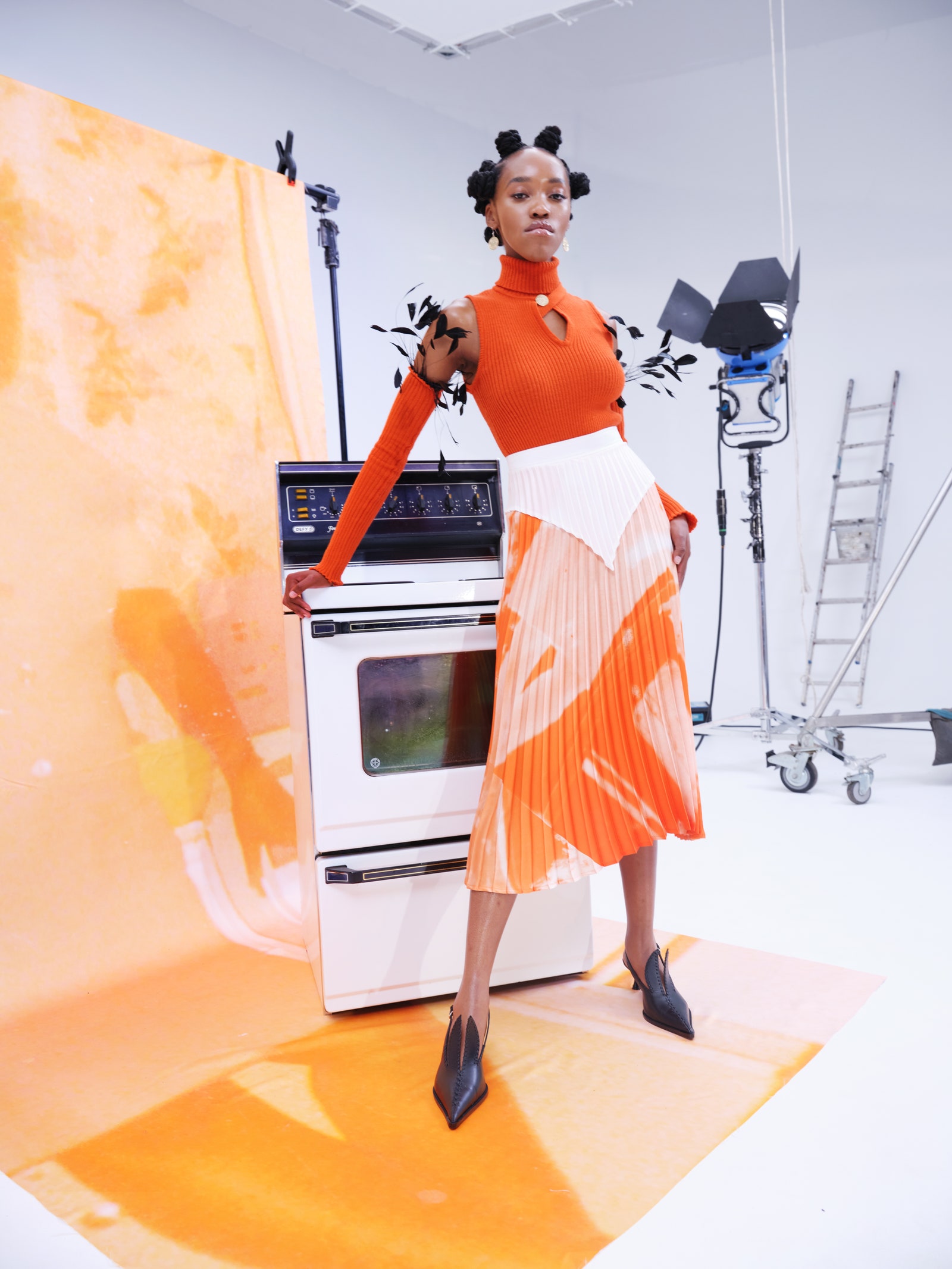 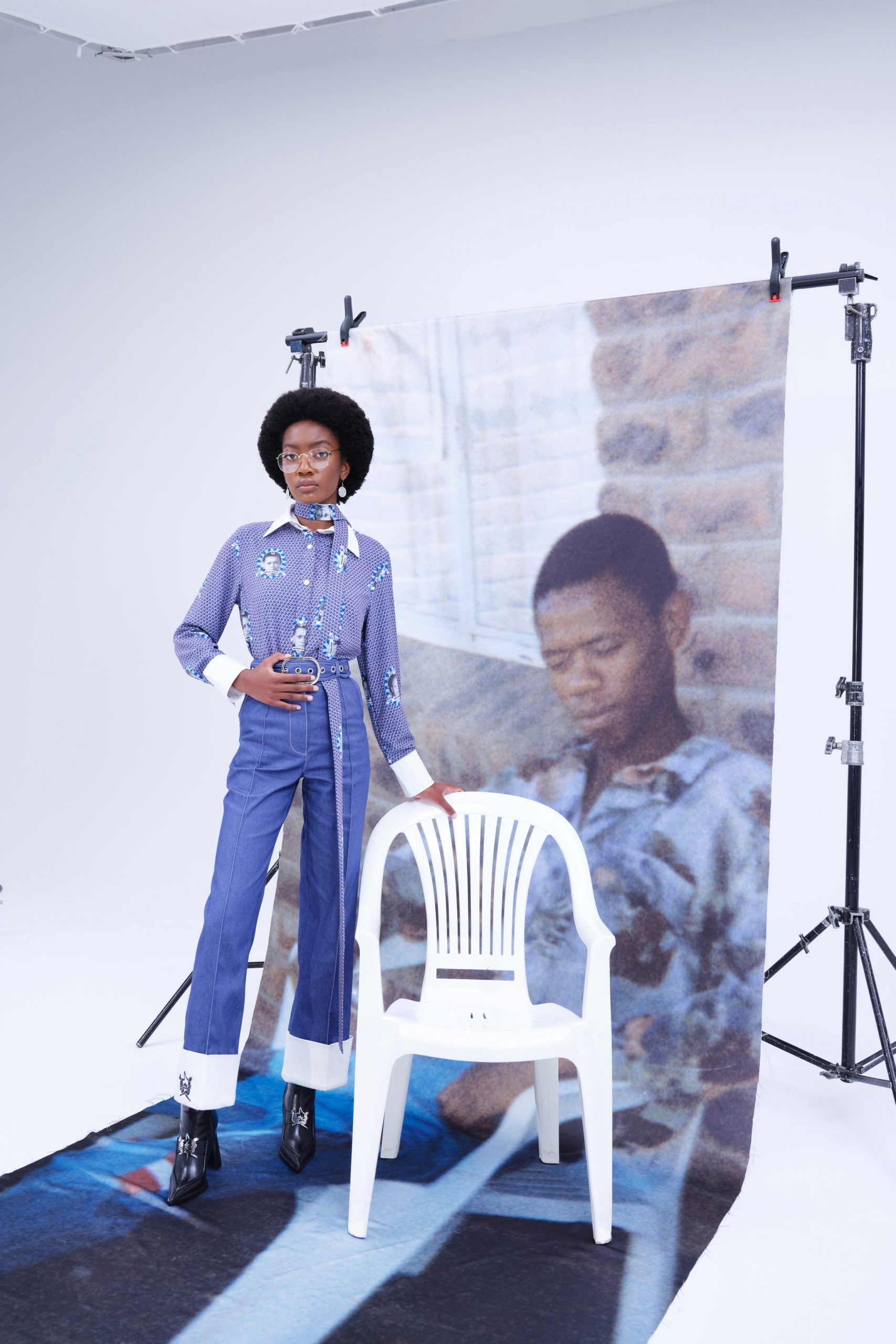