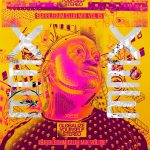 You mentioned that this is the first mix you have ever done for a South African platform? What’s special about this one?

Bubblegum Club has a fringe vibe and edge that I have a natural affinity with being in a similar space in my medium. So I knew I could curate unusual music without getting too much flack about taking such liberties sonically.

Can you tell us a bit about the mixes you have done before?

My first mix series was called Soundtrack to the City. I’d do an overview of the sounds that inspired me that year and put that down in a mix. Print and distribute a few CD’s, when Soundcloud came out I jumped onto that. I then started the GYS with Sakhile and Thulani in 2013. We were on our own in terms of social connectivity and access to creatives so the job of filing up the platform with content fell on my lap since I was the Dj component in the project. Luckily I had been collecting music since I was a teenager, a vast portion of which was unplayable at gigs due to the experimental nature of the music. I never stopped collecting this type of sound so when the opportunity to output came I threw everything I had into molding the GYS sound.

GYS have published about 400 mixes on Mixcloud prior to this? Please could you recommend a follow up GYS mix to play after listening to this.

Well I returned to playing Vinyl in 2017 after a decade break from the format and I must say I returned with a different sense of appreciation as I previously saw it as a medium which stored deep house and techno 12 inches at the time. I’ve now started collecting the wider ranges of sound that I was always interested in on Vinyl and also inherited a decent SA Free Jazz and Soul collection from my uncle to help me on my way. Sound really has a magical quality on the format so I recommend a set I played at Sunday Edition in Cape Town.

Please tell us a little bit more about Globalize Yourself Stereo?

GYS is a Cape Town born idea that came about from a need to give the Internet Age South African experience a unique voice in online radio. The show has always focused on juxtaposing African musical influences with various cultures from around the world. Creating a unique meeting point between the vastly unexplored African sonic landscape and similar spirited sounds from around the world. We now have stand-alone shows and branches curated by Dj’s in Vienna, Warsaw, Derby and Singapore.

What would you say is the best time of the day to put this mix on?

It’s a long and varied electronic music presentation so it covers different feelings or times within a day. The way I package audio is for it to suit a state of mind rather than any particular time of day. With that being said mornings and late afternoon (magic hour) vibes work best with this mix.

What percentage of South African music is there in this mix?

About 40% of the mix comprises of SA music and producers that are friends and collaborators that I’ve worked with or have future projects planned with so this is a friends of GYS showcase on the local and international front.

Lastly. Whatʼs next for GYS?

We had no intention of being a full on radio channel starting out so we now having to structure GYS as a standalone platform and service which requires extensive web and app development and also point it towards SA and the African continent more deliberately. So we are looking at branching out into the continent and diaspora to further explore what other interesting sounds and people lay hidden beneath the filter of mass appeal.

If you are in Cape Town this December, you can catch Xee playing an all vinyl set at Half Fool #1