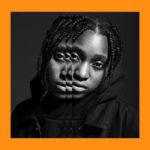 Image courtesy of the artist

UK MCs are straight up killing the game at the moment. Literally everyone has heard of Skepta and the Boys Better Know crew, Stormzy’s ‘Big For Your Boots’ just hit 23 million views in under 3 months, and for those of you who have been sleeping, we recently introduced you to Lady Leshurr. Whilst their American counterparts are mumbling through hooks, Brits are bringing the fear back to rap with grit, grime and in the case of Flohio, ‘Dirt’.

‘Dirt’ is the latest single from the 22-year-old rapper representing south London’s TruLuvCru. It’s a menacing yet uplifting track from a woman who sounds like she could mug you, but instead actually works as a graphic designer when she’s not rapping. Originally from Nigeria, Flohio found her love for rapping when her family moved to south-east London. Judging from the chorus, ‘Dirt’ is an ode to growing up in the south and the spirit of those streets instilled in her. “You can tell by the way that I get back up// Been pushed down but I never got stuck // Dropped out of class, still classy” she spits with conviction over a minimalist industrial type beat that Kanye would be into.

At the end of the day, the song is about rising above your circumstances. Something many rappers have touched on over the years, but Flohio does it with a lot more conviction than most. She’s a straight-talker and there’s a ferocity to the way she raps that makes me believe her. While south London is half a world away from South Africa, there’s a relatability to ‘Dirt’ that almost anyone will get. I mean, who hasn’t fallen and gotten back up? If you’re currently down in the doldrums, and you need a little help, maybe ‘Dirt’ could be your Rocky montage music out of it?

Check out her powerful live performance of ‘Dirt’ for Noisey’s “The New Breed”.

And here’s the studio version.