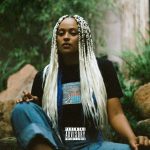 Singing and writing have always been a part of Witney Stander’s life, but it wasn’t until 2018, her last year at university, that she decided to take music seriously and began releasing music as Witney. “Once I left high school I couldn’t write. In my last year of varsity, I started writing again but I don’t know why. I started writing songs which I could never do before. I thought let me just see how it goes because I didn’t think I had a voice.”

Witney.’s first single, the “Daev Martian” produced “Ren’z Interlude”, was initially released on SoundCloud and helped her gain traction in the industry. “SoundCloud is the place to be, especially as an upcoming artist. I put all my music on there. It’s a good place to build a community. It launched me.” The platform has become the home to all her music, featuring tracks that aren’t available on Spotify or Apple Music.

An example of this is “Motherfucker Why?” produced by Kevin Blacc. Initially meant to form a part of her debut EP ‘I Wanna Make Beautiful Things, Even If Nobody Cares’, but because of the use of samples, she decided to release it as a standalone. The EP itself, coming in at 4 tracks, was created in a day at Kevin Blacc’s studio. “I met Kevin in December and we had a session in February. He made beats specifically for me. We just recorded whatever came out and built on that. One is a full freestyle. The last one was made after we had recorded… We didn’t intend to make a project but then we listened to it at the end. That same night when we’re recording I took the photo for the cover art.”

The project features the catchy track “Pi$$a (Interlude)” that uses pizza as a metaphor for working for what you want. “We were eating pizza when we made Pi$$a. Up to that point, I’d been writing songs about love. It was a challenge. So, I tried to personify pizza. It’s to do with energy and what you put out into the world and what you want for yourself.”

With a sound that is alternative, dreamy and soulful, Witney. draws influence from the likes of IAMDDB, Erykah Badu, Jill Scott, Alex Isley, Little Simz, Mura Masa, Yazmin Lacey, Lauryn Hill and Jorja Smith. Basing her songwriting on freestyles and building on them from there, Witney. enjoys creating music as organically as possible and is looking to start producing her own music in order to further create in the moment, rather than waiting for beats.

A regional finalist of Sportscene and Puma’s ‘Put Me On’ competition which saw over 3000 entrants, Witney. says the experience was difficult but rewarding. “Everything was a little fast and impersonal. I’m anxious around people. The experience was frightening but showed me how the industry is. It was very educational.”

Witney. has a number of singles coming out over the next few months and she is especially looking forward to her feature on an upcoming Jillz Mijiga production. “I met Jillz Mijiga who produced ‘Move for Me’ with Cassper Nyovest and Boskasie. He was producing for a mutual friend and asked me to come to his bedroom studio. The song we wrote together is called ‘Open Your Eyes’ and was written in February so I was still writing love songs. I was going through a break up at the time so I decided to use that. It’s very summery and happy but the lyrics are not that.” An album is also on the horizon, though only next year, as Witney. wants the body of work to be substantial and meaningful. As the young artist continues to grow, one can only expect great things from her journey.

Francis Jay Makes Music to Break Up to

Nodiggity are Audio Visual Curators for the Lovers