Helena Uambembe’s practice is personal and particular. As an interdisciplinary artist, she uses performance, photography and printmaking to recreate and reposition the history of the 32 Battalion —the infantry Battalion of the South African Army Founded in 1975. Uambembe draws on her own history rooted in the small North Western Town of Pomfret, where she was born (of Angolan parents) and where her father was recruited into the 32 Battalion. Once the home of the Battalion recruits and soldiers, the town has glided into a ghost town as it is slowly becoming deserted and forgotten.

In an attempt to understand her family history within the bigger context of the country’s history, Uambembe wrestles with painful memories, absences and erasures.

This history is personal because it affected my parent’s life and subsequently my own life. In doing research I found that the black men and women who were the lifeline of the Battalion have been erased in the archives. I find it necessary to document and preserve these untold stories of the recruits, many of whom are now dying.

Uambembe is a member of the collective Kutala Chopeto with partner Teresa Firmino. The pair presented a paper on the 32 Battalion at the 2016 Black Portraitures Conference ,which took place in Johannesburg. In 2017, they visited and interviewed the former Commanding Officer of the 32 Battalion where he showed them images of the soldiery—these would later become the starting point for Uambembe’s series of lithography prints in her body of work; Confidential Histories. Uambembe uses this technique as a medium of creation to rupture concealments into revelations.

Lithography is a sensitive technique that requires a lot of water (as the paper absorbs the ink). It allows for more archival and old-looking prints. Every mark on the images gets transferred, even the tearing, folds and wrinkles are transferred. This technique became my natural reaction to the interview and the secrecy around the images and the 32 Battalion. I also made use of a linocut of a buffalo head—which is the insignia of the 32 Battalion. The linocut serves as a stamp, in an attempt to certify the history.

Uambembe’s work is probing and experimental; her 2018 piece, Can you hear me, uses archival imagery of Angolan leaders Jonas Savimbi, Agostinho Neto and Holden Roberto, where she inserts her shadow against the backdrop of the three leaders in what becomes an agonising image representing millions of Angolans who have suffered at the hands of war.

Uambembe’s work is a piecing together of fragmented and fractured histories resulting in images with sharp edges, hollows and a stark sense of melancholy. The 32 Battalion becomes a master narrative she uses to investigate and explore the past. Fragmented pieces become a way of mending and compressing time while weaving together ideas around home and identity.

Within the history of the 32 Battalion there has been a constant struggle with notions of home, identity and memory. The 32 Battalion have had two major moves in terms of home; the first being when they had left their home country, Angola, to move to Namibia. In Namibia they were placed in the middle of nowhere. The second move was when they had to leave Namibia 1988/9 to South Africa. Again, they were placed in the middle of nowhere – a town called Pomfret, on the edge of the Kalahari, where the closest town is 200km away. For the community home was never a place but the people you have around you. 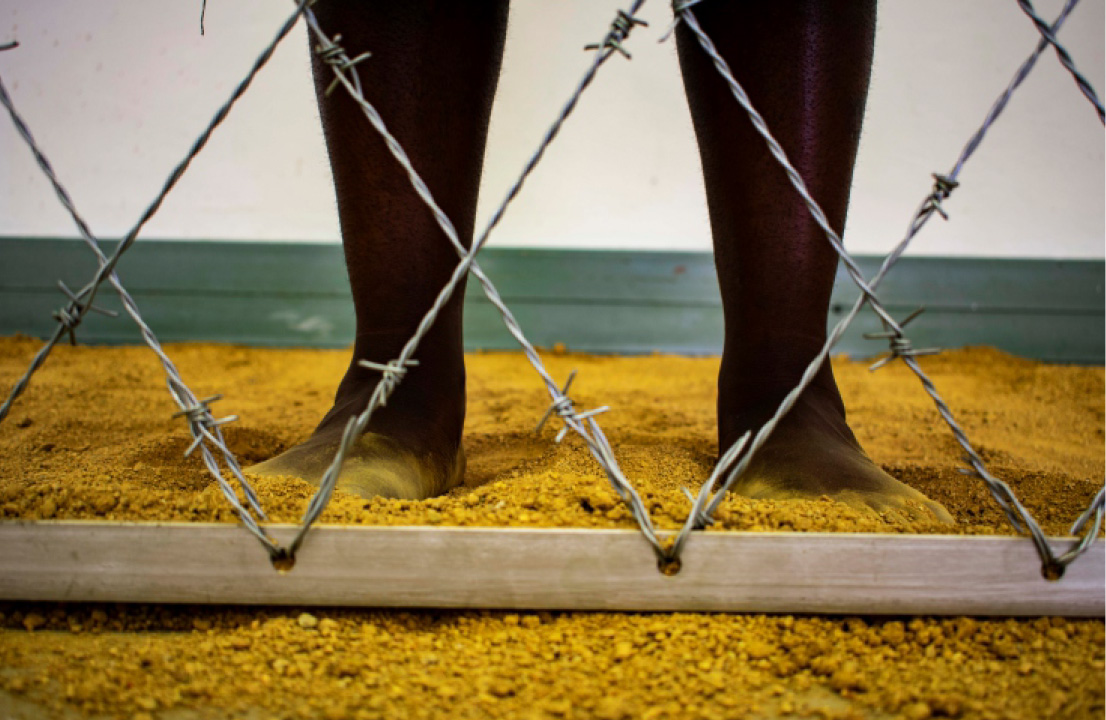